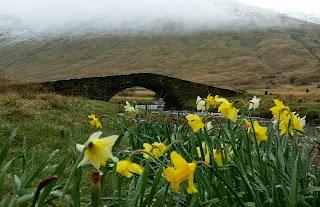 This prominence on the Southern Upland Way is reached easily from Daer Reservoir, a short distance from Watermeetings near the M74 motorway in the Moffat area.
I had started walking by late morning thanks to an early start. I didn't hear Alison go out, but unless it was her hologram that served my bacon buttie at Lochgilphead petrol station at 7 am she must have left quietly whilst I was dead to the world.
The highlight of the first part of today's journey was meeting a penny farthing cyclist beside Loch Lomond. Very impressive!
It was good to escape from the rain and the spray on the M74 for a couple of hours for this 8 km stroll under a thick cloud and a (literally) watery sun. As previously on this trip my selection of a summit of modest stature - 569 metres in this case - gave me a cloud free experience in pleasant surroundings. A view from near the summit, taken in between energy releases from an Arctic sleet blasting machine, is shown in the top image. Not shown are the ghostly rows of nearby wind turbines, mostly silent and unmoving despite the breeze.
The bottom picture, taken near the Rest and Be Thankful pass, was inspired by Alison's 'on hold' Bridge photography project. She spent 2014 posting a picture of a Flowering Plant every day; this year it's 'The Natural World'. Her pictures are excellent and she reckons the process has significantly improved her photographic skills. Well done Alison, and thanks for putting me up and feeding me last night.
The weather improved as I pottered on in a southerly direction, arriving home by 5.30 pm after a satisfying and successful little 1100 mile trip, on which it was great to spend a bit of time with a variety of friends as well as climb a few hills that were new to me.
Posted by Phreerunner at 19:16

Bit of a contrast to the mid-summer conditions in which we found Hods Hill and its surroundings a couple of weeks back!

Yes, it's back to wintry conditions with low lying snow in the Highlands!

Great to see you last night. Looking forward to keeping up with your TGO Challenge this year. Thank you for your kind comments. xx

Thanks Ali - it was good to see you as well, and I had a good trip home.