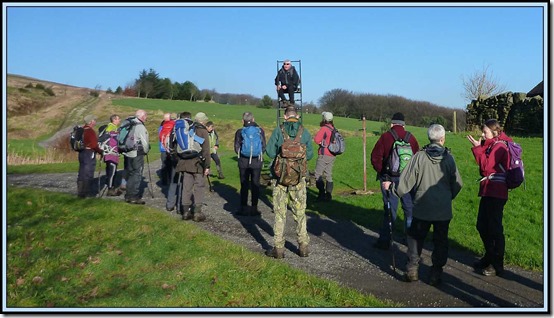 My ears were burning as I drew up at Affetside for my first outing with The Plodders since last April. Times have changed since then. Norman has a Kindle Fire and can access the internet! He’d been extolling the virtues of my report on his Breath of Fresh Air walk around Lancaster.
Plodder Walks seem to be evolving back towards mainstream LDWA walks, today’s outing being the best part of twelve miles. My last ‘Plodder’ walk was a mere six miles. Numbers are up. The regulars (Don, John P, Neil, Phil, Barbara Peter and others) have been joined by some new faces, including Chris Langabeer, today’s leader. He delivered a ‘welcome address’ from a pedestal near Affetside’s medieval cross. 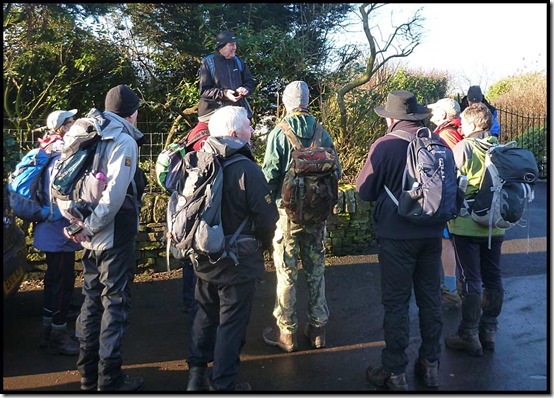 Affetside is at the top of a hill, so the only barrier to quick progress down to Jumbles Country Park was the incidence of a number of stiles that paused the progress of the 21 stumblers plodders.
Neil was full of beans (or whatever else he had for breakfast) at this point, but later he had extracted all available nutrients and needed a short cut to get back to the start. 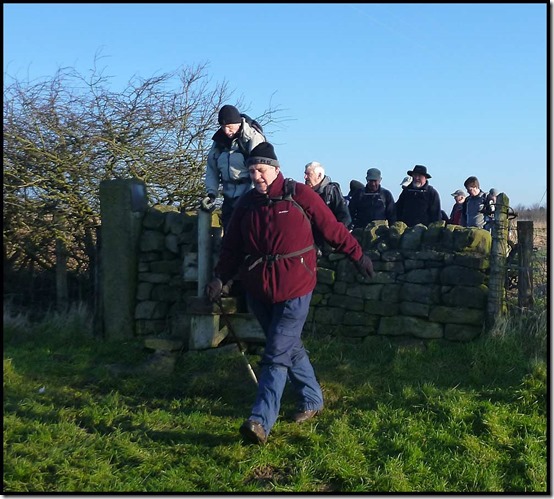 Since I last saw him, JP has honed his body to a suitable shape for LS Lowry to copy onto his easel. (He’s dead, John!) 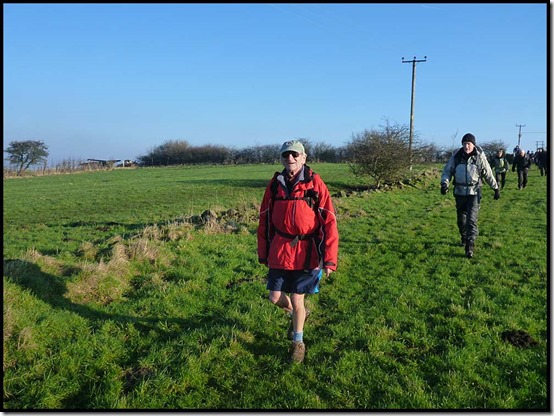 It was another ‘Blue Sky’ day, perfectly clear, with the low sun casting long shadows as we progressed along surprisingly mud free paths to Jumbles Country Park. 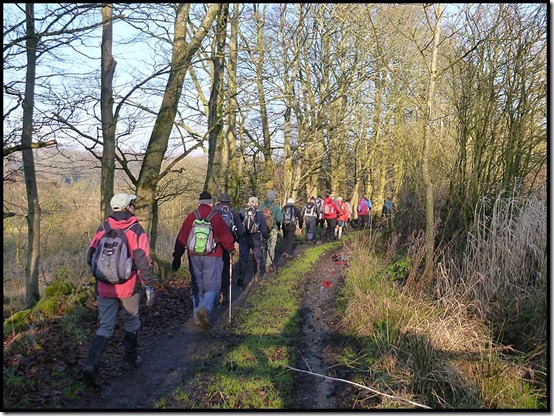 The grass on the dam at Jumbles Reservoir was a vivid green in the bright sunshine. 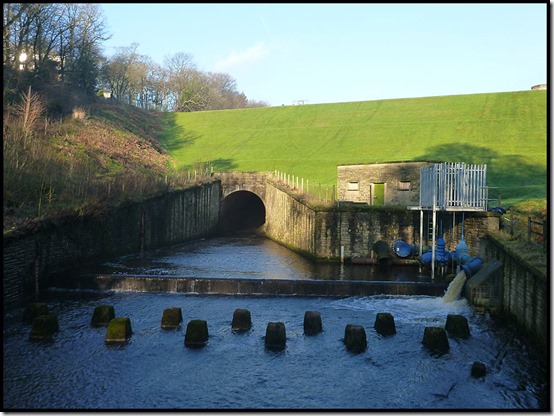 Norman has been seen here before. Note the piping system has been changed since this visit in November 2011. 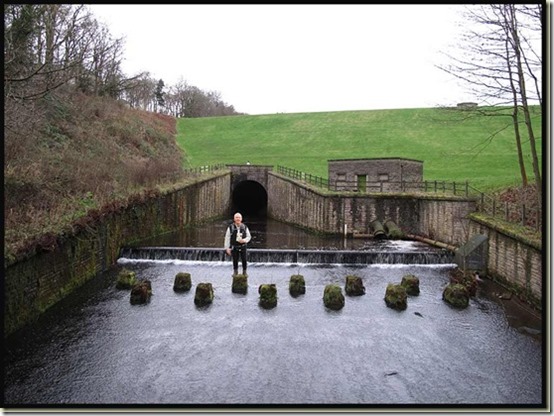 After pulling Norman out of the mire (again) we soon found ourselves strolling down a pleasant lane strewn with No Parking signs. 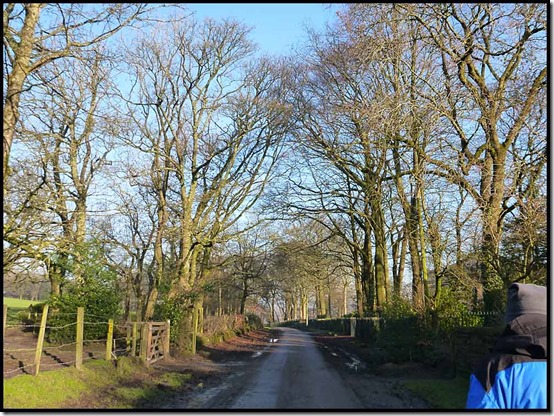 Chris seemed to spend much of the day leading from the rear. “I know the way” cried the four-eyed monster out in front. 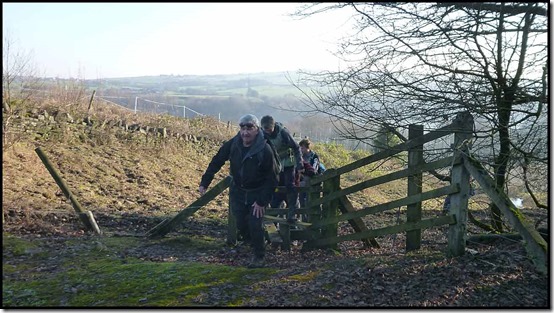 This ornate foot-tunnel is of great benefit to the residents of Horobin Fold, if they want to visit their friends at Torra Barn (or vice-versa). Don and Norman just enjoyed playing hide and seek in it. 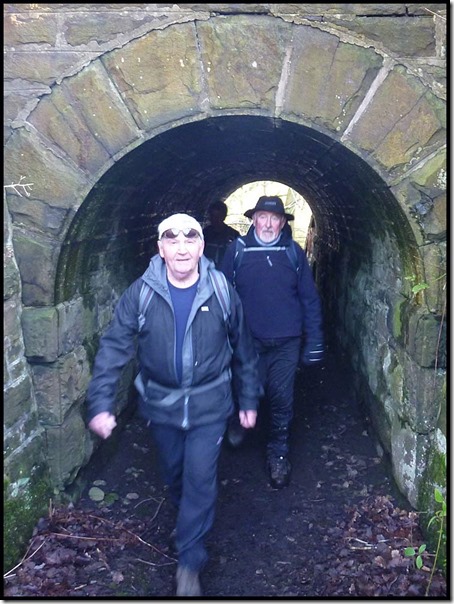 Our route joined the Witton Weavers Way for a while. The section below was boarded, so as to avoid a deep bog. There were however numerous complaints about the slippery nature of the boards, perhaps because the plumber at the head of the line was emitting a viscous fluid. 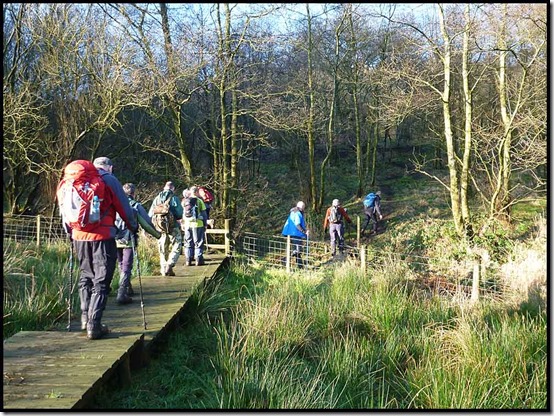 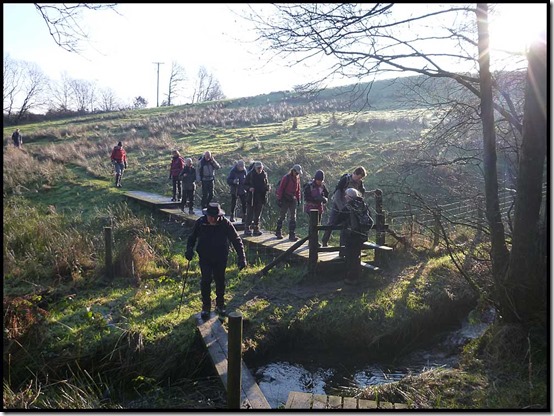 “Sorry about the snot on the boards” announced Norman, “watch me dive into this pool of slime.”
“Take your sunspecs off” advised Don “- it’s grass, not a pool, and the path isn’t that way.” (“You Stupid Man!”) 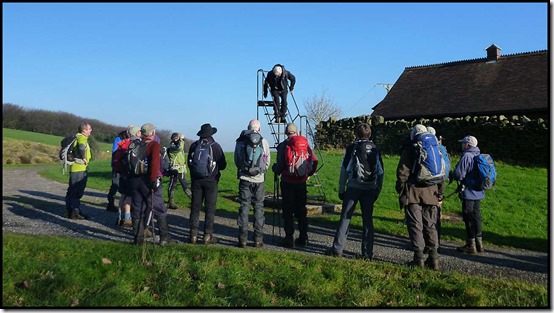 Norman did eventually park his bottom on the top step (see picture at the head of this posting) and make an important announcement – something to do with the ongoing conception of his great grandchildren, in an attempt by his family to outnumber any other in East Lancashire.
Turton and Entwistle Reservoir was serene in the sunshine. A small group of cormorants was drying out on the white landing stage. 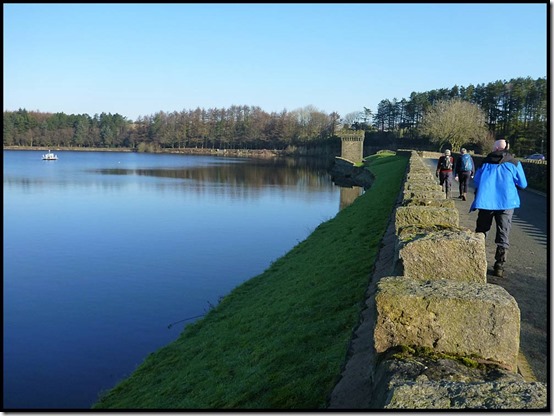 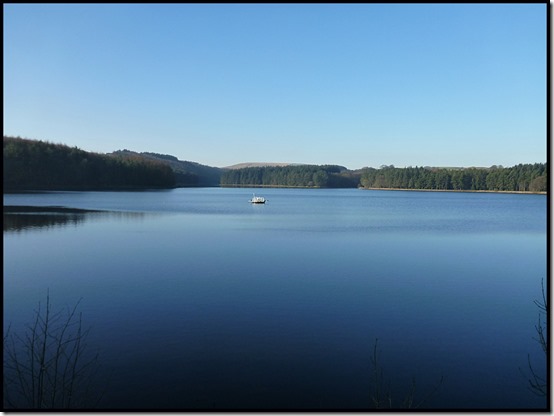 By and by we came upon the Strawbury Duck. It used to be a fine walkers’ pub. Not any more. 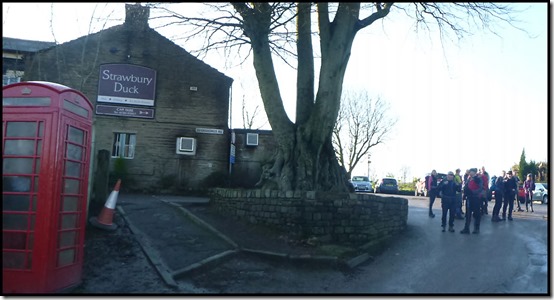 Soon afterwards Chris spotted that we were passing The Wellbeing Farm. It was past 1 pm, and he wisely decided that for the wellbeing of his Plodders, two of whom had already been burnt off by the blistering pace, a break for lunch was in order.
Norman nuzzled up to me and grabbed the last piece of cake, whilst three reprobates posed next to the sign. And what an advertisement they are for said farm! 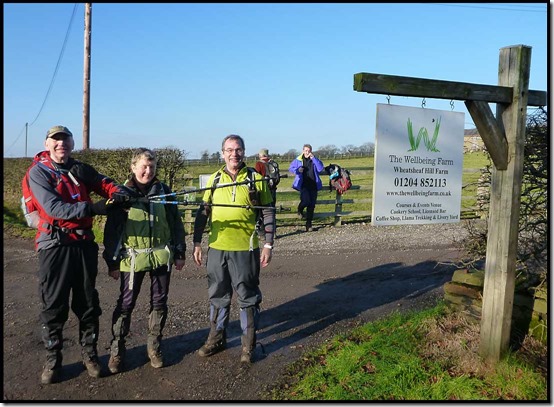 Up above Edgworth, one of the group was caught furtively examining the contents of a Post Box. 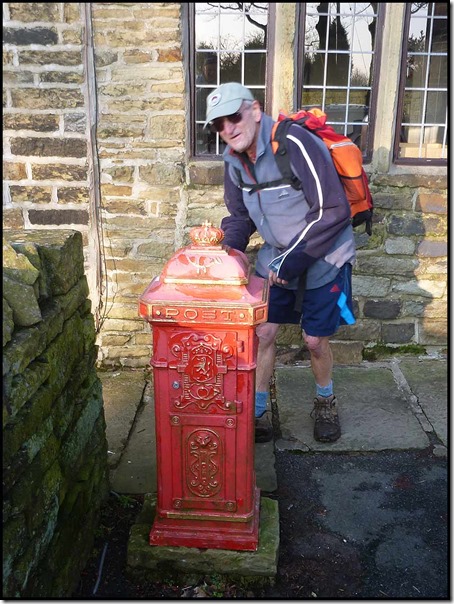 Descending through Hawkshaw, past John and Janet’s road, I couldn’t help reflecting on how sad it is that John’s health prevents him from joining us on outings such as this one. 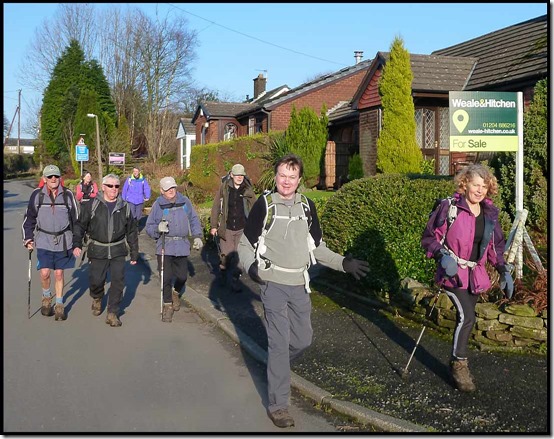 The steep path back up to Affetside was, luckily for those who needed to catch their breath, punctuated by more stiles. 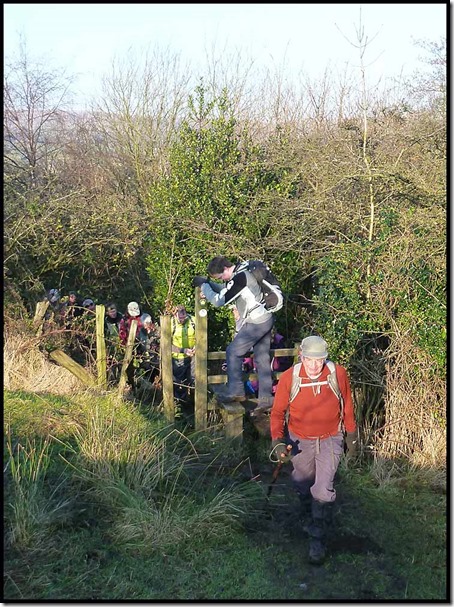 Looking back, there ‘s a fine view over Hawkshaw to Holcombe Moor. 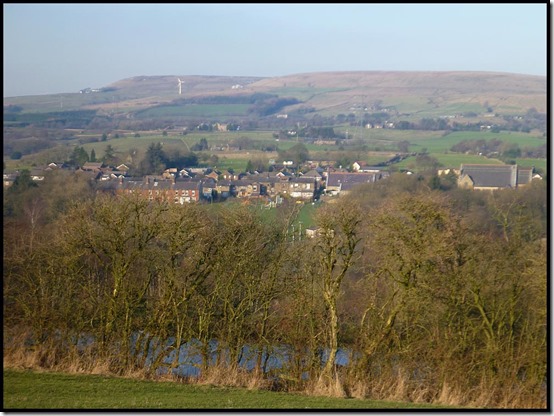 By about 3 pm we were back at Affetside, outside the Pack Horse, still blinded by that pesky sun. Some of the group went in, claiming it was better to wait until after the rush hour to get home. 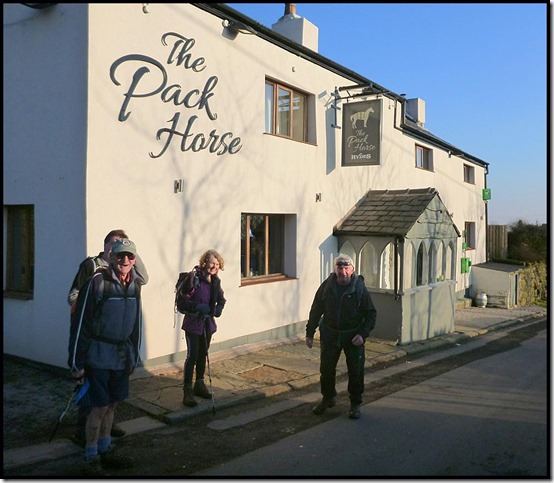 I joined the pack that were on cooking duty and had to get home before the rush hour. Phil and I paused to admire the medieval cross that apparently served as a waymarker for pilgrims travelling from Bolton (what were pilgrims doing in Bolton?) to Whalley Abbey. 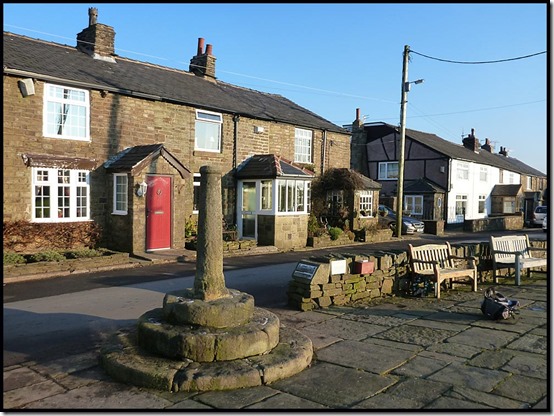 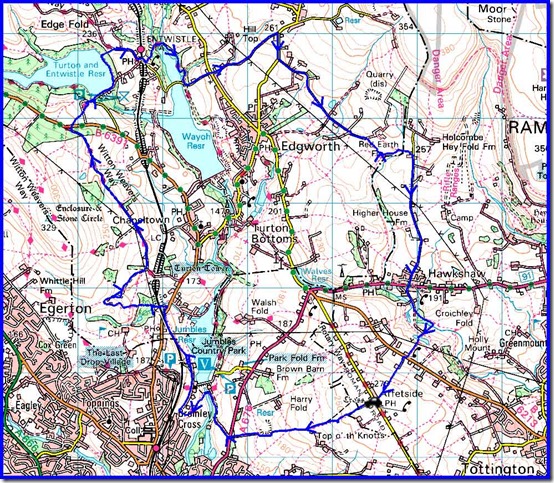 An excellent day out in superb weather. Apologies to anyone who has been accidentally maligned in the above text. I’m afraid my fading memory sometimes results in minor unintentional insults and inaccuracies, or so I’m told.
Posted by Phreerunner at 22:58

A nice walk in nice company in nice weather. Nice!


I've not been out with that lot for AGES - I really should make the effort to change that.

Yes JJ, they were asking after you...

Sorry to miss you yesterday. Will call on Monday.

Good to see they are still plodding on.