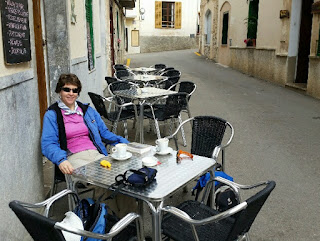 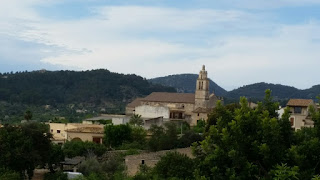 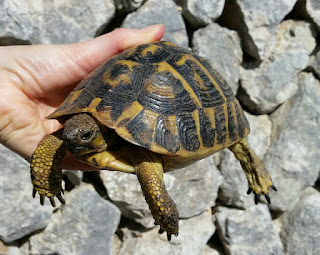 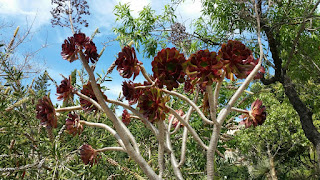 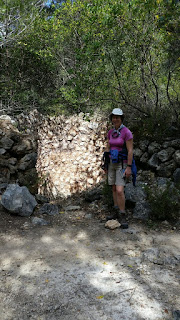 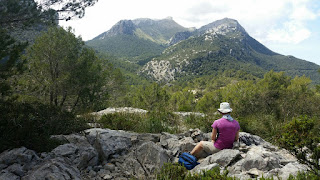 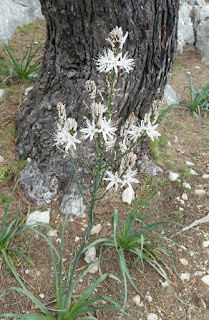 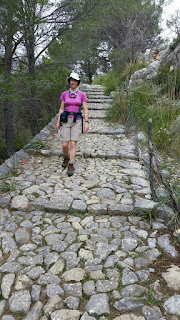 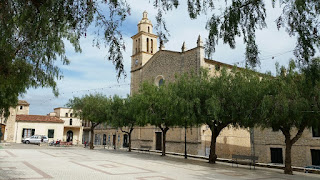 Sue and I parked just off the main square in Caimari and enjoyed a coffee outside the café before setting off at 11am on our 17km walk. The last time I was in this café was the day of a royal wedding from which some of us were ardently trying to escape.
A quiet, sunny lane took us past a friendly tortoise and an unlucky snake, then through Binibona to a rough road from which a narrow path past lime kilns led up the valley on the walk described on page 139 of the Cicerone guide updated by Paddy Dillon in 2006.
Route number 25 in that book, taking about five and a half hours and climbing a good 600 metres.
The path was pretty rough in places but easy to follow up past a ruined farm with a renovated well.
The Coll de Sa Batalla was eventually reached. Drinks and ice creams at the café by a petrol station, together with hundreds of cyclists. We saw no other walkers today, but lots of Asphodel.
The route back down to Caimari was on the excellent GR222 path - a brilliantly paved track in the style of the Archduke's pathways near Soller.
Shopping took place. Yesterday Robert dropped a bottle of wine. Today it was Sue's yoghurts that went crashing to the ground. The meal wasn't affected. A stroll was necessary later.
The evening passed. Very quickly. Hence the brevity of this entry, but the photos should convey the flavour of the day.
Goodnight from Puerto Pollença.
Posted by Phreerunner at 23:01

Careful Martin, Sue’s looking menacing in those photo’s, especially No1 where she seems to have cleared the cafe.

She was about to disrobe so she cleared the whole street, not just the café. Well spotted, she's nearly as me a ING as the mosquito that disrupted her sleep last night. I almost found her in the bath!

'Manacing' that should read...