Tuesday 19 April 2016 - Costitz to Sanctuary de Cura and back 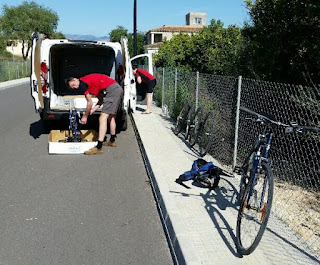 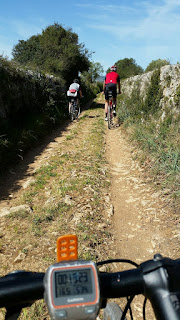 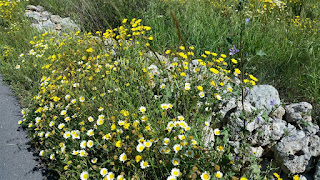 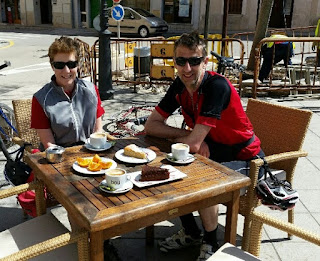 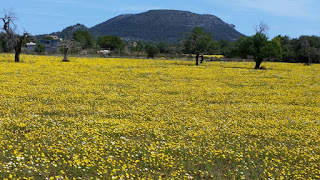 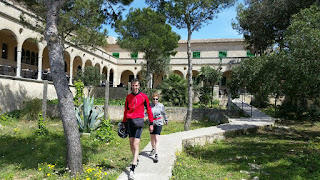 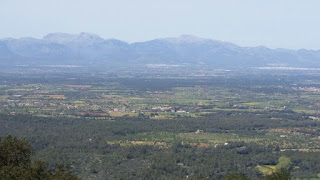 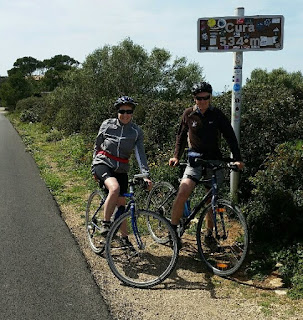 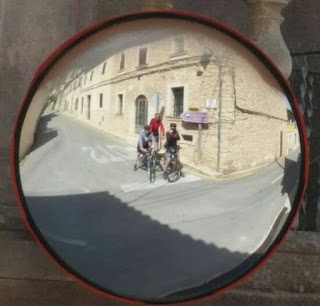 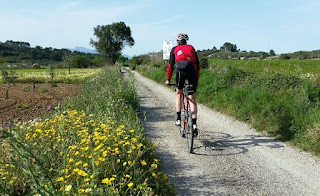 A 72km circuit with Robert and Lyn on another lovely blue sky day.

Lyn saw Hoopoes. I saw a dead snake. Robert saw flowers. The off road cycle track was excellent for our machines.
Elevenses, at around noon, outside Can Sant Café in Algaida, saw me enjoying some superb melt in the mouth chocolate cake. Then we went to Llucmajor, after which Robert led us around, rather than up to, our objective. After retracing a scenic 5 km,  we wound our way slowly up to the sanctuary. By now it was 2.30pm. Time for lunch. Ok, but less than inspiring and not very hot. Good views of the entire island from this 534 metre summit. A long descent to Montuïri was enjoyable, albeit a bit slow due to the buffeting wind. Afternoon tea and cake was taken here at 4.30 in a nice café into which we took our bikes. Robert (ahead as usual) was literally dragged off the street to prevent a competitor getting our business. More chocolate cake. We eventually found an enjoyable cycle track for the last lap of today's ride, including a steep ascent back to the van. Then we dashed back home as my rental bike - a Trek hybrid - had to be returned to Rentmarch by 7.30pm. Whilst L and R went shopping, I found Sue finishing her second beer back at the apartment. She had been up to the 1118 metre summit of Puig des Tossals Verds - walk number 30, with embellishments. Not without incident. She had a bad morning and didn't start the walk until 1pm. Mallorcans, Germans and Cyclists had all been blacklisted. As a committed European, I found this rather disconcerting. It seems Mallorcans had blocked her original route 29 and had also been rude to her in a 'parking incident'. Germans - virtually the only other people out walking - had been rude, and Cyclists, the life blood of the island at this time of year, had caused her to have to drive in first gear. "Have another beer, Sue." We then had a lovely evening, and a fine meal - possibly because I kept out of the kitchen (except to wipe the floor after the messy cooks were long gone).
As usual, the pictures should give added flavour. Click on them for bigger versions.
Posted by Phreerunner at 21:36