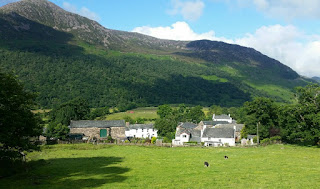 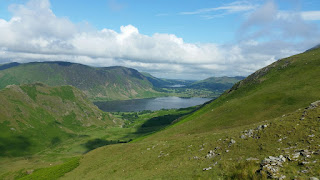 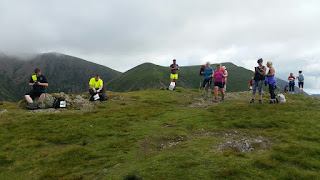 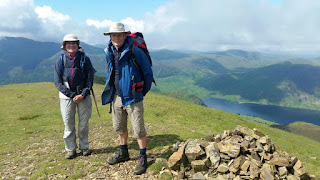 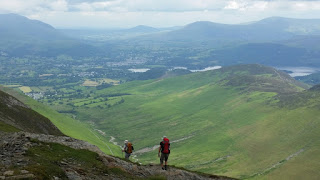 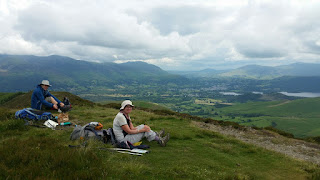 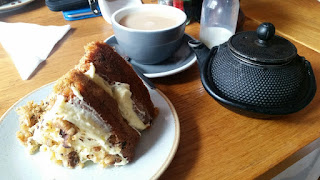 The swimmers were up early and joined us in the queue for a 7.30 breakfast. That set us up for an 8.30 departure, with Jeanette taking the road over Newlands Pass and the remaining three of us heading up Whiteless Pike. We started to meet around 500 people doing a 10 in 10 challenge. Ten peaks in ten hours. They were moving at varying speeds. Mostly Geordies.

Meanwhile, Jeanette was being passed by cyclists on an Ironman triathlon involving a 2.4 mile swim across Windermere, a 112 mile bike ride with 3700 metres ascent, and a 26.4 mile run up Scafell Pike from Great Langdale - another 1450 metres of ascent. Quite a challenge.

We left the 10 in 10ers on Crag Hill. They were coming from Sail. We were going over Eel Crag to Hopegill Head. Here we encountered a chap manning the second checkpoint of another fell race. It was warm and sultry on the summit. Lots of midges. Otherwise a delightful spot. He told us there was yet another fell run on today, with Joss Naylor running a challenging route to Honister, presumably in celebration of his 80th birthday.

In fine but increasingly cloudy weather, we headed over Grisedale Pike and down Sleet How to a point breezy enough to keep the midges at bay, but warm enough to make do with light fleeces.

Then it was over Kinn, our 34th and final summit of this little jaunt, and down a woodland path past Orange Hawkweed (aka Fox and Cubs) to Braithwaite.

The path to Keswick via Bog House and How Farm came with notices warning of damaged and missing bridges. Ignoring the warnings, and the frequent 'Bull in Field' signs, it soon became apparent that they constituted a means of deception by a farmer in an effort to exclude walkers from his land. The only problem encountered was actually finding the route of the overgrown path at one point.

Anyway, after admiring the views to our earlier route across the tops, we soon reached the Cumbria Way route at the point of a sturdy footbridge over the River Derwent. Keswick high street was shortly under our soles, and our rendezvous with Jeanette was followed by celebratory tea/coffee and cake. We must have looked hungry. I was served what appeared to be about a quarter of a carrot cake.

So ended this pleasant jaunt in the best of company. Thanks, everyone, for coming along and for putting up with my occasional 'meanders'.

Index and Slideshow Links
Posted by Phreerunner at 09:42

Enjoyed that - particularly as some of those hills are so fresh in my mind.

Thanks Gayle, it was the Lakes at their best, in good company. I appreciate the text was rather 'pedestrian', but hopefully the photos conveyed the ambience. I shall enjoy editing the pictures into a little slideshow.

You must be off to the Pyrenees soon - you'll really enjoy the second half of GR10, especially if you 'stray high' at times to avoid the horse flies.

Joss was doing a 30 mile run from Caldbeck to Wasdale for the Brathay Trust. Fantastic effort at 80 years old.