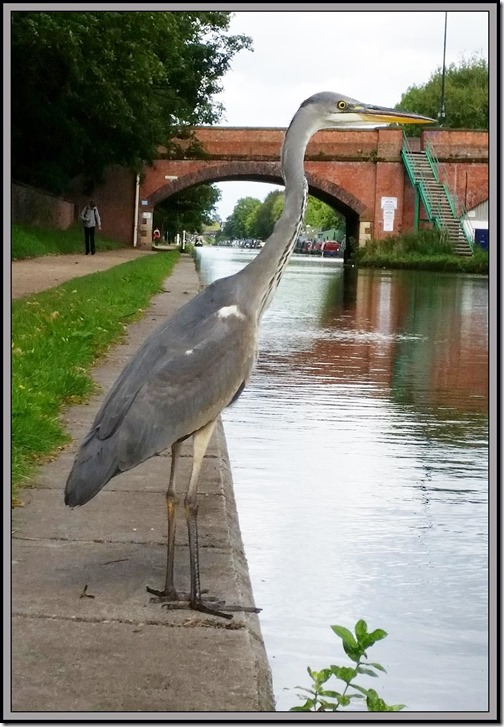 My first entry on these pages relates to a walk called ‘The Altrincham Circular’, devised with the aid of then Timperley resident Benny Rothman in 1987 as a WEA (Workers’ Educational Association) project. The description I gave in October 2007 was very brief as, like today, I was in arrears with my entries – a familiar situation. Slightly more information was given in my report on the walk undertaken on 20 February 2010.

The weather in Timperley was brilliant last week. That’s my excuse for allowing these entries to build up an arrears.

Never mind, it’s an overcast Monday morning, so I’ll take a punt at catching up.

With the ‘Altrincham Circuit’ in mind, I wanted a fairly energetic morning walk from home, so I plotted a route approximating to that shown below and put it on the phone so that I could easily check my progress.

Starting before 8 am I soon realised that despite it being a lovely day, I was going to get scratched and soaked, thanks to rampant brambles and a shower in the night. Our resident heron gave me a rather condescending ‘you must be stupid’ look as I passed by.

I more or less followed Benny’s route through Timperley to Brooks Drive, where I chose a path that follows Fairywell Brook through Roundthorn. Despite being just a few metres from Wythenshawe Hospital, this path proved quite challenging, with soaking foliage laden with thorns blocking the path. Wythenshawe Jungle!

Instead of following Brooks Drive all the way to Hale Barns, I ducked and dived along some field paths with deep, wet grass, finally emerging in more grass beside junction 6 of the M56 motorway. This field path led to a ginnel into housing that led quietly and dryly to this typical ginnel at the junction of Rivermead Avenue and Bank Road. 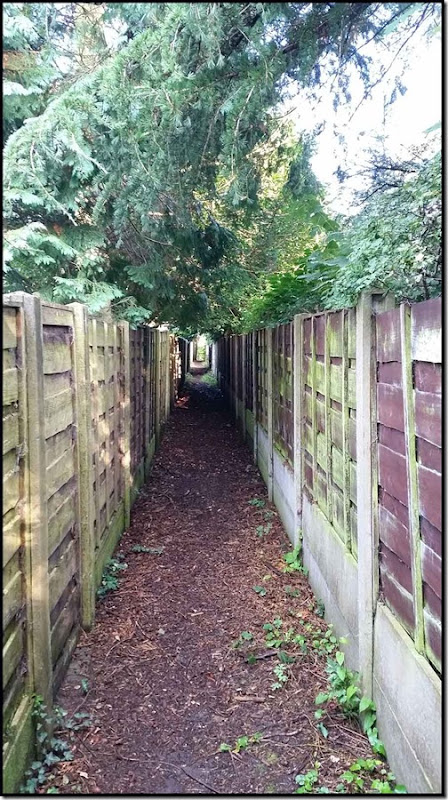 My route then skirted Hale Golf Course and led me into the Bollin Valley, where shafts of light beamed through the tree canopy giving the aura of a magical place. Between Warburton Green and Dunham, many miles further on, I encountered only one person – a certain Roy Keane walking his dogs in the Bollin Valley. (Readers who have heard of Mr Keane won’t be surprised at his choice of dog – alsatian.) 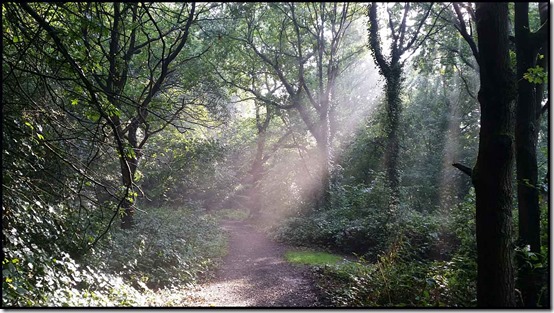 Beyond the Bollin Valley a host of field paths like the one shown below guided me through pleasant Cheshire countryside under a hot sky. 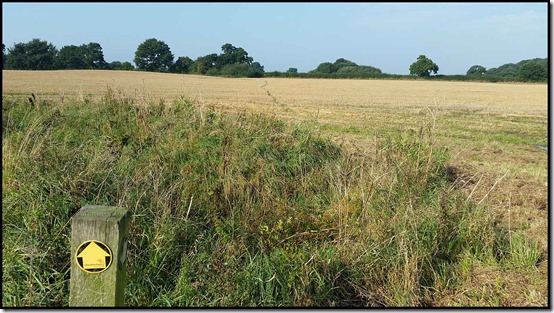 Some field paths are better marked than others, and a 1:25,000 scale map is a big advantage on this walk. A level crossing at New Mills, near Mobberley Station, led me past some enticing tea rooms to Pepper Street and a path across a dodgy bridge towards Kell House Farm. The picture doesn’t really show it, but this slime coated structure slopes at an alarming angle. People like HMP3 and Mike and Marian Parsons* shouldn’t be allowed anywhere near it. 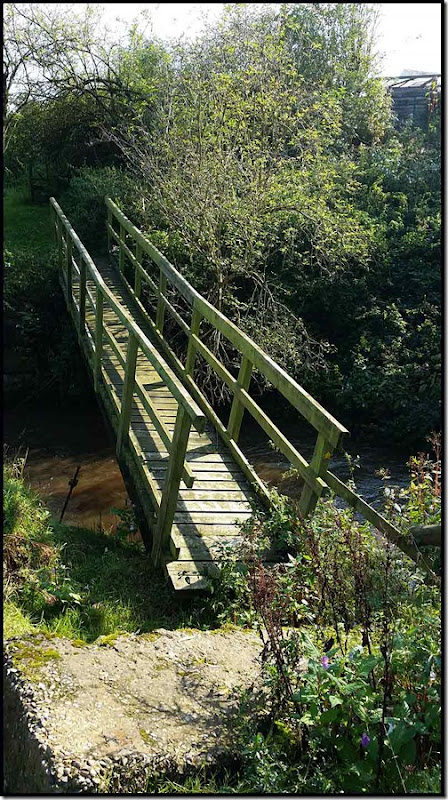 More field paths led to Arden House. I recognised it; I’d been there before. 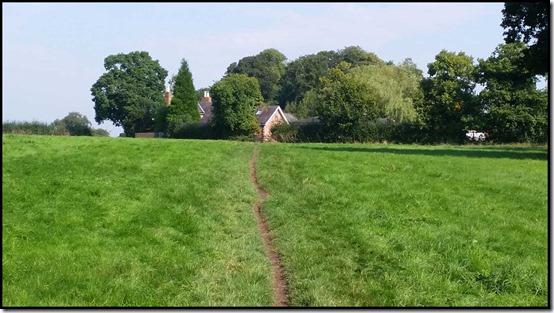 I decided to avoid the extensive area of road works at the A556/M56 junction and headed to Bow Green Road in Bowden, from where I thought a path would lead me past the Home Farm and into the grounds of Dunham Massey. It did, but not until I’d climbed a large, white, securely locked, spiky gate.

Once over that barrier, I started to encounter humans again, as well as ducks on Island Pool and Fallow Deer snoozing outside the big house. 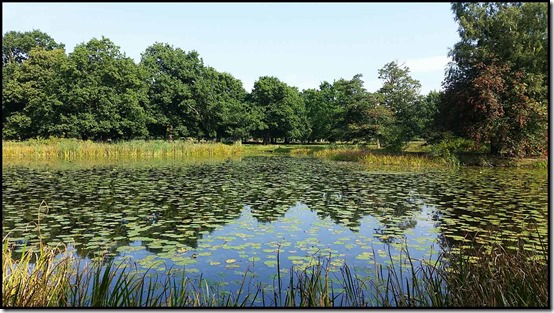 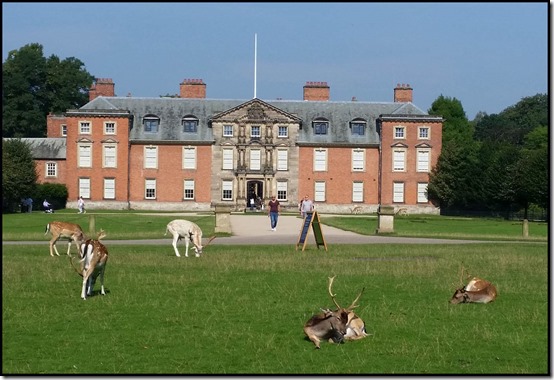 In Little Bollington the River Bollin was rushing over the weir a little more energetically than usual. 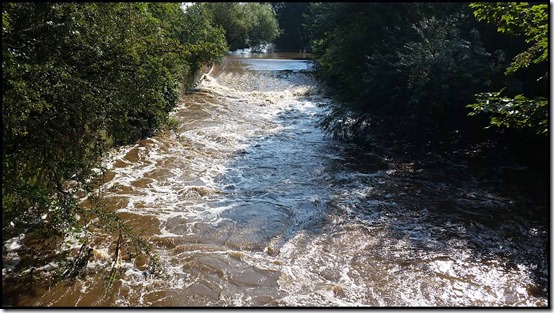 Dinner was needed, so a short diversion to Little Heath Farm shop was in order, soon after I’d joined the Bridgewater Canal towpath. 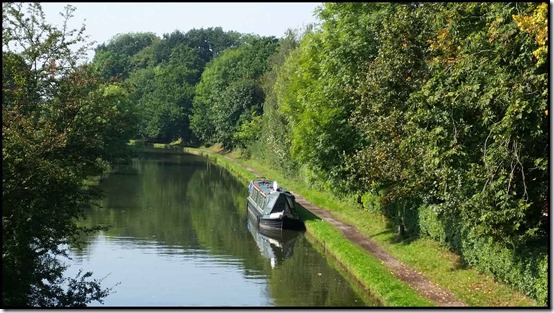 Another diversion to Asda in Broadheath saw me leaving the towpath for a change and making my way back home via a variety of ginnels, side streets and meadows.

This walk could easily be undertaken over the course of a whole day, but for me it was a morning outing at a brisk pace of about 10 minutes for each kilometre (4 mph) – 34 km with 300 metres ascent, in 5.5 hours. The route shows more clearly if you click on the picture, but feel free to design your own…there are many paths to be discovered. 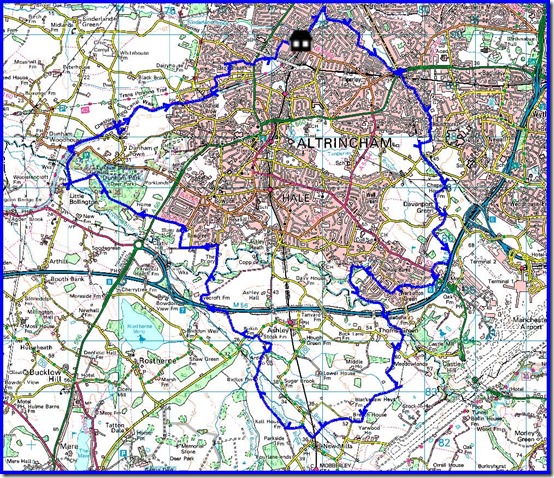 * These are ‘accident prone’ people from whom squeamish readers should maintain a wide berth, HMP3 being the latest ‘stumbler’ having recently suffered a ‘fibula trip’ in the French Alps.

I find your heron photo quite disturbing
Still...can't help but keep looking at it....
Hazel

I think he's got used to 'stupid man taking more photos of me' and he now just looks on disdainfully. I didn't quite get the angle right, but if I'd gone any lower he might have had one of my eyes for breakfast!

Thats some Heron, more like a Stork!
34km, wow, i havn't done mileage like that for a long long time.

That's my mate Alan, he has Canada Geese for breakfast!

The following day's walk, to be reported on imminently, was quite a contrast, albeit more tiring!

Inspired by our chat at the Courtyard about this walk, we went for about half your distance last Sunday (some of your readers have jobs you know!) I also took a photo of haughty heron just south of Timperley Station where he proceeded to beat me in a staring contest.

Haha, the Timperley Heron is a star. There's also a moorhen around at present, and grey wagtails near the bridges. And Mandy the Mandarin has been with us for nearly four years now.

The 'Altrincham Circular' walks are brilliant at demonstrating how we can get a good country walk of any length from home in virtually any direction. (Though I planned a 'Mosses of the Mersey' walk yesterday and postponed it in favour of some Lancashire summits.

I did nearly 40 years at work before starting this blog. It's definitely a retirement project, as are many of the activities. But they do occasionally inspire people, which gives great satisfaction...