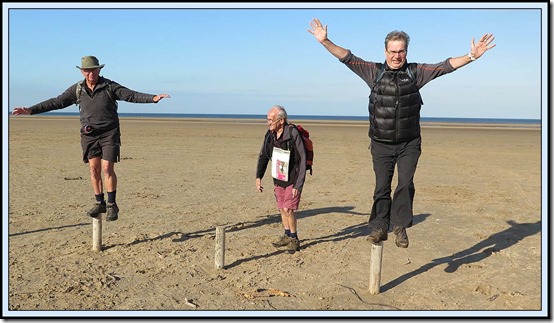 Today's team - John, Phil, Bernard and Martin, had assembled at Westhoughton Station for a train to Southport at around 9 o’clock – a bit early for most Plodders, one reason for the poor turnout. We were almost leaderless when John was found to be waiting in the car park whilst the rest of us preferred the platform. Another train took us to Ainsdale, where we headed due west from the station until the Irish Sea precluded further movement.

The idea was to revisit Stage 1 of John’s ‘36 Degrees’ walk, as he wanted a .gpx file and nobody had kept one when this route was first walked nearly five years ago. It was Stage 1 of John’s project to walk across England from coast to coast, keeping within 36 degrees of his own back garden, ie a straight line across the country to within 18 degrees each side of his garden.

We posed whilst a convenient post recorded today’s team. 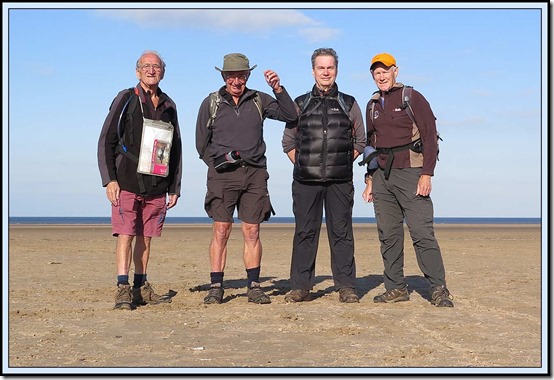 The walk soon brought us back to Ainsdale Station, from where we had set off some time earlier, and on towards a sandwich shop outside which Bernard found himself glued to the pavement. Next door was a coffee shop that duly obliged whilst Bernard selected a sandwich. It was an auspicious occasion as I’d never before witnessed Phil entering such an establishment – he usually paces around outside.

After this excellent and much needed coffee break we headed east along narrow strips of tarmac past neatly cropped fields. Some of the party were already lagging behind and single file was wise as any vehicles took up most of the width of the tarmac strips. 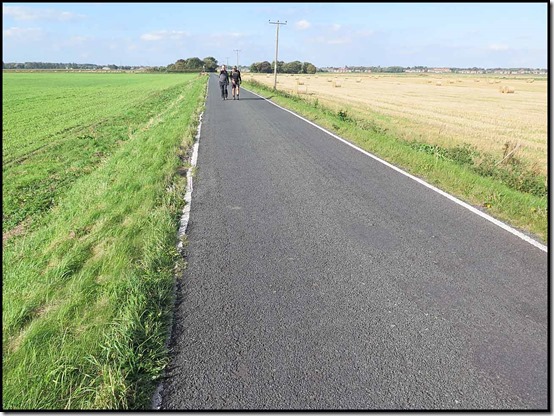 John was raring to go, loving every minute of this rebirth of his project. 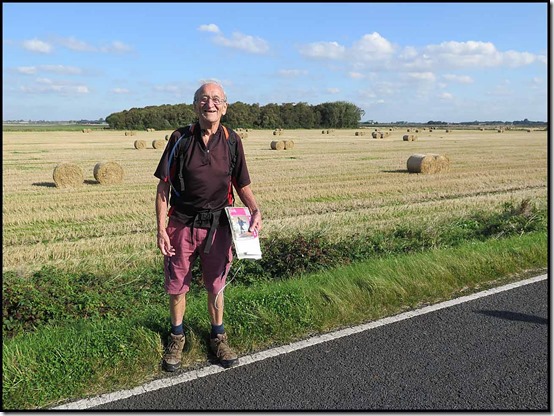 We dived into the undergrowth as Tractor Number 1 roared past. 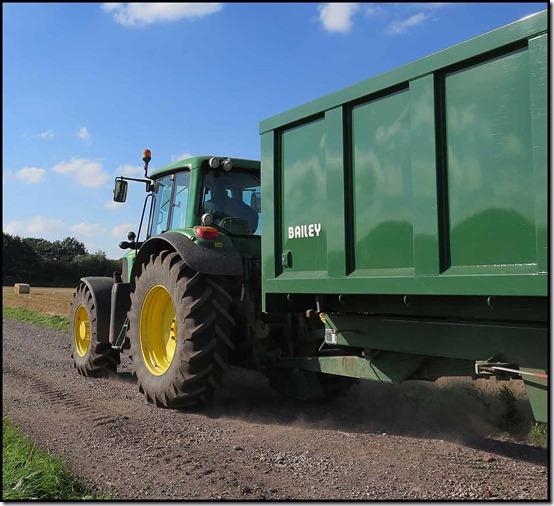 It was a lovely day with a brisk easterly breeze. By the time we reached Cabin Lane we were on a track that petered out in the stubble of a harvested crop. We soon learnt that the farmers hereabouts don’t restrain their crops from growing on the signposted footpaths through their fields. 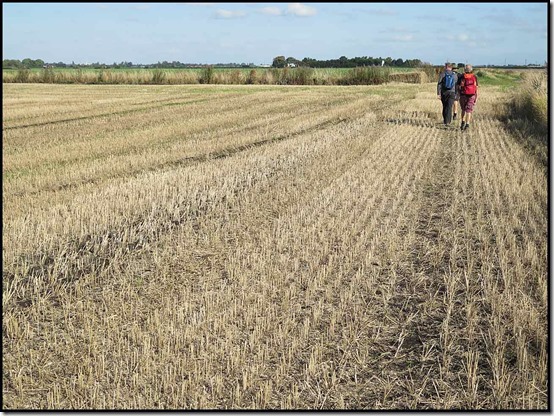 Manor House Farm was immaculate. Here we encountered Tractor Number 2 and a friendly farmer, as well as a horse and cart trapped forever, frozen in time behind a row of plant pots. The taxidermist had made a fine job of the horse. 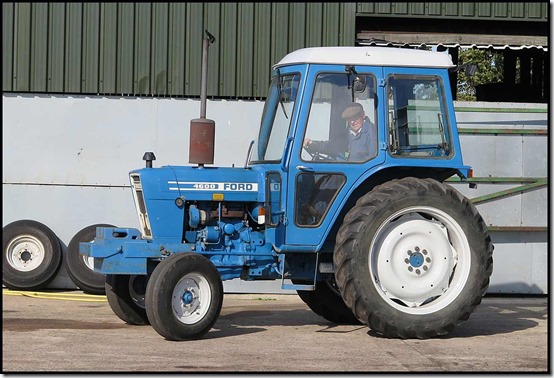 Tractors Number 3 and 4 were lazing nearby in a barn. 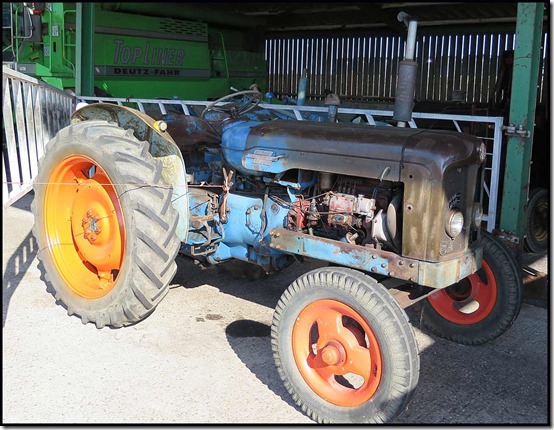 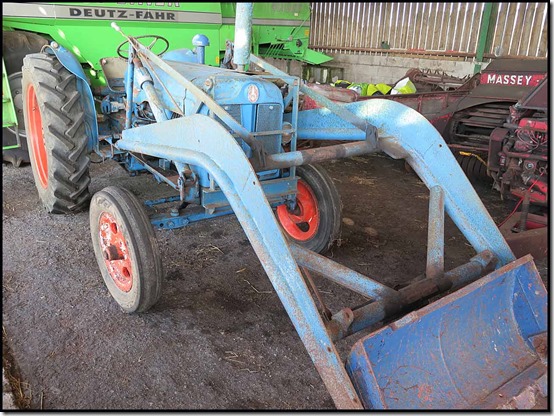 Outside the farm, Phil sang a Gloria Gaynor song to these love sick cows. They showed signs of distress when ‘The Cow Whisperer’ deserted them, their mournful moans following us in the breeze all the way to Heathey Lane and Jack’s Mere. 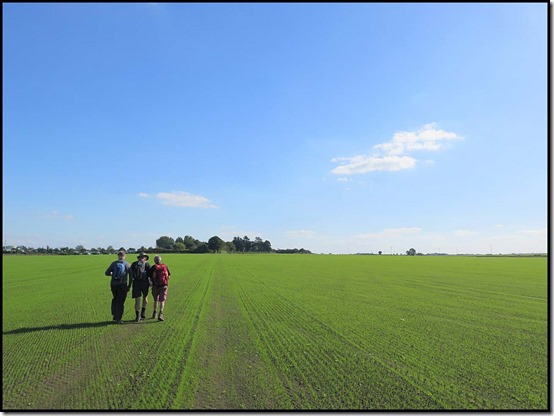 We made our way along the footpath through Hooton’s Farm, at one point having to hack our way through a forest of nettles. It may have been easier to ignore the path and walk through the field to the south.

Scarisbrick has a pretty lodge and a long driveway that leads to a school. The high proportion of personally registered cars indicated a certain exclusivity. A gent in a Jaguar paused to satisfy himself that we didn’t present a threat. (It took him some time.)

We enjoyed lunch in the sunshine on a grassy bank by the Private entrance. Bernard enjoyed his sandwich, the rest of us feasted on cake, and John pondered a phallic object that his wife had wrapped in tissue and placed in his lunch box. 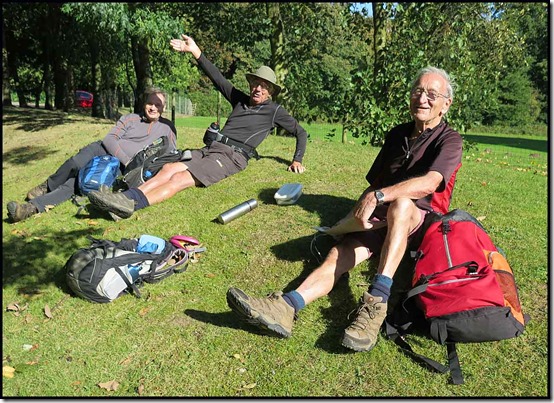 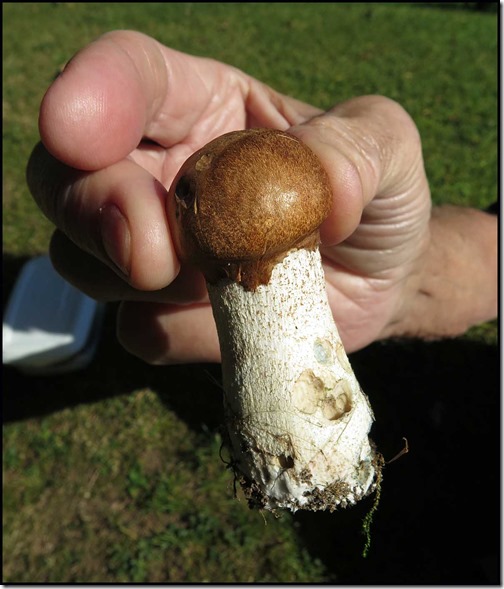 We negotiated the roads passing alongside the school without incident, before heading along Dam Lane and Merscar Lane. Tractor Number 5 – an early Massey Ferguson driverless prototype - weaved past us, heading crazily in the direction of Slattocks. 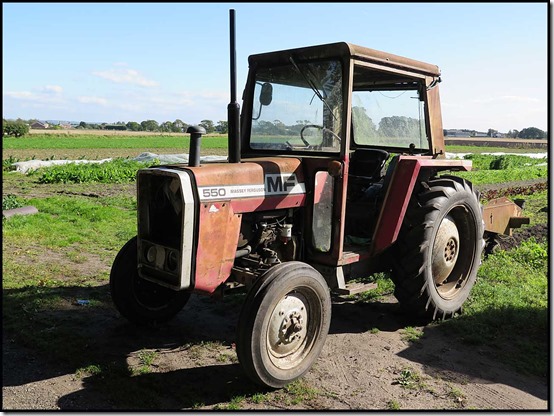 Eventually we reached the scenic delights of the Leeds & Liverpool Canal for the last stretch to Burscough Bridge. 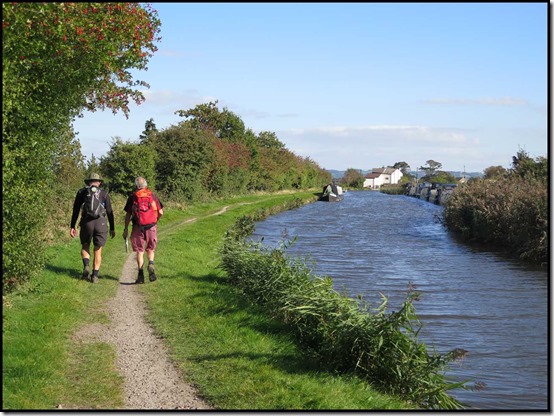 It's a lovely stretch of towpath. Winter Hill came into view in the distance, as did one of its nearby residents, or so we thought…

“Hello Norman, what are you doing in that dinghy?”

“I’m not Norman”, protested this man, “I’m his twin brother, just checking the seaworthiness of my houseboat!” 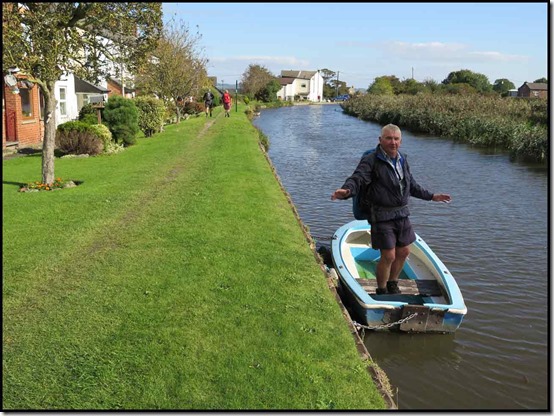 We left Norman blushily renovating his houseboat, which looked a bit basic to us (the only tool he had was a baler), and left the canal at bridge 32A.

The Hop Vine proved to be very friendly and a great place to finish this five hour jaunt before catching our train back to Westhoughton. That wasn’t so simple as there was some confusion regarding the timetable – we caught a train at around 3.30, a good 15 minutes later than expected, much to Bernard’s consternation. 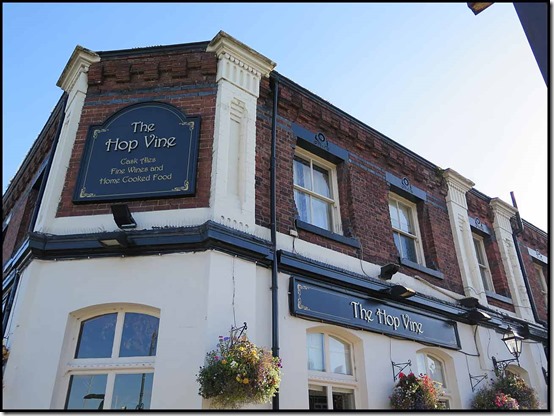 Stage 1 of the ‘36 Degrees’ walk had proved to be about 19 km, with around 100 metres ascent, and it took us less than 5 hours including several breaks (walking time was 3.50). We now have a selection of .gpx files. There’s an additional twenty minute walk to the start from Ainsdale Station, of course.

Here’s the route – click on the image for a slightly larger one.

There’s an album with 39 pictures here. Try clicking on the first image and seeing what happens. I’d like you to be able to view a full screen slideshow with captions, but the current Google software doesn’t seem to be amenable to this.

Nice day out Martin. Some fine machinery on that trip and i'm sure you don't want me to name them all, they are easy ones. MF never did the auto pilot on the 550 btw.

ps. Clicking on "Here" for the slideshow just brings up an error message.

Thanks Alan
I've tried to upload the album again. It worked for me before, and does again this time, but in a different format although I uploaded it in the same way.
I wonder if it now works for other readers?
M