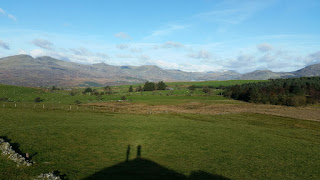 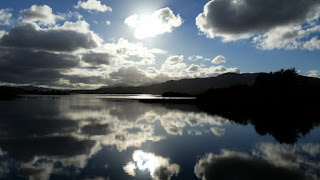 Sunday
(Non) Storm Angus didn't arrive. We have enjoyed a sunny but cool day.
William Rufus's motte, built in the eleventh century at Tomen-y-Mur, may have become the site of a castle but for the intervention of Gruffydd ap Cynan, the ruling prince of Gwynedd, who in driving William back to Chester secured two centuries of independence for Wales. Sue and I are shadowed on the top of the motte as we look towards Snowdon in the top picture.
A thousand years earlier the Romans had easily over-run north Wales. The fort established here on a four-acre site following Agricola's conquest around 78AD, formed the southern corner of a network encompassing Snowdonia. The fort may have been used as a training base for the entire region.
After exploring the fort, Sue and I enjoyed an 8 km circuit, nearly reaching the site of some Roman Camps to the east. A local farmer was unsuccesful in his attempts to drive us back to Chester. (We befriended him - it was a struggle but he eventually managed a smile.) Julia was more modest in her aspirations.
Lunch was taken by the Roman amphitheatre at Tomen-y-Mur, then we drove down to Llyn Trawsfynydd for a short stroll near the nuclear power station that is being slowly decommissioned. The cloud reflections in the lake were spellbinding.
After that the supermarket called, and tea with our landlord at South Snowdon Wharf, before a jaunt around Llyn Bach for Sue and me before the curtains were drawn on an unexpectedly lovely day.
The storm arrives tomorrow?
Posted by Phreerunner at 17:12