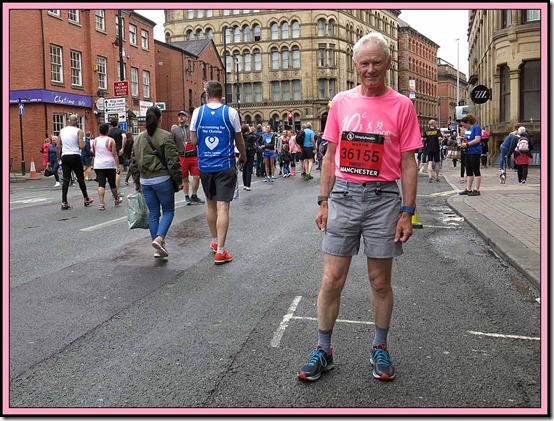 I ran in this event, over the 10 km distance, once before the days of this blog, and in 2013, when it didn’t clash with the TGO Challenge. This year it didn’t clash, and the organisers introduced a Half Marathon event. It seemed a good opportunity to try to raise some more much needed funds for the Levana School Partnership, so I entered the longer event, albeit in the knowledge that I would be hampered by tired legs from the TGO Challenge.

Yesterday’s events were somewhat overshadowed by last week’s terrorism in Manchester. A minute’s silence was held before each event and the mood was a little sombre. Just being there was all that was important to many people.

Here’s what the start looked like last year. This year will have produced a very similar image. 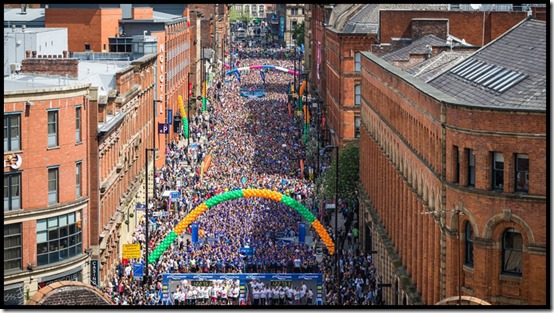 Sue and I caught the tram into town and she relieved me of any warm clothing before taking the picture at the top of this entry. Then she headed off to the Etihad Stadium whilst I waited in an area marked for people who expected a time of around two hours, although my target was 2.10.
With about 2000 runners ahead of me, once the hooter had sounded it took two or three minutes to reach the start line, then it was fairly easy to run at your own pace in the near perfect conditions until the Mancunian Way was reached. Unfortunately all the runners were contained in just half of the dual carriageway, and then in just half of that, to leave space for runners coming the other way.
Sue took this picture of the leaders at the Etihad Stadium. The chap on the right came home first in 1 hour 12 minutes. I met them coming the other way a few minutes later. 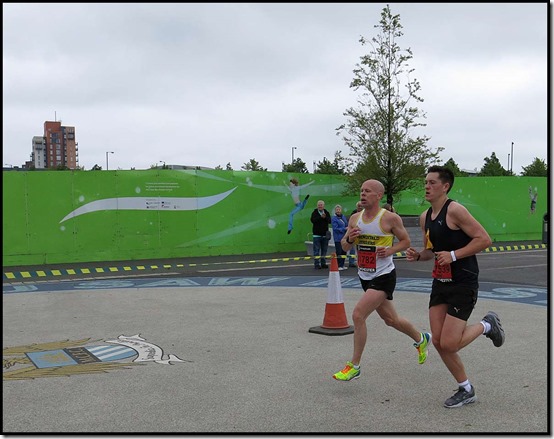 There’s a narrow bridge at the Etihad that proved to be something of a bottleneck. Sue wasn’t able to spot me but this picture shows how busy it was. 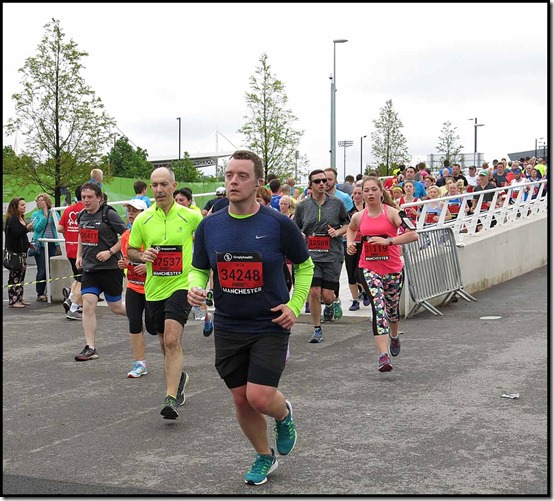 The slow start did me no harm, and I was able to speed up a bit after getting back over the bridge (9 km).

It was good to receive support from parkrunners Andy and Kate at Old Trafford (16 km), by which time the running was becoming much harder.

It’s uphill to the finish, even if it doesn’t look like it. After having overtaken many people during the second half of the race, in the last few metres a whole crowd of folk went sprinting past when I could only just maintain my own modest pace…

All those pictured below went past me and I was only a few metres from the tape. 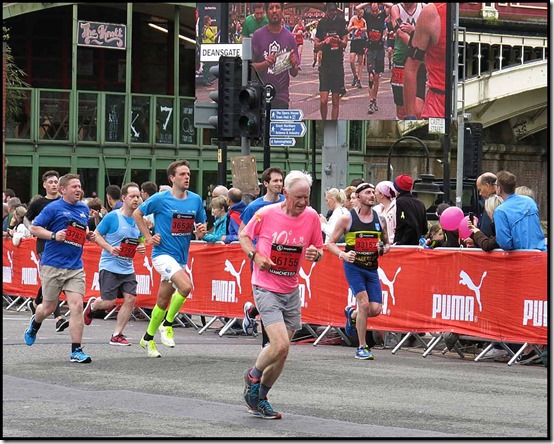 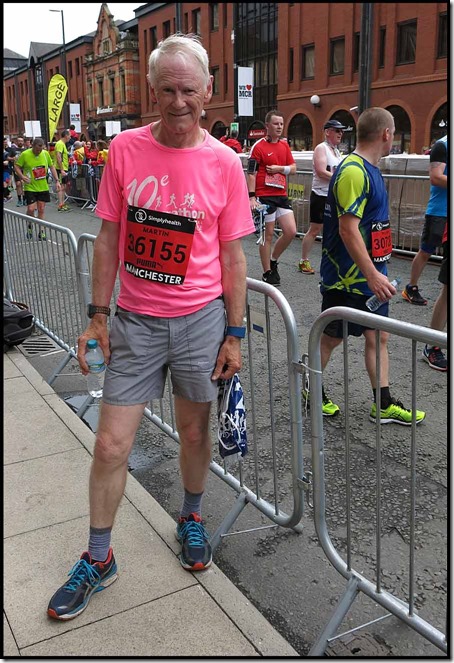 Sue appeared to meet me, as did a most appreciative trustee of the charity.
Here’s the route – click on the image for a slightly larger one.

So it was a successful outing, and I’m very pleased with the fund raising aspect. After recently donating in relation to my Toulouse Marathon effort, far more people than expected have put their hands in their pockets again. It really is much appreciated.

I’ve noticed a couple of friends were taking part in the day’s events.

Well done Martin on three counts: your own time, supporting Manchester, and your own charity.

Thanks Alan, thanks Conrad. All much appreciated.