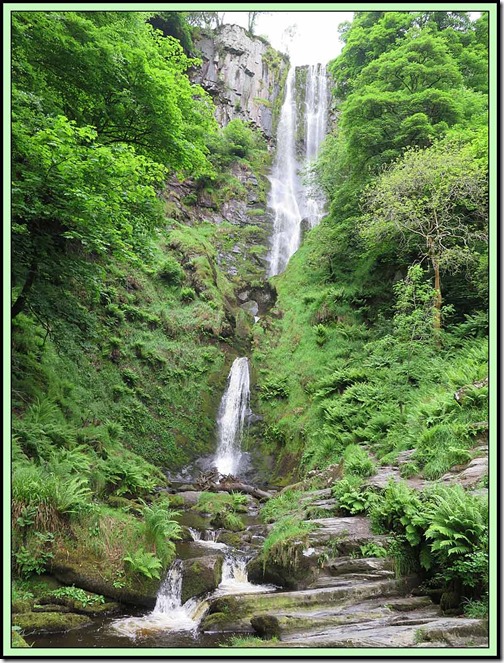 Cary’s text message on Wednesday: ‘…are you interested in joining me?’ he was going to the Berwyns to recce a Sunday walk for SWOG members.

‘Yes’, I was up for that, especially as he planned to walk from the opposite side of the range of hills to the approach I made on 16 August last year. My report on that excellent outing is here.

It took an extra half hour (2 hours from Timperley) to get round to Tan-y-pistyll and the impressive road head waterfall.

There’s a small lay-by in which to park. A chap was setting up a chocolate shop there, so it must get busy. The only alternative is to pay £4 to park at the waterfall, where there’s also a café, B&B and campsite. 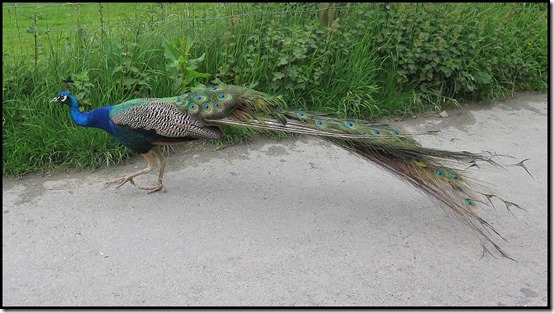 Compared with the Llandrillo start, this one is brutal, with a steep ascent to the top of the waterfall being rewarded with a fine view down the valley. 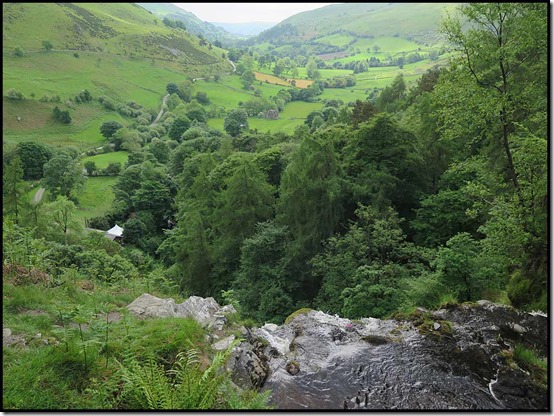 What with Cary’s tired legs from climbing Scottish mountains and my tired legs from lugging 15 kilos of luggage across Scotland for two weeks, we took a while over the first, steep, three kilometres. Then the ground levelled a little, so apart from having to make our way around numerous marshy hollows we found the next kilometre of ascent up to Moel-Sych a little easier, especially given the orchestra of skylarks. 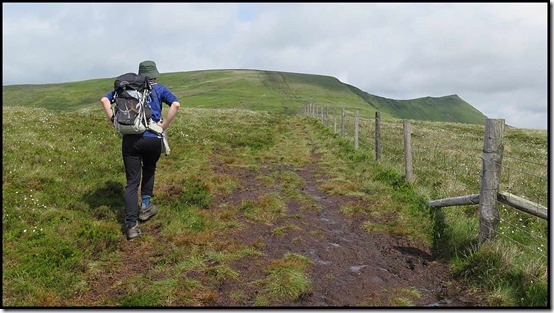 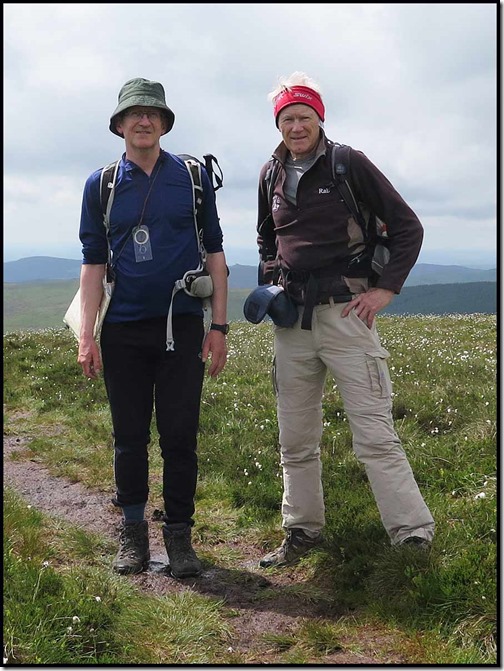 A chap from the Midlands joined us for a while, before we romped off to the main summit of Cadair Berwyn, the highest point of the walk. Here’s Cary on the ridge. 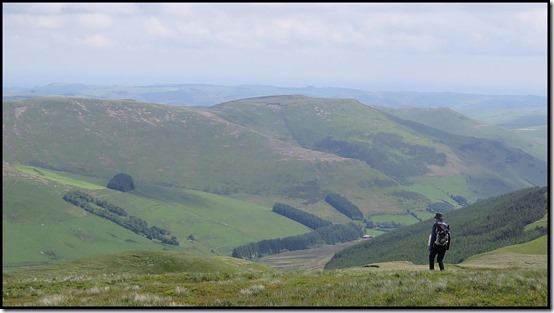 From Moel-Sych there’s a good view down to a lake, Llyn Lluncaws. 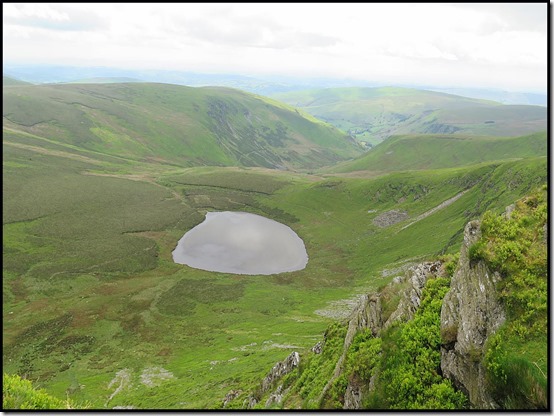 Cary led the way to the high point of Cadair Berwyn (830 metres). 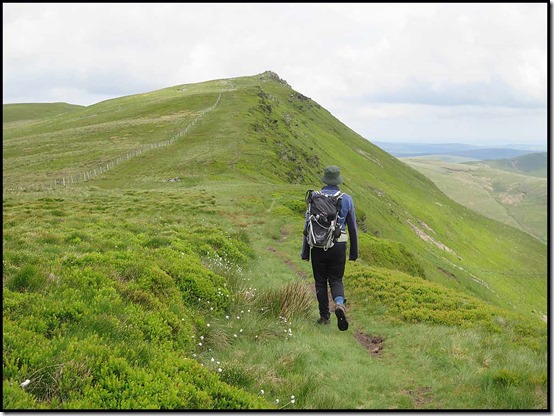 Beyond the high point is a fine shelter, and nearby at the North Top, a trig point at which Cary and I are pictured (via some passing strangers and a camera swap). It was a lovely day with a refreshing breeze high up. 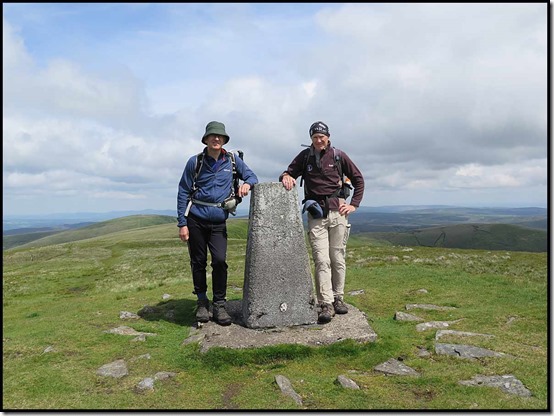 From here we continued over Craig Berwyn and down to a minor col that houses a path from Llandrillo, before ascending to the summit of Cadair Bronwen – a dogleg extension for us today.

Eight people and a couple of dogs mingled briefly on the summit. Cary and I enjoyed some lunch and then set off back down a boardwalk through bog and cotton grass. This took us back to a contouring path towards our next objective, Tomle. 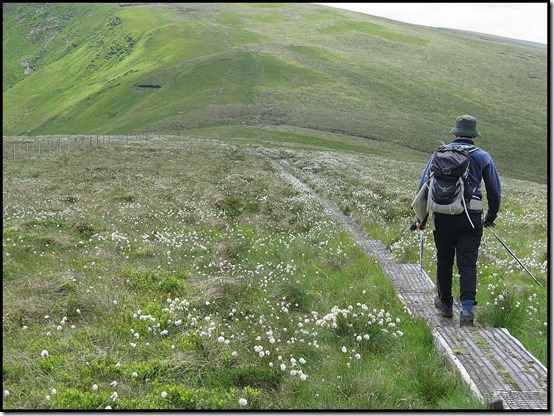 Here we are (below) looking back to the main ridge from the path to Tomle just beyond the end of the contouring path. From this point on we saw no other walkers. Everyone else must have returned by a shorter route. I hope they didn’t try to pass through any of the forests, which looked like deep green plush carpet mats thrown over threadbare matting. 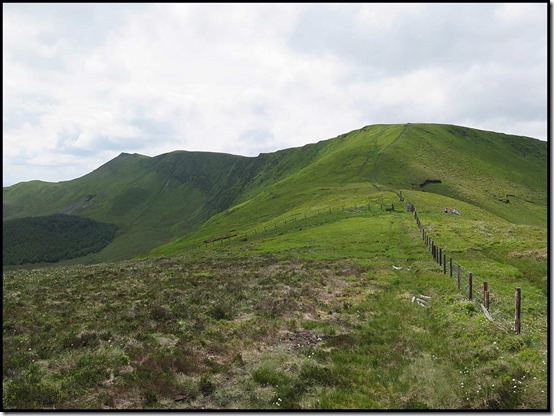 We plodded gently on, trying to avoid the boggy bits, passing over Foel Wen and Foel Wen’s South Top, before descending beside Mynydd Tarw (pictured below), where Cary and I somehow misplaced each other for a while, before descending with Cary whingeing about his sore knees. It was t-shirt weather; Cary realised this by the time we got to a farm at Waen, where we lazed for a while on a nice flat rock. Here’s the view. 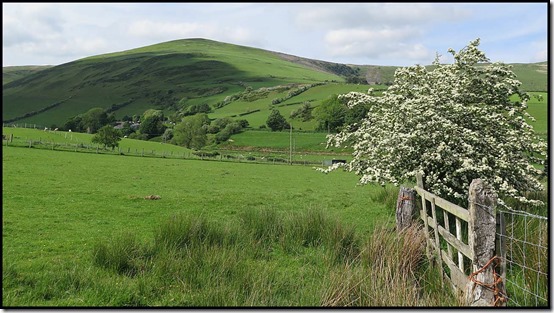 A steep ascent brought us onto a good track for a while, but beyond Rhyd-y-gau a jumble of tussocks on a blanket of bog led to the corner of a felled area of forest and a vague path beside then through the forest to another track. The going was hard at times, but the views were wonderful, with almost every shade of green being represented. Bluebells, buttercups and plantains struggled to breathe in the deep grass that will presumably soon be converted to silage. The next picture was chosen with difficulty from a series of similar images. 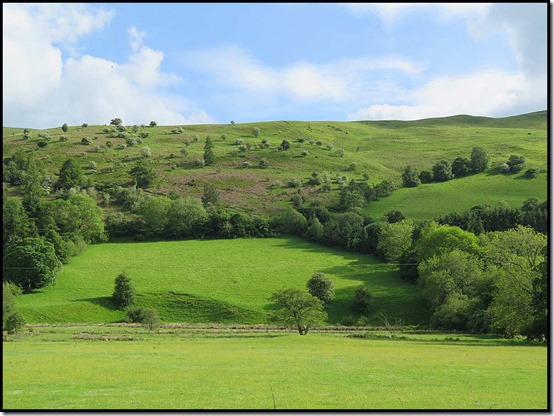 Eventually we reached a good track that led down to the valley road. After a kilometre or so of road walking we turned south along a good path through the remnants of a small quarry to reach Tan-y-pistyll. On the way we encountered a young farmer who was trying to train a young sheepdog, Sam. It was early days, and Sam’s intelligence seemed limited, unlike the farmer’s. ‘You need an incredible amount of patience’ he confessed, before we embarked on a mutual session of consolement regarding the expected disastrous consequences of ‘Brexit’.

Through the late afternoon haze, you can see in the picture below our ascent route, and a curious rock formation in the middle of the campsite. The waterfall is hidden in the trees. This is a lovely path, and a highly recommended alternative to the tempting (for tired legs) attraction of the quiet road walk back to the car park. 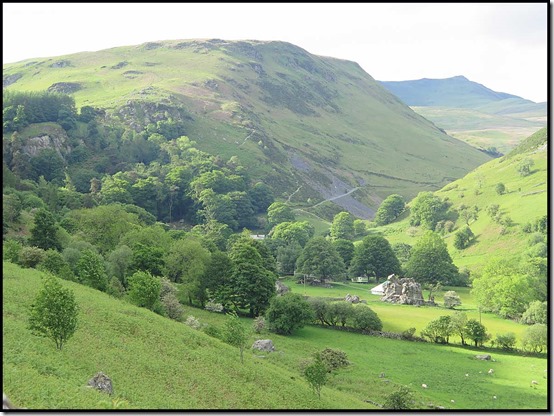 This way you get a splendid view of the massive waterfall. It must be really impressive when in spate. 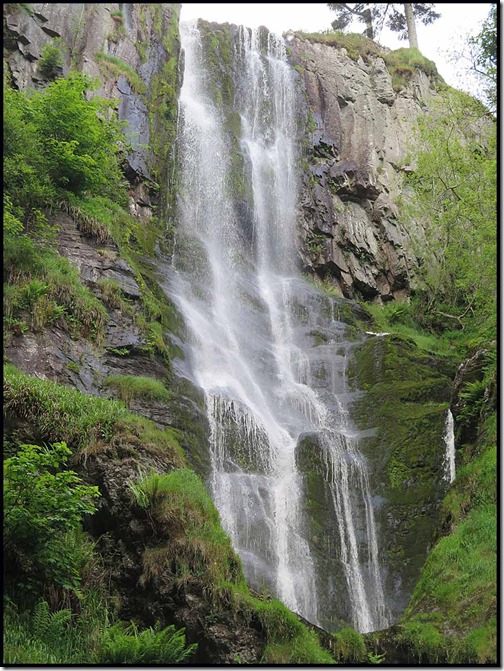 It was nearly 6.30 by the time we reached the car, so a halt for sustenance at this hostelry on the way to Oswestry was considered compulsory. 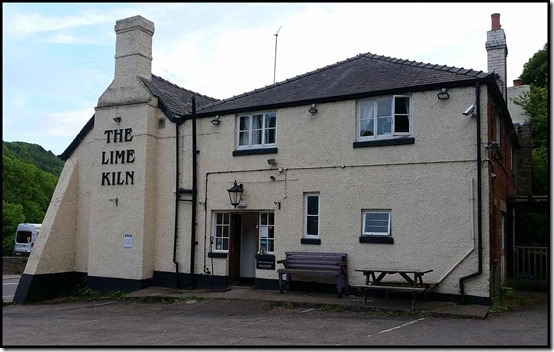 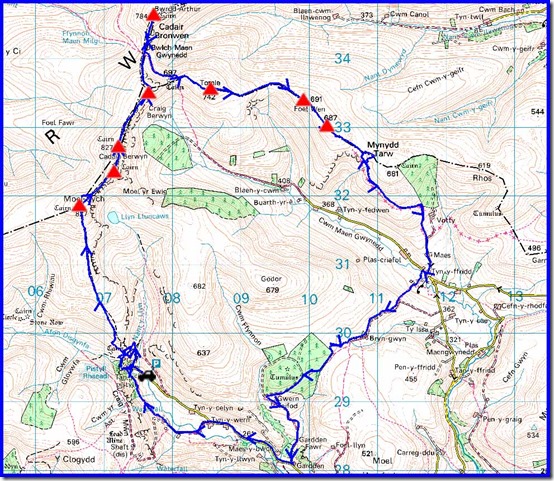 That concludes a very successful ‘recce’, but as the SWOG walk won’t start until after 11 am, and may be further delayed by a local road closure, I don’t think Cary will risk leading them to a 7 pm finish, or he might have a rebellion on his hands.

Back to the drawing board?

A grand day out Grommit, despite my sore knees (did I mention them by any chance?)