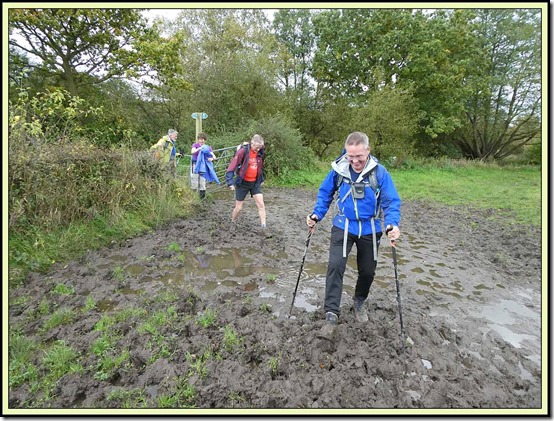 Today’s victims were JJ, Graham B, and Sue and John B who had returned for another outing after enjoying the last one from Irlam. We started from the small car park at Lindow Common (SJ 833 814) and took a country line past Morley Green towards Oak Farm. Some dampish conditions were encountered. Sue’s olfactory sensors correctly informed her that this was not exactly ‘mud’. Ankle deep in slurry, John B was heard to mutter “the wife’ll kill me!”.

Once past the above obstacle I managed to take the next photo before JJ snatched it for his next ‘road kill pie’. 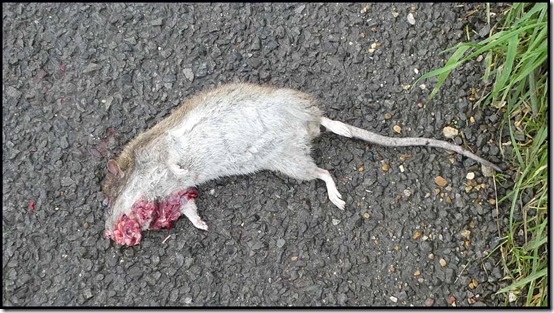 We came upon this useful sign directing us along the Bollin Valley Way footpath. 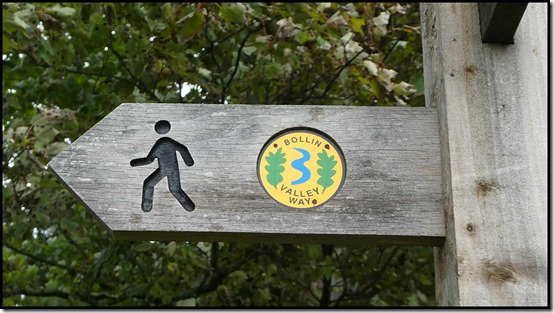 We marched off, in accordance with the sign, along Dooley’s Lane, which becomes a narrow track, to the right of JJ and Graham in the following picture. An irate couple harangued us, demanding that we walk on the ‘footpath’, rather than the track, which they claimed was their garden. JJ had encountered them before. An unpleasant pair who spend their days shouting at walkers who deign to use the (public?) track that leads to Shadygrove Cottage. We obliged by not walking on ‘their’ track, though I suspect we had every right to walk along it, and we will next time. 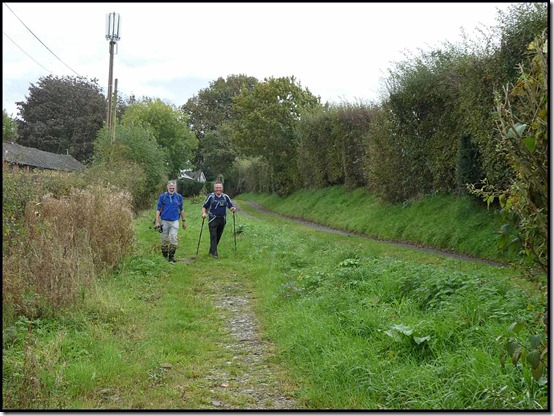 The field paths led inexorably to the magnificent tunnel that guides the River Bollin under Manchester Airport’s second runway. A self-timed photo was attempted, but the lighting unfortunately left us as a silhouette. We forgot to take another picture, so this adjusted version is the best I can manage of today’s motley crew. 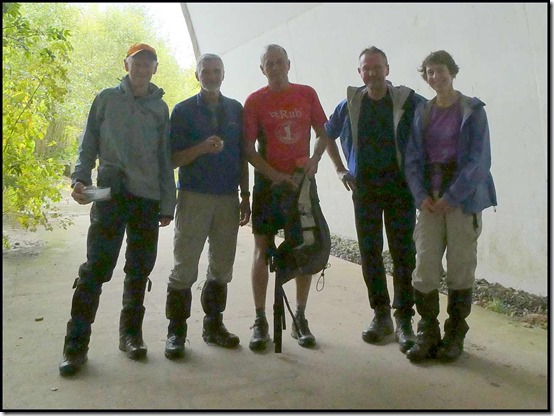 It was drizzling outside so we enjoyed a cake break admiring stalactites in the shelter of the tunnel. 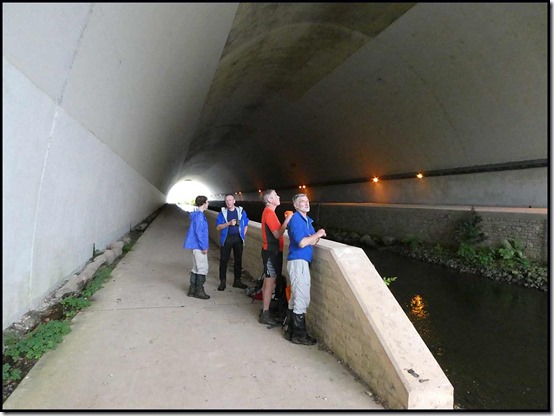 We then headed across Altrincham Road and into Styal Woods. Prior to Hurricane Ophelia this Giant Redwood tree stood 300 metres high, towering over the woods. Despite its 50 foot girth, it may not have survived the storm, so this photo may be a collector’s item. (Offers on a postcard, please.) 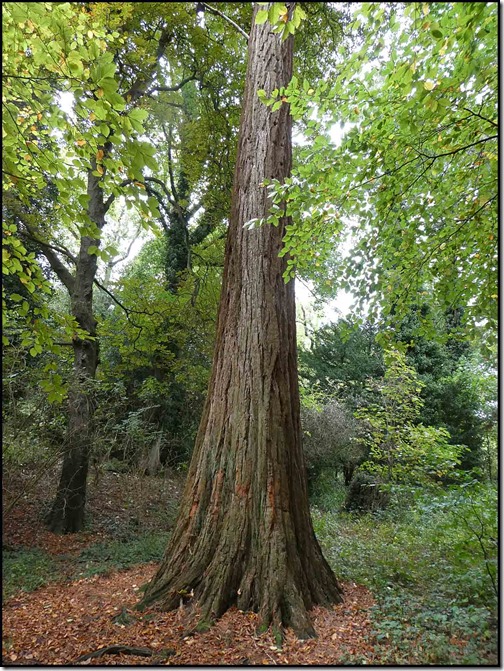 After a while, steps led down to Giant’s Castle Bridge (perhaps named after the giant tree above??!) 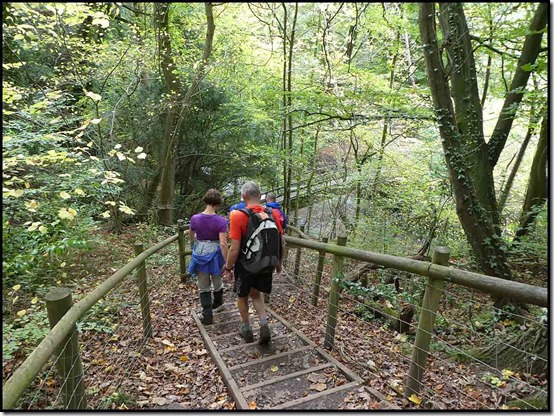 The River Bollin meanders quietly over a weir just here. This view from the bridge before the hurricane may now have completely changed… 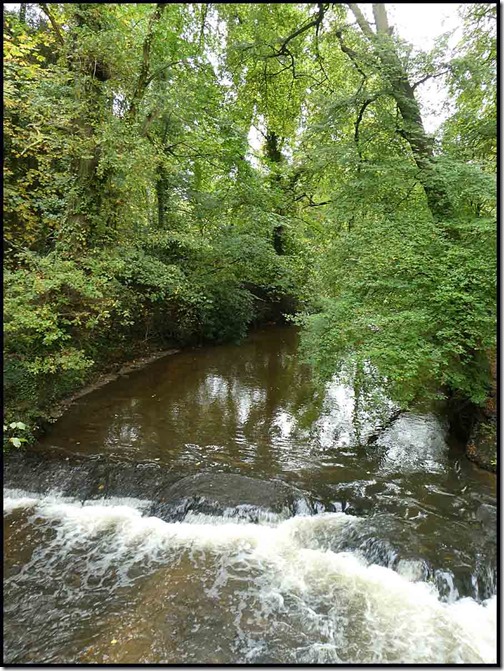 Soon, Sue snatched the camera and ran ahead to take the following two photos before JJ could bag the subject matter for his pie. 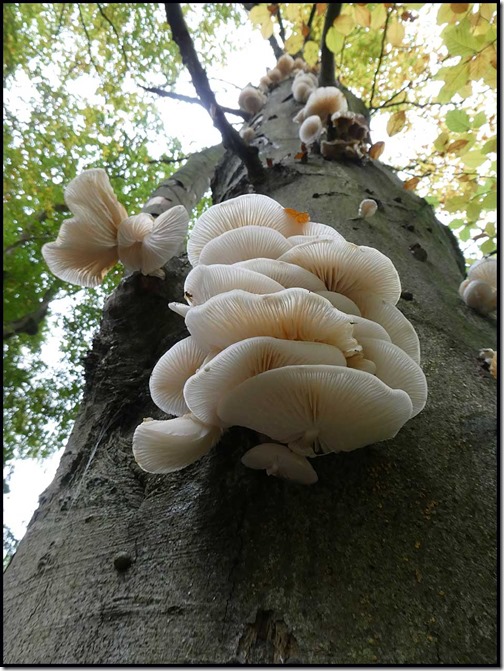 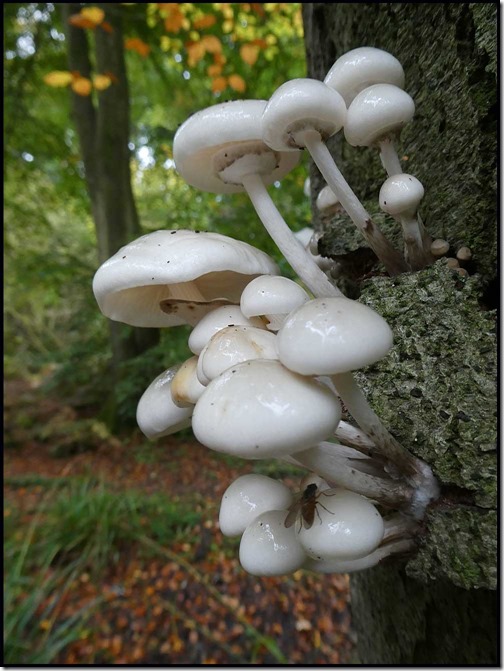 “Hang on JJ, you missed these beauties". 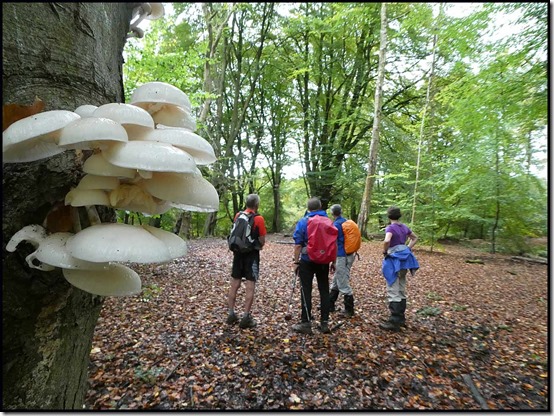 Sadly there has been an outbreak of an infectious plant disease, Phytophthora ramorum, in the woods, leading to the need to fell all the larch trees rather than leave them to the mercies of Phytophthora and Ophelia. The area of devastation, not fully reflected in the picture below, will be allowed to regenerate naturally. Expect willowherbs to dominate the scene for a while. 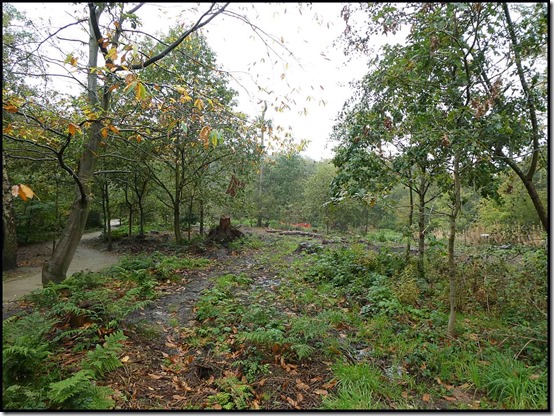 The gardens at Quarry Bank Mill were closed, so we took the high path to join the entrance drive near the new entrance building that wasn’t there last time we visited in March.

A quick coffee all round in the café at the mill provided a short break before the walk beside the Bollin to Twinnies Bridge, then up the hill to the car park at Lindow Common.

An enjoyable and very jolly outing despite a bit of drizzle and slurry – here’s the route – 10.8 km, 120 metres ascent, taking 3 hours including breaks. 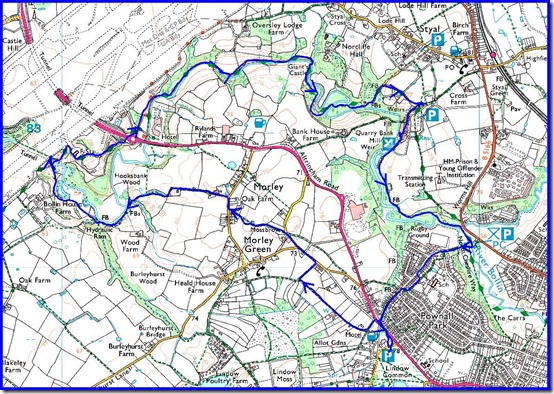 'Drizzle and slurry'?
You're too polite!
Twas a nice little jaunt - thanks for inviting me along. Oh, and I decided against the Rat-au-Van.

You're kidding JJ! Have you turned veggie? Anyway, I'm sure you enjoyed the champignon soup....

I tried to "enhance" your silhouette photo but to no worthwhile result. Too far gone!

I'd already enhanced it Conrad...