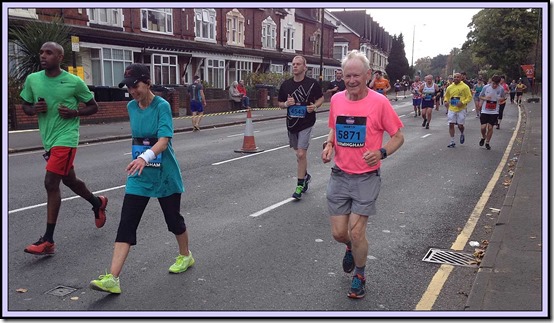 After completing the Toulouse Marathon last October, I thought it might be a good challenge to try one of these events every year. I was a bit nervous about going to Toulouse again as I doubted it could match up to last year’s experience, so I chose Birmingham’s first event of this nature in recent years.

Getting there was a bit easier than getting to Toulouse, as Sue’s parents live in Birmingham and it was an easy 30 minute drive to the Alexander Stadium for the start.

I’d tried to get vaguely fit for this by running for 4 km every now and then (about 16 times) whilst on our recent trip to Canada, plus three parkruns, on the last of which one of my hamstrings ‘pulled’. That was nearly a month ago and I hadn’t been able to run properly since then.

I decided to take part anyway, and to walk round the course if necessary. So I took up a place at the very back of the 5200 strong field of runners. Half of them had set off at 8.30 in the ‘red’ wave of faster runners. I waited behind the ‘longer than 6 hours 30 minutes’ flag for the 9.30 start. Everyone was very jolly and relaxed; there were no nervous ‘elite’ runners here.

The official start is out of sight to the right in these pictures. We watched about half the field start, then there was a three minute gap before the next ‘surge’, and those of us at the back eventually got started around 9.45. 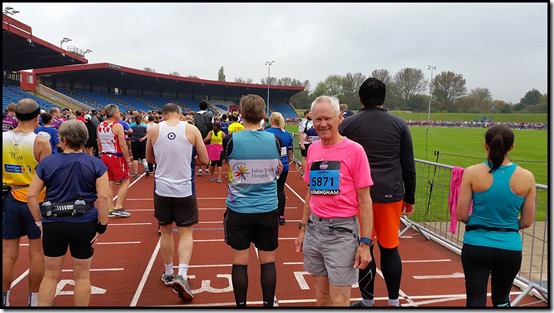 I’d been chatting to an interesting chap, Taiwo Opesan, a 48 year old of Nigerian heritage who lives in Hale and coaches amateur footballers. We stayed together for the first hour, until I had to stop to slacken a shoe lace. That’s not happened to me before, and I had to stop later to slacken the other one. Apart from that my feet were fine despite being in trainers that are past their sell by date, and so long as I shuffled as opposed to striding out, my hamstring wasn’t too painful, though I did get some soreness behind the knees that took a few days to subside.

I caught up with Taiwo again, but even though my own pace slowed, he fell behind, finishing in 5.41. The support around the course was excellent, with lots of water and jelly babies being handed out. Sadly the only person with bananas was Sue, whose banana handout sped me towards the finish.

There was lots of chatting, with an assortment of folk. I find it takes my mind off the continuous effort of running if I can chat to somebody on such an occasion. The running is so slow that getting out of breath isn’t a problem, it’s the legs that are suffering…

Anyway, despite not being able to match my Toulouse timings I only gradually slowed, and like many of those around me (“we can slow down now, we’ll meet our target”) I managed to finish in under five hours quite easily, if totally unexpectedly.

Sue and I adjourned for essential rehydration fluid after I’d finished. We could look down on the course, which finishes with a rather cruel hill, so there was no last minute sprint this time. 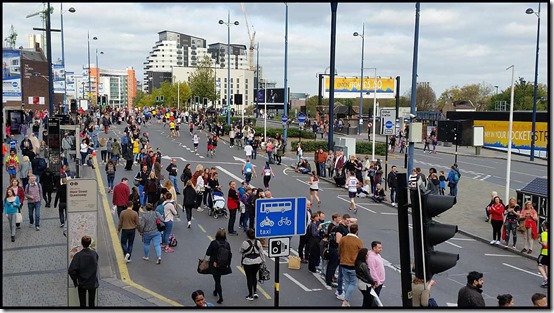 Café Rouge is really a restaurant, but they seemed quite happy to serve only fluids. 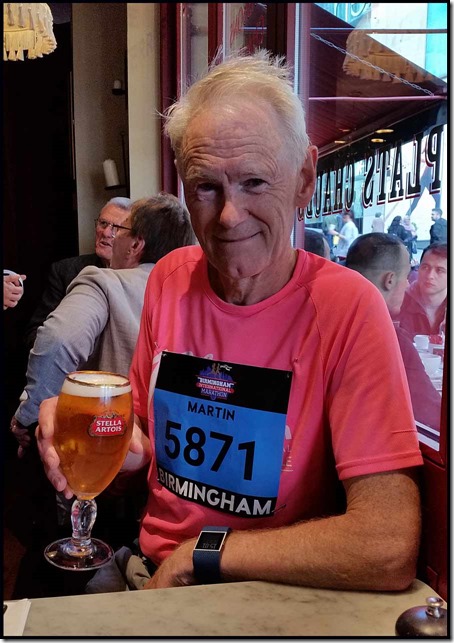 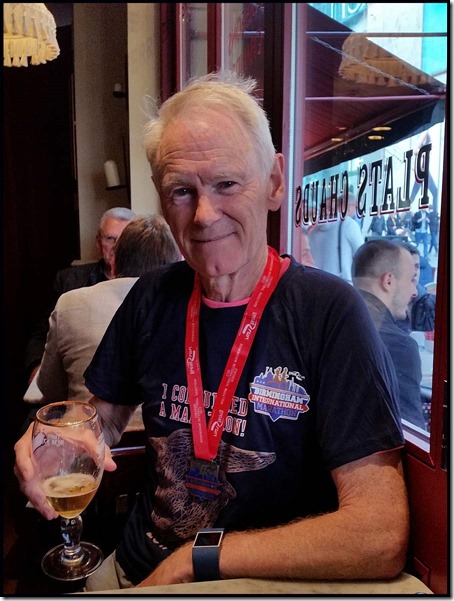 Here are a couple of screen dumps from the results website. 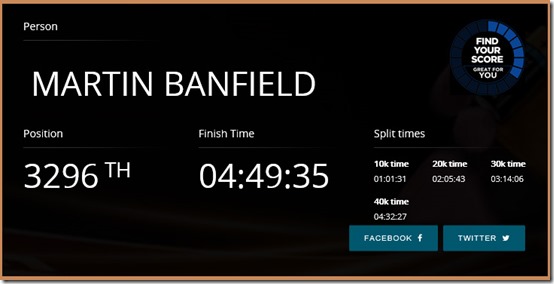 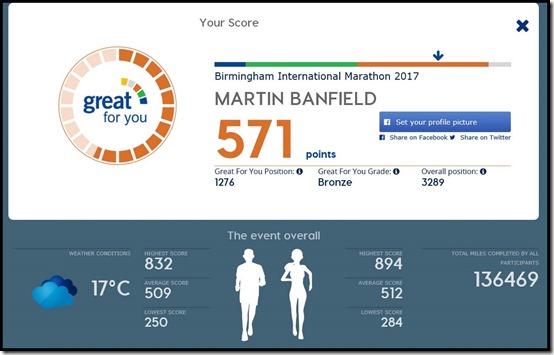 There were just over 5200 participants, of whom about 44 were aged over 65. One of the other people in my age group was a TGO Challenger, Stan Appleton, who took just 4 hours 18 minutes. My time, 17 minutes slower than my time in Toulouse, placed me 16th out of 31 men in my age group, in which there were also six women, all a bit slower.

Great news though – my sub 5 hour time makes me eligible to enter the 2019 London Marathon on a ‘good for age’ basis, so I won’t need to try to enter via the dreaded ballot. That’s some way off though; anything can happen before then. Meanwhile, here are (mainly for my own benefit) some more stats. 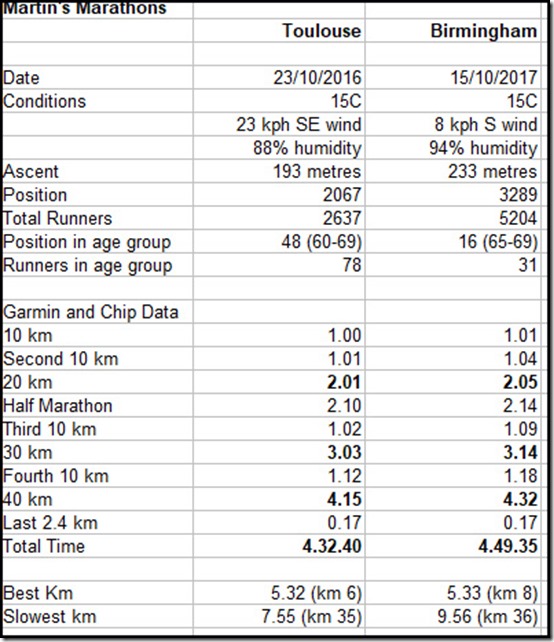 Thanks JJ
We are jogging slowly around Sale Water Park parkrun tomorrow if you fancy a blow.

Well done Martin. I was concerned that you were running in trainers "past their sell by date." For heaven's sake look after the knees, get some good cushiony Sorbothane insoles and give everything the best chance possible, especially running on Tarmac.

Your concern is appreciated... My trainers feel very comfy, Conrad (except when laced too tightly) and I have Salford insoles that seem to provide good arch support. But the shoes have done over 600 miles, which I'm told sends them beyond their 'sell-by' date regarding cushioning. I wasn't going to wear new shoes for such a long outing though, and my knees didn't suffer apart from a bit of muscular strain at the back, as my 'shuffling' action involves very little impact. In the latter stages I was only shuffling at an average sort of walking pace, as I was really trying hard (with success) to avoid further injury.
(Having said that, I do have a history of knee problems that could return at any time; regular exercise seems to be an antidote!)

So you beat nearly 2000 other runners, most of whom were younger than you and you had a hamstring injury! Not bad for a day's work!

Thanks Alistair, and well done to you for your excellent time in Toulouse. We should start a mutual admiration society. (Actually, I think we have done.)
Starting right at the very back in Birmingham was a master stroke, especially as I found someone interesting to chat to for the first hour. It meant that although I was slowing down all the time I was consistently passing people until near the end, when most people were going at the same pace (although it was a bit disconcerting to be passed by a young girl wearing Ugg boots).