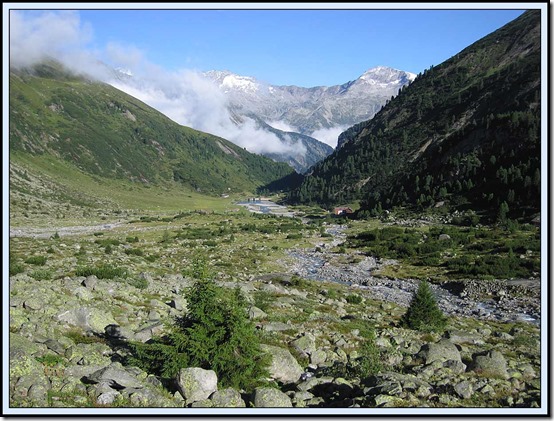 Thankfully there is some blue sky. We breakfast at 7 to avoid the school kids coming at 7.30. Leave at 8am to cross the raging river, then a couple more rivers over small bridges. 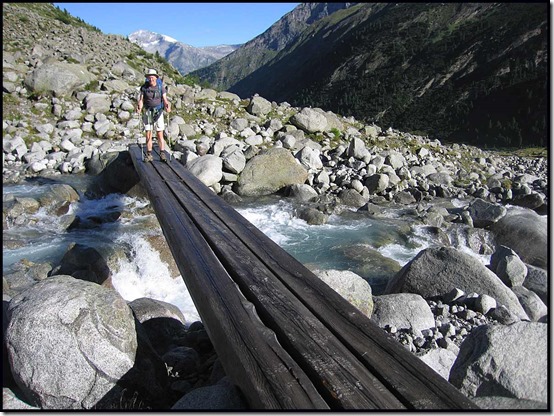 We descend from 2044 metres to 1960 metres with continuing nice views down the valley (top picture). Cloud comes and goes as we climb to the lateral moraine and walk along its narrow crest. As usual, a lovely path, and views all round. We pass the three girls and see others ahead, including Manfred with his distinctive large blue rucksack. We catch him up, and pass, with photos to record the occasion. 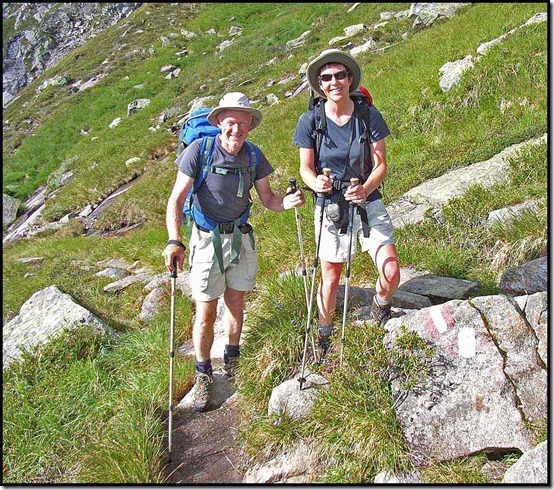 The views from this ascent are stunning - into the valley, and across to several glaciers, as well as back to the Berliner Hütte, which can be seen to the left of Sue’s head in the following picture. 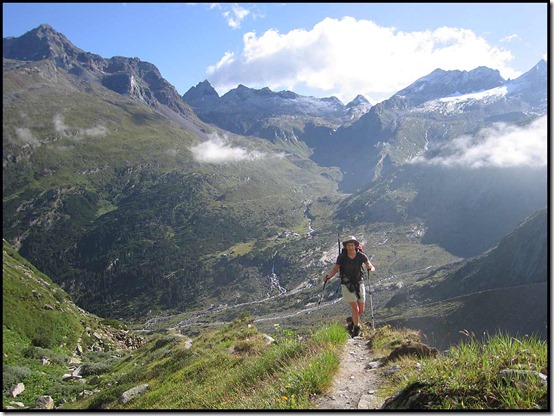 We leave the moraine and cross boulders, with wires being provided for a couple of sections.

Had a break when the gradient slackened, then soon caught up with the couple ahead. This turns out to be Kevin and Alison, from Reading, whose entries we have seen in the hut logs, one day ahead of us. They rested at Berliner, sitting out the bad weather and allowing Alison to recover from a slip that has left her with two black eyes (Ed. That was her story, anyway.)

Nice narrow ridge after this point, with snow either side. The grass was disappearing. A helicopter flew around nearby summits. Many folk were walking in the opposite direction, and as the ground steepened and became protected by wires, it became more difficult to pass. 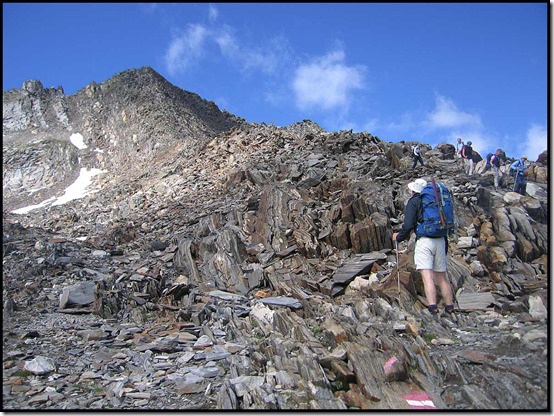 The air was cooler - Martin had his fleece on and mine was donned on the summit, even though it wasn't excessively cool. Patches of hail remained from yesterday. Finally, we shared the summit with two men from Cologne. Views were good, although some cloud remained, obscuring yesterday's col.

The Schonbichler Horn (3134m) is the highest point on the route and has a large summit cross. 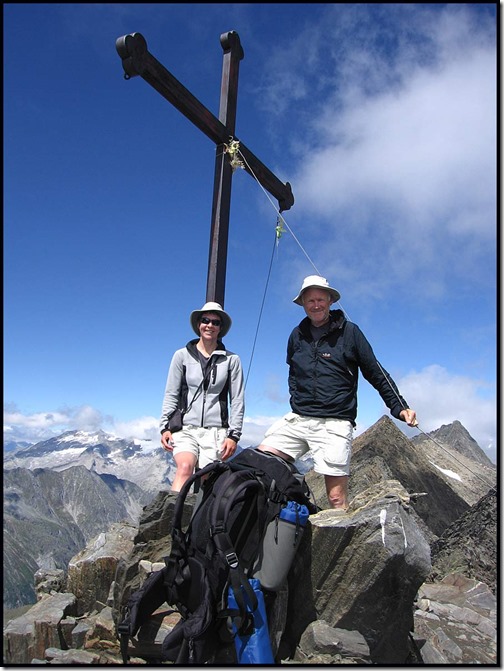 We loitered for half an hour before descending. 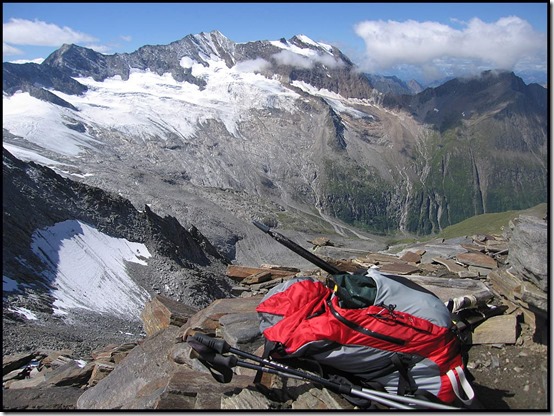 The rocks were wet and still a bit snowy from yesterday, so we took it carefully. Wires assisted the steepest sections, but with cold hands this wasn't easy.

Then, a straightforward walk down the moraine, as it warmed up. Overtook groups doing the summit as a day walk from tonight's hut. Field and spring gentians grew near the hut, and the streams had cascades of yellow flowers. 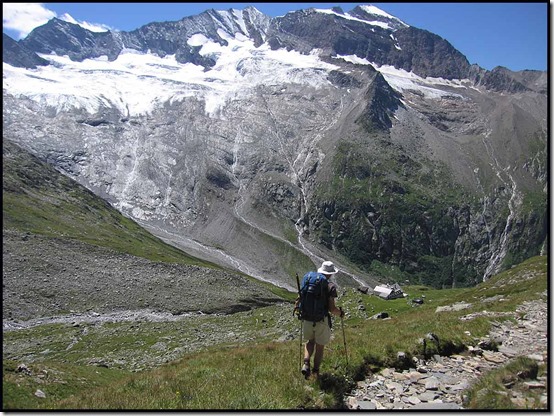 We arrived on the terrace of Furtschaglhaus at 1.30pm, and didn't move for the rest of the day. 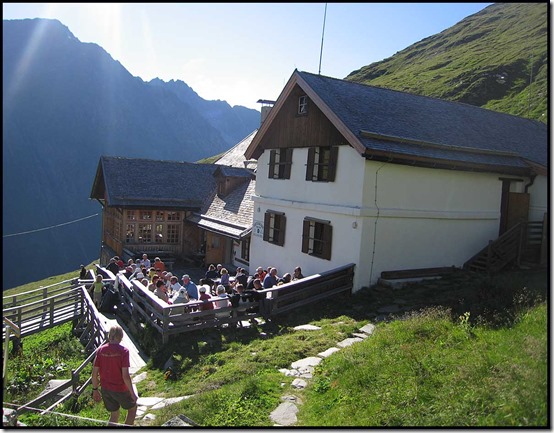 Ate knodelsuppe and shared some apfelstrudel, drank tea, then booked in when the 'Chief' (Barbara) was back. Jumped the queue thanks to Manfred.

Sociable afternoon - chatted with Kevin and Alison, and then with a couple of Dutch lads who are waiting to climb Größer Mossler tomorrow, when the weather should be even better than today. The terrace was sunny, and a good place to relax. (Ed: Over 10 years later, I have a clear memory of an idyllic afternoon, chatting to many different folk as they came and went on this wonderful sunny terrace.) 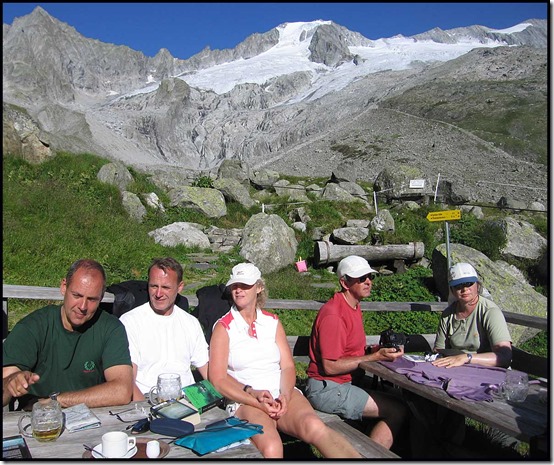 Short conversation with a German database researcher who speaks good English due to 'research' with IBM and Microsoft in the USA each year. His son is reading the latest Harry Potter book, out last Saturday.

At about 6pm we move inside, to a dining room with windows on three sides. Barbara takes dinner orders by table, and the food arrives very efficiently shortly afterwards. We eat Bergsteineressenmenu - soup, salad and pasta, washed down with schnapps, courtesy of Manfred, in celebration of the summit.

Francoise and his brother, the Dutch twins, discover that helmets are required for their proposed ascent - they haven't brought them, so their trip is a bit of a disaster.

'After-sun' is needed for Manfred and the Dutch - it has been powerfully hot today.

Bed before 10pm - but the girl next to Sue in our dorm for 30 seems to think we all should have gone to bed at 9pm when she did! 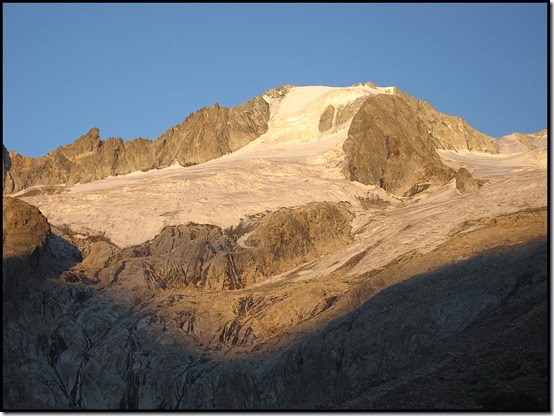 Here’s our approximate route – 8 km with 1200 metres ascent. Note that all the distances in this series of postings are based on my plotting a ‘line’ on the digital Viewranger maps, and the actual distances walked were probably about 20% greater. 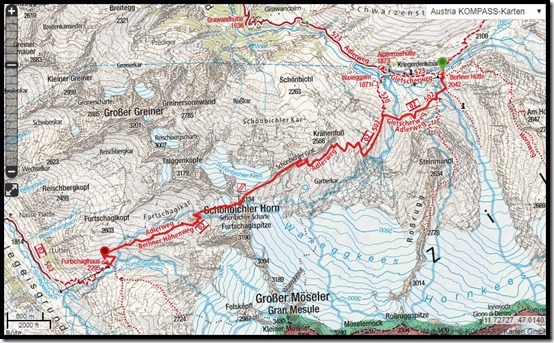 Back to Index
Stage 6