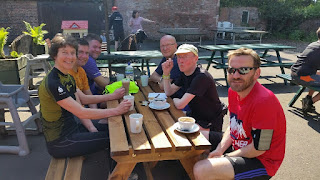 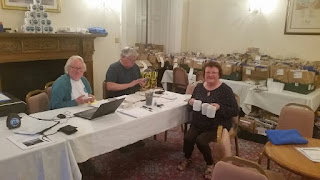 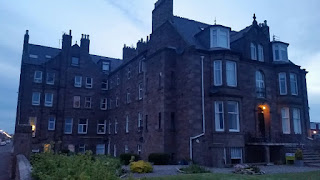 This isn't the usual TGO Challenge report. There are ten of those to choose from to read amongst these pages, plus another in 2007.
This year Sue and I are helping at TGO Challenge Control at the Park Hotel in Montrose. Just for the second week of the event when extra help is needed to cope with the arrival of around 300 people at the signing in point in Montrose.
I travelled up by car today, a week later than originally planned, my day having started with over an hour's worth of root canal treatment. After that I popped down to join the Wythenshawe parkrunners for a coffee. Conditions were perfect for running; there were lots of Personal Best times. I was quite miffed not to have been able to do it.
The six and a half hour drive (330 miles) was punctuated with many stops, but I arrived at 6pm, in plenty of time for the day's 'special' of chicken lasagne, after a quick induction into the system for monitoring participants.
The middle picture showing Pauline with some washing up, and Bernie and Alison with phones in their hands and surrounded by paperwork, just about sums it up.
Sue and I have kindly been lent accommodation a five minute walk from the hotel in the palace shown in the bottom picture.
We are in for a busy week.
Posted by Phreerunner at 22:27