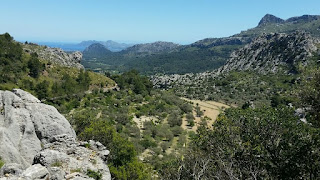 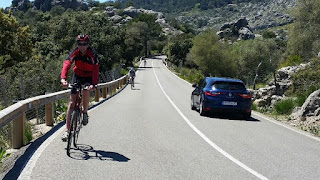 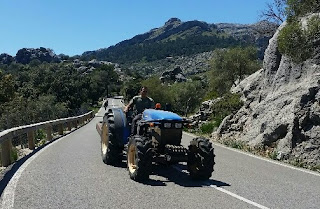 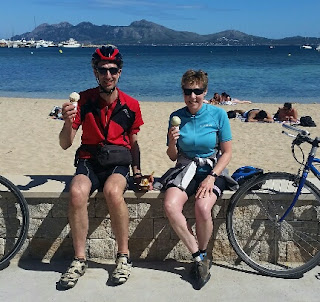 Sue went off to wrestle yet again with the traffic on the Lluc road. This time she had a Big Adventure but managed to reach the 1382 metre summit of Puig Massanella (Cicerone route 27a/27b) and survived with the aid of a Danish man's 1:25000 scale map, our own 1:40000 version having been found wanting.

Robert, Lyn and I set off on our bikes from the apartment and took Lyn's favourite back road, past the church of Sant Miguel, to the outskirts of Campanet. There were lots of cyclists about. There's a café by a right turn, and as we'd done over 20 km I insisted on a coffee break.

We moved on easily to Caimari, where another right turn landed us on the Coll de sa Batalla road, with a climb to over 500 metres. The switchback road is well surfaced and well graded, enabling us to crack the climb without undue exertion in around 45 minutes.

There were what seemed like hundreds of cyclists at the Coll, where somewhat bizarrely there's a petrol station, but plenty of tables free at the Can Gallet restaurant a minute's ride down the hill towards the monastery at Lluc.

Spanish omelettes for Robert and Lyn, and spaghetti carbonara for me. Everyone was very happy.

There were minimal undulations then, before the road swept relentlessly down to Pollença. Hundreds of cyclists were racing down, but I got stuck behind a tractor.

Lots of fine views requiring photo stops that kept letting the tractor get away...

Robert and Lyn eventually caught up with me (but not the tractor) and we sauntered into the centre of Pollença in search of ice creams. The usual stall in the main square was shut, and everyone else we tried had sold out, so we continued along the back lanes to Port de Pollença, where our cravings were satisfied, albeit the flavourings were rather bland.

Sue had returned from her Big Adventure, with more cuts, by the time we pedalled up to the apartment around 4.30. Plenty of time for tea and biscuits before I took my rental bike back to Rent March and we prepared for our one restaurant meal of the trip, at 'Stay'.