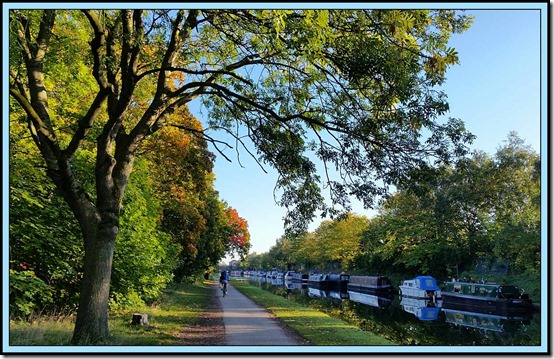 On another lovely sunny morning I set off soon after Sue had pedalled off to work, on an experimental route involving a visit to Bury, then across to the Rochdale Canal in Middleton, and back home along the towpaths.

On the way to Waters Meet my leisurely pace saw whizzing commuters passing in both directions whilst I dodged the overhanging willow trees and admired reflections on the glassy surface in the bright morning light. 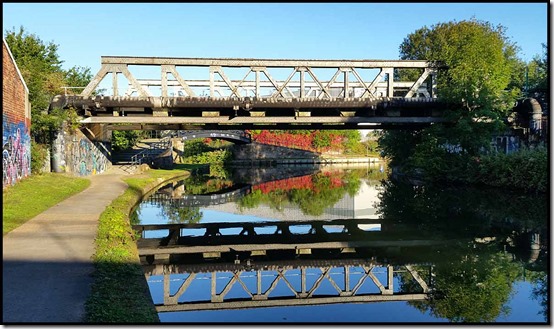 Crossing to the Rochdale link of the Bridgewater Canal (via the distant bridge in the photo above), I passed the jumble of construction work at Pomona Dock where the Trafford Centre Metrolink line is being constructed.

A tram rumbled along towards Pomona station. 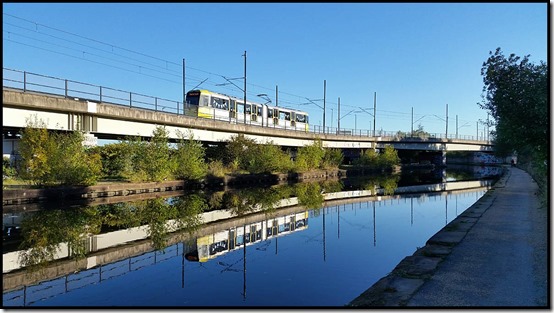 Approaching Castlefield Basin, I located Regent Bridge and National Cycle Trail number 6. I was to follow this trail all the way to Bury, initially beside roads as the route passed the building sites of Salford, seen here on Adelphi Street. 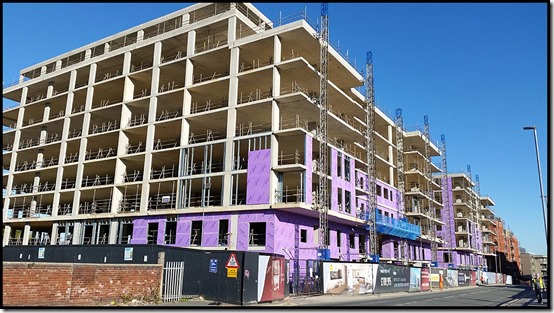 I’ll try a different route next time, taking advantage of some paths by the River Irwell rather than the roads chosen by route 6.

Beyond Agecroft Bridge, constructed in 1892 by Manchester Corporation to carry water pipes from the Lake District, the route entered pleasant woodland and passed through an area of historic industrial archaeology. This totem pole is one of the Irwell Sculpture Trail exhibits. 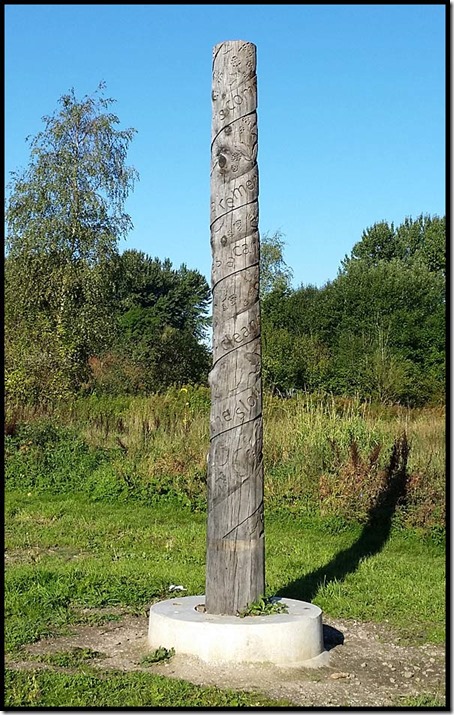 The route is well signposted. There are lots of parks around here. 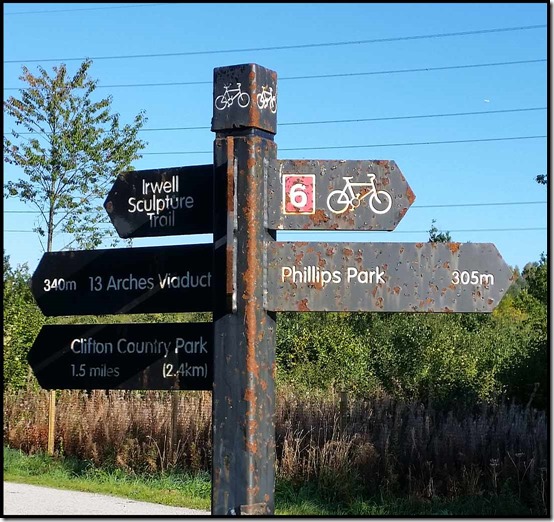 Having said that, it’s unclear as to whether to go under this bridge or go off to the right. Either route leads to the continuation of route 6 on the top of the bridge. 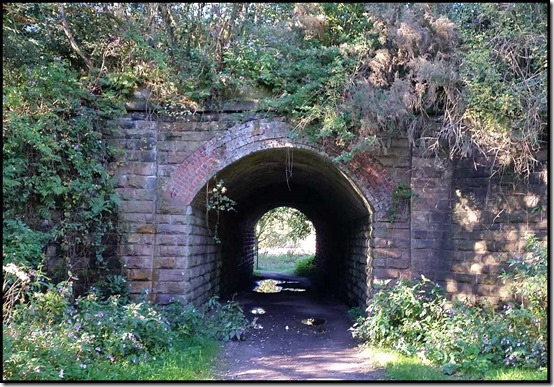 Another sculpture was passed. Some correspondents have been critical of the perceived paucity of sculptures along the Irwell Sculpture Trail. It’s a long trail, and the exhibits comprise industrial artefacts placed at wide intervals. 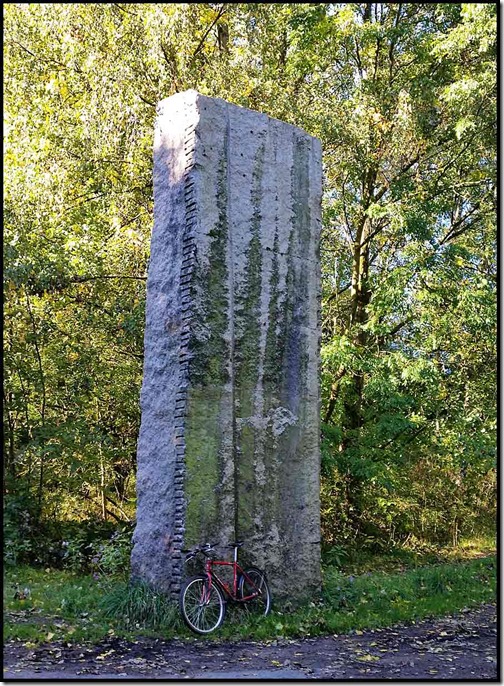 A fairly lengthy section of woodland made for easy, enjoyable riding. I met a policewoman on a horse, but nobody else. 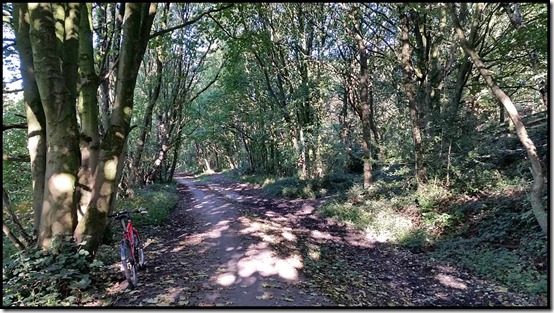 The final section into Bury was beside the Manchester Bolton & Bury Canal, a disused canal built in 1808 to link Bolton and Bury with Manchester. The canal, when fully opened, was 15 miles long and was accessed via a junction with the River Irwell in Salford. 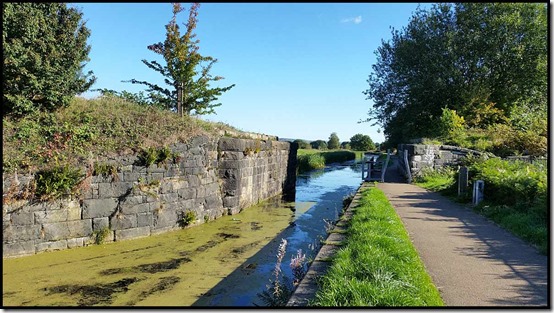 The next picture is of the Rochdale Canal in Middleton. I took no intervening photos as I wrestled my way across the grain of the transport arteries.

After 30km I stopped to take advantage of my flask and banana in a small park by Wellington Road. I then headed along Gigg Lane towards Pilsworth. What looked like a good route beyond Brick House turned out to be a horrible path outside the boundary of a golf course where visitors on cycles were not welcomed.

So my next attempt at this route will take a more northerly direction along tracks and roads that look more favourable.

On this occasion I headed south through Unsworth and across the M66 to another golf course dead end. Later, a good path around the northern perimeter of Heaton Park led to a footbridge over the M60. What appeared to be a white road beyond the little used footbridge turned out to be a farmer’s field.

Retracing again, I made my way successfully through Simister and past The Same Yet pub that I used to visit regularly when living in Blackley, to Middleton and the Rochdale Canal. 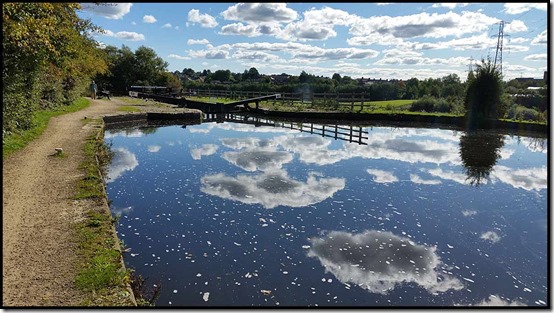 Navigation was no longer a problem. Just stick to the towpath apart from a short section in the gay village in Manchester, where the road next to the canal needs to be taken. There are some sections that go under buildings in the city centre, but the canal goes through pleasant countryside even in places like Chadderton. 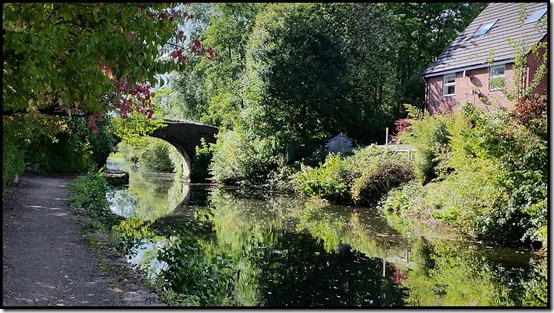 Large flocks of Canada Geese rule the roost in these parts. In the Miles Platting area a short section of canal has been drained. It’s quite a mess. 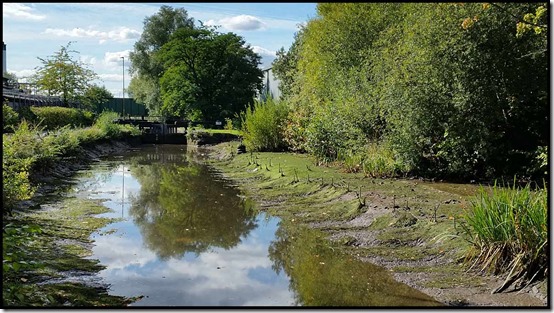 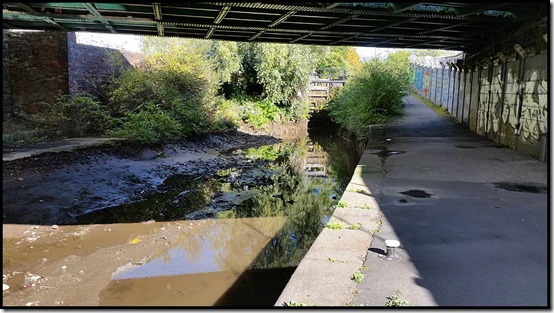 Eventually the Castlefield Basin was reached. Anyone coming this way for the first time could be confused by the canal network here. You come across the Merchants’ Bridge pictured below, then double back to the left of the picture. 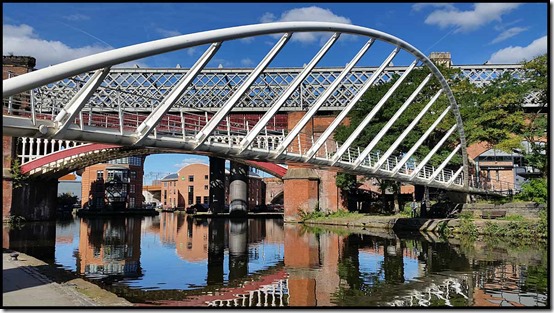 It was still a lovely day and a delight to be outdoors on this gentle ride. The route should have been about 70km, but I actually rode for 80km. If you look closely at the map below you might just spot a couple of significant ‘there and back’ incidents between Bury and Middleton. Considering the length of the route, the ascent data of about 400 metres really indicates a basically flat route. In fact it’s all downhill from Middleton. It took me a most enjoyable six hours. 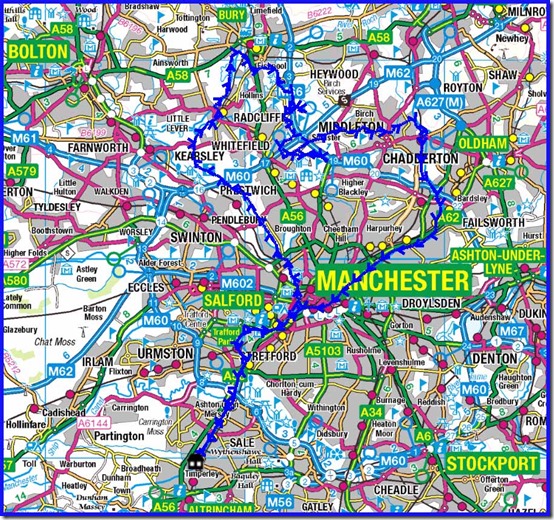