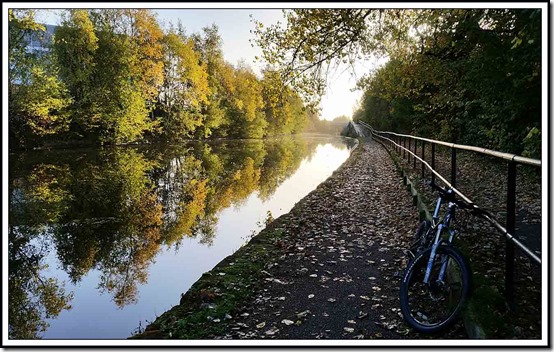 Another lovely sunny Monday morning enticed me out for a bike ride based on one I did way back in March 2013. The report on that one is here. I’m not sure whether the short slideshow will still work unless you are signed in on my Google account.

This time I headed along the Bridgewater Canal to Barton, by the Trafford Centre. The first two pictures were taken there. There were stunning reflections of autumn colours in the glassy canal. 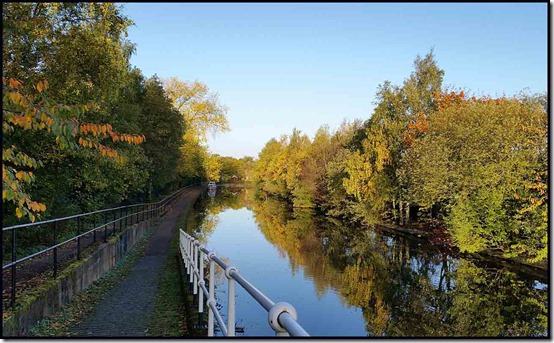 The canal was followed for another couple of km, into Monton. Here you could continue all the way to Pennington Flash along the towpath, which may be muddy in places. I did that last time. Today I decided to leave the canal and follow the disused railway loopline, the Monton and Roe Green Loopline. “Loopline” is just another word for ‘disused railway’.

A good surface ensures that this amenity is enjoyed by cyclists, walkers, runners and dogs. There’s plenty of room for everyone. In Roe Green the line splits, with the left branch heading towards Ellenbrook and Tyldesley. The right branch leads towards Bolton; I’ll explore that soon. 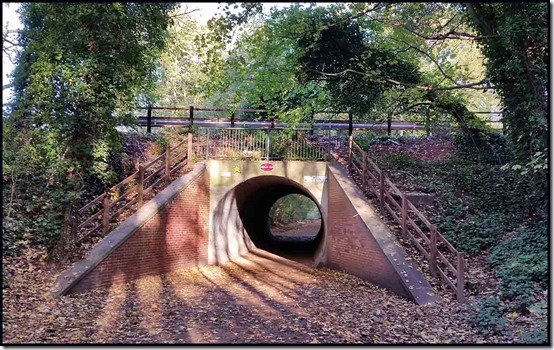 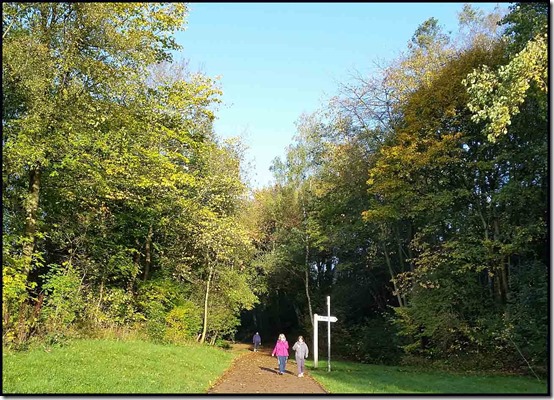 Between Ellenbrook and Leigh, the good surface takes you all the way to Leigh beside a concrete track designed specifically to take buses. The track is just wide enough for them, and there are ‘pits’ that swallow up any trespassing cars  that aren’t as wide as a bus. 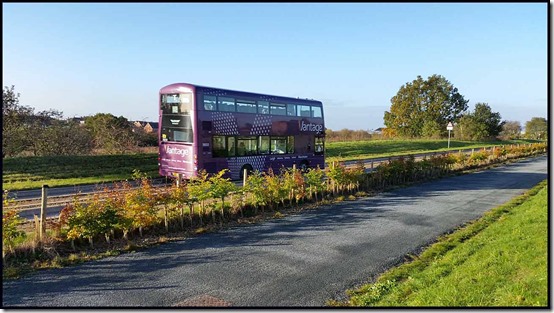 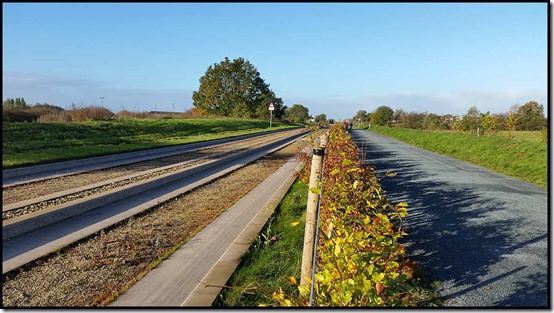 In Leigh town centre the Bridgewater Canal is re-joined, leading in about 3 km to Pennington Flash Country Park. You can cycle around the lake, and there’s a Visitor Centre, unmanned today, with toilets, and mobile food kiosks outside.

It’s a haven for bird watchers. I stopped for a cuppa by the southern bank of the lake, where tufted ducks were competing for attention with a small white headed duck that I couldn’t identify. 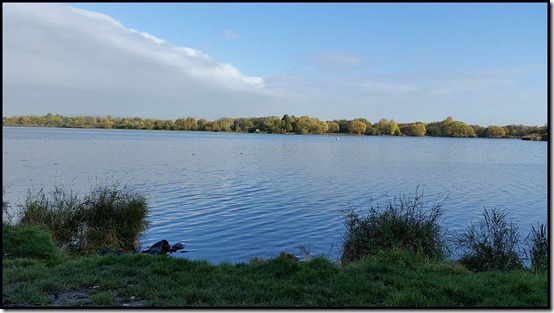 It’s worth a separate visit for bird watchers. Here’s what one person spotted last Friday:

I saw quite a lot of the above-mentioned, plus a Grey Wagtail that I don’t see on the list.

It’s a little over 30 km to this point; shorter by the canal towpath route. There follows about 9 km of cycling along roads. They are mostly quiet, but the challenge is to find some off-road alternatives to this section of tarmac. Some research will be needed. After that 9 km, the route is all off road on mostly good surfaces. Any bike will do – you don’t need a mountain bike for this route.

I went along minor roads through Golborne and Newton-le-Willows to reach the Sankey Canal at the Mucky Mountains Nature Reserve. I visited this, and wrote about it, on 3 November last year.

Here is Hulme Lock, on the very much disused Sankey Canal, from a different angle. 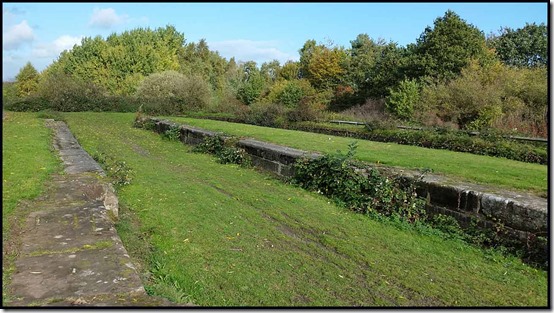 The route continues easily, alongside the disused canal, which eventually seems to mutate into the St Helens Canal, and beside Dallam and Sankey Brooks. There’s plenty of weed in the canal, where a heron was fishing as a swan paddled past. 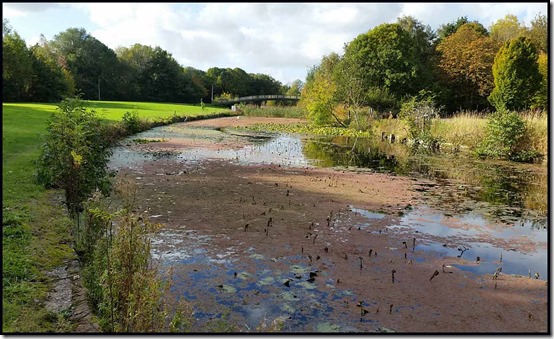 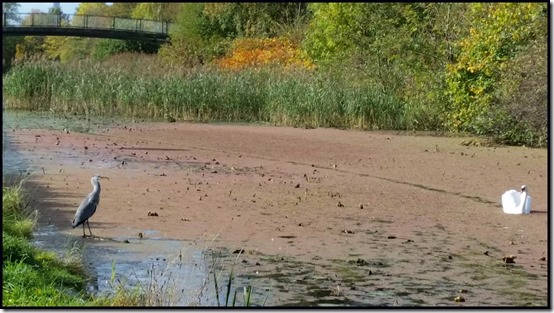 After finishing my flask of tea in a quiet spot on a bench in a memorial forest where trees have been planted in memory of the sadly departed, many of them having enjoyed rather less than a ‘full term’, I joined the Trans Pennine Trail near Sankey Bridges, and followed that all the way to the (remains of the) Bay Malton at Oldfield Brow, leaving the last 3 km to the canal towpath back to Timperley.

En route, the Manchester Ship Canal was crossed, and the disused railway line from Grappenhall was very picturesque, with the bright sunshine glinting through a tunnel of tired greens of late summer. Neither of the next two pictures captures the aura – the S5 camera isn’t that good. 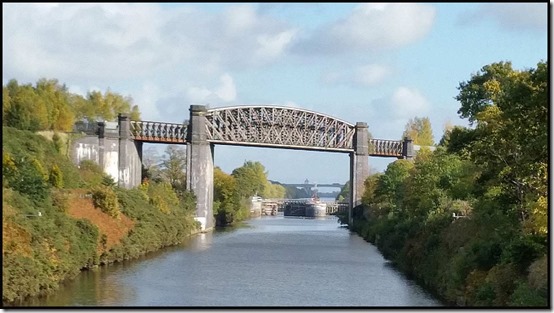 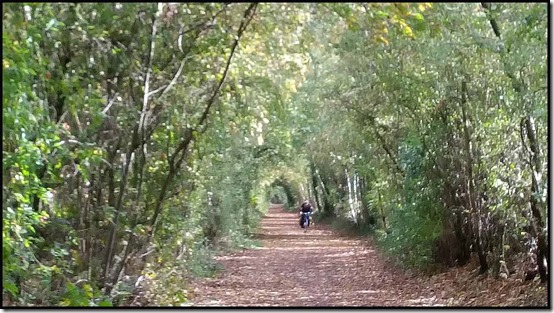 It must have looked so different when the railway was operating.

The next two pictures show my route, neither of them very satisfactory, but anyone wishing to follow in my tyre tracks shouldn’t have any difficulty in working out where I went. Both Garmin (GPS) and Anquet (mapping software)agree that it was 72 km in distance. Garmin reckons 186 metres of ascent, whereas Anquet calculates 566 metres. I reckon about 300 metres. That means it’s basically a flat ride. It took me about 5 hours, including stops. 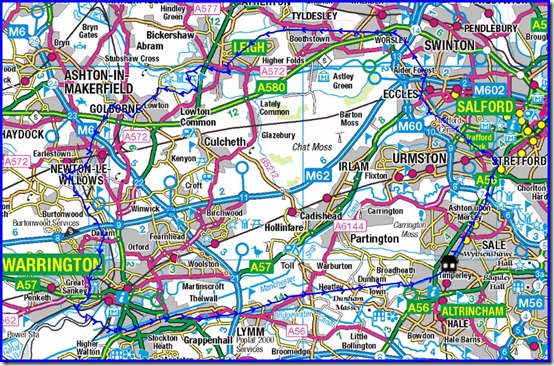 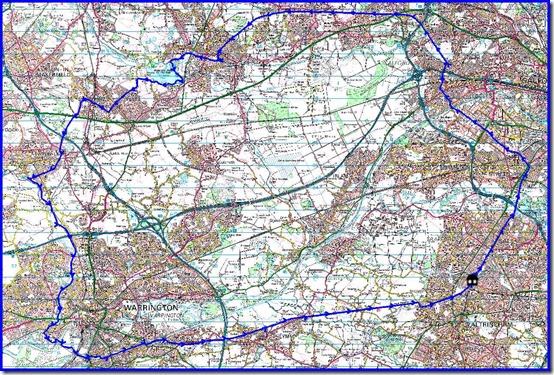 Another excellent ride, to be repeated next Monday (29 October) with anyone who would like to join me. Meet 8.30 at Timperley Bridge.

Another interesting and varied route. I was taken by the bird list - it reminded me of a post of my own - 7th November, 2013, Extreme Posting. Here is an extract with my cynical observation.

Last Sunday Gimmer and I walked up Littledale, on the northern edges of the Bowland hills.

Google revealed a twitcher who had visited recently recording this list:

Now, who’s kidding who? I think he must have spent a year up there.

Thanks Conrad. The numbers recorded beside Pennington Flash include several 'lots', so the total count was probably in the thousands, albeit the Grey Wagtail was not amongst them.

One of my regular walking pals in 'the old days', Laurie (RIP) used to record the number of different species seen during a walk. I think he once got up to 100 or so on trip to Silverdale on a winter's day. Or was it 50, my memory is a bit vague - I'll add another comment if I find the relevant diary entry.