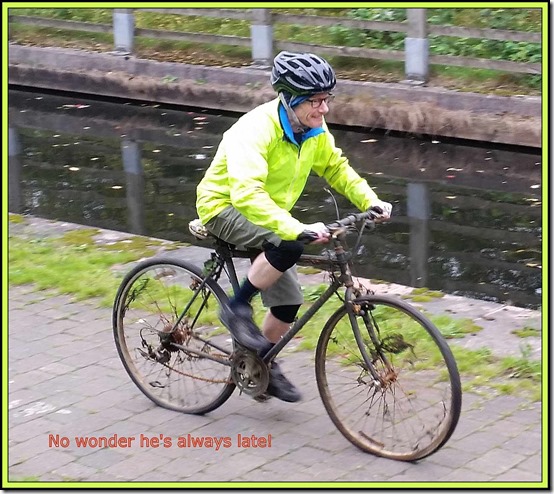 This was a successful adaptation of the route I took on 28 September, marred only by the fact that Richard turned up on a rather grotty bike.

It’s a straightforward route along the Bridgewater Canal into Manchester and across Regent Bridge to join National Cycle Route number 6. That route sticks to roads through Salford. We successfully deviated beside the River Irwell where Manchester Racecourse used to be situated. Nowadays the area has been turned into a flood defence zone and is populated with a very happy flock of Canada Geese. Grey Wagtails, Mallards and Herons were seen by the river.

The photo below looks across the flood zone to Kersal. 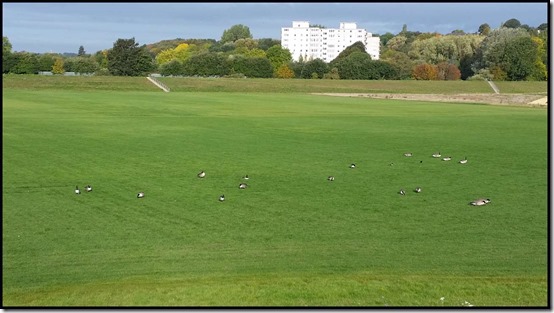 As well as Richard, Paul had turned up. He excelled himself by pulling another slightly less dubious bike out of a hedgerow for Richard to utilise in his bid to keep up with us. (He was exhausted after having gone for a run with an elderly lady, Ann-Marie Jones.) 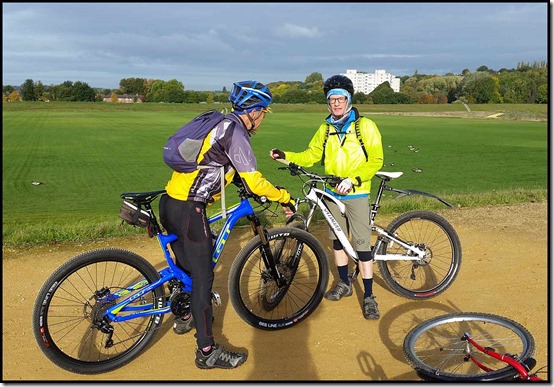 All went pretty well on the route to Bury. I decided to leave Route 6 by a large sculpture at SD 775 060, to continue along the Sculpture Trail with the intention of crossing a footbridge over the Irwell and taking a path to the left at SD 774 065, to reach the disused Manchester, Bolton and Bury Canal. It was a good path to the bridge, after which I missed the intended footpath and we finished up taking the path at SD 778 068, a push through a thick jungle of tangled brambles, to reach the canal. (Sorry, folks.)

However, this avoided the roads of Radcliffe and led easily to the A56 in Bury. En route we enjoyed a chat with two very serious bird watchers, whose idea of “everyday birds that we see” included some species that I’ve never managed to spot, such as Water Rail. They showed us some impressive photos.

The A56 wasn’t followed for very long, but it did sport an excellent café that was most welcome after 30 km of cycling. 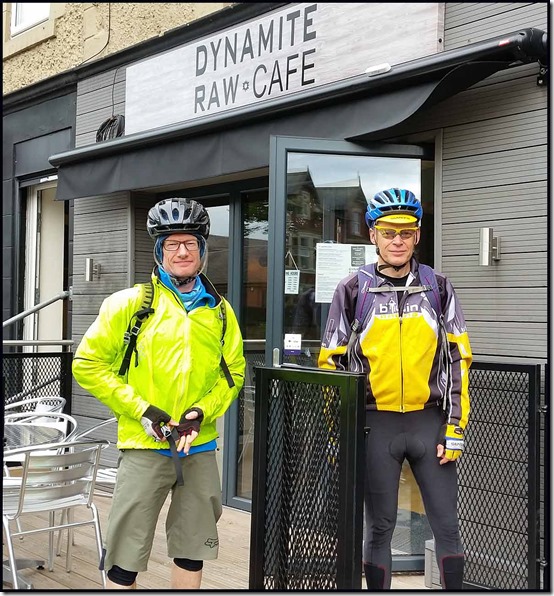 I’d actually planned to stop at the football ground café a little further on in Gigg Lane, but it’s just as well we stopped where we did as the Gigg Lane fleshpot appeared to be the scene of a very well attended biker’s funeral.

After that we made our way across north Manchester, passing very close to Birch services on the M62. We could have entered on our bikes through the back entrance; I’m not sure how that would have gone down!

After a section of unavoidable but quiet roads, but otherwise excellent bridleways, we reached the Rochdale Canal at SD 884 079 without incident. I remembered a bench that would have been suitable for another drinks break, but it was occupied by a strange individual who appeared to be walking from Manchester to Rochdale. He lay on the bench and entered into a discourse with us that Richard aptly described as “a stream of consciousness”. Whatever he was on, he was friendly enough. We soon left him to continue in his quest for a meaningful life, and we found a good spot for our own break a little further on, on a grassy bank.

It’s a scenic and straightforward route into Manchester along the towpath, downhill all the way through a series of locks.

The Ancoats area sports this large piece of graffiti.

Castlefield, and this view from Merchants’ Bridge, soon followed, before the ‘stick of the lollipop’ route along the canal towpath back to Timperley and beyond. 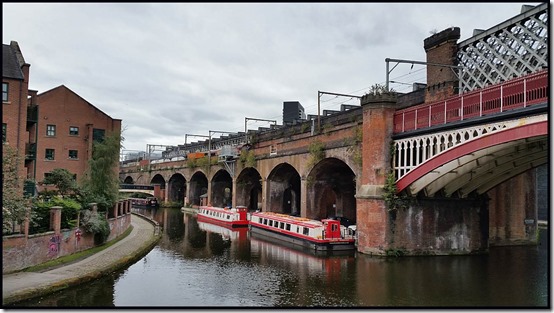 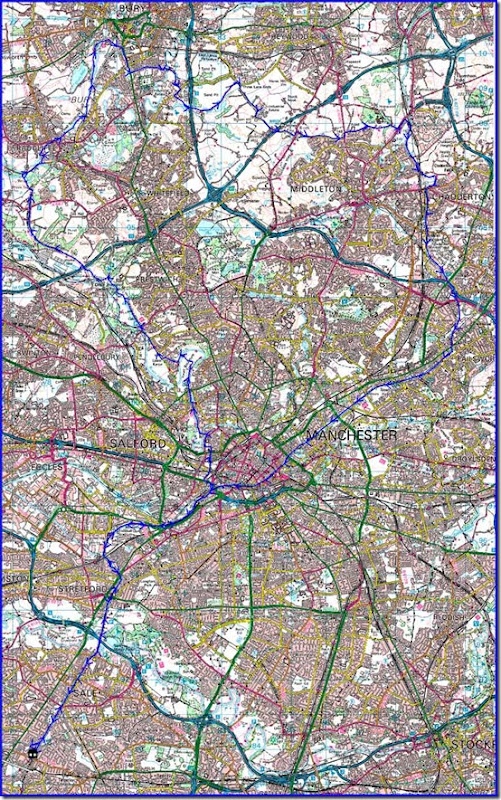 Thanks for your company, gents, and see you again soon.