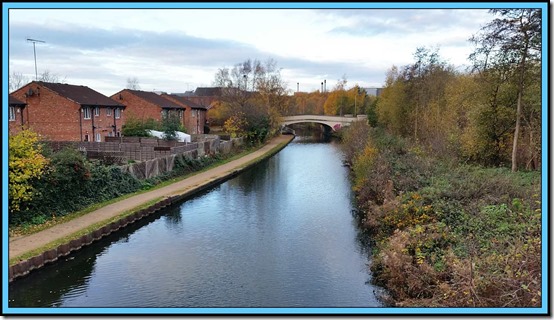 Richard, Paul and I last did this 71 km ride on 8 October – report here.

Today Richard was replaced by Jeanette, so we went a bit faster. Except where there were cobbles.

Previous reports describe the route, so today I’ll just offer a few photos. Above is the view from the bridge at Waters Meeting. This is where the original canal, from Worsley to Manchester (1761) was extended to Stretford, Sale, and onwards to Runcorn, over a period of several years following Royal assent in 1762.

Below – the view from Throstle Nest Bridge towards Pomona and the new Metrolink line being constructed to the Trafford Centre. I’m not sure where the original Bridgewater Canal ends and the Rochdale Canal link – built after the construction of the Rochdale Canal in 1804, starts. Perhaps at the locks in Castlefield. 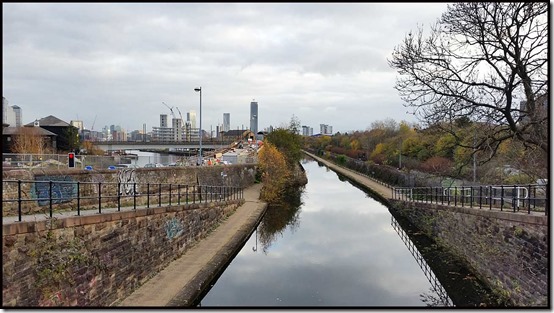 We joined Sustrans Bike Route number 6 in Salford and followed it (more or less) all the way to Bury.

Here’s one of the iconic buildings of Salford that’s nearly on the route. 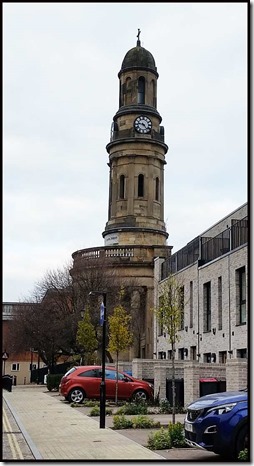 After a section of woodland in Prestwich Forest Park, we were granted a view of what Monday mornings of our comparative youth looked like should we have been trying to visit clients. The M60 was as busy as ever. 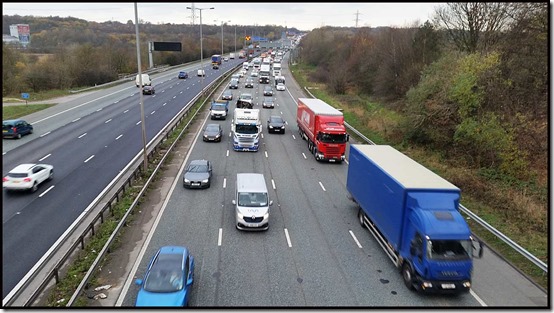 There’s a fair amount of woodland on the ride up to Bury, and the autumn colours are persisting nicely. 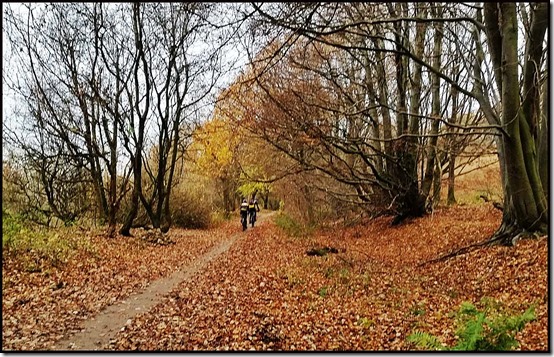 At the ‘Irwell Sculpture’ at the junction below, we took a left turn to join the Manchester Bolton & Bury Canal towpath by paths, rather than by the more tarmaced route of number 6. 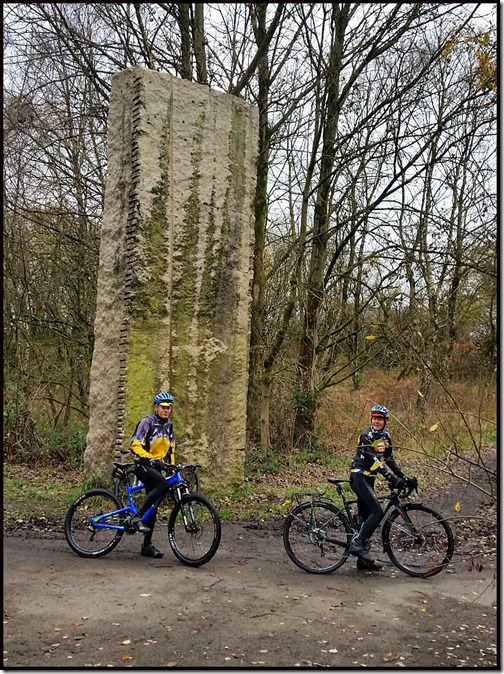 There was a 10% chance of rain. It rained. Coffee and cookies in the Dynamite Raw Café in Bury went down rather well. As did Jeanette’s scrambled eggs with spinach.

Mainly roads, with an interlude on a muddy path, took us to Middleton. The sun came out near Birch Motorway Services. (We could use the picnic benches there, and talk in loud voices about our experiences with the heavy and fast traffic.) 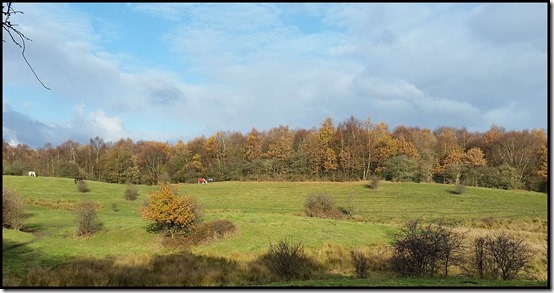 Eventually the Rochdale Canal was reached. Whilst there were no barges in evidence, the area that was drained last time we were here (in the Miles Platting/Ancoats area) seems to have been sorted, though some of the water levels are still very low. 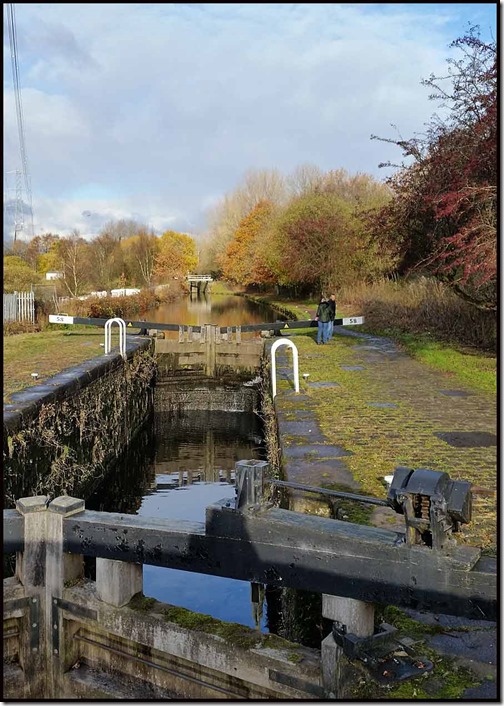 A pair of herons seemed to be fishing from the top of a fence, and further on a Canada Goose was standing on a submerged shopping trolley – one of many seen in the canal today. We also saw staff fishing out rubbish from the canal. A thankless task, I suspect.

There’s a footbridge in Ancoats where I waited for a while as it was preceded by some cobbles. Here’s the view towards Piccadilly. 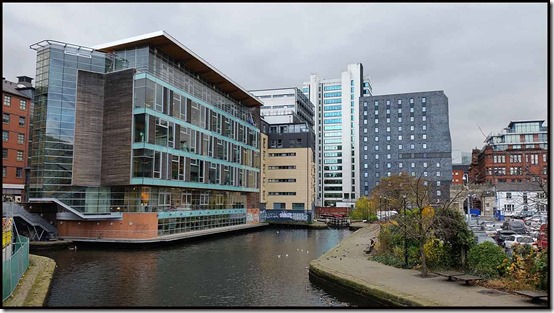 Looking back, you can see Paul and Jeanette approaching along the towpath. We split up briefly while I followed the canal – there were no towpath closures today, and the others took an alternative road route due to an excess of cobbles. Here’s the view from Castlefield, where I obliged some tourists from County Fermanagh by taking a group photo of them. This is probably where the original Bridgewater Canal from Worsley to Manchester terminated. 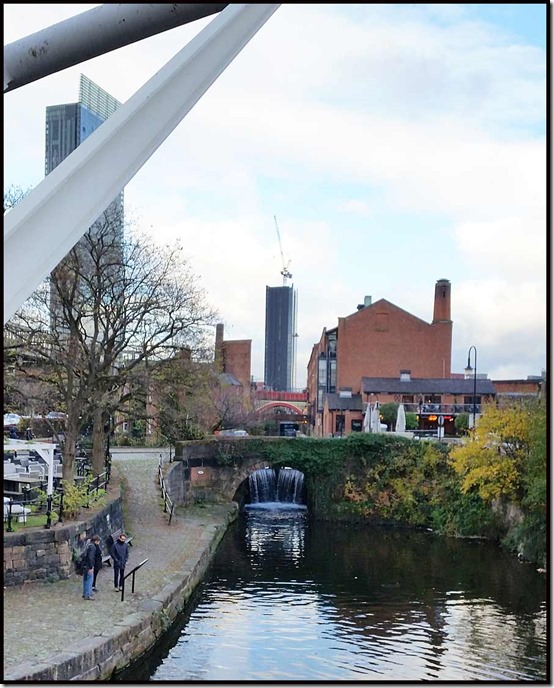 After that we soon picked up our outward route to return home. This final picture was taken in the Pomona area on the approach to Throstle Nest Bridge, near the point at which the second of today’s pictures was taken. 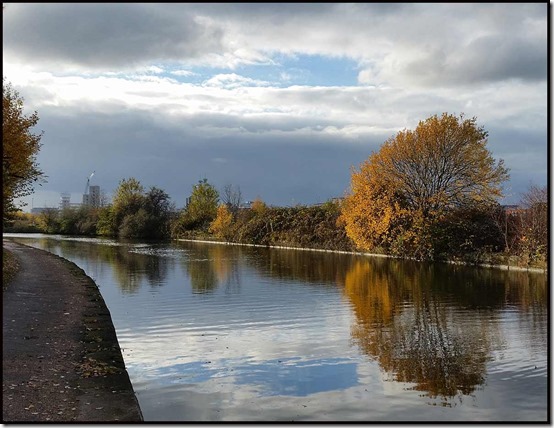