Last Friday morning's walk found just me and Paul S meeting at Stockport station. By the time I'd collected some tickets for a future 'mission' it was 10.30.
We ambled down to the fuller than usual River Mersey that accompanied us on and off until we reached Jackson’s Boat Bridge, near Sale Water Park. The first few km were spent on the familiar paths of the Trans Pennine Trail (TPT), albeit at a slower pace and in the opposite direction to our usual cycling route. Thus we had time to pause by some of the well maintained information boards that have been placed at regular intervals in the Mersey valley.

One of these information boards, from Kings Reach Bridleway where the above picture was taken, mentions the sandstone caves pictured across the river. These man made caves are thought to date from about 1670, in the days of Charles II after the fall of Cromwell. There must have been quite a bit of digging around at that time, as it’s the year in which rock salt was discovered in Northwich. The main section of these Stockport caves comprises seven arches and various nooks and crannies. The caves were further excavated before WW2 for use as civilian air raid shelters. Work on these started in 1938 and the first set of shelters was opened in October 1939. Quite timely, as Stockport was bombed in 1940. They are now sealed up and left as they were when in use, with benches and bunk beds intact.

After passing under the M60 motorway, the TPT takes a break from the long loops of the Mersey by way of a shortcut through Didsbury. The route is punctuated by National Cycle Network signs, some of which date from before the TPT was opened in 2001. These signs are clearly being well maintained – see the next two pictures – and I believe that quite a lot of money has been put aside for the improvement of cycleways in the Mersey valley. 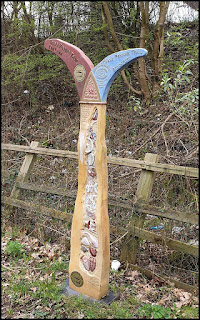 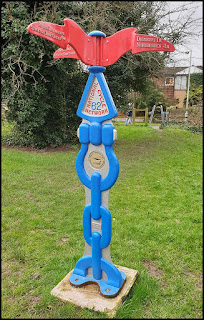 Paul and I re-joined the riverside path after wandering through Didsbury. We took care not to take an attractive looking (on the map) short cut across a golf course. JJ and I will both remember the day we tried that and emerged from the footpath that passes under the motorway at SJ 834 902. We got very wet! 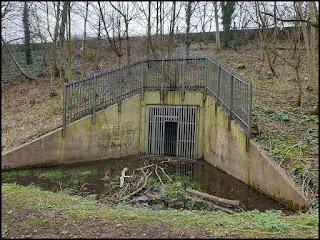 This stretch of the Mersey is home to cormorants and goosanders. At least, it was today. Kingfishers also live around here, together with a variety of ducks, geese and herons, etc, that also enjoy the environs of Chorlton and Sale Water Parks.

We left the Mersey again, at the point pictured below, to take a short cut through Northenden on unfamiliar paths, before returning to the river by Chorlton Water Park.

The weir in Northenden may be roughly the place where local landowner William Tatton was drowned in 1616, perhaps on his way home from a night out in Manchester, leaving his large Wythenshawe estate to his ten year old heir, Robert. But that’s another story… The weir wouldn’t have been there then, as the weirs on the Mersey weren’t constructed until the late 1700s, when mill owners built them to provide power for their nearby spinning machines. I'm not sure whether the parakeets we saw here today would have been there until fairly recently! 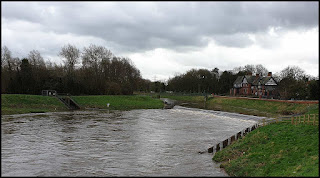 Paul and I concluded our walk by strolling around Chorlton Water Park, then beside the river to Jackson’s Boat Bridge, from where a pleasant path leads to Sale Water Park and a footbridge across the M60 motorway, which is 10+ lanes at this point. After that I found some footpaths through the ginnels of Sale that I’d not been on before!

Here’s our route to Sale Metrolink station – about 17 km with minimal ascent, taking around three hours.


I’m not planning a walk for next Friday, but I hope to see a few people on 29 March, if the world doesn’t end on that day – here’s the flier:

Friday 29 March
Around Winwick. Meet at The Swan in Winwick Village (SJ 605 928), at 10 am for a 9 km bimble. M62 jnc 9, then north to a roundabout where you continue towards Newton-le-Willows on the A49. After a few metres bear right into Golborne Road in front of Winwick church, and the pub car park is on the right. Use the top car park.

Robert Tatton (1606-1669) was the High Sheriff of Chester between 1645 and 1646. He supported King Charles I in the English Civil War and is perhaps best known for the ultimately unsuccessful defence of his family home, Wythenshawe Hall, during its three-month siege by a Parliamentary force in the winter of 1643/44. His family continued to be major local landowners until the mid 20th Century, when death duties and the need for social housing led to compulsory purchases and the building of many thousands of homes on the Tattons' land. Wythenshawe Park, where ironically a statue of Oliver Cromwell overlooks the Hall, is a remnant of park land, with a circumference of about 5 km, amidst all the council houses (and former council houses), of which my son owns one in Northern Moor.

Thanks for that. A not uncommon biography. I was hoping for squandering of the family fortune and scandal. Ah well...

He did well to continue with the family estate after the demise of his king.

I've just done a bit more research and came across a wonderful euphemism - I was of course aware of the usage of the word, but it just jumped out at me here in an account of the siege of Robert's home.

"The siege ended on 27 February 1644 after the Parliamentarians brought two cannons from nearby Manchester, with which they "reduced" the hall."

We had an hour's talk last week at Stockport Walking and Outdoors Group, from a descendant of the Tattons. Very interesting - he related a brief history of his family through the ages, starting in about 1066.

Similar to our own less affluent family that goes back to before the marriage of Rainaldas de Balliole to Almeria, in 1082. That's about 25 generations. Had my father lived, he may well have attempted some family 'sketches' spanning some of those generations, in addition to his 'Stubbs Family of Burston' booklet that covered fourteen selected persons from four generations during the period 1735 to 1947.