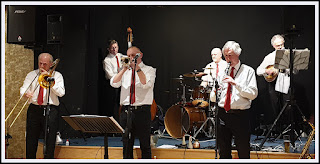 Another entertaining evening at Eagley Jazz Club, where we were pleased to be joined by Paul and Julie after mentioning this to them on Saturday.The Aire Valley Jazz Band is one that failed to appear in January, thanks to a malfunction of the M62 motorway, but I have seen them before.
One of the highlights of the band’s performances is Rod McNamara’s exploits with his drums. He recalls…
"I began playing some sort of drums - knitting needles as sticks and tin cans as drums at age 7. I swapped this interesting collection for a drum kit when I was thirteen and got to deputise at a local Working Mens Club. There was no recycling then so the needles and cans went on the local tip.”
Here he is with one of his drum solos. 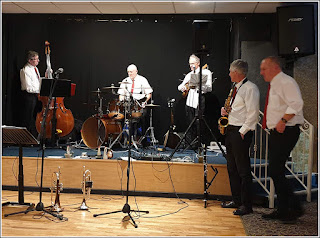