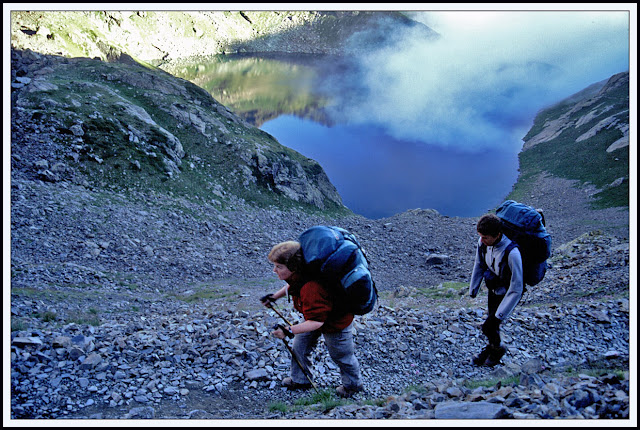 Snore Zone to
Fantastic day with 3000 metre peak and epic finish above Hosp de Viella – 10.25 hours, 11 km, 1200m ascent
We enter , leaving French cloud behind.  Climb up a beautiful valley under the Maladeta massif and up to the highest col of the trip at 2928 metres.  From there, only 15 minutes to a summit at 3010 metres with magnificent views.  The descent was tricky – a vertical scramble then steep snow – made camp at 6.30! 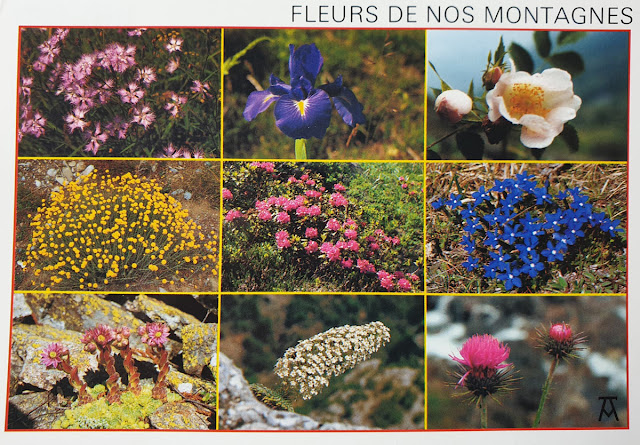 Diary Entry (by Sue)
We slept ok at the 2200 metre refuge, getting up just after 7 am. Outside, there was cloud, but it was thin, giving occasional partial views of the mountain tops above. Breakfast at 7.30 - bread, jam, and a sort of cold bread and butter pudding.
Once on our way at 8.20 (Sue and Julie are pictured above), the cloud cleared, and it was only a short climb to the col  - Port de Venasque (2444 metres), past the lakes.

This is on the border, and the view into is completely clear. Ahead, the Maladeta massif with its glaciers.
We then take a grassy pass down to a plateau. Then a zigzag path down to a road, where we see a full coach every half hour or so.
During a stop for changing into shorts, mountain mix, etc, Martin's rucksack rolls a few times down the hill - he misses the entertainment! Not long on road, and another ascent begins. The valley and the day are really beautiful, and so think the tourists walking up to the Trou de Toro, where the blue river disappears underground. Martin even has to tap someone's ankles to be able to get up the path!


There is a lovely (Aiguallut) cascade, with a backdrop of the Maladeta massive, before the green plateau, where, fortunately, all the tourists stop. Today we all feel privileged to be in such a wonderful landscape. Our path weaves up the rocky hillside, with streams and small tarns, and behind, we had a view of the pass crossed first thing.

Despite the clear blue sky, the wind is cold and we escape it behind a rock for a brew and lunch, next to a stream. I use the opportunity to wash underwear and hang it off the rucksack to dry. 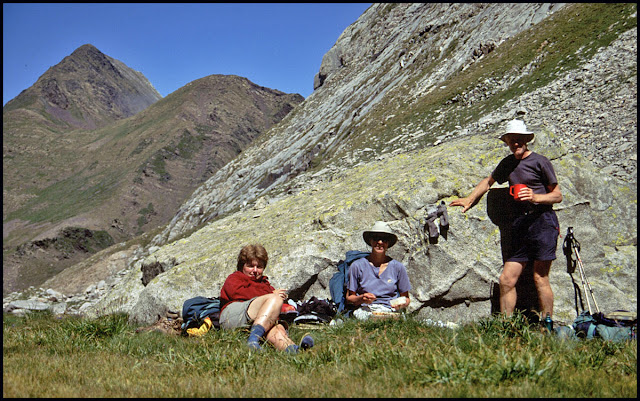 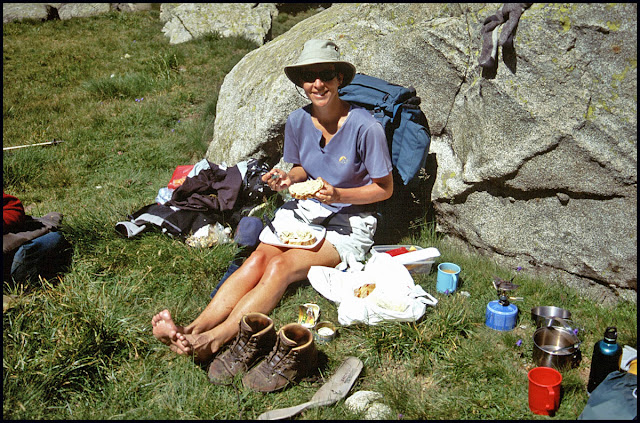 The afternoon proved eventful. The path reached a tarn, where a Spanish couple were helpful in providing a weather forecast, and guidance for our next section. Despite intending to turn round where we met them, he overtook us, not being able to resist the temptation of a peak! The Col de Mulleres was the next goal - it was the highest pass we could see, and will probably be the highest of the trip at 2928 metres.
The terrain was solid rock, with some sections of boulders. 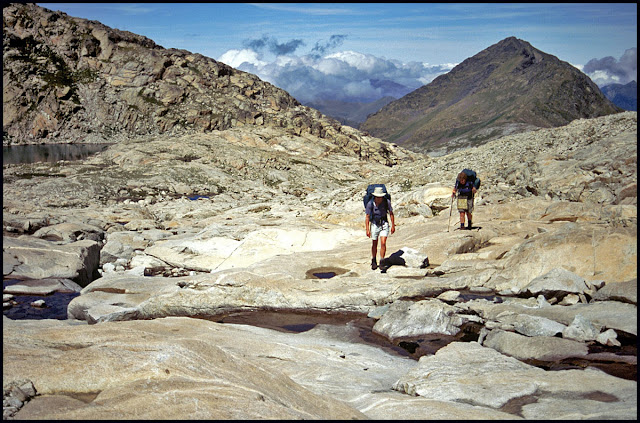 The path was cairned, and after seeing no one for some time, there suddenly seemed to be a few folk around. We stretched calves on the sloping rock, for what seemed like ages. It was hard going on the final section, contouring on large boulders, and we finally reached the col at 3.30 pm.
After some rejuvenating mountain mix, the rucksacks were left at the col, and further guided us for 15 minutes to the summit of the Tuca de Mulleres, wear a cross marks the top at 3010 metres. The view was stunning - cloud in France, spilling over the border ridge, and clear in Spain to the Maladeta massif and the lakes below, where we planned to camp. 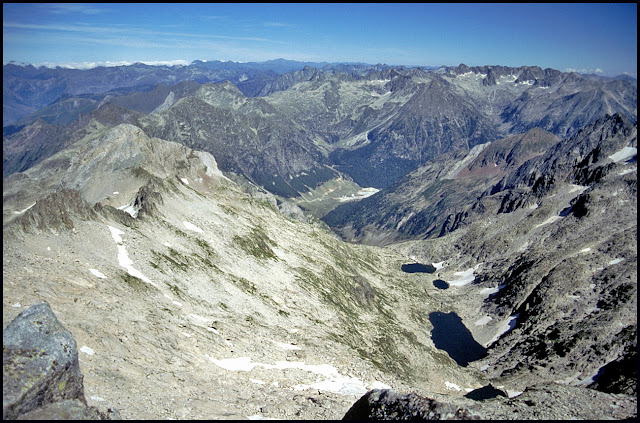 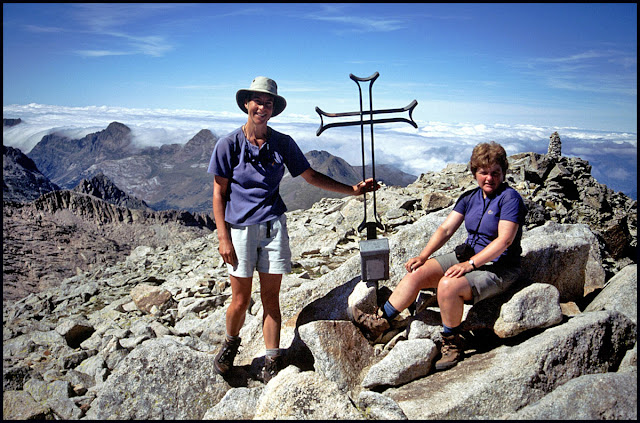 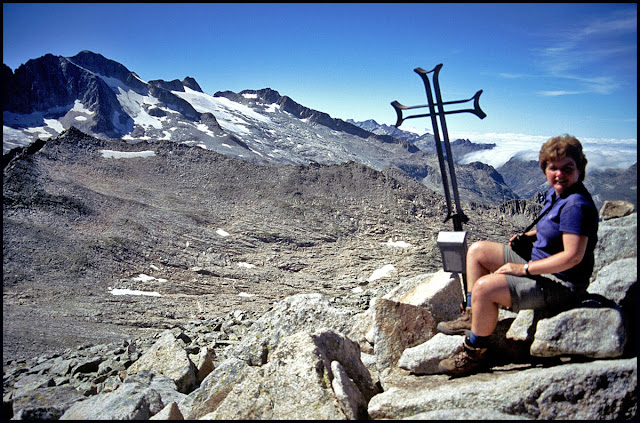 The view east showed the size of the mountains decreasing! Getting back to the col gave us no difficulty, but then the route became tricky. Whilst Martin tried one way, Julie and I tried the direct descent, following the waymarks and scrambling down vertical stretches of rock, then down a steep, but small snowfield. 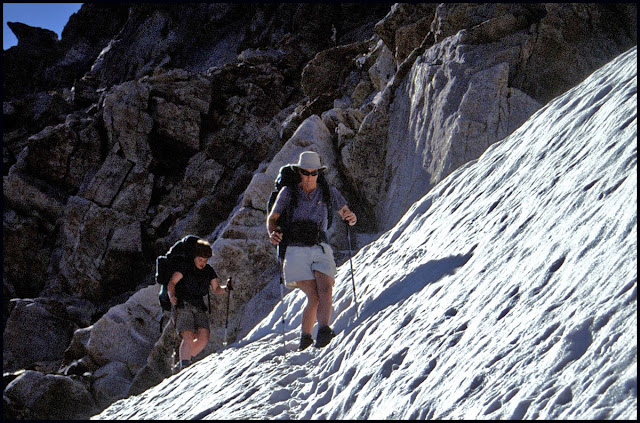 Eventually, an hour later, we were in a position to continue the descent, with Martin's trousers in a state, and our nerves jangled. A rough, steep descent for a further hour before we pitched at the highest Mulleres lake (2450 metres), at the first opportunity (6.30 pm). 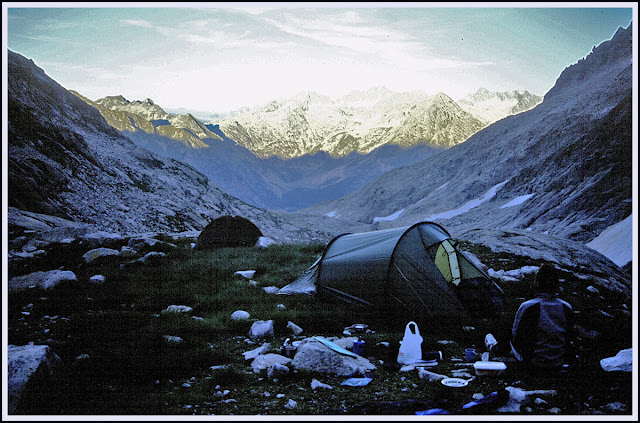 The sun had already gone, but we sat outside on this still evening, to cook soup, and pasta with ham and chorizo, and as we drank hot chocolate, the sun set from the mountains we looked across to. A fabulous day, with a sting in the tale. Saw good animals too, a stoat, deer high on the rocky peaks, and marmots. Bed 9.30 pm.
Stats and route (Viewranger):
15 km, 1400 metres ascent, 10.25 hours 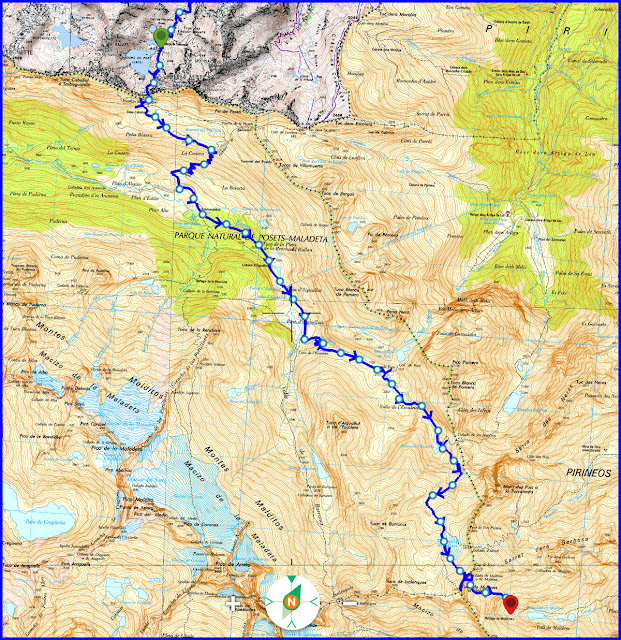 Next Posting
Previous Posting
Index
Posted by Phreerunner at 22:35

Just when you think the Pyrenees are spectacular the whole thing goes up a gear on a day like this. I did a more modest peak ascent on my trip, but with similar dodgy sections and at one point I remembered my promise to my daughter before I departed to be careful, and there I was slithering down a rocky chimney onto a patch of snow with drops below and saying to myself "what do you think you are doing'" Including a peak gives one a completely different kind of day. Brilliant.