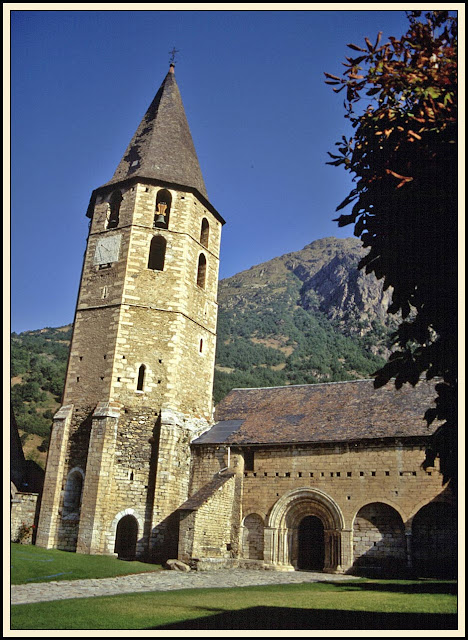 Sue and Martin's Big Adventure
Day 36 - Monday 30 August 2004 - Stage 28/29
Postcard Summary
Hotel Deth Pais to Below Coll d’Airoto
Successful haul of a week’s provisions up a nice hill – 7.5 hours, 15 km, 1500m ascent
Slow start after a huge breakfast at this nice hotel (despite its name).  The “supermarket” – more a sort of corner shop, didn’t open until 9am – we then loaded up a week’s provisions, including 17 tins of fish and pâté, lots of pasta, lots of “mountain mix” (fruit and nuts), 8 bars of chocolate, 2 packets of muesli, etc, etc.  The walk up to Coll d’Airoto was steep.  The guide book advised against being heavily laden.  We made it in nearly guide book time, but it was hard work.  A steep direct route to a summit, then a ridge, then finally dropping 100 metres from the col to a small lake at 2400 metres.  BLISS. 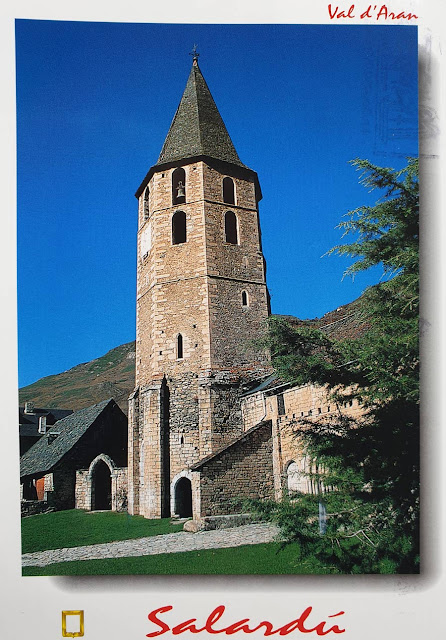 Diary Entry (by Sue)
Now back up to about 2400 metres, keeping away from the mosquitoes inside the tent (the sun has gone anyway at 7ish), at a silent wild camp by a small lake.
There was a leisurely start to the day with breakfast at 8 amongst a small, but noisy group of Germans. Made the most of it, having muesli, bread, cheese, ham, salami, then toast and jam.
Then, a trip to the small 'Supermercado' which opened at 9 o'clock. We have decided to save ourselves a day by carrying a week's food, amounting to 5 breakfasts, 8 lunches and 5 evening meals. Plus, of course, chocolate (one bar a day) and increments to the mountain mix. €73 later, the shopping seemed to weigh a significant amount! Maybe the tins of fish... ? It all seemed to fit in and we left the hotel in sunshine at 10.30 am.
We were concerned about the weight of the rucksacks, but soon discovered that it was fine with a steady pace and hourly rests. A lovely old track led up past the hamlet of Unha to the . Here we were misled by an old sign to 'Correos' (Post Office), and wandered around the old village in vain, but it was lovely with old stone houses with shutters and plenty of flowers. 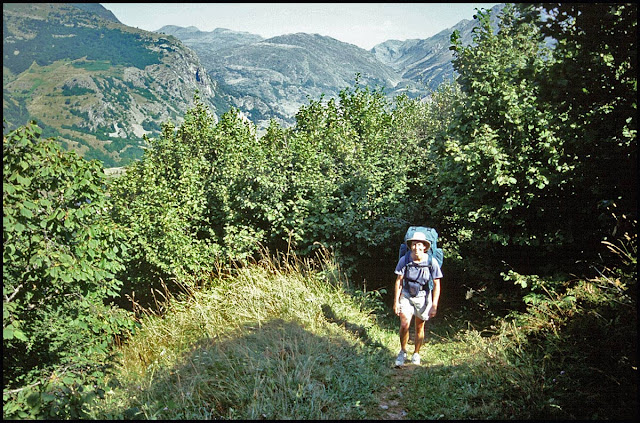 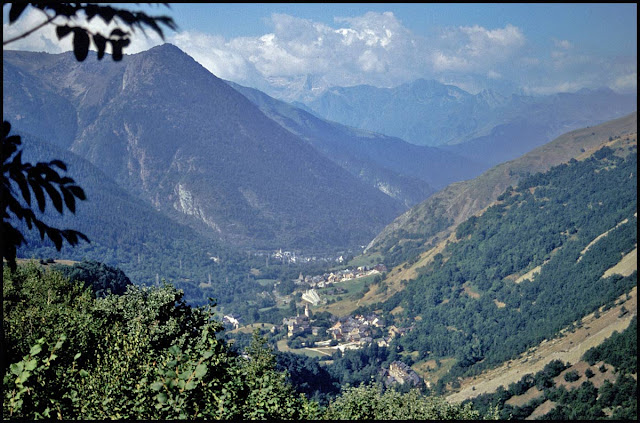 The view back to Salardu﻿﻿ 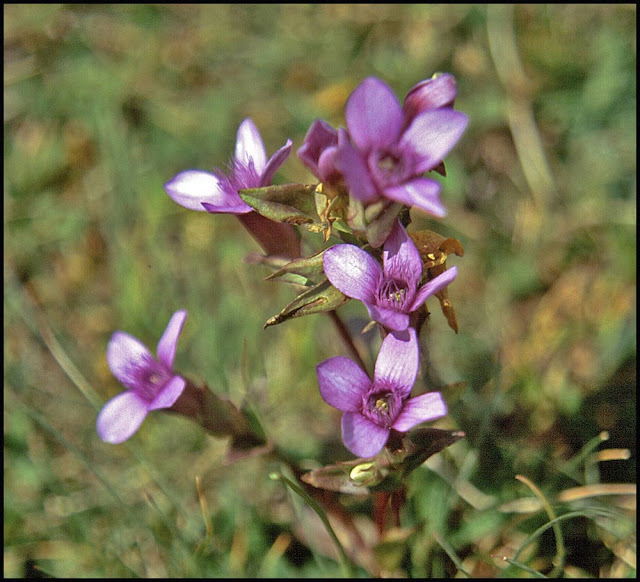 There are a lot of new buildings in these villages but the old parts still retain their character.
Onwards on a narrow zigzag path, then a track up to the Plan de Beret, a ski area. Below, two huge complexes of buildings, the new ski resorts.
At last, about 12.30, onto a small path in sparse pines, to climb up to the Estany de Baciver. See a few folk on the path. Lunch before the dam - I had eaten a few raspberries before, and had a handful of bilberries after! A brew, and bread and pâté.
Above the lake, the path was a delight. Not climbing too steeply, it was surrounded by purple heather and purple field gentians - clusters of flowers. The scenery around the two Estanys Rosari de Baciver was reminiscent of the Glyders or Y Garn in Snowdonia - rocky mountains with scree. 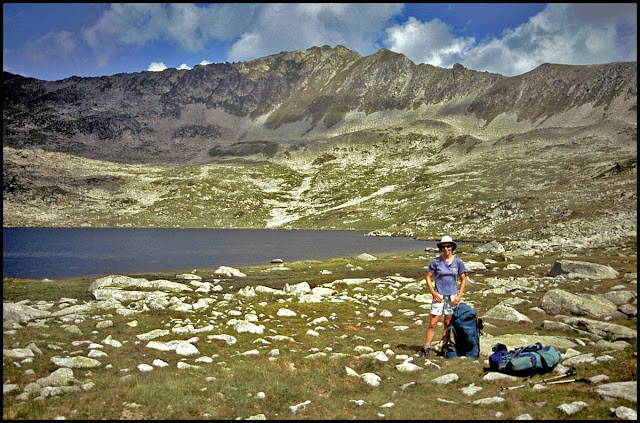 Martin had forewarned me of a steep climb to the summit of Tuc de Marimanya (2662 metres), and he was right. Without a path, we climbed steeply on rocks and grass, in fact so steeply that using the grass to pull us up was helpful. Luckily it was only 300 metres of ascent! It was very satisfying to reach the summit.  ﻿﻿ 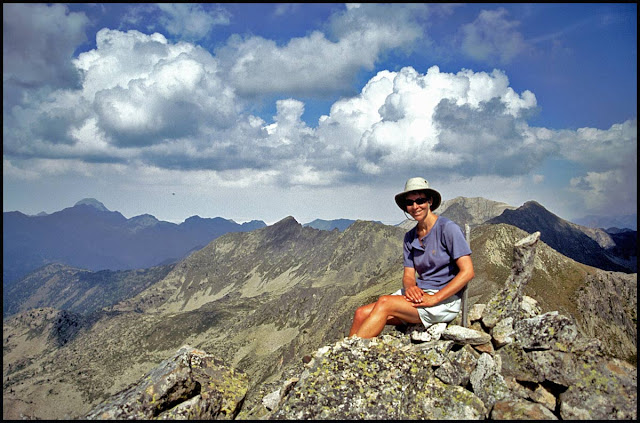 On the summit of Tuc de Marimanya

The view was extensive but very hazy - cloud was evident over . A superb, but bouldery, ridge walk followed, first to a summit only two metres lower, then down past a lake to the Coll d'Airoto. On this airy section, two eagles soared quite close.
A short but steep descent led to this camping spot, reached at 5.50 pm. The tent was soon up, and after waiting for purifying tablets to work on lake water (we still have a litre of unpurified spring water from earlier), soup was made. 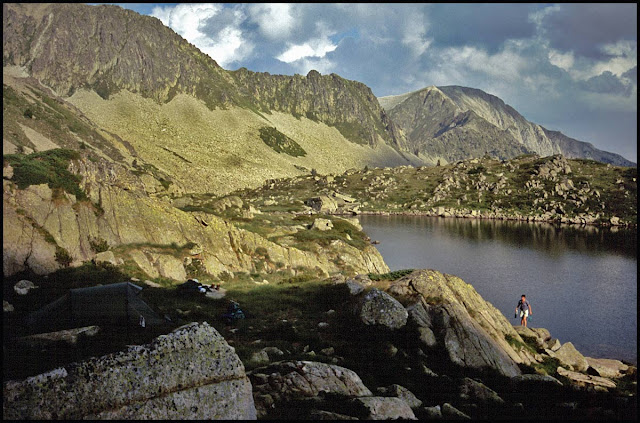 As no sauce mixes were available, we have pasta with seafood cuppa soup and frankfurters - a very acceptable dinner. It's now 8.30 - mint tea is brewing. With a piece of chocolate, this will be pudding. Time for a brief read to, I hope, before sleep.
Stats and route (Viewranger):
15 km, 1500 metres ascent, 7.5 hours 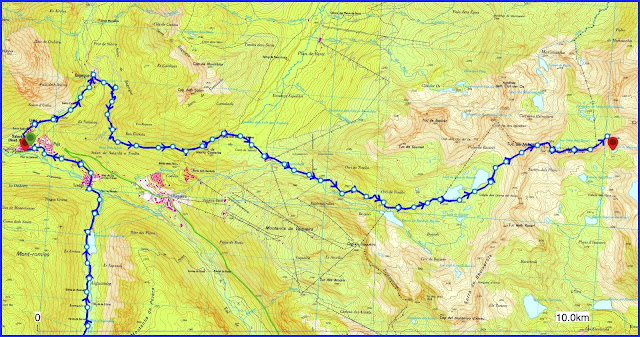