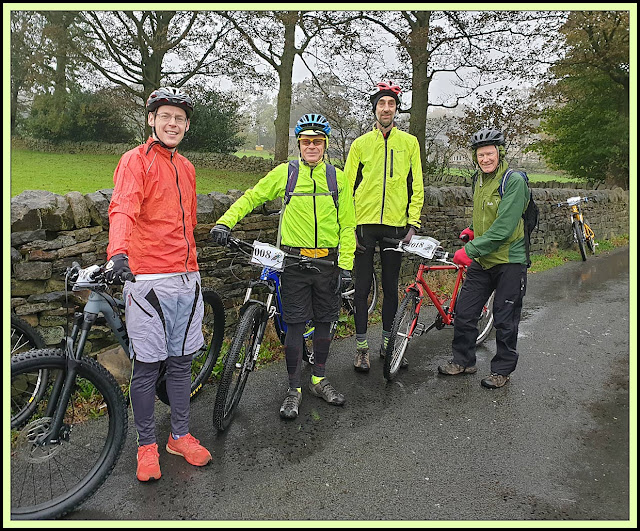 Just like last year, we managed to choose a wet day for this event. We are pictured above, at the start, before slowly succumbing to total saturation from a mixture of sweat, and water ingress. Luckily, it was not cold, or windy - there was just a persistent light rain that left the camera in my pocket until transferred to a dry set of clothes at the finish. Here, in the cricket club this year, we enjoyed a welcome pint, Greg sitting at the edge of the lounge as he was forbidden entry due to still being caked in mud. (Or is he concealing some sort of contagious lurgy?!) 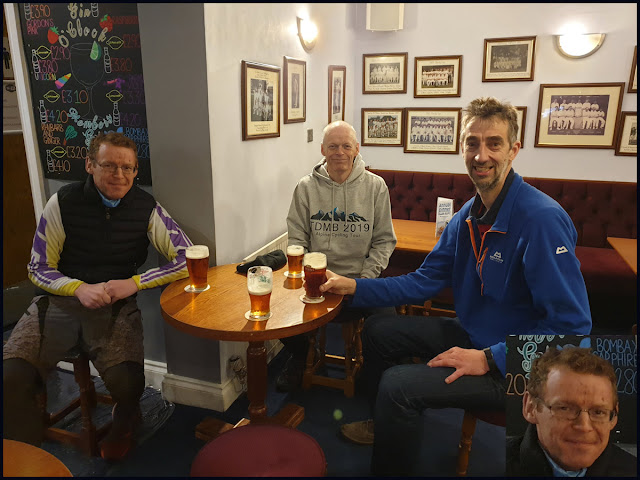 In between these two photos we had spent between 3 hours 24 minutes (Paul and Greg), and 3 hours 53 minutes (me) on the new 44.6 km course - a little longer than the old one - with 1100 metres ascent (as before). There were just two (very welcome) refreshment points, fewer than usual, as shown on the map at the foot of this posting. The route was very well signed - no need for a map.
Whilst the others used their modern bikes, out of tradition I used my 29 year old Shogun Trailbreaker, which finished up with a cracked frame after last year's event. Since then, it has been welded and re-sprayed, and as usual it performed well on this occasion - albeit a service is needed.
The new route involved turning left instead of right at Grain Water Bridge, where it was disappointing not to find the usual refreshment point. Instead, rather than the flattish road to Pecket Well, a steep hill (I walked up it) led to Stairs Edge. Then there was a long section over rough ground beside water conduits, some of which the organisers had needed to get special permission from the Water Board for the paths to be used for this event. Those with suspension (ie everyone else in the event) had a decided advantage here.
Robert had zoomed past me before Grain Water Bridge, having succumbed to a puncture near the start - otherwise he'd have been far ahead at that point.
Nab Water Lane was eventually reached. The juice, banana, chocolate and jelly babies were all most welcome at the support point. By now I think most people would have been soaked, and some were getting cold in the wet, rainy mist.
From here, over Oxenhope Moor on a quiet road, then an excellent, mainly downhill, route led to Luddenden Foot, where the A646 main road was crossed, and a final 200 metre climb was endured (most of us had to walk up a steep cobbled section) before a final glorious descent to the finish at Sowerby Bridge Cricket Club.
It was a fairly hasty beer for me, as those who had finished half an hour earlier had already feasted on the soup and rolls provided to finishers, and Paul and Greg needed to get home for an imminent birthday party. Which, as it was Paul's party, it would be appropriate for him to attend. I hope it went well.
Here's a summary of results over the years. 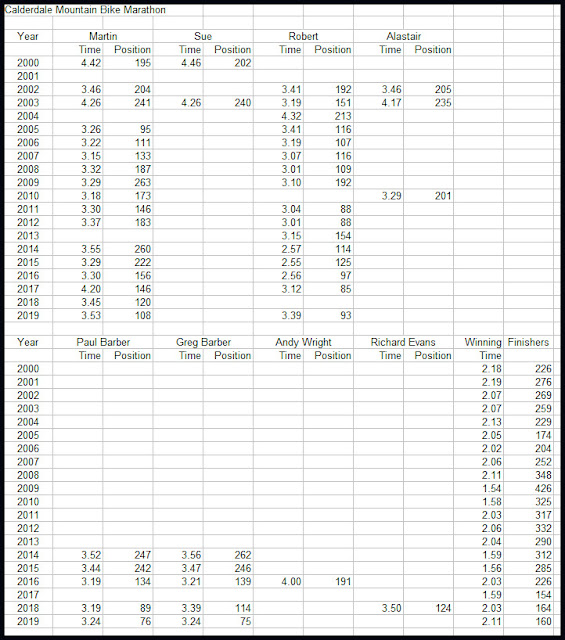 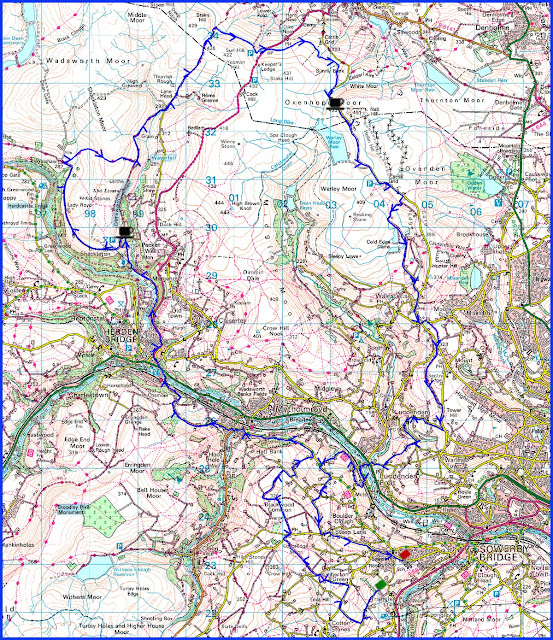 Other CMBM reports I have written are here, and the CMBM website with results etc, is here.
Thanks go to Robert, Paul and Greg for joining me on this event, and thanks, Paul, for the lift.