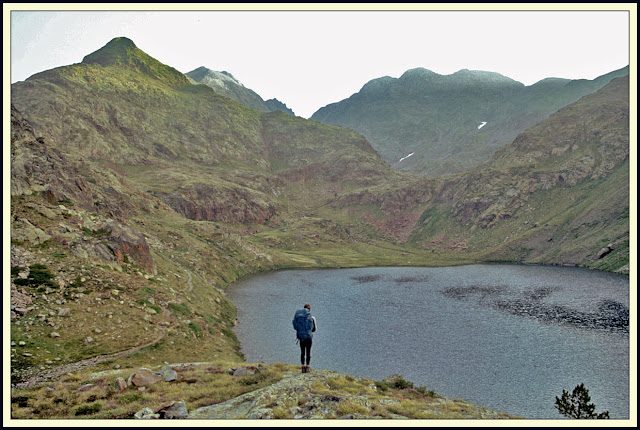 Looking back to Estany de Sottlo and Pic d'Estats
Sue and Martin's Big Adventure
Day 41 - Saturday 4 September 2004 - Stage 33 (continued)
Postcard Summary (on tomorrow's card)
Scenic Camp to Etang de la Soucarrane
Leisurely hike in fine scenery under a hot hazy sun – 5.7 hours, 10 km, 700m ascent
From wild camp to wild camp under a hot hazy sun – we decided not to climb the ‘optional’ peaks due to fatigue and dwindling provisions (although we started with enough for a week, including 17 tins). This was a good decision, as it got very hazy indeed and views would be limited. A separate ‘peak bagging’ plot is hatched for some future trip!  So we arrived at a lovely spot with fishermen across the lake and plenty of time to do washing, read books and cook a nice meal.


Well, it's not yet 4 o'clock and I can sit outside the tent to start this entry! We decided last night not to attempt the ascent of Pic d'Estats, due to fatigue and a provisions shortage. It really needs a day dedicated to climbing it, and Montcalm. It's the last of Joostens "10 classic summits", and we only managed Le Taillon on a 'day off' in . so a plan is hatched to spend a month in the , with the aim of 'bagging' these missing peaks.


We are actually quite pleased with the summits we have been up (quite a few), and there are more to come. The trip would have had to be extended to take in these summits. My 'planned' itinerary had some overoptimistic comments.

Anyway, we woke to a clear sky, and our neighbours by the lake flattening their tent for the day and heading off up Pic d'Estats. This seems to be the legitimate way of bivouacing for two nights. Gear left in tent, weighted down with rocks.
Despite a leisurely breakfast, we were away by 8.10. Lots of people ascending from Val Ferrera Refuge - the Saturday morning brigade. But they were friendlier than usual. A big contrast with the last three days though, having seen nobody of note, we now meet loads of people. Also, the camping spots have been completely unspoilt, whereas this one is obviously heavily used and (whilst we had an idyllic spot) there is considerable 'wild camping for the careless' debris.


It's a lovely morning but getting hazy with high cloud coming in. This builds up during the day, and the view from the peaks will have been very poor due to the haze. Best left for another time - decision vindicated.


There are some scrambly sections on the delightful walk down to the Val Ferrera Refuge (10.30 to 11.10). 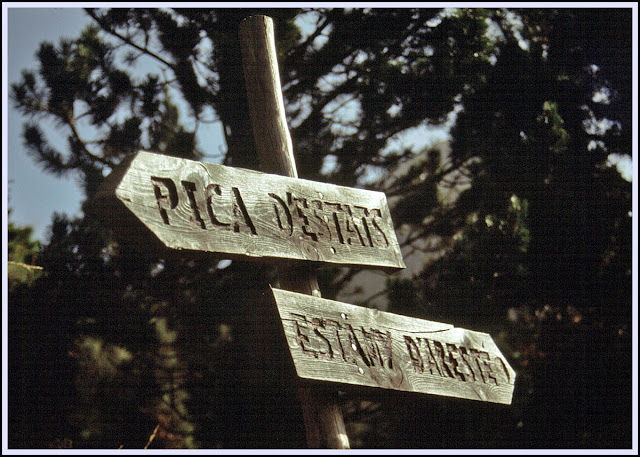 Signs above the Refuge


We meet a couple of French? backpackers on their way to Baborte. They are envious of our eight week trip. After an unexpected and pleasant contouring section, we descended to arrive unexpectedly at the hidden refuge, where water was replenished and we gorged ourselves on hot chocolate, crisps and kitkats.
Some English people had stayed on the 18th of August, having left Hendaye on 7th July. Rare. Then we headed off up to Port de Boet. The guidebook suggested Pla de Boet as a camping spot. It obviously was that, but you'd have to like cows! The ascent was easy, following yellow circles with black centres painted on rocks all the way, but the scenery lacked the vitality of that of the last few days. 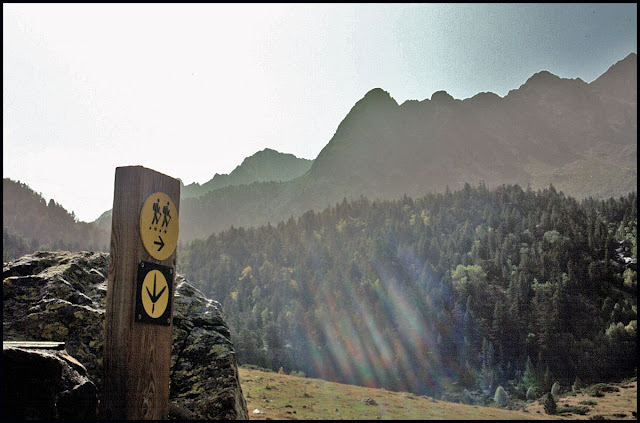 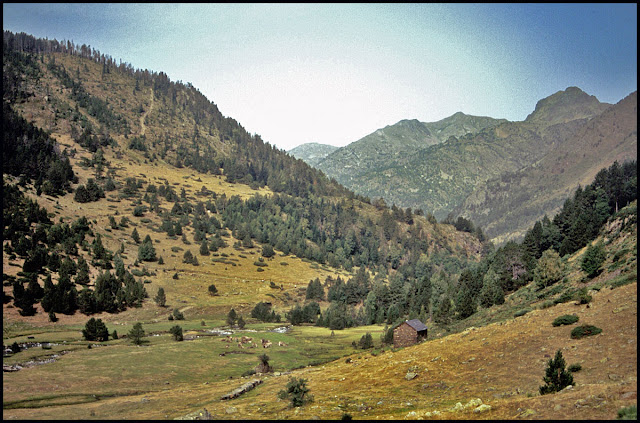 It was just a wide grassy valley, with cows, sheep and horses, not enclosed by mountains but surrounded by high and slightly more distant mountains than we are used to.
We found a nice spring high up and reached the Port de Boet at 1.20 pm. 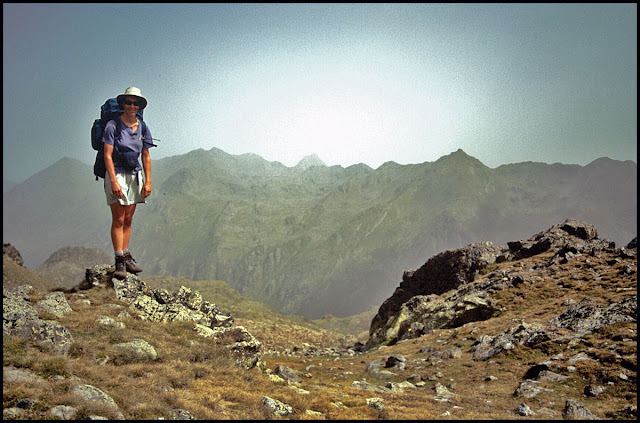 As it was only half an hour down to Étang de la Soucarrane (2292 metres) we descended to reach a nice camping spot by this lake by 1.50 pm. 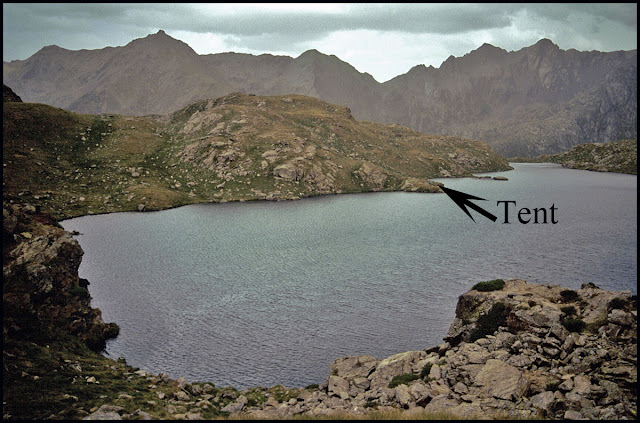 A short day with no difficulties! The cloud was building so we ignored the bivvy regs (no camping until 7 pm) and copied some fisherman by putting our tent up. Then lunch. Then washing - clothes and selves. Then fetching water from a distant spring. Then diary writing in a fair breeze, which is drying the washing. A short read and then it'll be time for tea. Wild flower book could come out, but there's nothing much in flower here! Sod's law. The last of three nights' excellent wild camping.
Now in for the first time since Venasque about ten days ago - and now, perhaps we won't visit again! Lots of reading and a nice meal - macaroni and tomato sauce with tuna etc, before bed by 9 pm.
Stats and route (Viewranger):
10 km, 700 metres ascent, 5.7 hours 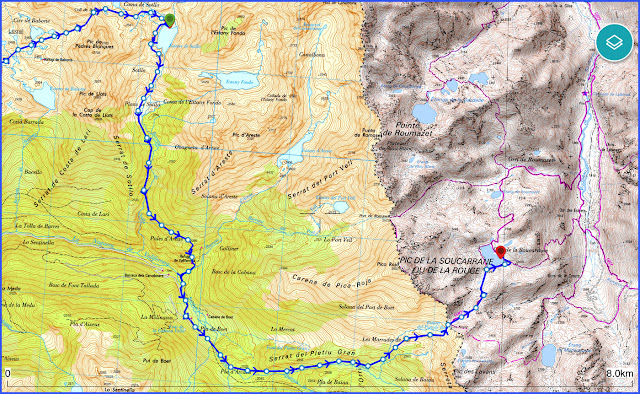 The last few days were similar to yours, Conrad, but we are not quite there yet...