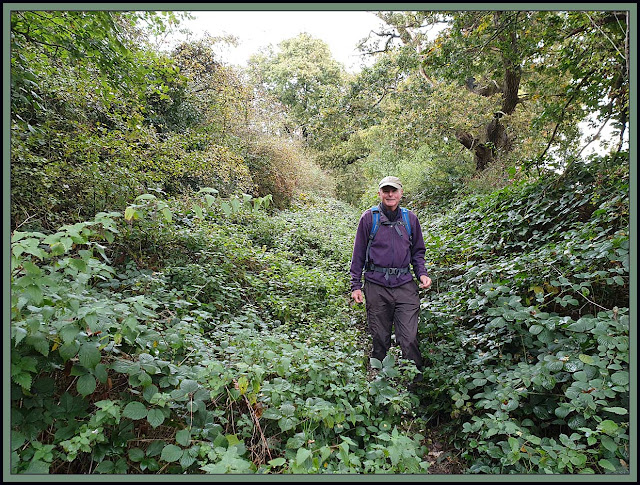 On a day when the forecast rain failed to transpire, Paul S and I enjoyed a pleasant walk from Guilden Sutton, where the Church Hall car park facilitates an easy 'Park and Walk', to Chester and back. We previously enjoyed a completely different walk from the same spot in September.
After passing the Bird in Hand, our route took a few muddy twists and turns before crossing an empty golf course and the A51 road. Then we turned down the attractively named 'Fir Tree Lane'. More like 'Bramble and Nettle Lane' it seemed to us. No wonder there weren't any dog walkers around.
We soon passed through the pretty village of Christleton, before joining the Shropshire Union Canal towpath, the canal looking a bit muddy today. 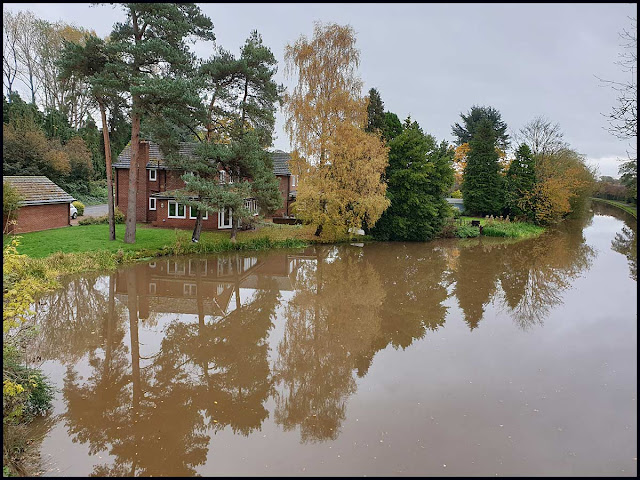 Our route now followed the towpath, 'Baker Way', all the way to the centre of Chester.

Canal maintenance was taking place, and we passed a large water tower whose historic source of water was the nearby River Dee.

New buildings were being erected next to another historic monument, the Shot Tower, where lead shot was manufactured by an innovative process in the 1780s. Molten lead was poured through a pierced copper plate or sieve at the top of the tower, with the droplets forming perfect spheres by surface tension during the fall; the spherical drops were then cooled in a vat of water at the base. Despite other processes also being used in later years, shot continued to be manufactured here until 2001. 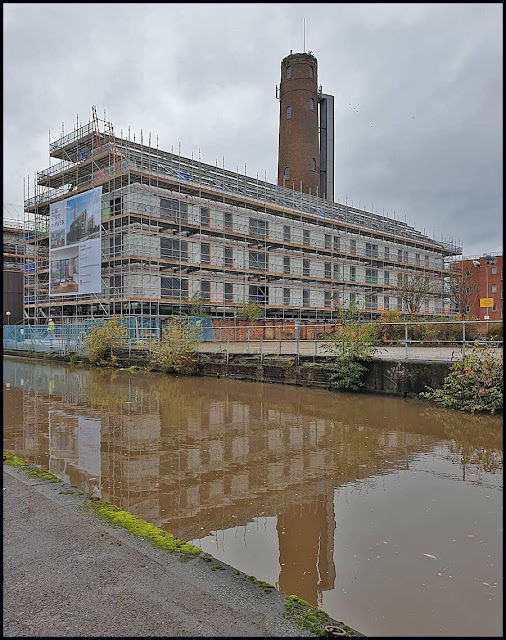 We turned into the centre of Chester, basically for coffee and cake, which was sourced at a large room in the cathedral. 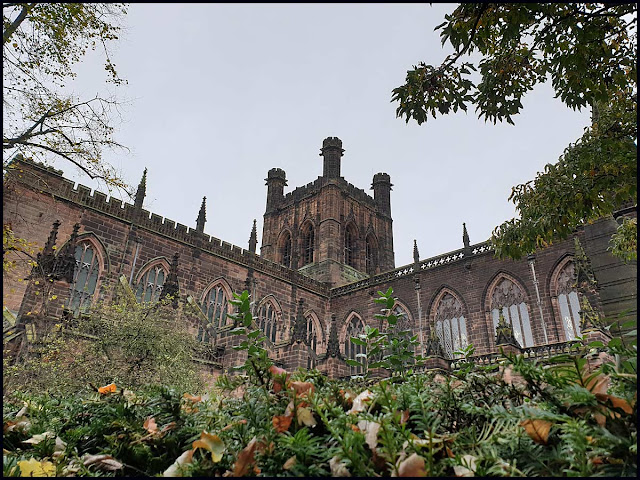 Here's a familiar view of the half-timbered buildings that feature strongly in the centre of Chester, taken from outside the cathedral. 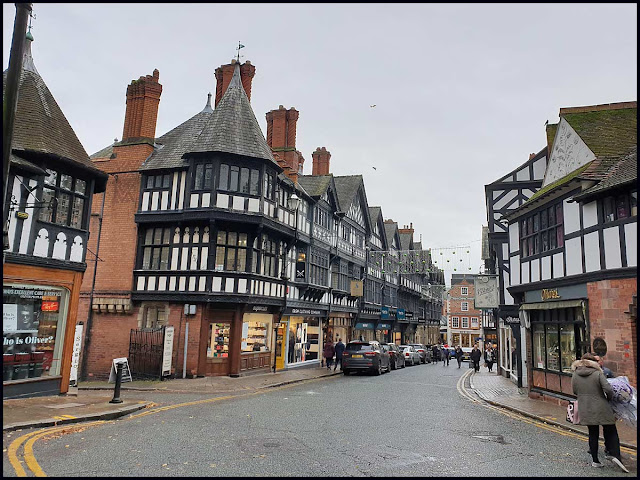 These days tourists are attracted by a large statue composed of knives, placed by the cathedral's entrance. Lots of 'Free Entry' signs lure the tourists from all parts of Chester, after which larger 'Donation £4' signs in the foyer lure the contents of their wallets. 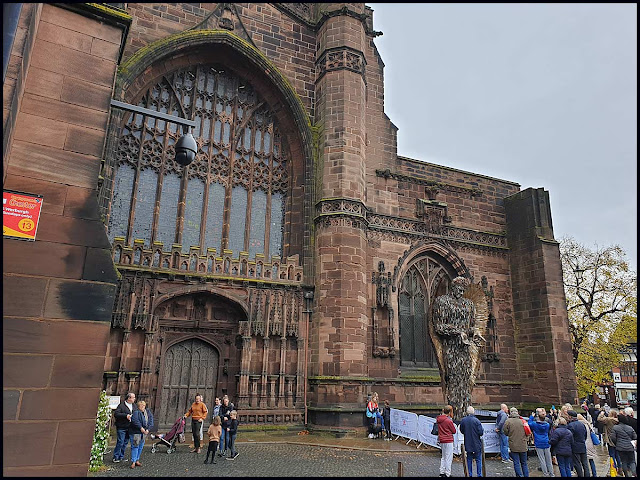 We moved north to join a 'Greenway' for most of the walk back to the car. This bike/walk route follows the course of a disused railway line and is a splendid amenity. Despite the dull day, some bright (ish) autumn colours were evident, and we passed a buzzard sitting on a post in a school playing field. Waiting for the infants to start their lunch break? 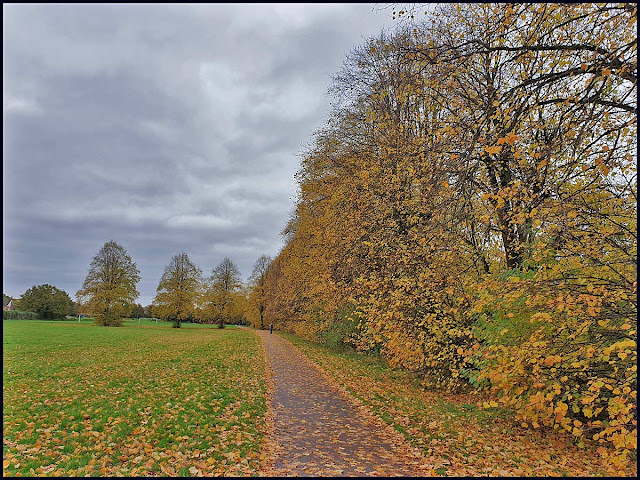 Soon after passing a large wooden woodpecker, we went underneath exit 12 of the M53 motorway, and turned down pleasant paths leading back past nice cooking smells from the Bird in Hand, to Guilden Sutton. 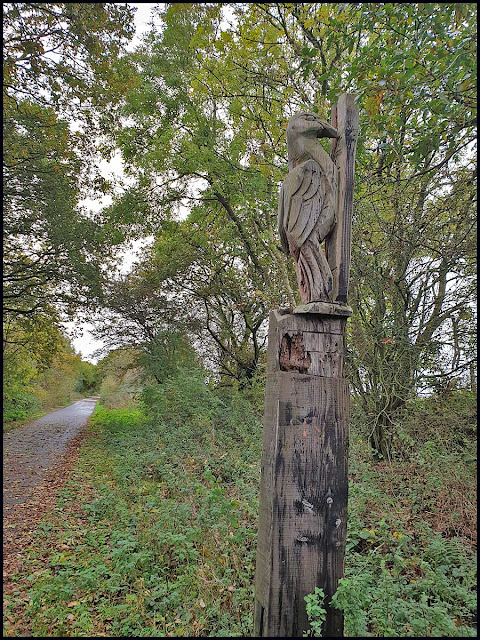 It was a pleasant 16 km stroll, with about 100 metres of ascent (ie 'flat'), taking us a little over three hours. We were back at home in time for a late lunch.
Here's the route - click on the image for a better version. 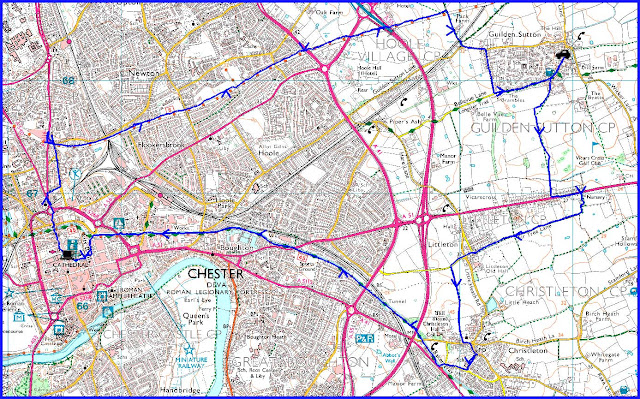 That was a good way to spend a dull (weatherwise) Friday morning, and thanks for your company, Paul.
Posted by Phreerunner at 22:22