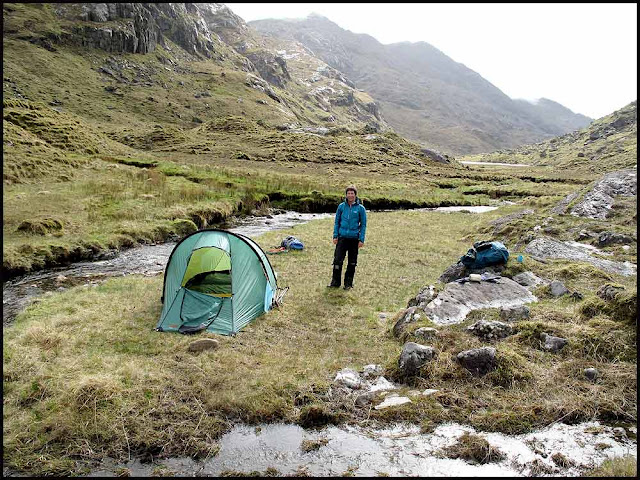 Following the sad demise of Bernie Marshall last year, I offered to help the organisers - knowing that he was supposed to be on Challenge Control at the Park Hotel in Montrose.

"We have that covered, but Bernie was a vetter, and he will be sorely missed from that role" was the gist of the response.

I can't fill Bernie's size 14s, but I did agree to vet some routes. Around 300 routes are submitted each year from TGO Challenge entrants. A team of nearly twenty people vets these routes, to ensure that they are sensible, manageable and, as far as possible, safe.

January is the busiest month for vetting, as many participants prepare their routes during the Christmas holidays, and the deadlines for submission become imminent.

I'm enjoying the vetting, but it is time consuming, so I'll have less time to compose items for this blog for a few weeks. I've therefore decided to post random pictures from the TGO Challenges that I've been taking part in since 2007.

I'm currently looking at a first timer's route that passes through Knoydart and then up beside the Finiskaig River. He plans to camp at NM891943, but I'll be able to suggest that if he cares to continue for another 1.5 km, he may find an idyllic spot at NM906947, where Sue is pictured next to our tent in 2009.

PS We did take part in Wythenshawe parkrun this morning, with Sue walking with Jeanette as both are injured. There was a huge turnout of 401 people, on a fine morning. Everything went smoothly but I took no pictures. We spent the usual hour + in the tea room afterwards. Full results, just for the record, are here.
Posted by Phreerunner at 17:16

Happy New Year to you both. Your ‘first timer’ may have to be quick off their mark to bag this spot given that you’ve given the exact location away Martin!

Haha Gibson, they've got to find this posting first! There won't be many Challengers on this route, and it's a good sized patch of grass.