I know it's a bit late to write up this trip; better late than never - here are my and Sue's recollections!
Sue Williams' rentahostel weekends were renowned for the weather. Hence, the above picture was the only one taken on Saturday 8 March. However, I can vividly recall that day, as follows:
After arriving at Clun Mill in rain on Friday night, we set off to Knighton (where the picture may have been taken), in more rain after a good breakfast. Bacon butties went down well. Fifteen of us rendezvoused in a big car park and set off walking at about 10am. This big group comprised:
Me and Sue
Martin B ('Mad')
Andrew J
Phil and Sue
Keith and Matthew (this was Keith's 40th birthday weekend - there was lots of booze)
David A, GS, Mike C and Robin
Anne D
We ambled along through typical Welsh border countryside. It wasn't particularly pleasant, on account of a surfeit of rain and mud. Moreover, some of the footpaths marked on the map were conspicuous by their absence. Welsh border farmers are not renowned for their affinity to walkers.
After Matthew had practiced his breaststroke on the descent to Heyope, we found a stream (not difficult) to wash off the main part of the mud bath from our clothes. So we were relatively clean by the time we reached the pub at Llanfair Waterdine. This is just past the 'Everest Hall' - this village is where Lord Hunt, of Everest fame, had his Baronial fiefdom.
There was nobody else in the pub, where the beer was cheap, £20 for a round for all fifteen of us. The only food available was Ploughman's Lunches - we all had butties, but no offer was made to allow us to eat them inside. Instead, the landlord told us we should have booked ("like parties last week and next week") and he would have got a full menu on..., he had a bit of a problem trying to convey that to our leader, as we didn't seem to have one - lots of people had maps, most of them better than my 1st series 1:50000, so I didn't do much map reading today despite being a contributor to the 'plan'.
Back outside in the pouring rain a few of us tried to eat our butties on the hoof, but the others shot off ahead. The laggards, me, Sue, David and Julie, went up by Black Hall and on to the Offa's Dyke path, where it was no less muddy than elsewhere. I even saw a bird of prey, perhaps a sparrowhawk, flying about a foot above the ground in the wind and rain.
It transpired that the others had taken a longer route, and we saw them behind us on the muddy ascent of Cwm-sanaham Hill. Unable to find a sheltered spot on the ascent, we eventually sought slight respite beside some gorse bushes - more tea and cake. Here the others joined us. They were wet. Mike C, as usual in wet conditions, had been moaning.
With the wind coming strongly from the west, we were now a little more sheltered on the long descent to Knighton. The Offa's Dyke route took us down the west side of Kinsley Wood, past lots of chaffinches in the budless hedges, along the River Teme, and into the town.
I had sped down the hill and found Mad (Martin B) sloshing around the town in his sodden clothes. Lots of curious little shops. Luckily I had remained dry! (New overtrousers helped, and my Trazeta summer boots worked fine.)
So, back to base for a jolly evening with Julie's soup, pate and melon, followed by home-made chicken curry, lamb casserole, and fennel and lentil au gratin - all prepared by Sue and me on Thursday evening, as was the apple crumble that followed, with a fruit salad accompaniment. Beer, a firkin sponsored by Keith, washed everything down very effectively.
Sunday 9 March
Wow, it dawned dry!
After a breakfast of fruit salad and sausages, and some packing up, we left the hostel at around 10.30 under the flapping wings and the mewing of a buzzard. It was still windy, but with sunny spells, it was much better than Saturday.
A gentle climb, on fields, road and track, past ponds, led to Bury Ditches fort, and a traverse around the hill on a narrow path to attain the top of Sunnyhill.
The following pictures were taken en route to the summit. 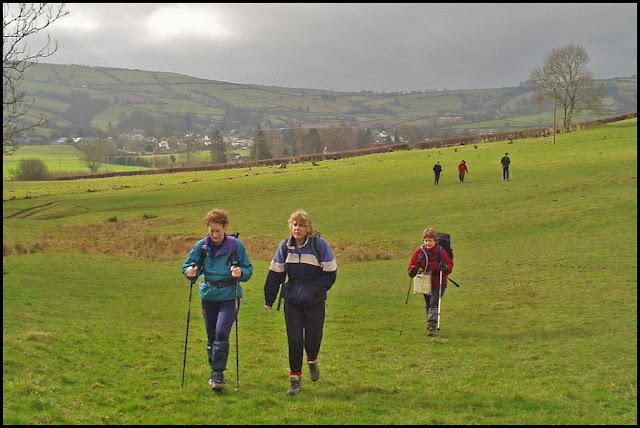 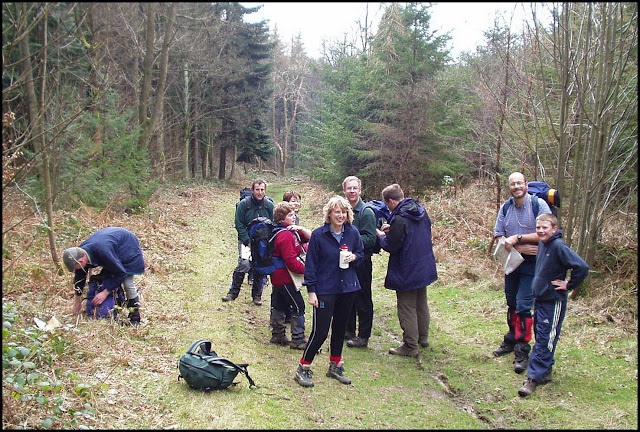 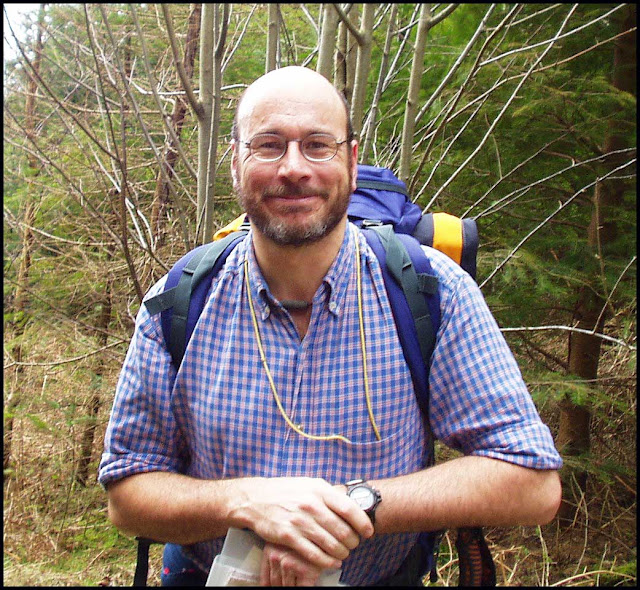 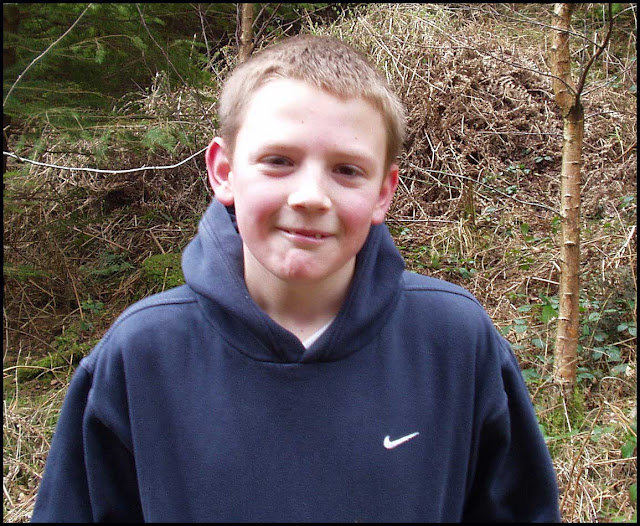 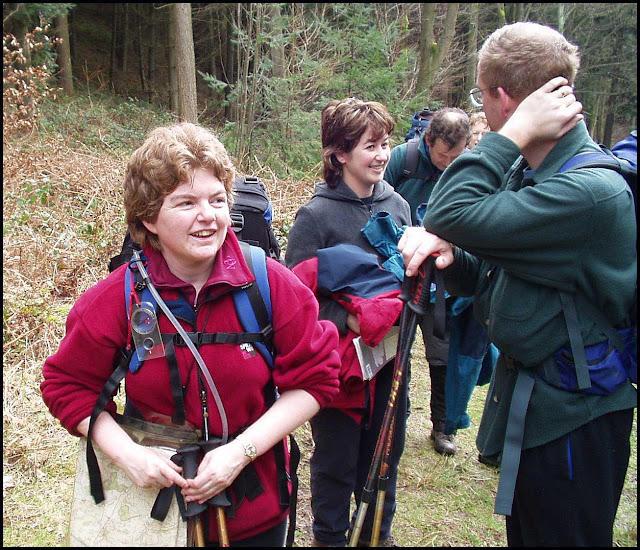 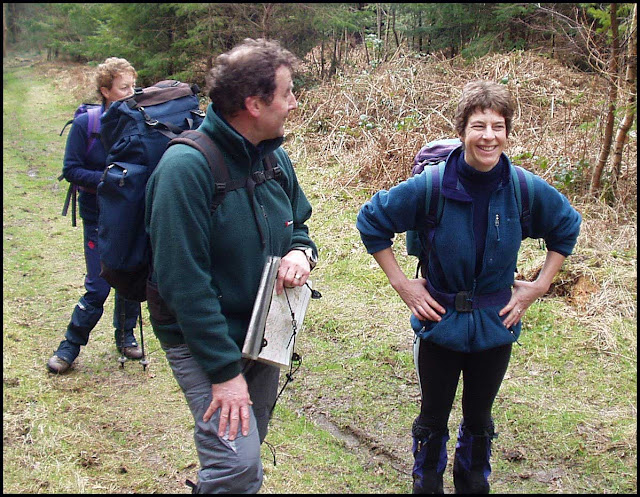 It was very windy on the summit. Trees had been removed and the ditches were four feet deep. All round views were excellent. Sue W missed them as she'd had to return to Clun due to a 'bad knee'. 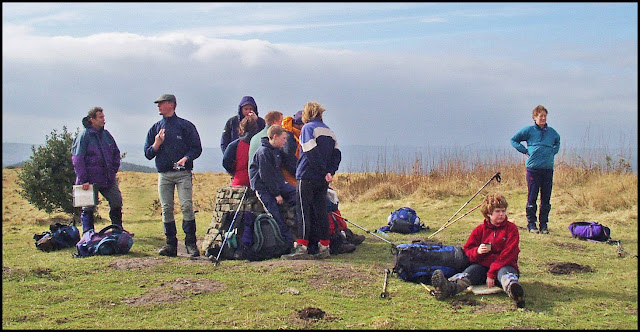 A good track led onwards, and the party split, with Phil, Anne, Tara and Mike W returning to Clun, and GI, Carol, Matthew, David, Julie and others continuing to the Hundred Inn at Purslow.
A lovely track led past ancient oaks with low spreading branches, then the lack of public access along a short section of track enforced a lengthy detour, then a road trot to the Inn.
The hedges were just beginning to sprout, and lots of chaffinches flew out as we passed. We met up with Keith and Zoe in the Inn, before continuing. It was chilly, but we found a pleasant spot for a sandwich, next to a stream with mallards, and beside long-tailed tit laden trees that triggered a bit of 'mountaineering'. 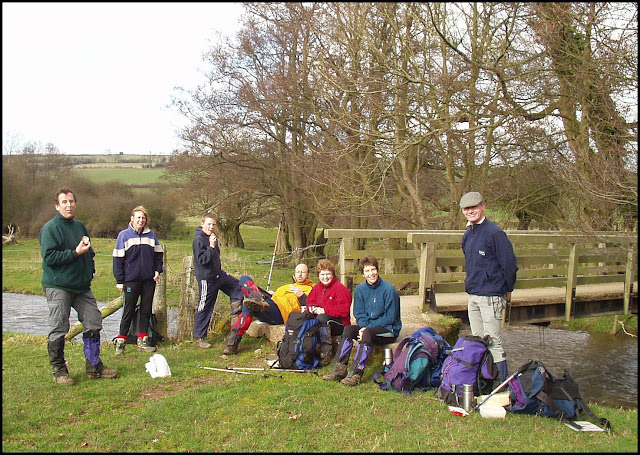 It was a nice return route to the hostel - we climbed again, into woods where we reached a TV tower, then we followed tracks and finally the road, to return to Clun. Unfortunately it drizzled for the last half hour or so, washing out the colour we'd had during the morning sunshine.
Around 4.30 pm, after an 11 mile stroll, we set off home, via Shrewsbury, where we visited my Uncle Peter in hospital for the last time.