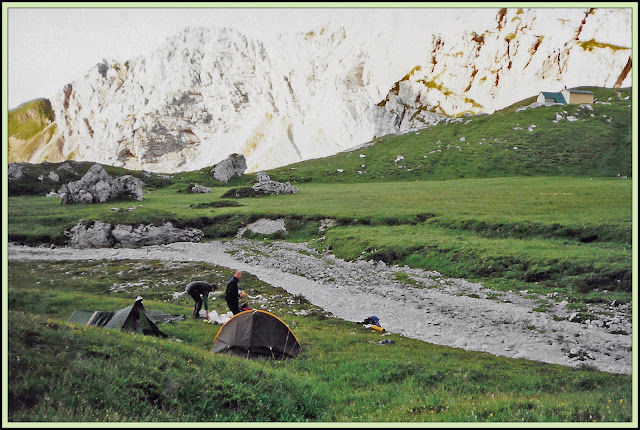 After going to sleep at about 10:30 pm to the sound of gentle rain, I woke for a pee in the night to find bright moonlight, as in the previous night. The lovely flat meadow gives a good night's sleep after removal of partially dry socks. These are reapplied at 6:15 am to at least warm them before entry into my somewhat soggy but now well worn in Berghaus shoes. These performed well yesterday - trainers would have meant retreat.

We half expect to hear Laurie slithering down the scree after a difficult bivouac, but nothing heard or seen. Sense must have prevailed. Our 4:30 pm departure from Mattiuzzi was about as close as anyone would wish to cur it.

Another delicious tea brew is followed by muesli made in Droylesden but bought in San Martino.

We are looking forward to a good, if airy, final full day's walk of the holiday. It's a pity that Laurie and Martin W couldn't be with us.

Set off a bit later than our 7:30 plan. Up to the refuge (Bivacco Feltre Bodo) which is deserted, last night's occupants having left very early. A very tidy refuge. Dave washed his shirt, and water was replenished before we set off on path 801 in accordance with the Martin Collins Alta Via guidebook's instructions.

Awkward ground was followed by a short steep climb where we waited for Dave before commencing the Sentiero dei Caserin, where the ground became more difficult, with one fixed rope. Lots of flowers and an adder. 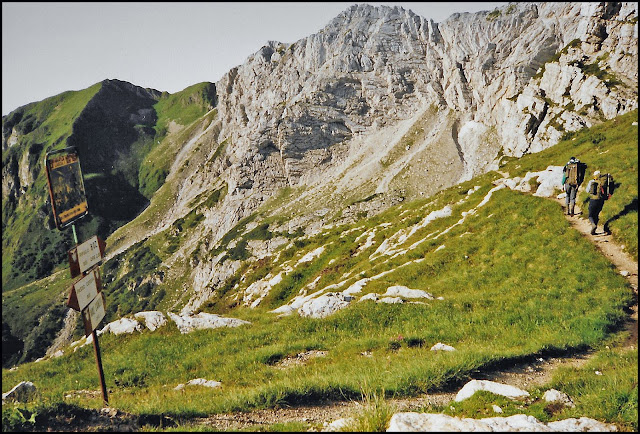 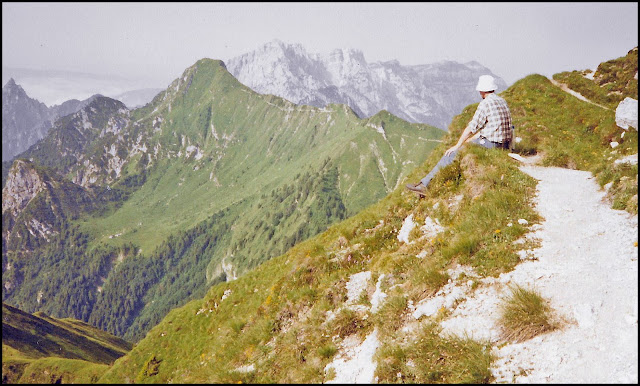 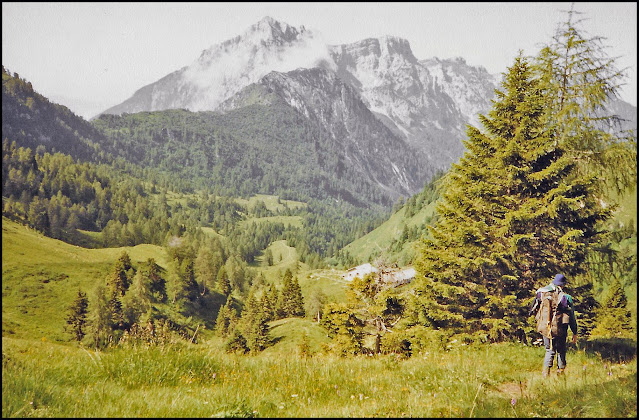 On by a sort of short cut to Rifugio Bruno Boz (1718 metres). A second breakfast was accompanied by a welcome lemon soda and a cappuccino. The hut keeper was busy restocking with the aid of his goods lift, whilst his wife sunbathed. 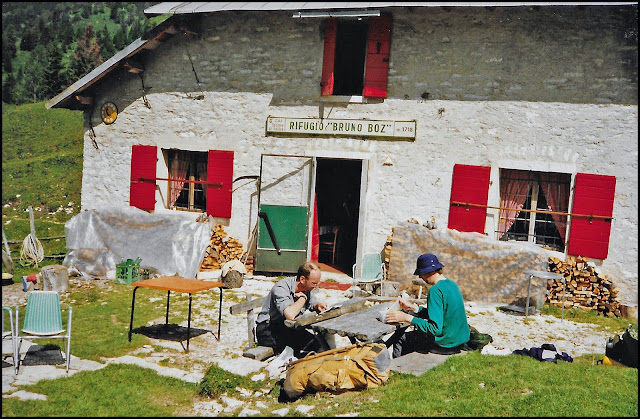 By 11:20 we were on our way again, on the last high stretch of the walk. Also the longest - 5 to 6 hours according to the guidebook, excluding stops.

The path climbed through vegetation to an electricity pylon, and thence up and up and up on giddying airy tracks, still with some vegetation which was a nuisance.

Great care was needed. We reached the top of the ridge to find a narrow path made up on it with massive drops either side. Even though it wasn't windy, at least one of us crawled. I couldn't see the others. Footsteps cut into the rock made the next bit easyish in comparison with some paths, but the path then continue to wind up to dizzy heights with drops to oblivion on the left side (usually), but also sometimes on the right side as the path zigzagged up to near the summit of Sasso Scarnia (2226 metres). A piece of metal rope was needed to achieve that objective. 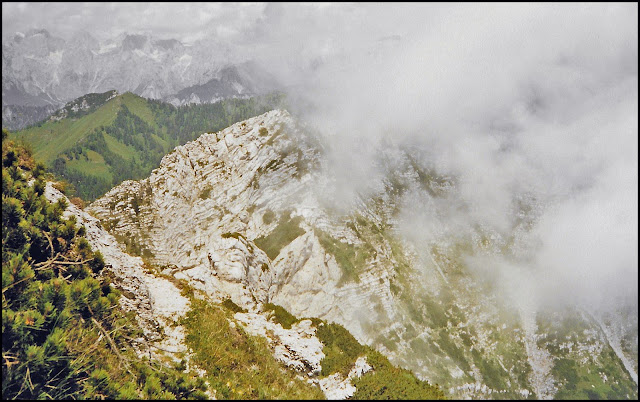 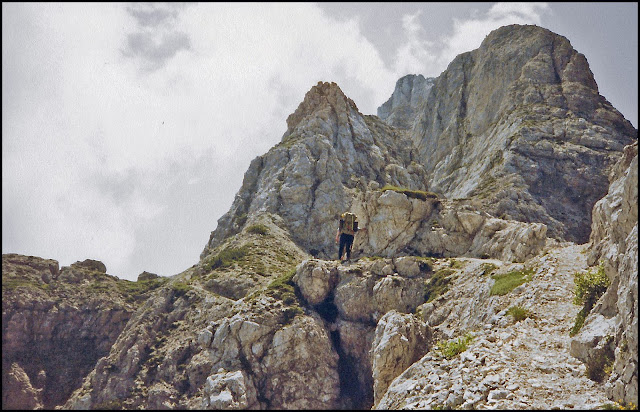 Cloud was about; although we had been walking in bright sunshine with large dollops of sun tan cream. We seemed to be above a layer of cloud, and had our now familiar views of surrounding peaks isolated from the main bodies of the mountains by cloud.

We suddenly found ourselves amongst big boulders with no view of the drops. 2:05 and lunchtime. Final tins and bread, etc. A pleasant stop in a secure place - obviously well used as there is a resident refuse tip. 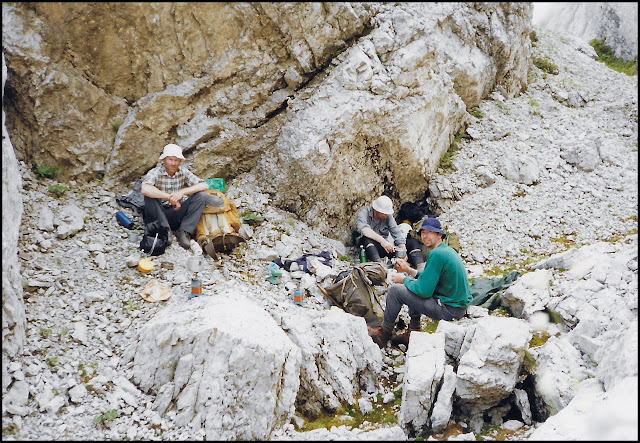 Soon we are back on our way and have an interesting section below an overhang on sloping slabs. Continue on the south side of the mountain for some time. Extreme care and concentration still needed, but the ground is a bit easier than before lunch, when at one point a 'move' (or in my case a 'jump' was needed on a section which ought to have been aided but wasn't.

Two hikers, the first people seen all day (except at Boz) were met near here. Another path joined from the left and from now on the going was much less giddyfying. I was able to keep up again, and now it was Dave who got left behind. Up to this point my unease on exposed sections had led me to be last most of the way. We missed a sign to a massive cave, but hadn't time to visit it anyway. Yesterday's problem with the weather looked likely to recur. It duly started raining after we had completed another fairly flat section and were on the well made mule track.

Usual off / on antics with waterproofs when just at the far edge of a storm.

Now into typical upland limestone scenery as can be found in the Yorkshire Dales, we made good time over easy ground as far as Rifugio Giorgio Dal Piaz (1990 metres). We had missed an alleged spring in the previous valley and had no water. The Rifugio was in the middle of serving an evening meal (6:30 pm) and did not seem very welcoming. No outside tap or obvious places to camp, so we headed on down past a sign which said 6 to 8 hours to Boz. It had taken us 7 hours the other way. 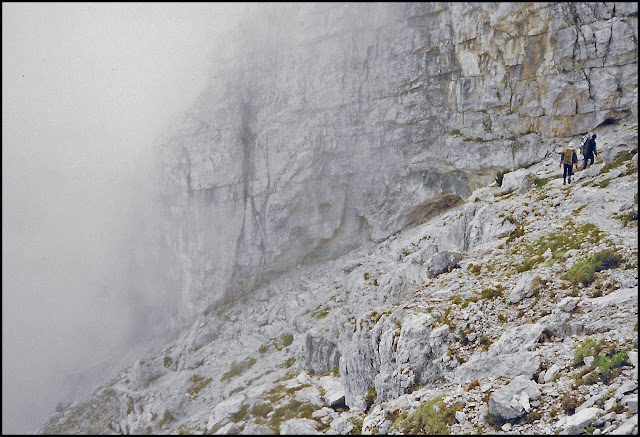 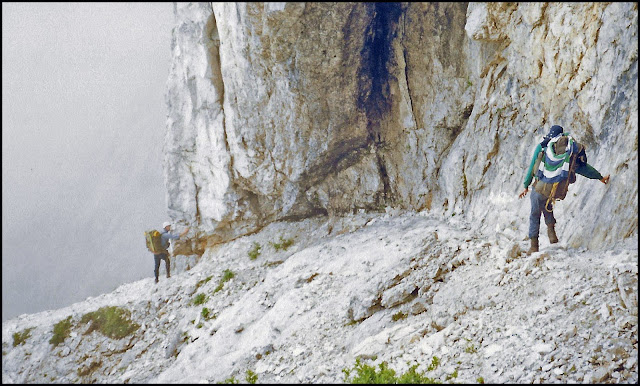 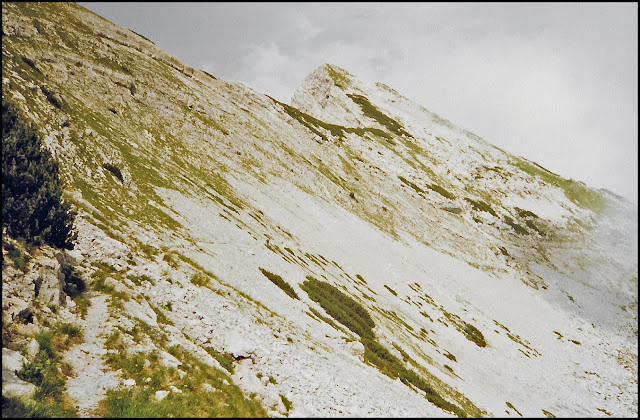 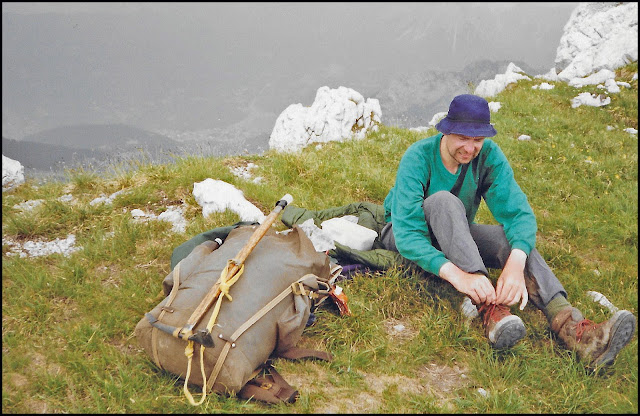 The descent started on a spectacular old military road which switchbacked down the steep hillside. 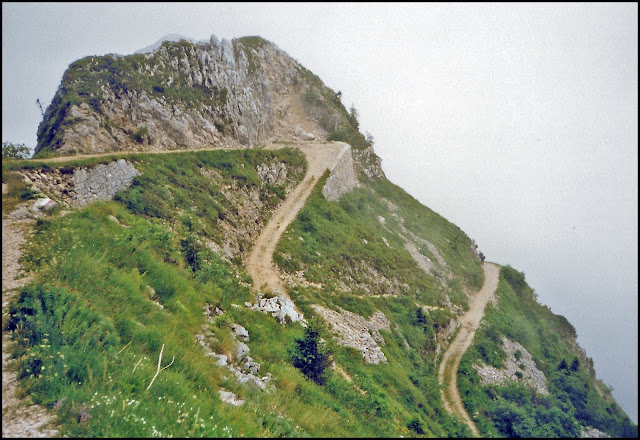 It started to rain. The others took a shortcut and got ahead. I did the same. The rain got heavier and we took a rough path down towards Croce D'Aune in increasing gloom. Under the trees it was very dark and misty, and muddy rivulets took over the path.

We were quite tired and stopped briefly (mainly for me to finish my chocolate). The rain lessened and we reached Croce D'Aune (1015 metres) by 8:30. Failed, despite efforts, to find a hotel. Continued on down the road towards Feltre. Dave admits to getting a perverted pleasure from this lengthened day, in particular the rain.

We go past a Nature Reserve and find a couple of ruined buildings. There is flat ground behind the firmer of the two, and a bench. It is quite warm and has stopped raining. This is the spot! Brew, cook tea, and have the tents up - in that order to be discreet, by 10 pm. The end of a long day. Much cursing from John who has lost a peg and appears to be pulling unexpectedly wet items one by one from his sack.

The 'Laggards' Tale will follow in due course.
Posted by Phreerunner at 14:07

we stayed at Rifugio Bruno Boz, the supply lift you mention brought the Guardian's aged mother up from the valley. After a convivial meal with much grappa she was sent off down again! Oh happy days.

PS. The 'lift' was basically a fruit box.

Good memories, aren't they. We never managed to get our bodies into a goods lift, so far as I can recall, but they certainly provided a welcome portage for our heavy rucksacks on more than one occasion!