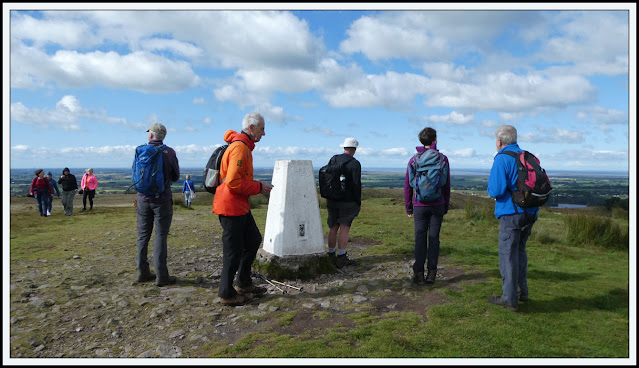 It's a while since we went up Nicky Nook. This destination is the wrong side of town for most of us. However, traffic is light these days, so with no hold ups it took just an hour to reach this lovely area. We were blessed with fine weather and superb visibility on this visit, for a walk that was a minor extension of one that we did in the evening on 24 May 2005 and on other occasions.

The 'full house' (there's a maximum of groups of six people at present) included regular Friday morning walkers - Sue, Graeme, Paul and me - and we were delighted to welcome Tony, who we hadn't seen for several years, and John (aka 'BC'), who we met for the first time today. John is a blogger in the name of 'Bowland Climber', and occasionally comments on these pages - comments that led to his being invited to join us today on what is his 'home patch'. It was a pleasure to meet you, John.

Somewhat miraculously, everyone had found the picnic site and we were ready to roll before the designated time of 10 am. We strolled past a bus stop that on a rainy day could challenge the concept of social distancing. 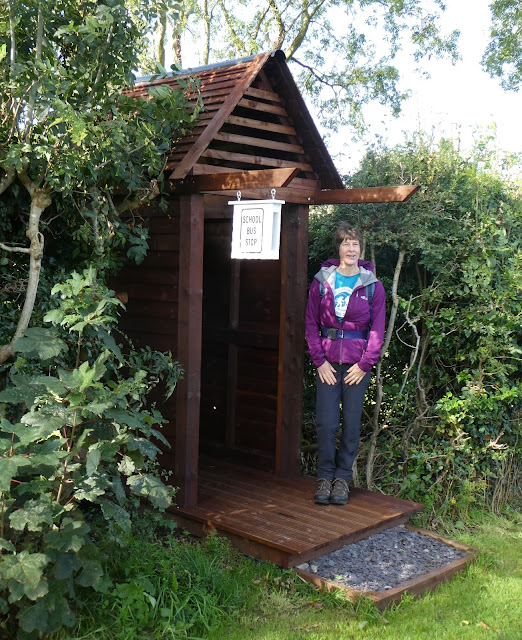 Quiet lanes led to Cliftons, and a typical Lancashire farmhouse. Can you spot the sheep enjoying its breakfast in the garden? (Click on any image for a better version.) 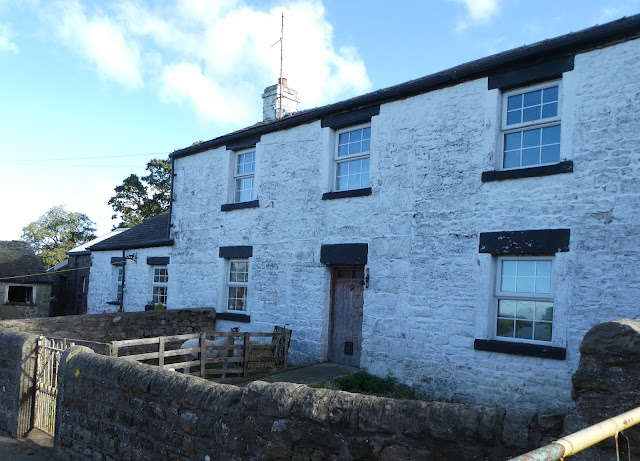 Pleasant field paths led us towards the Bowland fells, with fine views towards the Lake District as we slowly rose in height. 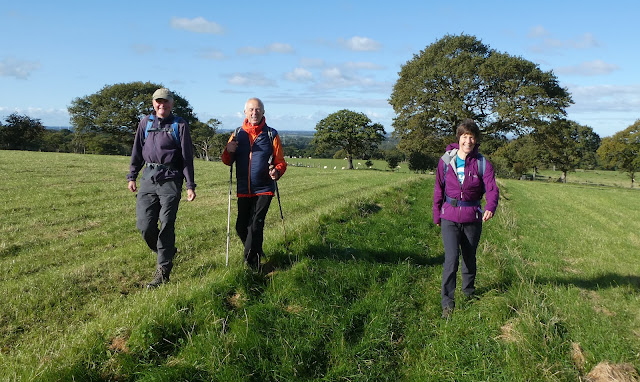 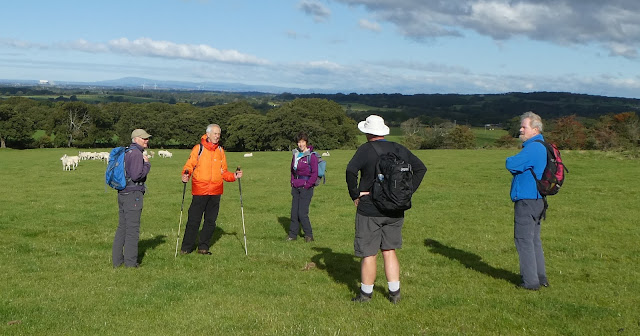 Paul demonstrated to Graeme 'how to balance a sheep on the back of your hand'! 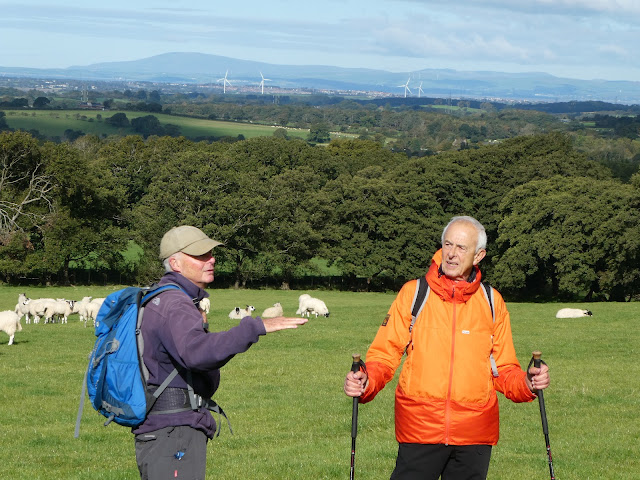 After passing Sykes Farm, we rose gently to the Dolphinholme road, turning right to gain a good view towards Nicky Nook.

A fair path leads down to Fell End, whence tracks saw us to the edge of Holme Wood and an elevenses bench, by way of a memorial to Keith Thomas Witherington, who I imagine liked this place. Social distancing restricted use of the bench to just two people. 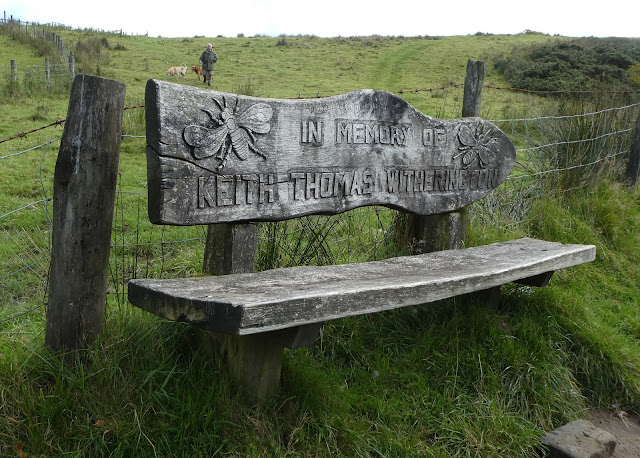 It was busy near that bench, as the conclusion of a partridge/duck shoot was assembled nearby. I thought I saw quite a few pheasants as well. We were pleased to have missed the carnage.
Continuing onwards, there were good views back down the hill. 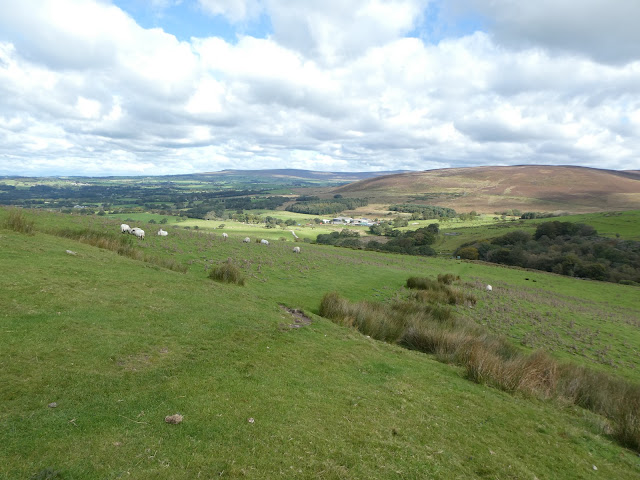 Before reaching the summit of Nicky Nook, we passed a stone pillar and noted another one in the distance. Both are visible in the next picture. They apparently mark the course of the aqueduct carrying water from Thirlmere to Manchester. I wonder how deep the aqueduct is buried/tunneled?

To the east, the summits of the Forest of Bowland fells beckoned, but not for us today. 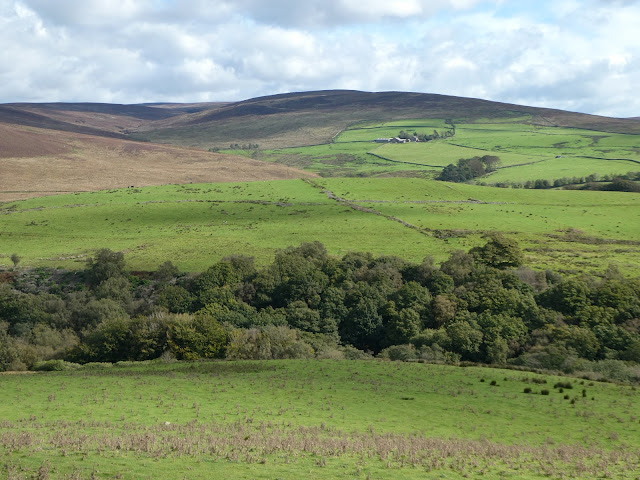 We lingered at the 215 metre summit of Nicky Nook, despite a cool breeze. There were views to the Lake District and to the hills of North Wales, as far as the Great Orme. A brilliantly clear day, on which Blackpool Tower, some 15 miles away, looked very close by. 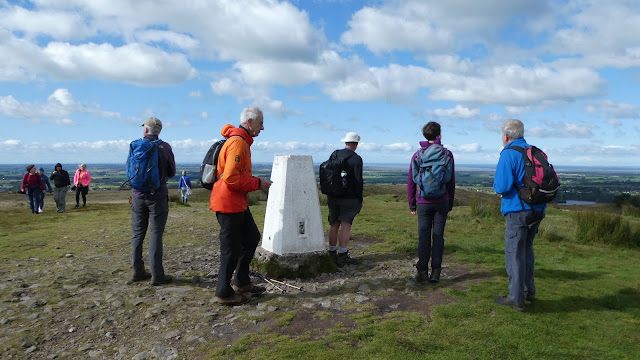 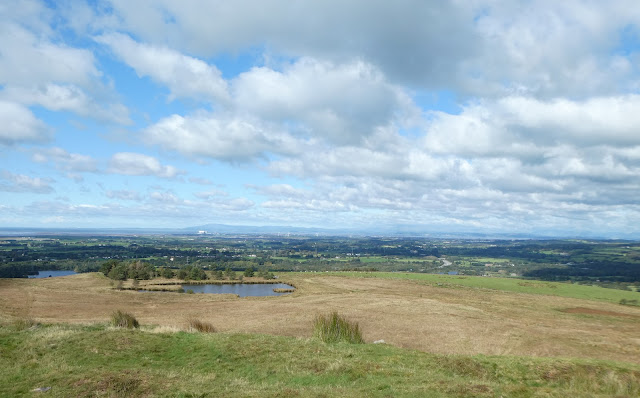 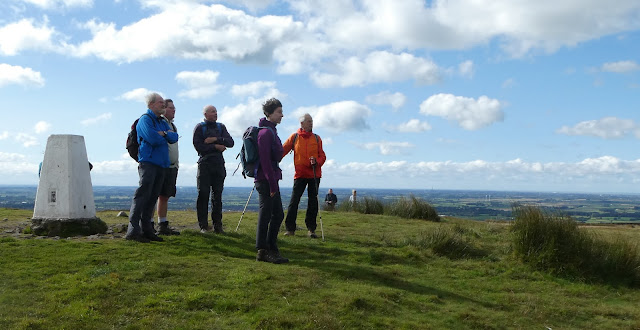 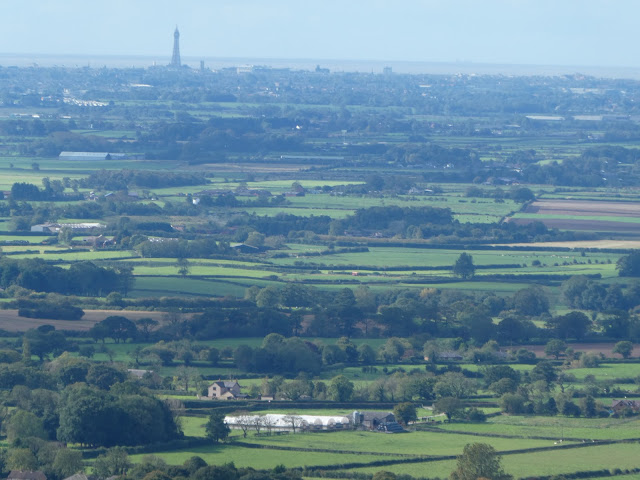 A descent past the second stone pillar led us to the delights of Grize Dale, a very pretty valley. 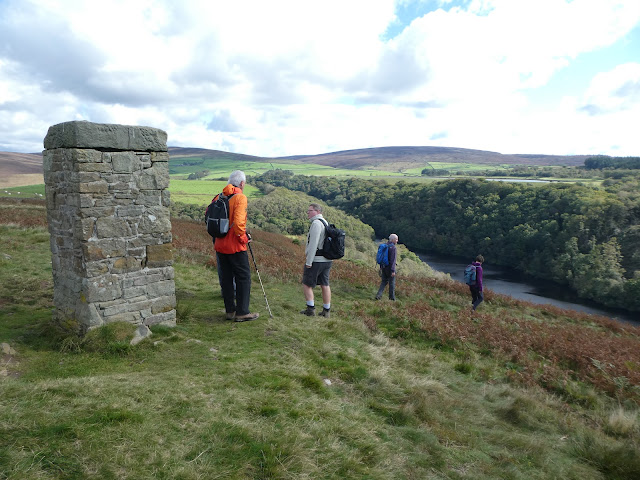 Bird life ranged from tree creepers to buzzards. John told us this was a favourite spot for bird watchers, though today we were probably too engrossed in conversation to benefit from any exciting observations. 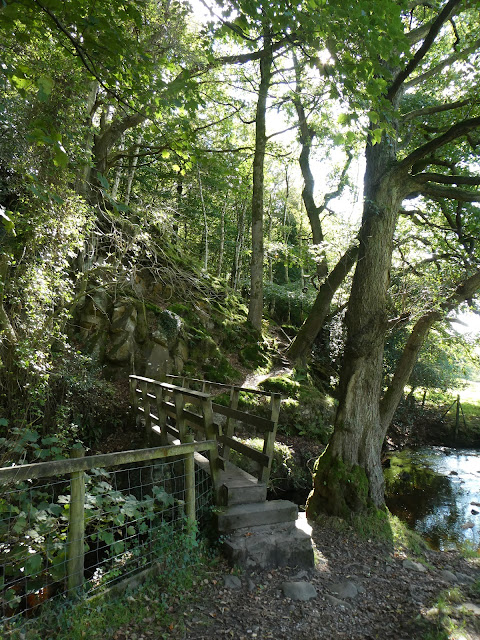 Tony thinks Grize (as in Grize Dale) probably means a valley where wild boar were to be found. There were none on view today! 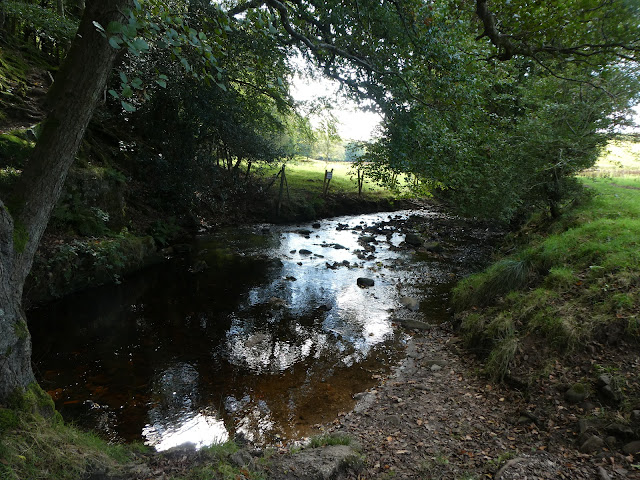 Lunch was enjoyed at the western end of the dale by a bench in memory of Vicki-Lynn (1990 to 2004). The inscription reads 'Rest a While and Think of Vicki, Drinking Coke and Looking Pretty'. John thinks this young girl was a victim of leukemia. Very sad, but a lovely memorial. 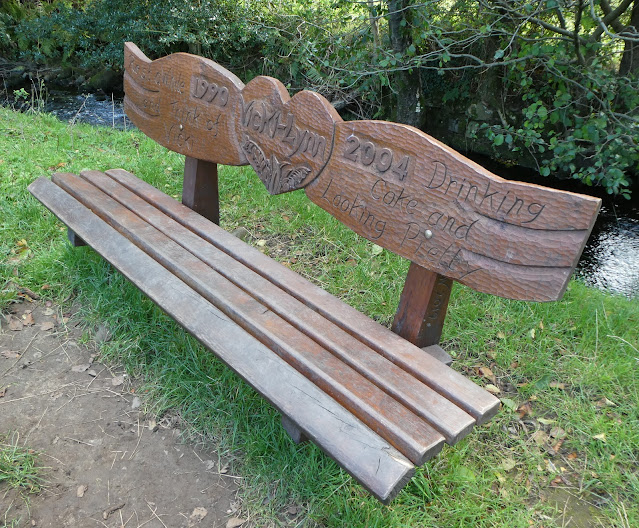 A path around Throstle Nest Farm brought us to an innocuous looking stile. BC wisely demanded that I put my camera away before he attempted it. We were glad that neither Conrad nor Andrew was with us at this point! 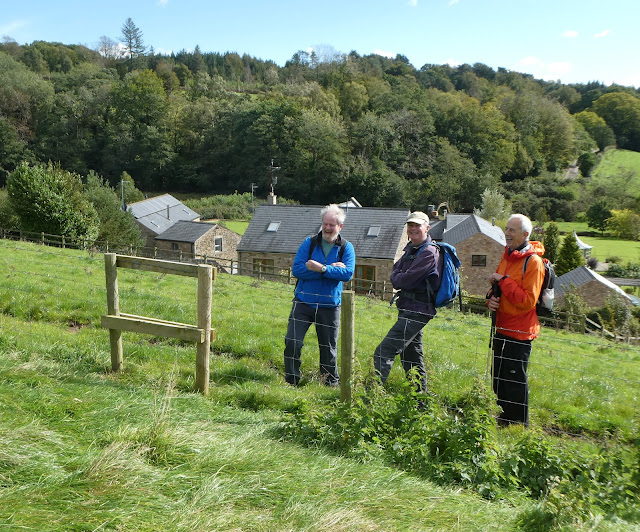 I now see that my intended route was to follow the tarmac lane a bit further and take the path past Long Crossey Wood, joining the Wyre Way route for the rest of the walk. We effectively took a short cut - the intended route would have been better.
Scorton church is a landmark with which all motorists taking the M6 south of Lancaster should be familiar. 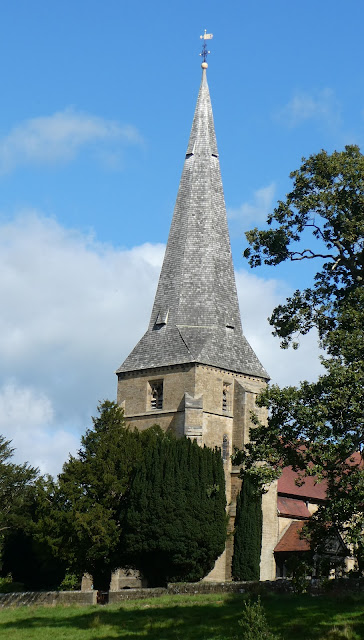 Scorton means ‘farmstead near a ditch or ravine’. The village was developed around the cotton mill and railway in the nineteenth century, although there are records of the village and catholic church in Scurton, or Scorton, tracing back to the 17th Century. We could have paused for refreshments in this pleasant place, but having already lunched, and being aware of current pandemic issues, we continued amiably on a lovely path beside Scorton Lake, the site of a former quarry.
On reaching the minor road at Ashbournes, we received a stern warning as to the location of our destination. If it was intended for motorists, Lancashire County Council clearly has a very high regard for the reaction times of its drivers! 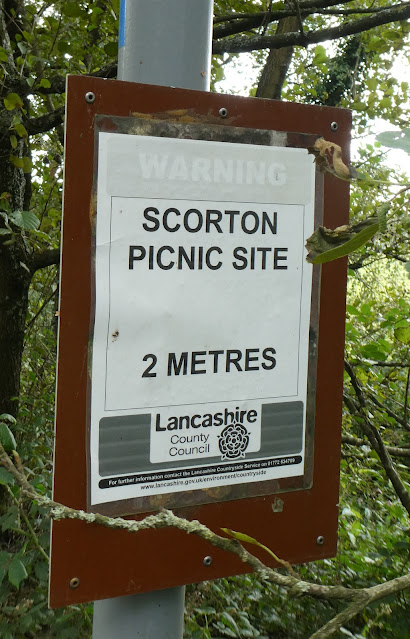 Here's our route - about 14 km, with 300 metres ascent, taking us a leisurely four+ hours. 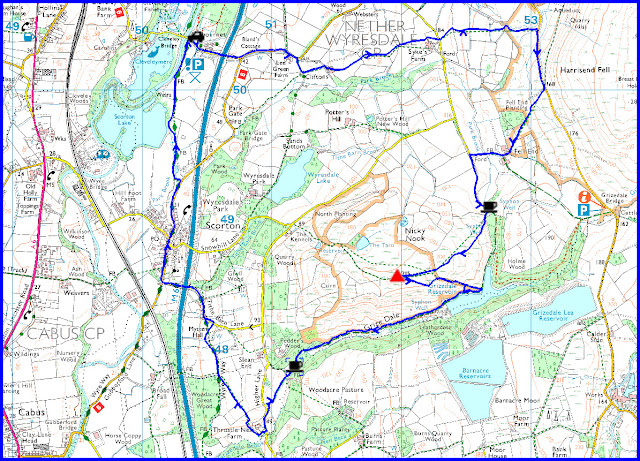 What a lovely way to spend a morning.