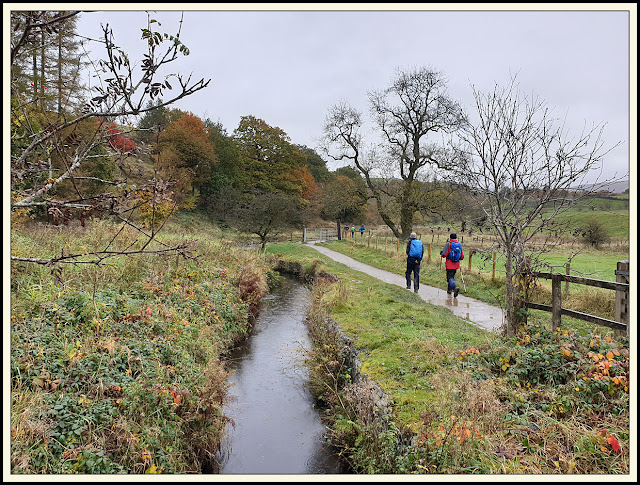 Six of us, me, Sue, Cary, Dave, Graeme and Paul, met on a rainy morning at the Visitor Centre at Hollingworth Lake, near Littleborough. In normal times the journey on a busy section of the M62 motorway might discourage us from this venue, but these days the traffic is light - even during rush hour. Moreover, today was the first day of a high risk Lockdown, during which working from home is recommended, and staying within your own area is advised. This 'Tier 3' Lockdown applies to Greater Manchester, and despite being a 45 minute drive away, our destination remained within those bounds.
We set off along the 'Rochdale Way' path, beside a conduit that allows water from Hollingworth Lake to run into the Rochdale Canal. The 'lake' is a reservoir constructed in the late eighteenth century for this very purpose.
Soon we reached the canal, which rises quite steeply at this point through a series of locks. 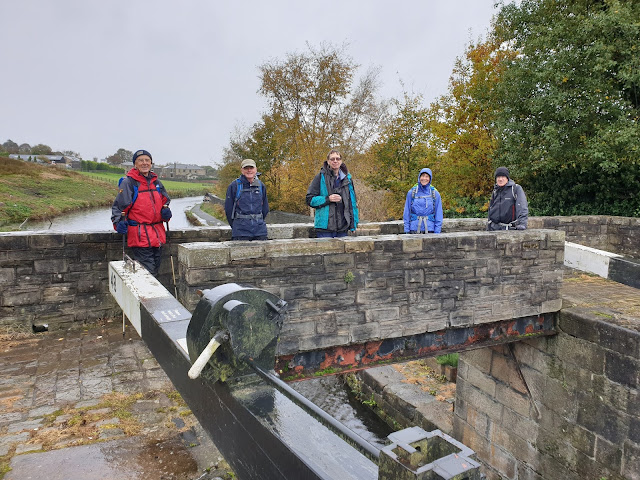 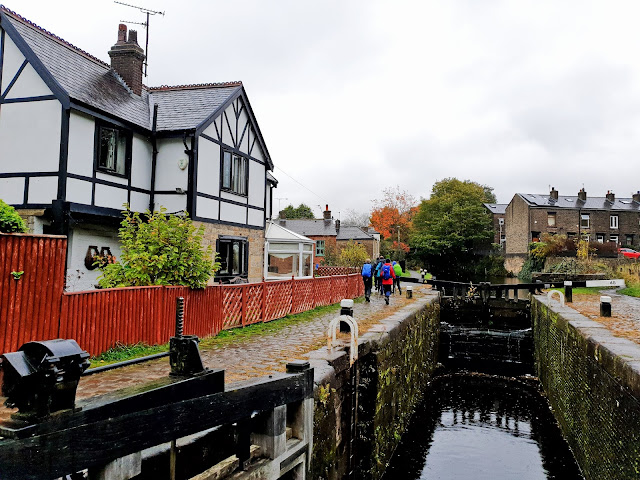 Bridge number 49, with its resident gaggle of mallard ducks, was soon reached. 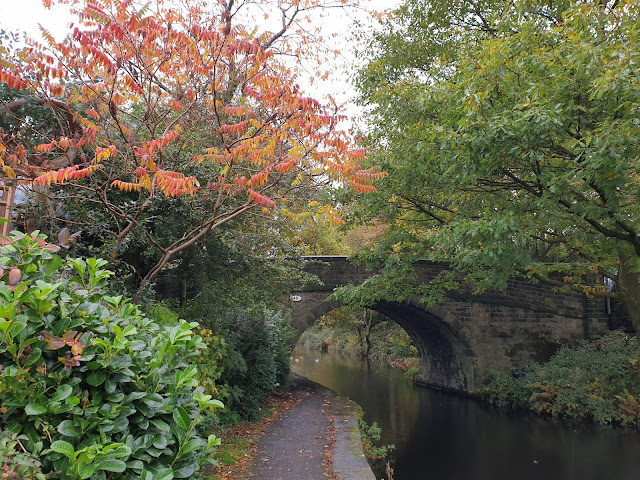 We continued for quite some way along the towpath, surrounded by vibrant autumn colours despite the light rain that came and went during the course of the morning. 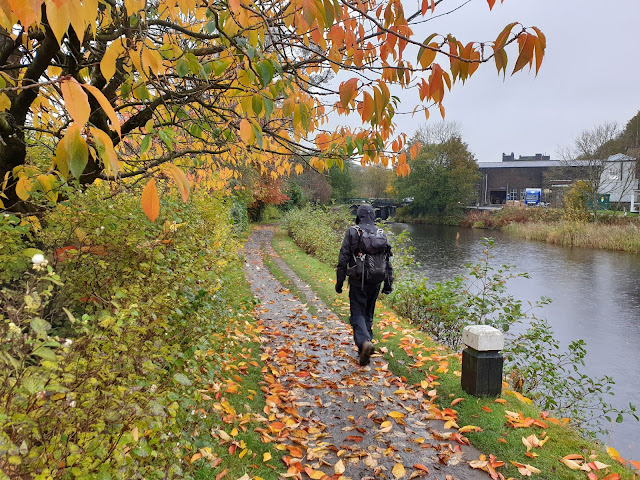 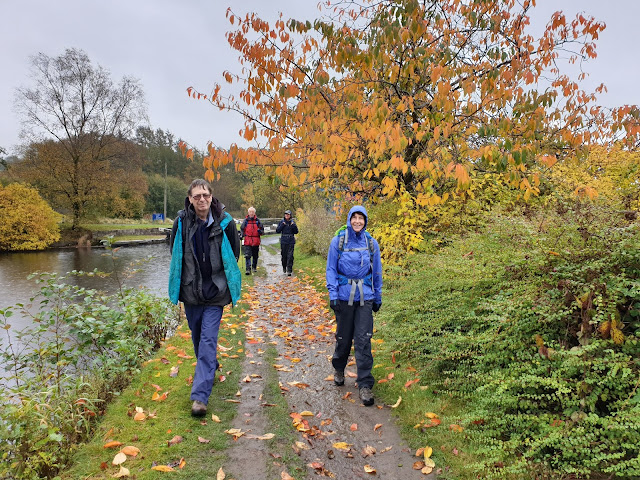 Elevenses were taken before we left the towpath and headed up past Summit Quarry, a locally important gritstone quarry where climbing now takes place on a number of routes. We joined the Pennine Bridleway footpath here, and followed the well signposted route nearly all the way back to Hollingworth Lake, which itself was well signposted. 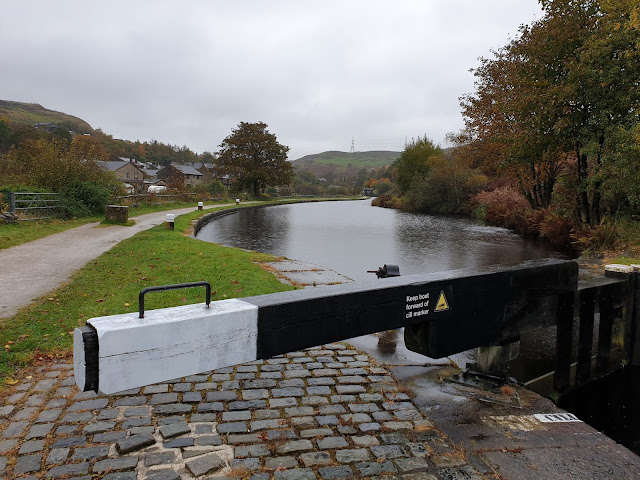 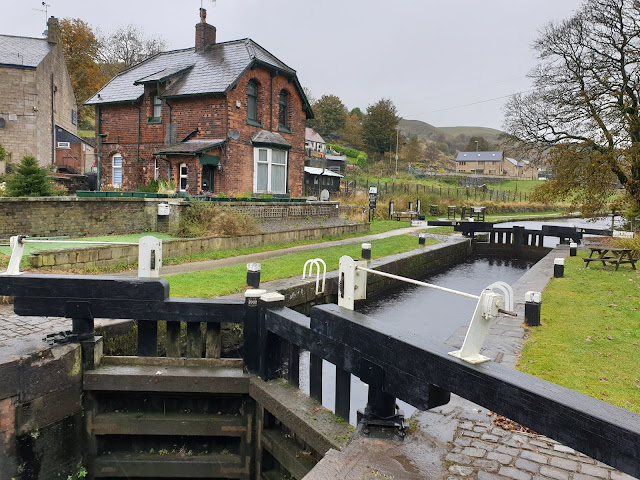 A farm was passed. Despite accusations from some members of the party that the animals were ostriches, it did seem a bit far fetched to regard them even as 'baby ostriches'. My research after getting home leads me to think they are rhea. I hope they feel at home here, far away from their native South America. 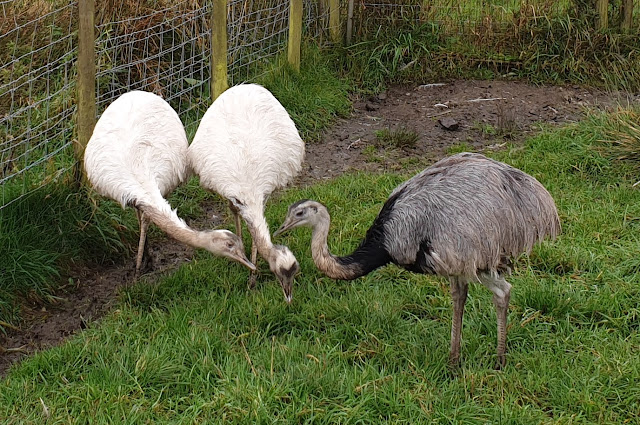 After a pleasant walk along the Pennine Bridleway, during which we observed hunting kestrels and met a handful of people in this popular walking area, we dropped down to the road by Hollingworth Lake, beside which we enjoyed our lunches. (Smoked salmon and cream cheese; thank you Sue.)
We continued in a clockwise direction around the lake, which was less than photogenic today. There was a lone boat bobbing about in the middle, otherwise none of the usual frenetic activity. The lake is very close to Smithy Bridge, and access to a railway linking Lancashire and Yorkshire, so it has been a popular tourist attraction for sailing, walking and picnicking for well over 100 years. 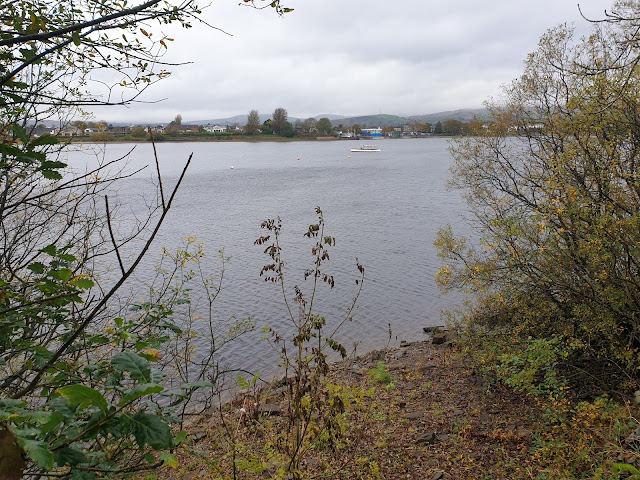 In fact, this has triggered memories from 60 years ago from Conrad, a regular correspondent here, who comments thus:
'Memories for me and my younger brother who is sadly no longer with us racing our Merlin Rocket dinghy at Hollingworth Lake Sailing Club back in the early 60s.' 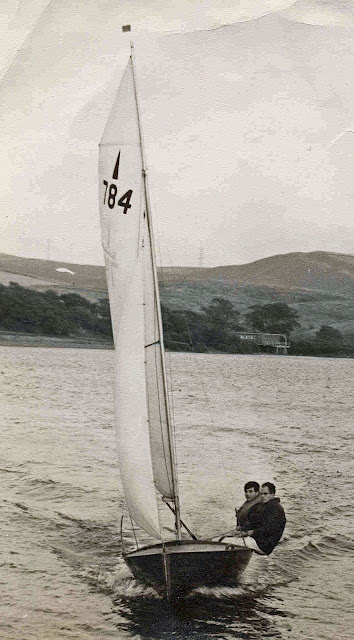 Thanks Conrad.
Back at the car park, we were all glad to have paid the £3 fee, as a team of wardens was assiduously checking all vehicles for tickets (as they had been when we arrived four hours earlier).
The trees here are in a rather more advanced state of 'autumn distress' than those at home in Timperley, just a few miles to the south, and rather lower in altitude. 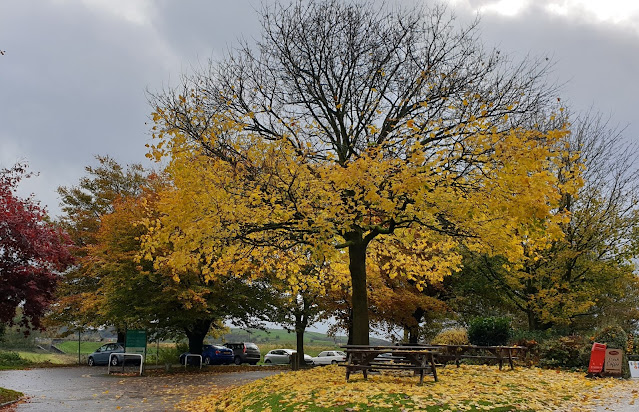 Here's the excellent, and very easy to follow, route. It's just 15 km (9 miles) and includes about 300 metres of ascent. It took us a leisurely four hours or so. Other routes are available. 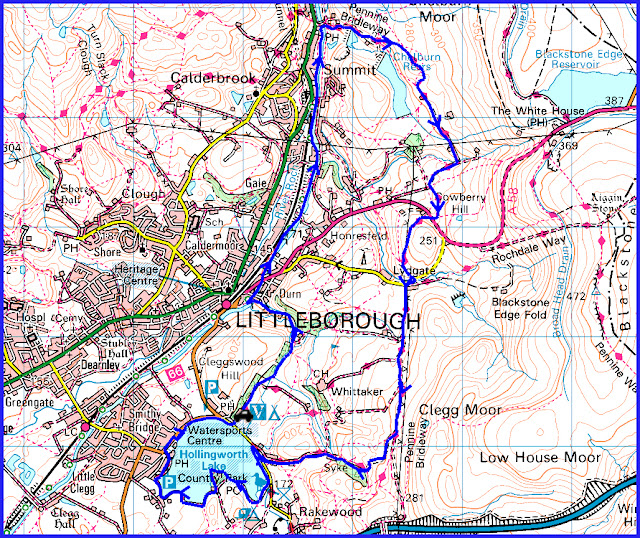 Thank you for your company and cake, everyone, this was another lovely outing.
Next week, 30 October:
Kingsley (near Frodsham). Meet at 10 am at the Community Centre in Kingsley (SJ 550 748) for a 10 km circuit to the Frodsham cut and back.
Posted by Phreerunner at 20:45

Thanks Conrad. Happy Days! I've inserted your comment and picture into the main narrative if that's ok.

Thanks Maureen. Comments like yours and Graeme's make the effort worthwhile.

We was hoping to join you on this walk, being in our neck of the woods. But it wasn't to be. Hopefully we can get to join you before too long.

We hope so too, Alan.
Take care
M