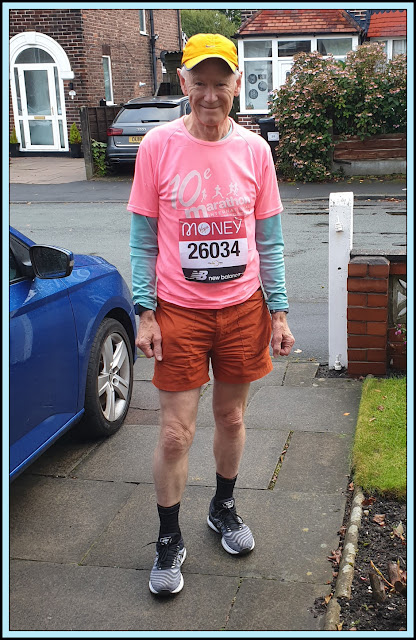 Here's a fuller report on last week's 'London Marathon', that for me took place mainly in Wythenshawe Park.
It was a cool, but thankfully dry, morning in Timperley. I'd been planning to start at around 9 am, but I was breakfasted and ready by 8:20. "You need more time to digest your breakfast" claimed Sue. I ignored her - it hadn't been a big breakfast anyway!
I'm pictured above setting off from home. My route, shown at the foot of this entry, started by way of an adaptation of our regular 5 km (not)parkrun, to avoid the marshy areas that collect on that route after rain, of which we'd just had over 24 hours' worth. I didn't want wet feet.
Then another 5 km or so took me to Wythenshawe Road, where Sue passed me in her car, just before the park entrance that she expected me to turn down. She then met Cary, who was planning to run with me at this point, an arrangement of which I knew nothing. I think Sue had hurried him along, given that I'd started earlier than she thought I would.
Oblivious of Cary's waiting presence, I continued past the entrance and ran around the perimeter of the park, eventually turning in to meet Sue in the car park, for my first 'banana, Vimto and jelly baby' support. 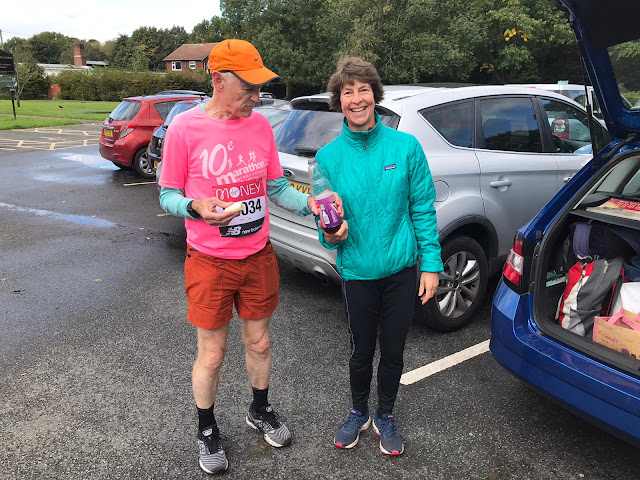 At some point hereabouts, Cary did find me and did a good shift with me before handing over to Andy (Wythenshawe parkrun Run Director) and Ron (stalwart parkrunner). I had no idea that this 'support' had been orchestrated via a WhatsApp group of regular parkrunners, and I didn't twig this until the end, when I was told about it! 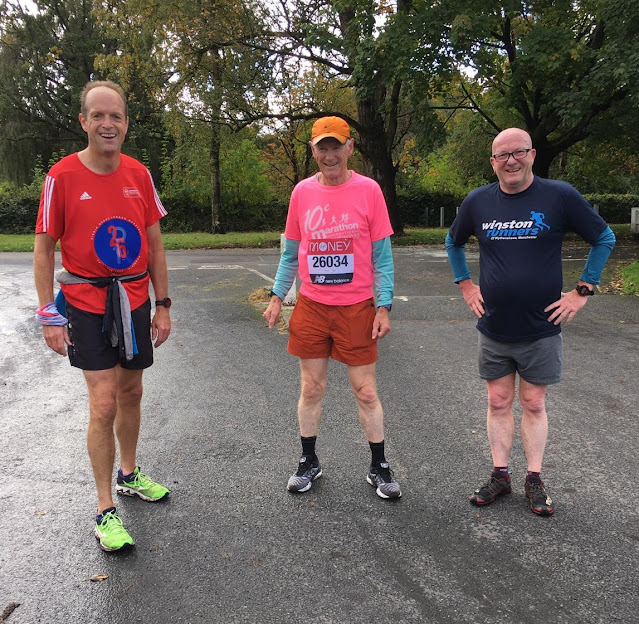 Eventually, Andy peeled off to head towards the Trans Pennine Trail, where Mark Hunter was doing his virtual run. Mark is making a miraculous recovery from a rare form of cancer and was running in support of the Christie Hospital. Press coverage and the support of Altrincham AC featured on his run, which he completed in the great time (after what he's been through, of around 5 hours.
After this, Laura ran with me for well over 5 km, before heading off for a run with her breathless (after trying to keep up with Laura) brother Greg. Laura was in training for a 10 km race that she completed a week later in 39 minutes. Running with me must have been very gentle, being about half the pace of which she's capable. She's pictured below on my left.
All this time, Andrew J was supporting me from the car park, and parkrunner Andy (injured at present) was cheering me on from near the cafe. Jeanette was also a welcome supporter.
By now, and I have no idea of the mileages at which various people joined in, Martha and her children Alice and Eddie had joined the party, with dad David pedaling not so furiously behind. 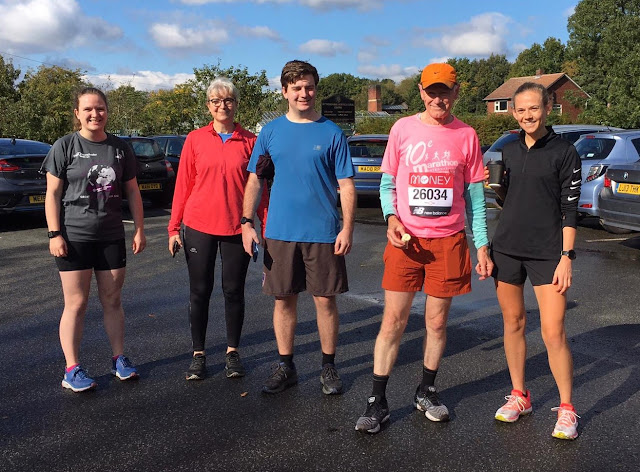 Eddie peeled off after a while to source a bacon butty, and David got fed up with the slow pace and disappeared somewhere. But Alice was very attentive and hung on right to the end. She and Martha must have covered quite a distance. By now, Paul and Rufus had long since tracked me down (with difficulty) and carried on with me to the finish.
There were a handful of others doing the same thing as me, and earlier I'd met someone on the canal towpath, but I think they started later than me and we didn't really cross paths.
After more time around the perimeter - I did at least four laps, this next picture was taken by Jenn's team, who together with Kate and Charley were waiting for me on the one o'clock shift, some time after Cary had re-joined the party. 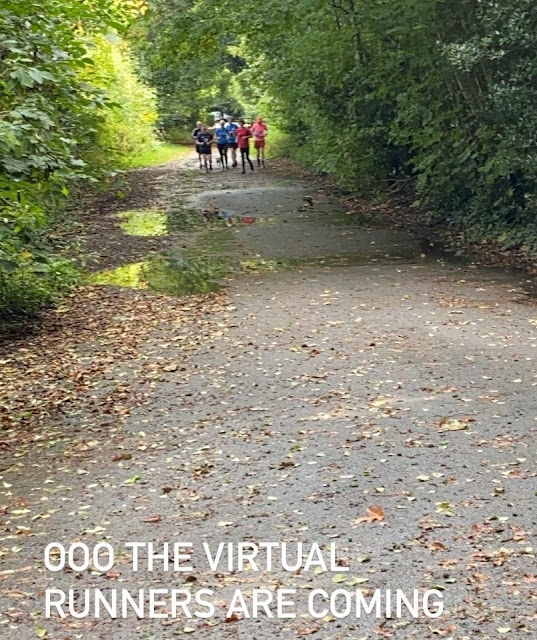 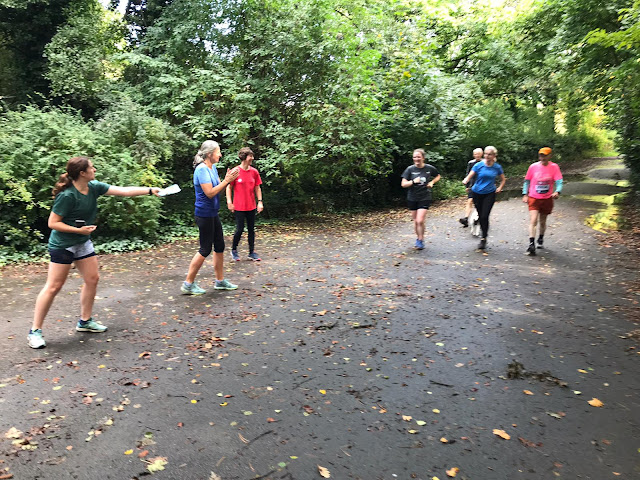 More sweets were handed over and consumed, with about 8 km to go. 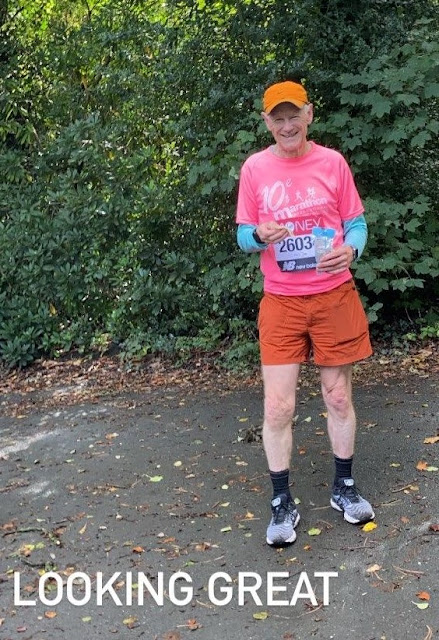 The next few shots were taken whilst the team was steering me in a somewhat random direction to the finish, not knowing how far it was to go as I had the watch and the London Marathon 'app' that in the end took me 685 metres beyond the point where my Garmin claimed I had covered the requisite 26.2 miles. 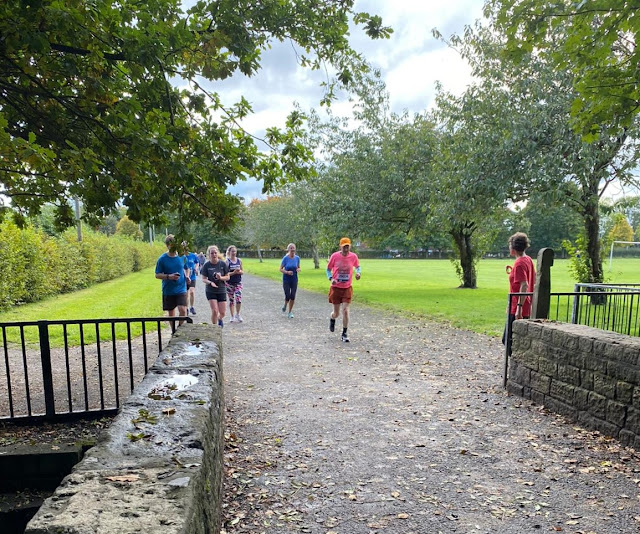 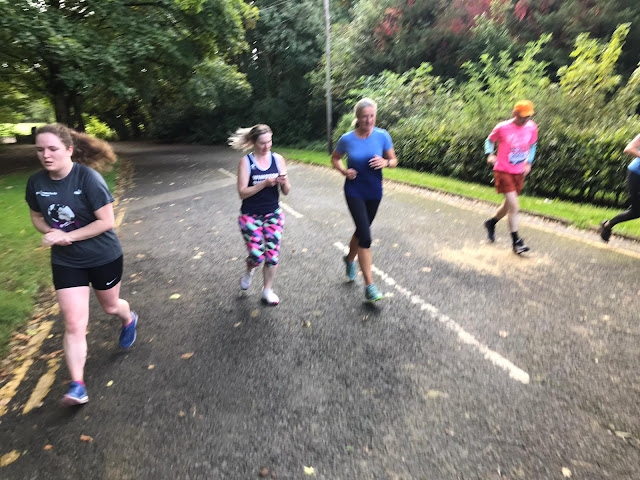 Here, I'm chatting with Charley whilst Cary and Kate lead me past Wythenshawe Hall. 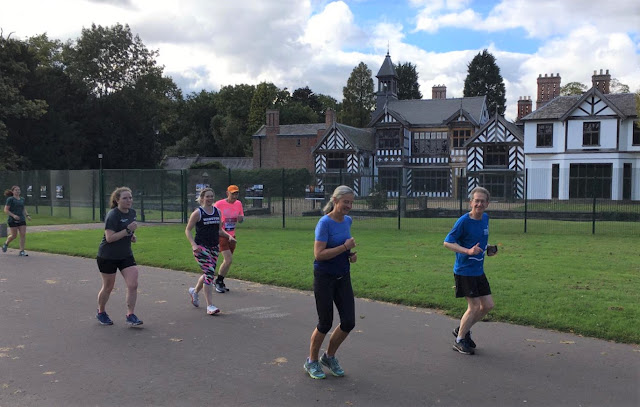 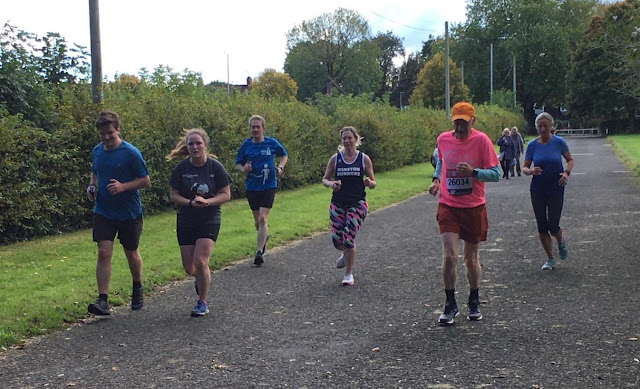 Sue joined in towards the end, having fed me three bananas and a few jelly babies from the car park support point. She was joined by Paul and Rufus, Eddie (resting after his bacon butty), and Martha, for a short break at the sculpture that several of them had never visited before. 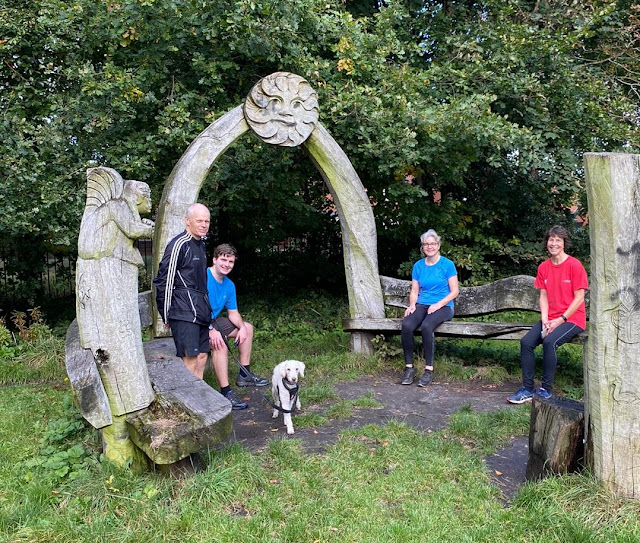 They had to run hard to catch up, as I sped up to run kilometre number 42 in about 7 minutes, but I slowed down again after the 'app' took me that 685 metres beyond where my Garmin gadget thought I'd finished! At least I made Charley and Martha run properly to keep up... 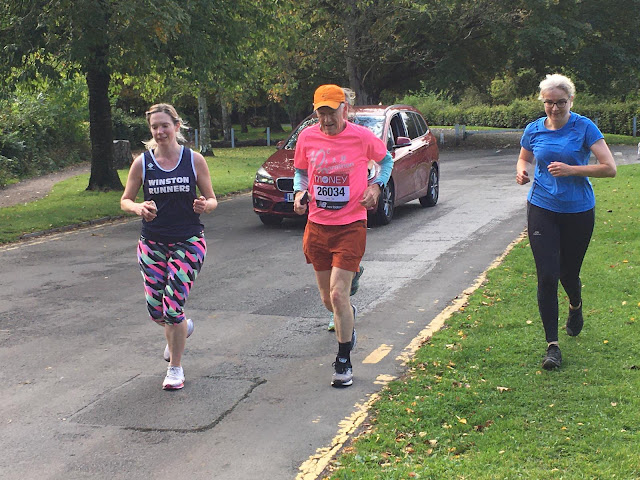 And so, in the lane next to the car park, a vibration in my pocket (the 'phone's app telling me I'd finished), after 5 hours and thirty minutes, I was able to draw to an abrupt halt and offer the usual expressions of relief and delight. 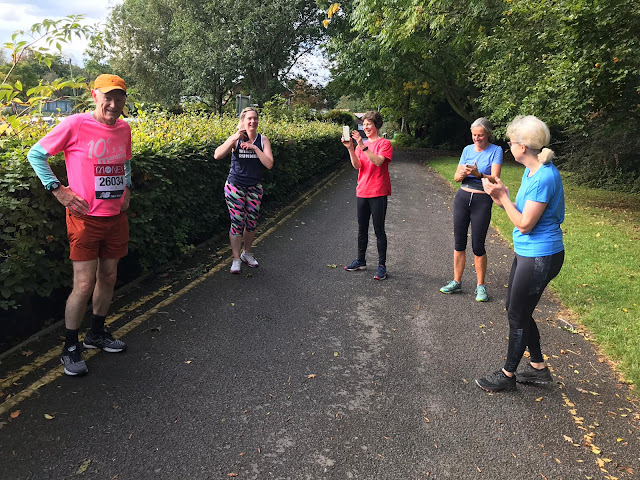 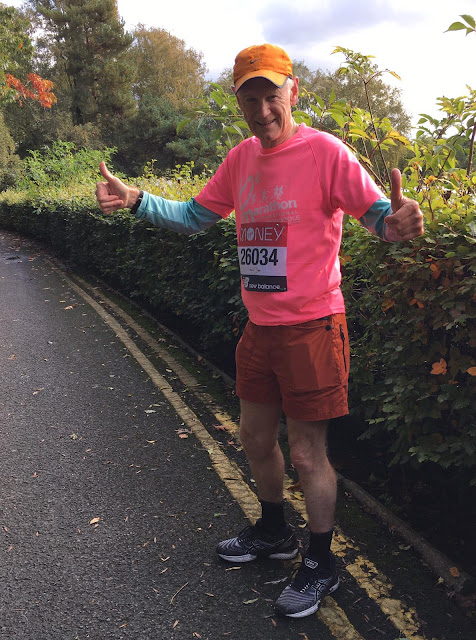 Cary kindly provided a large bottle of San Miguel, bottle opener and glass, which I enjoyed with the team, socially distanced of course, at the picnic benches where we habitually assemble on Saturday mornings. 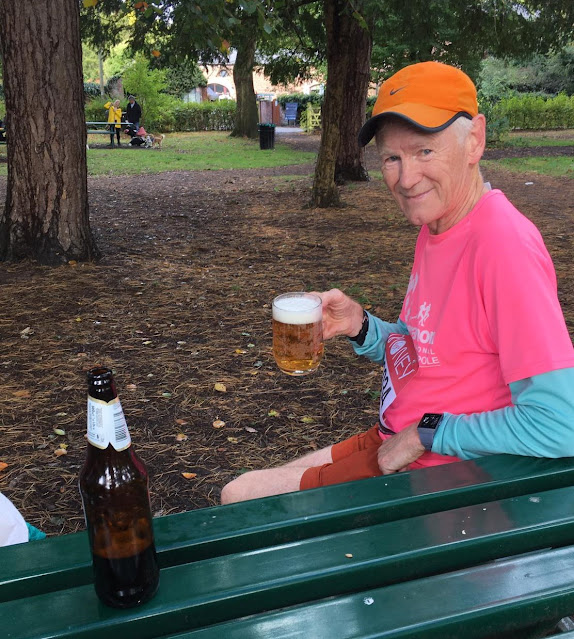 Andy returned after his run with Mark, only to find that I'd already finished and had downloaded my certificate. 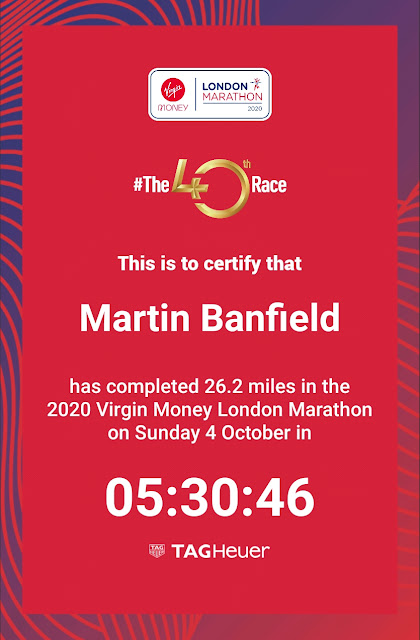 A 'Run Profile' was also provided:

My Garmin showed my route as follows, with some of the route being overlaid at least four times where I covered the same ground over and over again. (Click on it for a better image.) 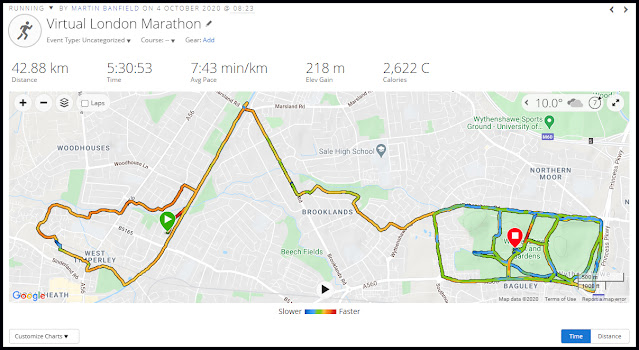