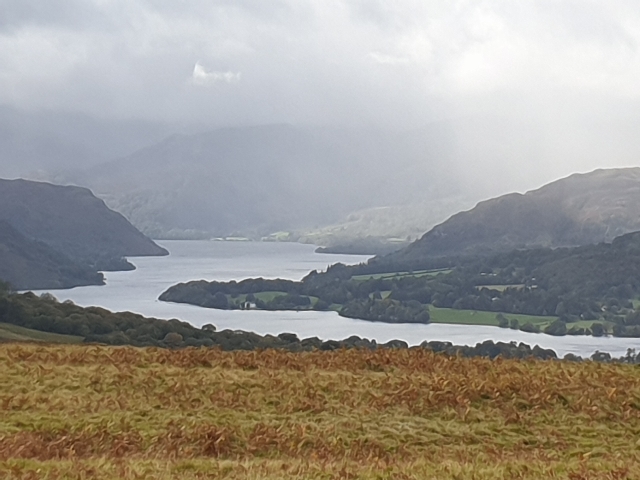 All eight of us - me, Sue, Paul and Jeanette from the Ryebeck, and Sue, Phil, Richard and Jenny from Townfoot Farmhouse, assembled at the northern car park at Pooley Bridge at 10.30. This is the access point to Pooley Bridge that avoids going through Penrith, as the bridge over the River Eamont in Pooley Bridge was washed away five years ago. The opening of its replacement is fairly imminent.
Whilst the more energetic five zoomed off to walk back to Troutbeck via High Street (a hill with a Roman road), Paul and Jeanette joined me for the more leisurely ascent of Heughscar Hill, from where today's picture of Ullswater was taken.
We took the lakeside path from Pooley Bridge. It was soon adorned with 'Ullswater Way' signs, bordered by many 'Private, No Entry' signs. Those walking the Ullswater Way Must Not stray from the prescribed route!
After leaving the lakeside at a campsite, we continued in the same direction as far as Swarthbeck, where we turned sharply onto a track that rises gently to eventually reach a stone circle and the Roman Road known as High Street, along which the others would have passed earlier.
At one point Jeanette charged on whilst Paul and I admired the view along Ullswater from Wainwright's Sitting Stone.
Paul constantly scanned the scene for wildlife, with the aid of his binoculars. At one point he was thrilled to spot a sheep in the distance. Sadly, on closer inspection, it turned out to be a rock.
There were a fair number of people out walking or mountain biking today, despite a strong wind and few rain showers. We chatted with some of them. We did not envy the intrepid five, who were no doubt battling against the wind on High Street.
Lunch was taken on some rocks in the lee of the wind near the summit of Heughscar Hill, after which it was a fairly short walk back down to Pooley Bridge to complete this 15 km circuit by about 3 pm. So we enjoyed coffee and cake outside a café by the river. Then P and J went home to deal with a delivery of concrete slabs, and I went to Troutbeck to await the others, via a mercy mission to acquire some fish.
There were no rainbows today, but at times the light should have helped me get some reasonable images that I'll display in due course.
Later: after another good meal at the Ryebeck, we learn that pre dinner drinks are now being served at Townfoot Farmhouse.  We hope they enjoy their meal in due course...
Posted by Phreerunner at 20:48