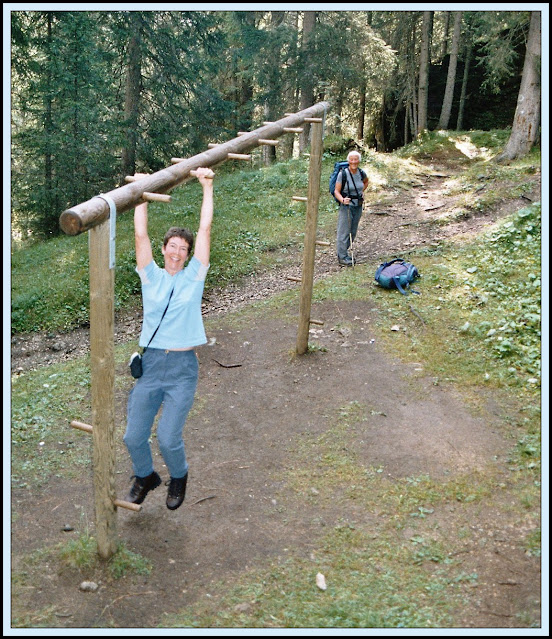 Sue negotiates obstacles on the path near Colsosco

Friday 12 August - Around the Sella Group (by Sue)

It dawned dry after rain during the night. Grey cloud hung around. With the promise of a dry day we left at 9:30, me using new boots. The plan was a circuit from the campsite into the Sella group, without any Via Ferrata. Initially the path climbed through woods. It became warm enough to change to shorts, and we admired all the flowers, including dragonmouth, cow wheat and many types of bellflower. 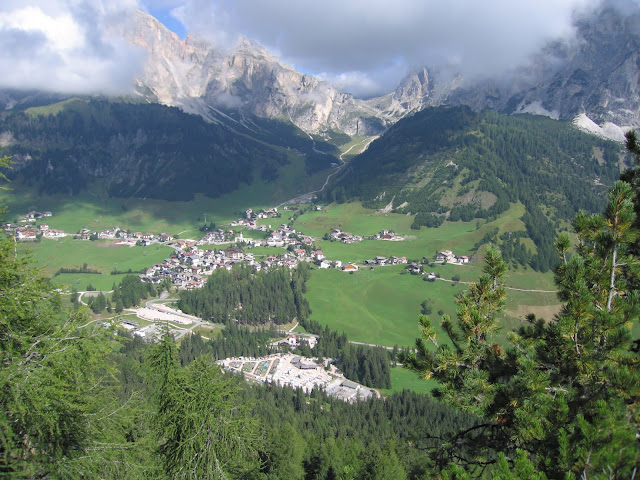 Views back to Corvara and the valley 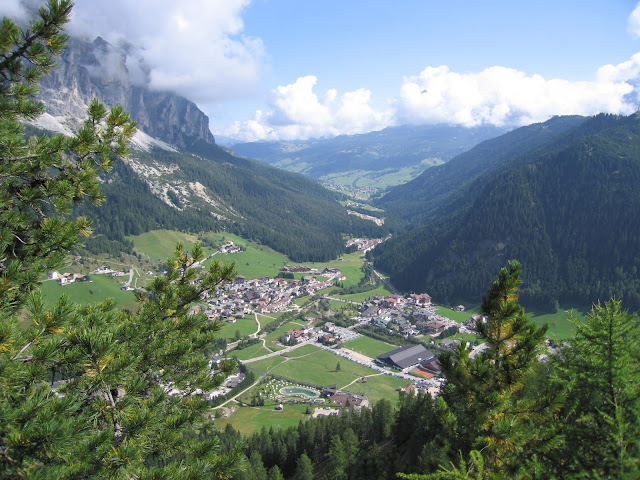 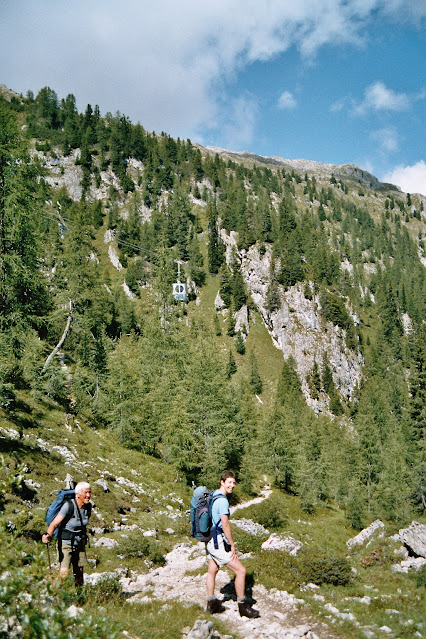 The path contoured on a lovely belvedere around the hillside beneath the cable car from Corvara, then climbed a piste to reach the cable car station and restaurant. 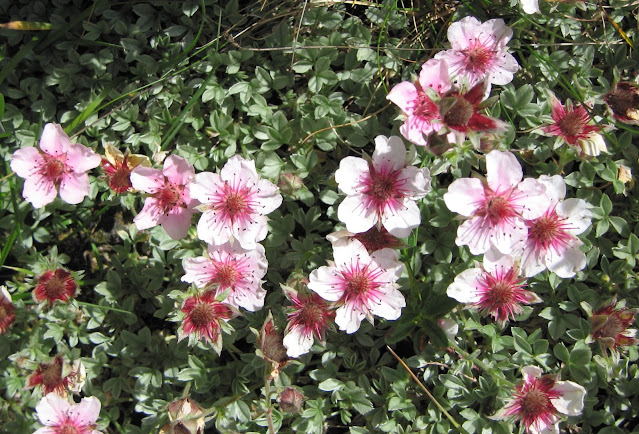 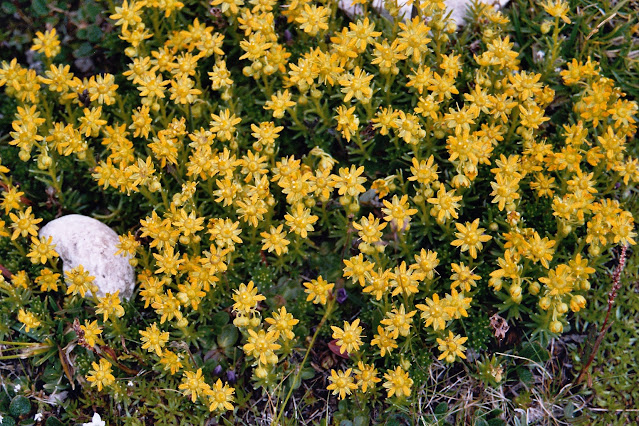 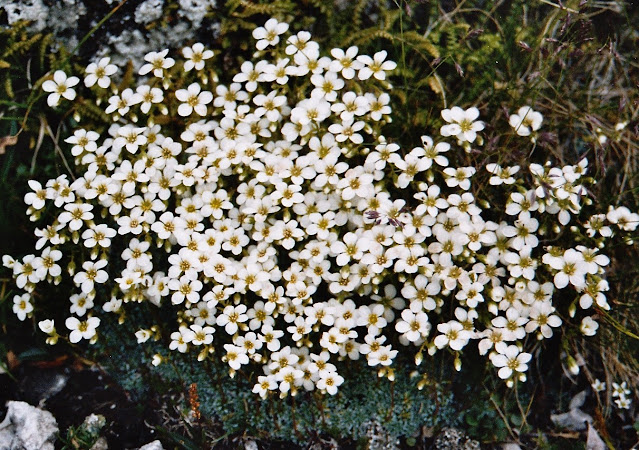 Cappuccinos and strudel were excellent, in sunshine, with two greedy goats getting lots of attention. Now out of woods, the limestone scenery dominated, and the huge rock towers loomed above, with occasional cloud on the tops. 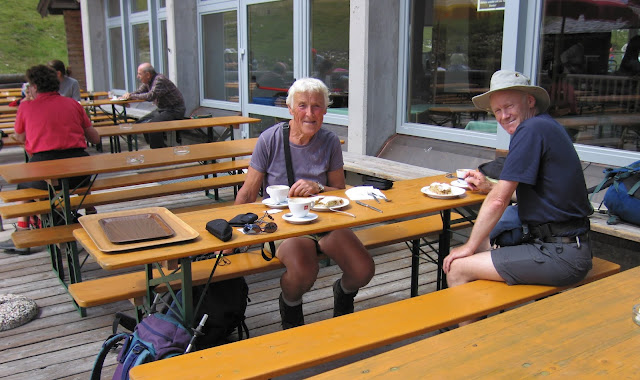 Lunch on a grassy knoll below a hut at 2500 metres, with a lack of sun! The path wove around the limestone and we turned off path 638, onto path 637, past a climbing frame and a blue slide, before heading down. 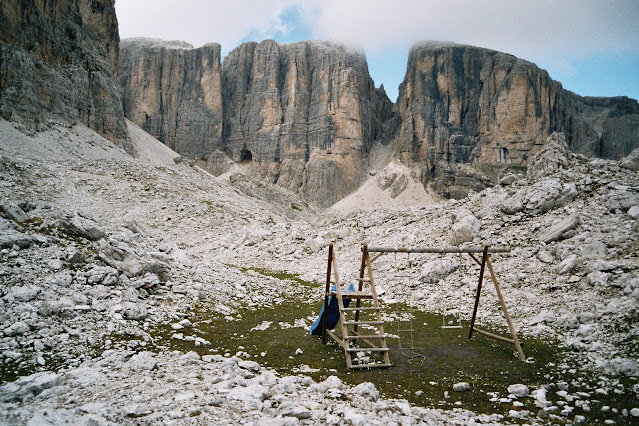 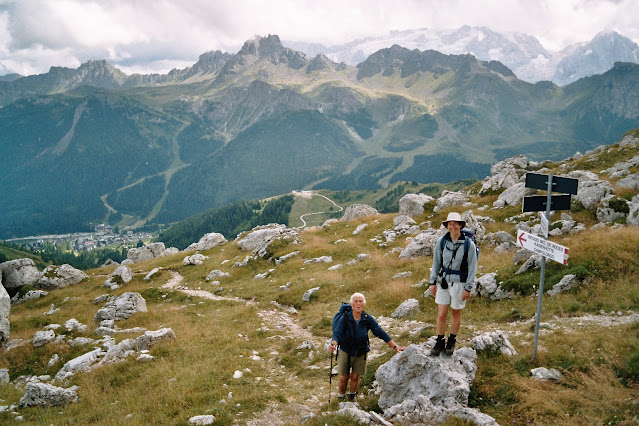 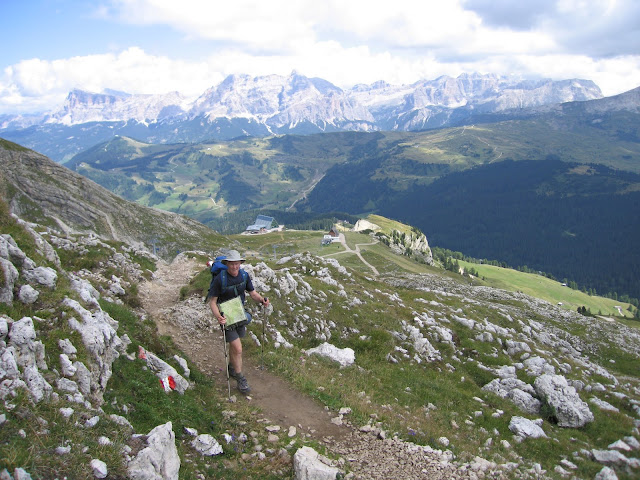 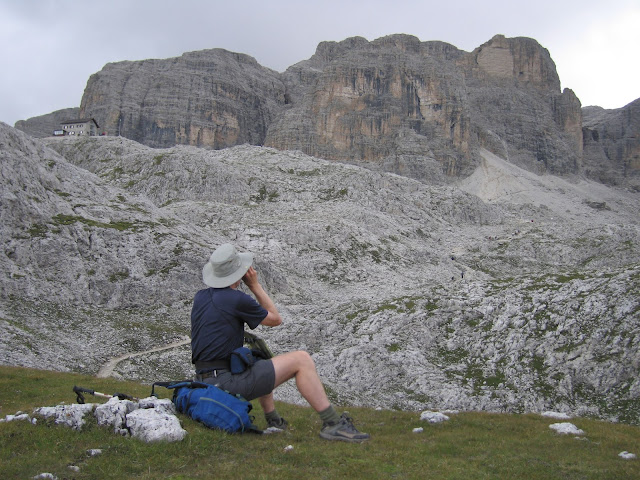 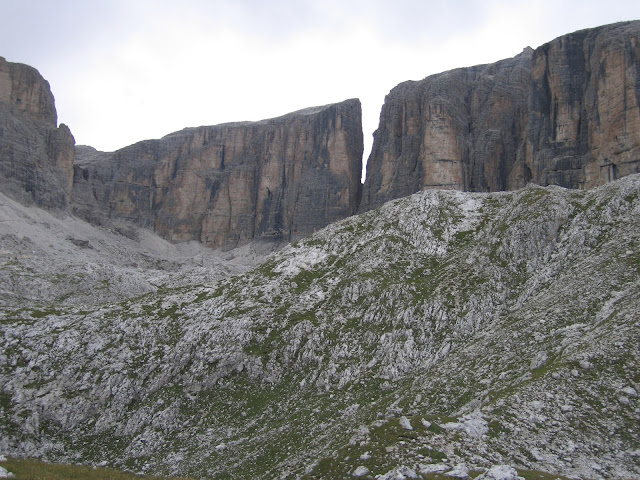 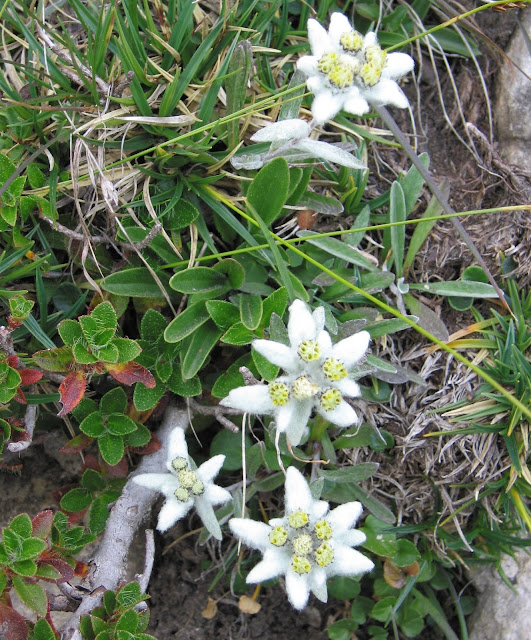 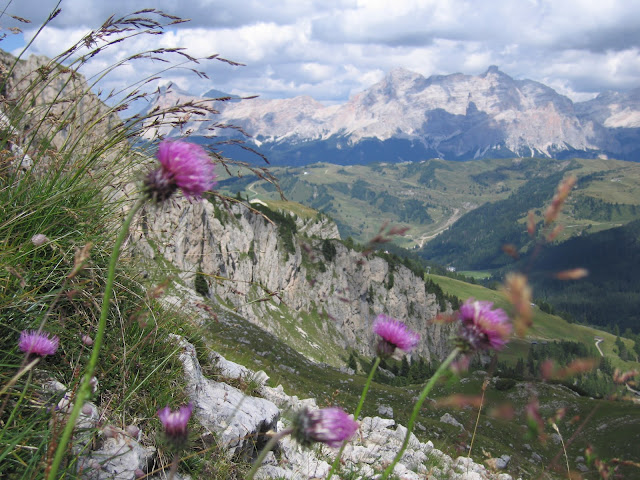 Sawwort and the Fanes Group

Here views of and its glacier were clear, with Arabba and the Campolongo pass beneath. Our circuit was complete as we reached the Boe lake again, and we stopped to enjoy a nectarine and to wonder what the distant glacier to the NNE was. (Zillertal area?) 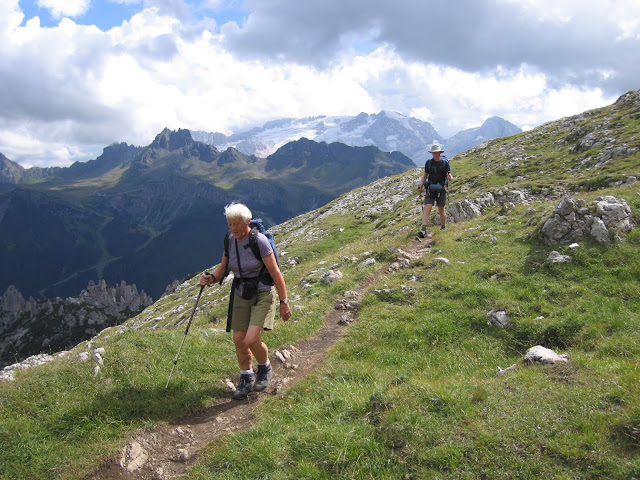 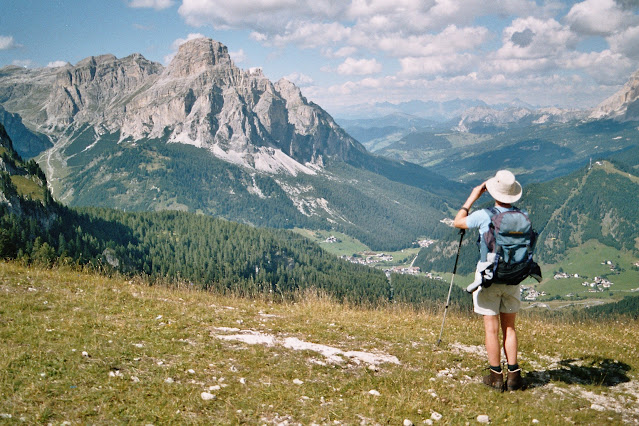 Descending to Corvara, with views to Sassongher 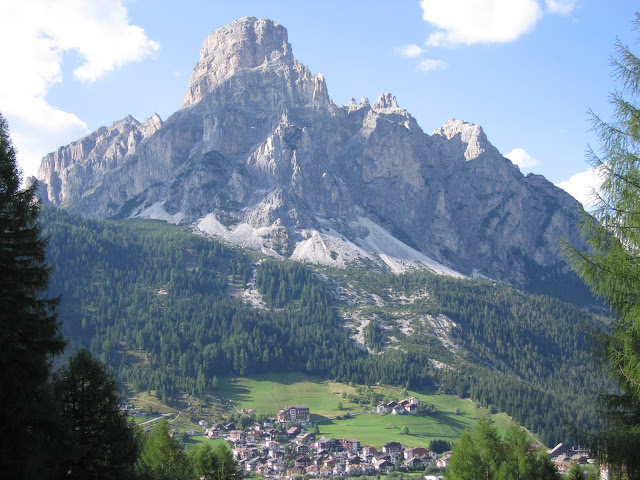 All day, paragliders had been soaring around the mountain, but none were taking off as we returned to the cable car station. The last stage was down to a rifugio at 2000m for a cold drink, (Utta Crep de Mont, where there was a dog with horns) then mainly down piste into Corvara. The mountains looked good in the late afternoon light. Beyond a new children's playground and the ice rink, the supermarket provided dinner ingredients.

Only a short walk back to camp for about 6:30 pm. The evening soon went, drinking tea, making a pasta dinner, having showers, diary writing, and Scrabble, with background music after 9:15 from a brass band playing nearby. Our part of the site now has several English speakers, including a family from Halifax who we met on the hill today.

Later - the VF Brigata Tridentina could be seen high above, the route to a high hut being lit up. Rain overnight. 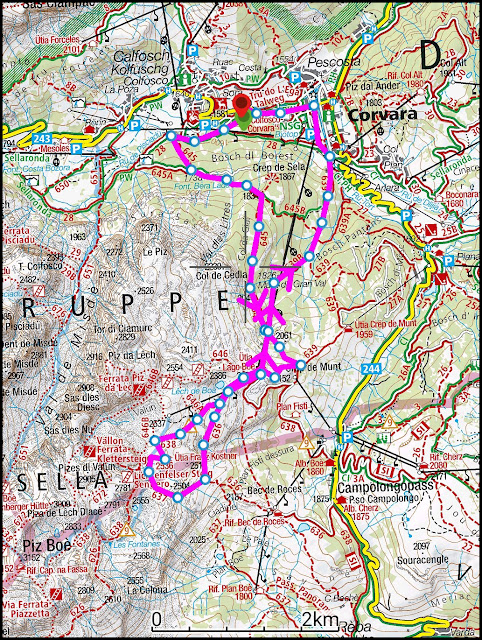 Our approximate route - 13 km, 1100 metres ascent
Click on the image below for a wider view - I haven't worked out how to get the route onto this version 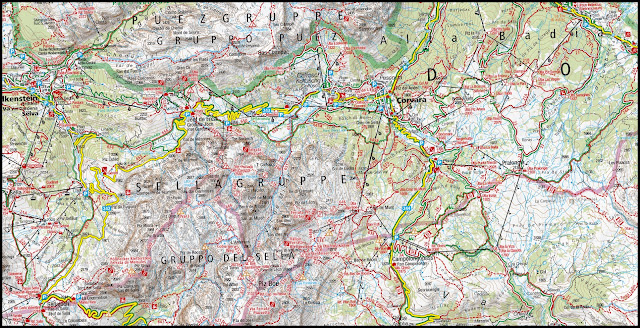 Next Day
Posted by Phreerunner at 13:43