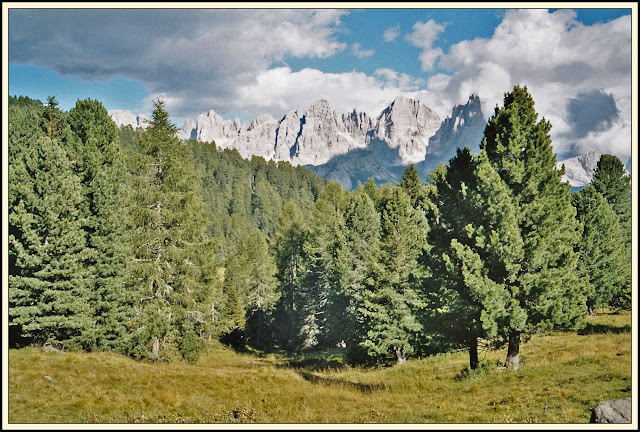 An earlier start was in order, to avoid another late finish! It was a fairly cloudy and chilly morning but the campsite forecasts were all indicating it was to be a sunny day. The 40 minute drive to Passo San Pellegrino was undulating and bendy, mainly through woods, after another shop in the small, busy supermarket. Cloud hung fairly low on some summits. 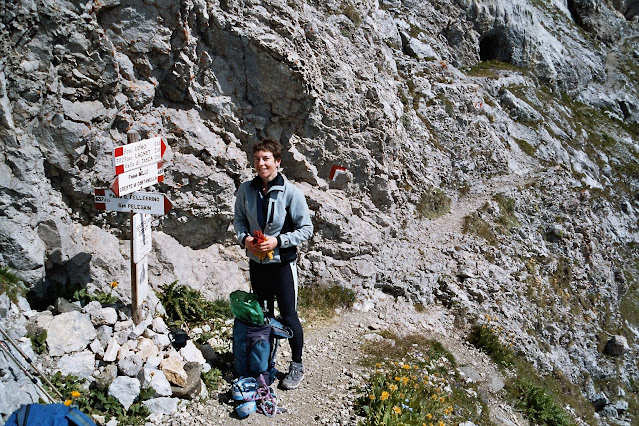 As the chairlift we needed for VF Bepi Zac was closed, an alternative lift was used, resulting in a walk up path 637 and a reverse traverse of the ridge, east to west. More clothes were needed in temperatures around 8°C! A climb up a scree slope soon warmed us up and we duly reached the Forcella del Ciadin (above), where our Via Ferrata kit was put on for the first time this trip - with some difficulty with climbing harnesses on both our parts! 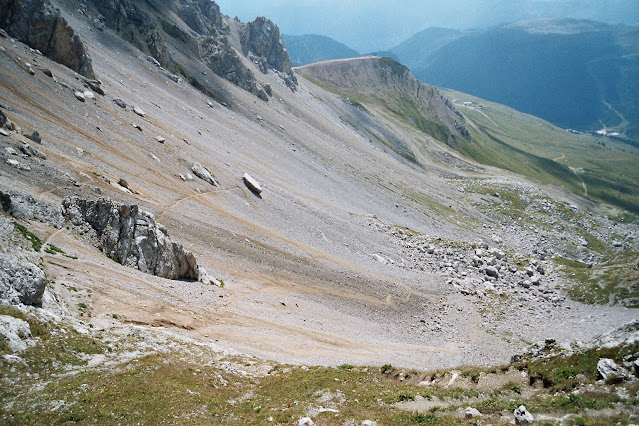 Looking back to the scree slope climb

The route was easy to follow, using tunnels and sturdy wooden ladders. An observatory from WWI held a grim display of pictures, including some of dead and injured soldiers. 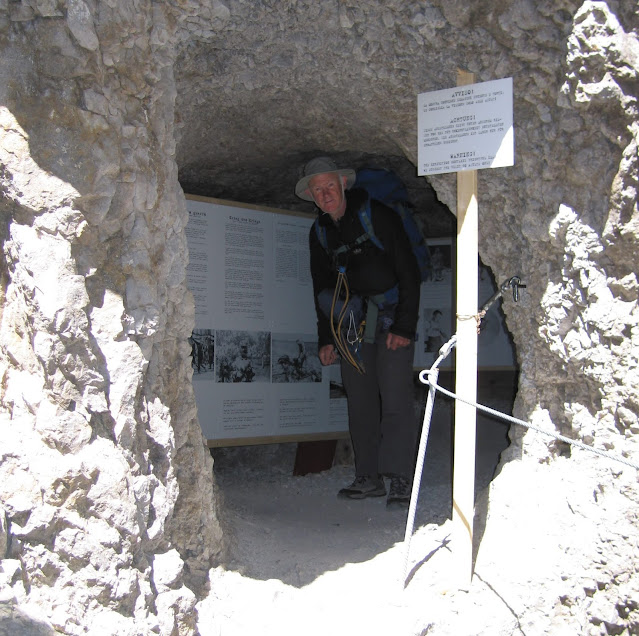 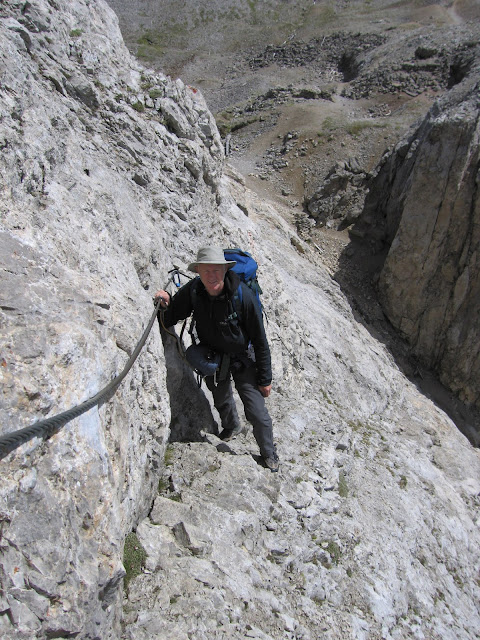 Between the VF sections were wide paths along the ridge, with flowers amongst the limestone, and the remains of trenches. The clouds continued to lift and disperse all day, giving good sunny spells, but still with a cold wind. 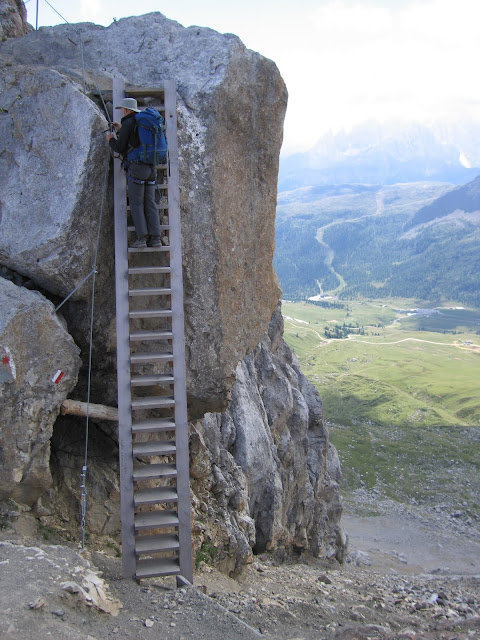 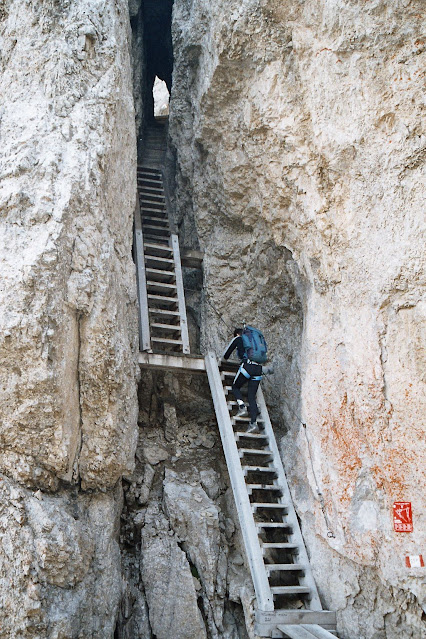 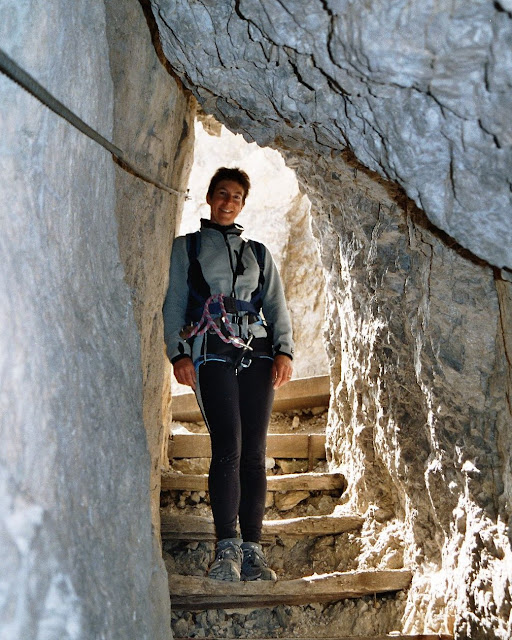 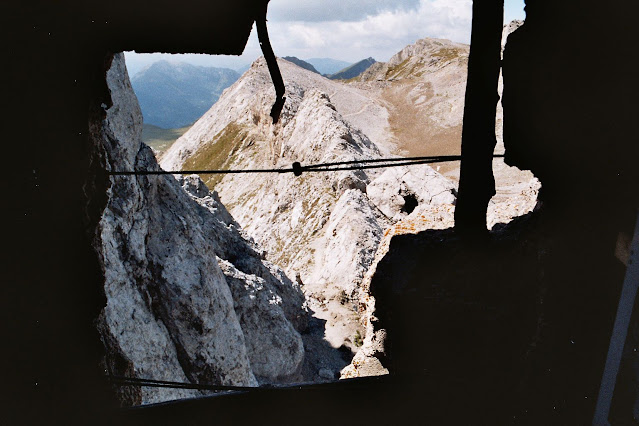 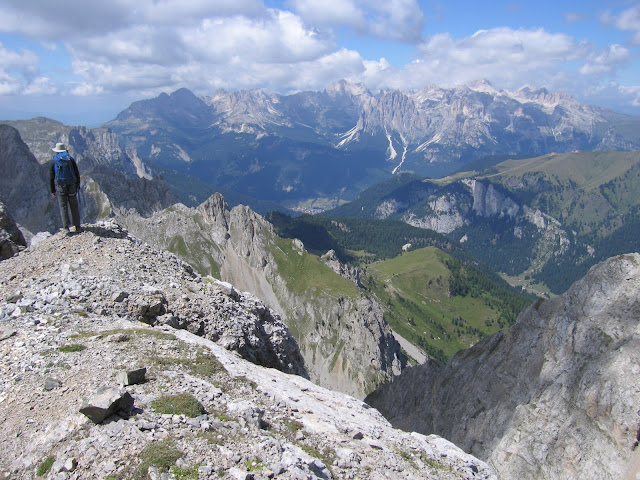 We had lunch in a trench just below the summit of Cima di Costabella (2762 metres). 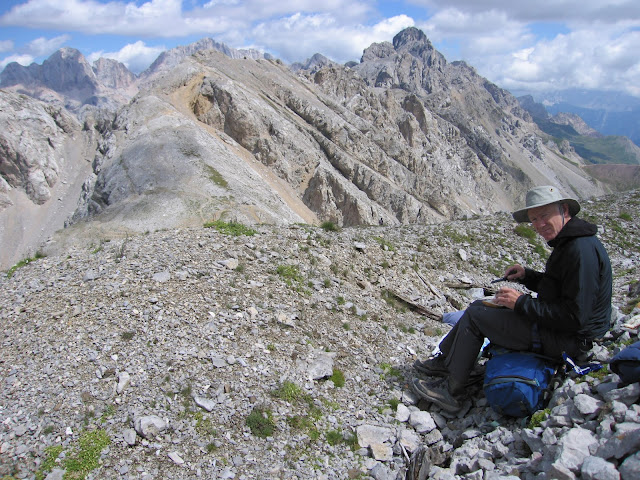 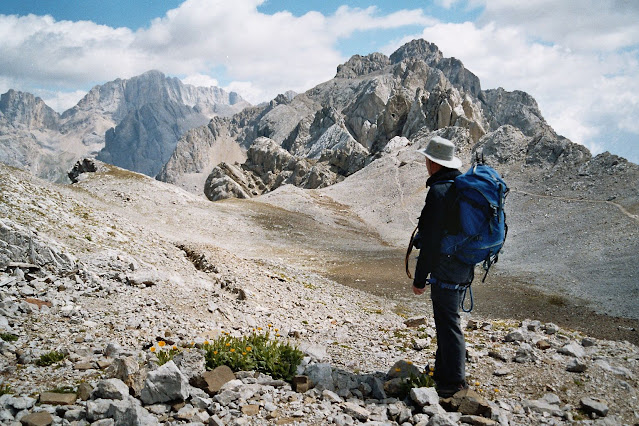 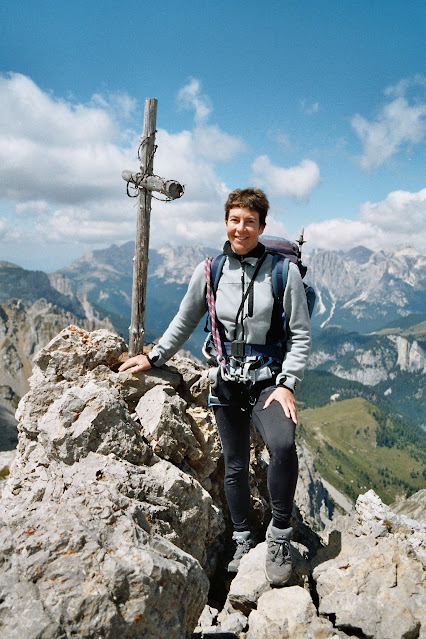 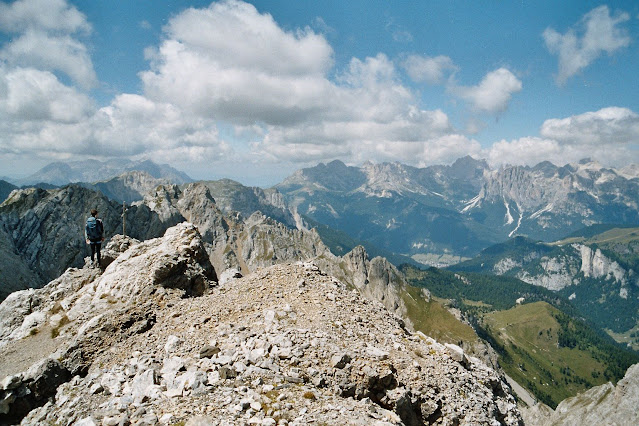 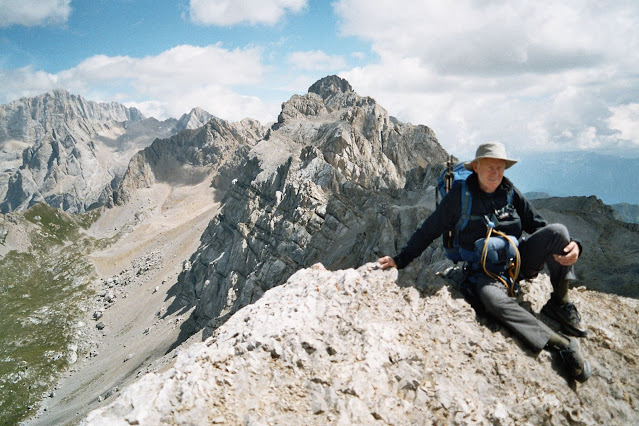 Lastei Picol
A steep unprotected descent followed, which would have been fine in the other direction. One or two more 'interesting' sections, including pegs for footholds, and we arrived at Lastei Picol, the final summit on the ridge, with a large hut just below. 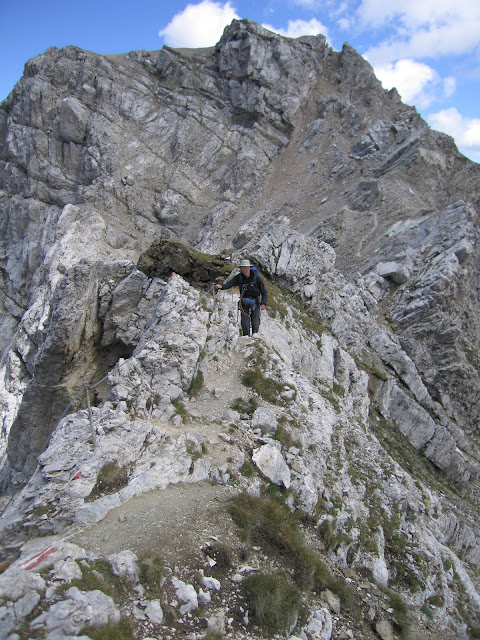 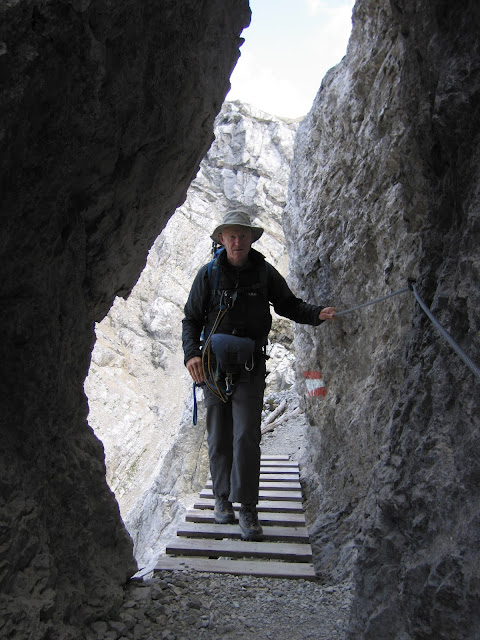 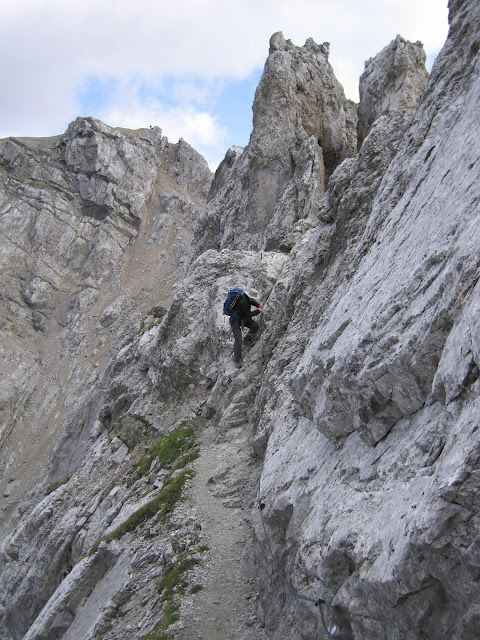 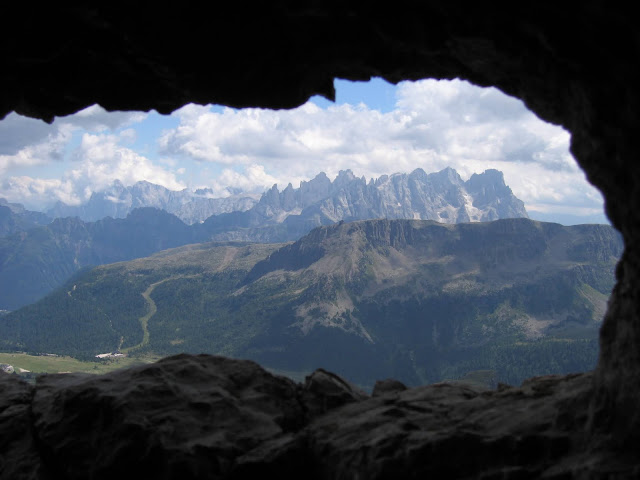 Another steep path led to Passo le Selle, which displayed a memorial to WWI in the form of a Madonna and barbed wire cross. 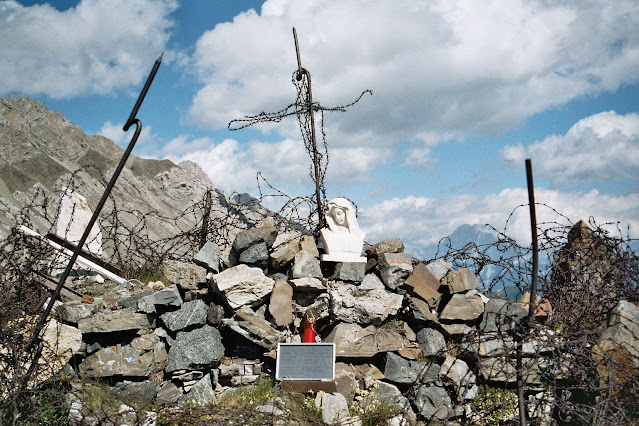 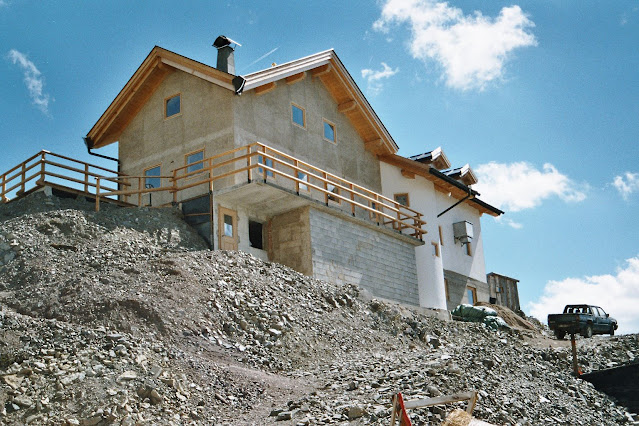 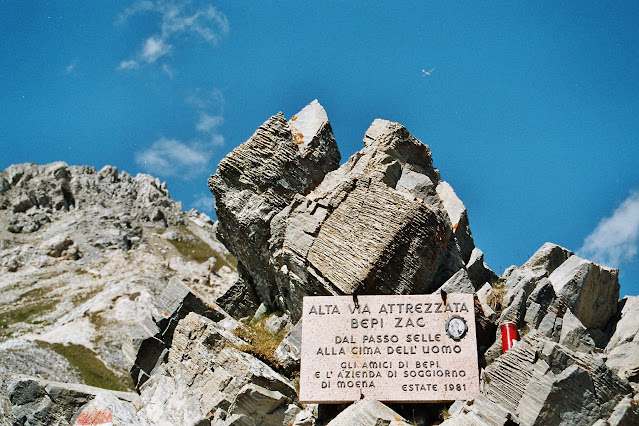 Down to t-shirts for the walk along well graded paths back to the Passo San Pellegrino, with the sound of cow bells and the company of late afternoon strollers. Finish at 5 pm. 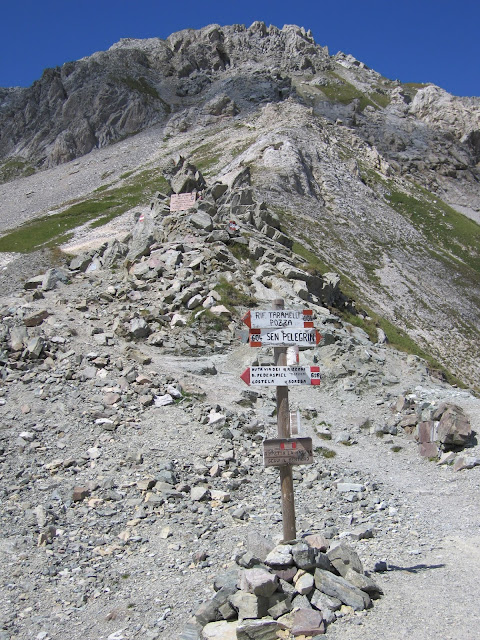 Returned via the busy , where we used a large supermarket, then Predazzo, which had a cash point to replenish our cash reserves. Back soon after 6 pm for showers and a nice tent meal of mushroom ravioli with a tomato sauce, salad and yoghurts. A 'cabaret' act outside the restaurant entertained campers able to understand Italian! 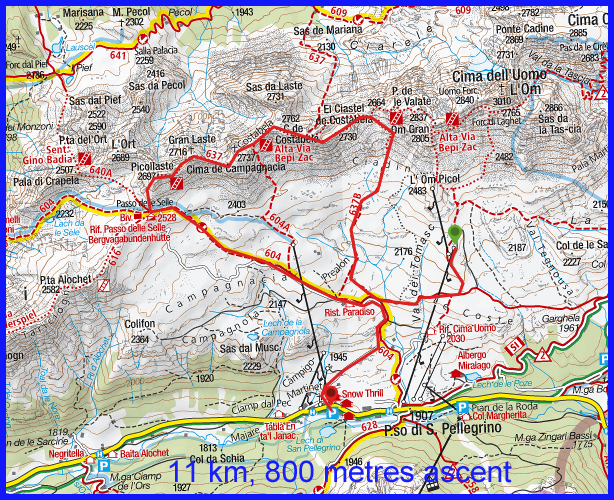 Here is an attempt to show where we went, anticlockwise today once we got onto path 637
(click on the maps for better versions, and note that I'm a Viewranger Novice) 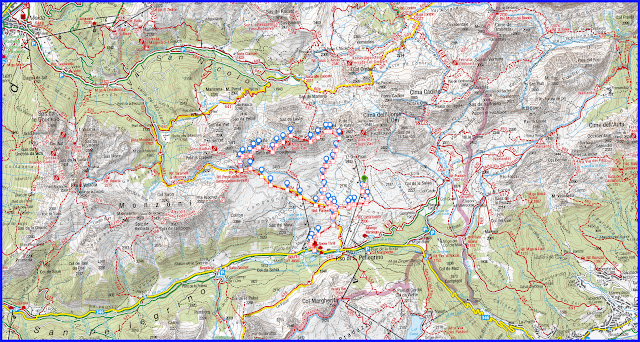 NB The order of images on this entire trip may not be correct, as they are a mixture of pictures from three cameras, the results from only one of which (very helpfully) disclose the dates on which the pictures were taken.
Note also that to view the slideshow on a mobile device (Nick?) you need to scroll down to 'View web version', click on that, then click on an image to access the pictures.
Next Day
Posted by Phreerunner at 17:25