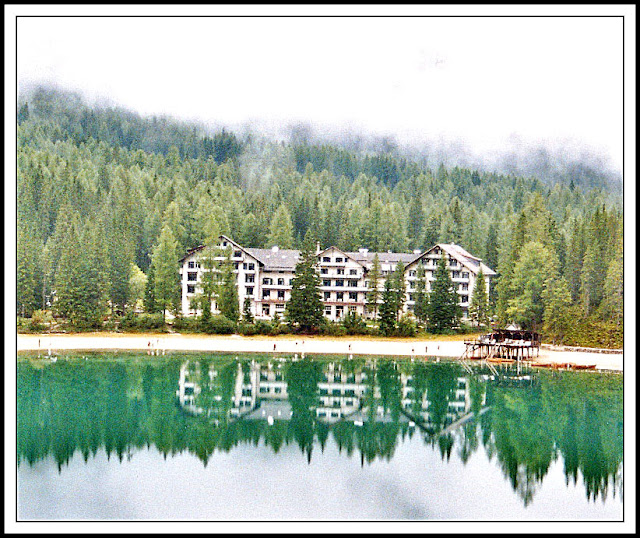 Hotel Tautermann obliged with early breakfasts and we (Martin, Sue, Ken and Helen) were on our way to by 7:20. We were there by 9:20 - half the duration of last week's trip. The overlap with Ken and Helen being dropped off and Richard and Jenny being picked up worked well, and by 11:00 we were on our way again, this time avoiding the ever present traffic jam past Munich by going via the inner ring road, and reaching Innsbruck at 2 pm after a three hour trip.

It took another half hour to locate the badly signposted Bahnhof and pick up Andrew. He had lunched at , our meeting place last night, whereas we had lunched on a sandwich at a German service station where the toilets cost 50 cents to use. (These were the days when charging for the use of toilets in the outside was very rare. These days, if we could go to Germany, paying for toilets wouldn't be worthy of note.)

And so, after speeding over the we spent ages in a traffic jam before Brunico due to a diversion down narrow lanes, then shopping for final provisions was itself a little fraught, with poor signing and a storm contributing to the difficulties. Sue eventually emerged triumphant from a supermarket and we then sat behind a very slow vehicle before finally zooming up the road through lovely meadows to Hotel Pragser Wildsee, by Lago di Braies at 1496 metres.

Arriving at 6 pm, we disembarked in the rain and Sue and I spent time sorting gear before we all bathed and adjourned for a set dinner at 7:30. A good meal, followed by a slideshow from Hermann which showed the area mainly in winter. High quality images and a slick presentation with carefully chosen music.

Richard and Jenny then headed for the schnapps whilst the rest of us went to bed at 10 pm, but I think they soon followed.