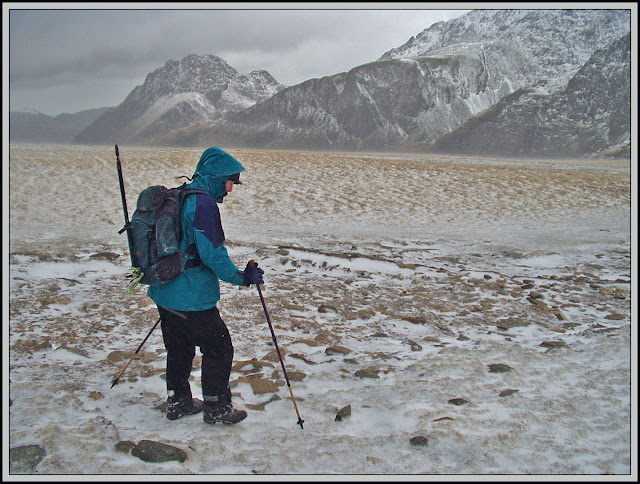 Sue and I picked up Richard and Jenny on a blustery but sunny morning - 8 am in . An easy drive got us to Llyn Ogwen by 9:45. Andrew was already there. Plenty of room in the car park (£1).

We were soon (after tea from the kiosk) off up Y Garn, which got a bit slippery and windy towards the summit. Others had put their crampons on - we didn't bother. Intermittent views, though Tryfan was clear all day.

Now down to Llyn y Cwn. On the way Sue delved into her sack and released a plastic box full of chocolate caramel shortbread. It slithered quite a long way down the slope before being stopped and eaten.

An early lunch was taken at Llyn y Cwn - possibly the least pleasant picnic for some time - impossible to get out of the wind. I donned crampons. [Old foot crampons were best today, and comfy old boots.] Scavenging seagulls (herring gulls) pestered us for scraps of lunch.

On up Glyder Fawr, but so windy there was no incentive to find the summit in low visibility and soft snow (we passed to the north of the 1001 metre summit). Carrying on, it was easy at first - soft snow and a following wind, then, approaching Bwlch y Ddwy-Glyder we hit a patch of ice and strong wind that took about 30 minutes to escape from. It was a memorable experience - one step (or crawl) forward and two back. Various techniques were deployed to try to break out of the grip of this windy ice-trap. Meanwhile, Andrew had donned crampons then tripped over them and distributed bits of his GPS unit all over the snow! Sue put her crampons on after this wind trap incident.

We decided to turn back here, as I knew it would be relatively easy to retrace our steps and descend by Devil's Kitchen. Another group expressed concern and said it was calm further on, but that was uncertain so we went back. [I had also had my compass blown away (and recovered) during the incident, so I must sort out kit better for the next trip - the problem here was extreme weather in which no adjustments could be easily made.] Anyway, everyone was warm and Richard and Jenny stabilized themselves by locking arms and walking together, so the return to Llyn y Cwn was without incident. 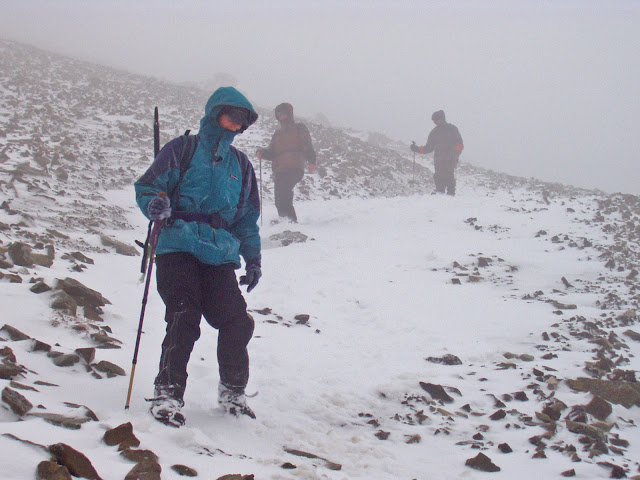 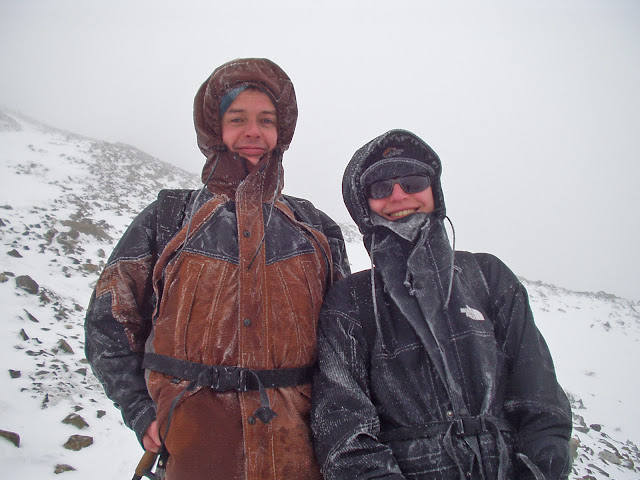 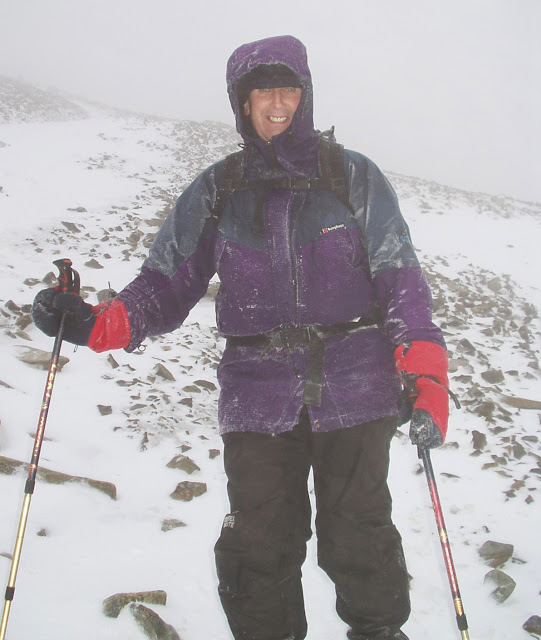 A pleasant walk down from there brought us back to Llyn Ogwen at 4:30, after a good day's walk and with vivid memories of being blown over repeatedly and then working out various different techniques to escape from the problem:

-          scrabble and crawl amongst an array of flailing limbs slithering to and fro - Sue, Jenny and Richard 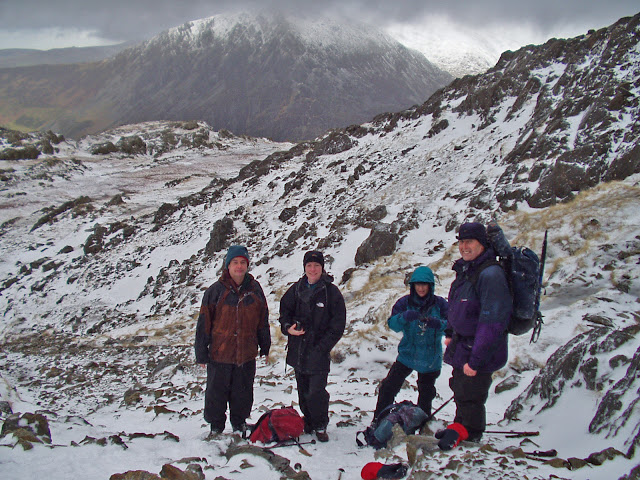 On the descent in Devil's Kitchen 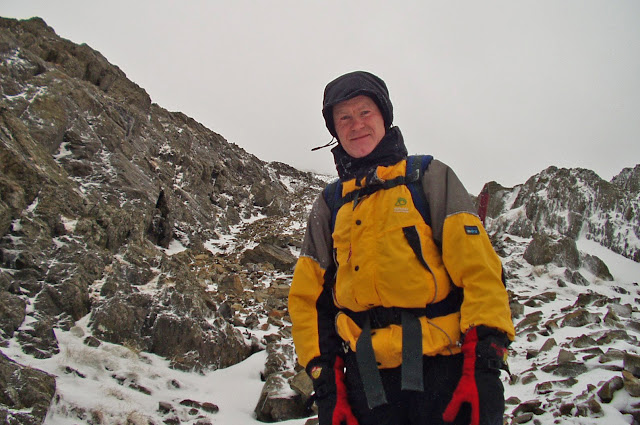 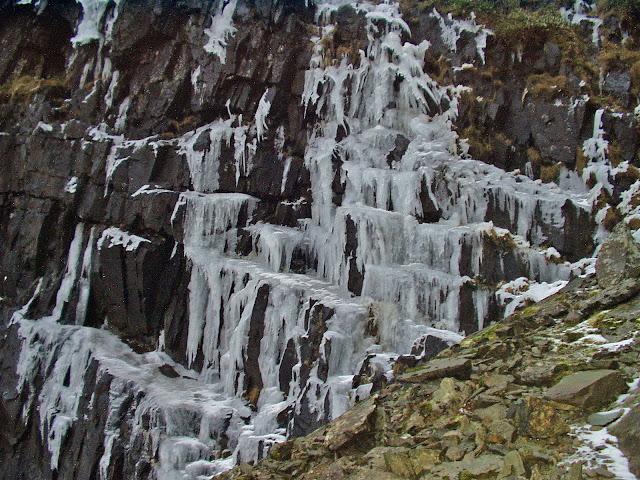 Drove down to Capel Curig, where a cafe on the left towards Betws-y-Coed served excellent pint mugs of tea. Andrew then went home and the rest of us headed for an Indian restaurant near Richard and Jenny's house in . A nice meal, but the restaurant (and others) was being terrorised by two teenage girls. The Indian waiters were very restrained and we solved the problem by persuading them to lock us in. 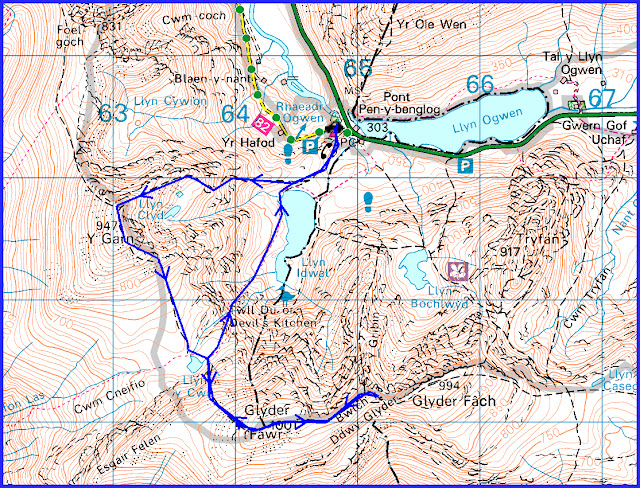 * This posting, and others to come, arises from my efforts to catalogue a few images taken with our first Olympus digital camera. Old film or slide cameras may also have been used, but the results from those aren't currently to hand. It's amazing what you get around to doing under Lockdown - these images have been languishing in a sort of no man's land on the hard drives of a succession of computers for 18 years!
Posted by Phreerunner at 17:48