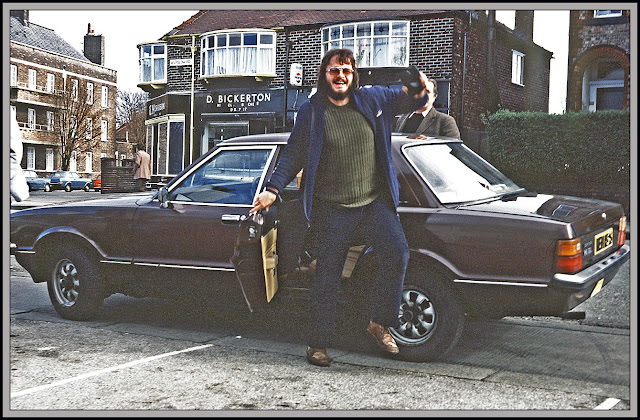 The diaries that are now up to Volume 103 started in April 1980. Today I scanned some slides from March 1980, the results of which are here, and may be of some interest to the participants.

The first picture is of Dafydd, alighting from a taxi which had taken him the short distance between my house in Adria Road and the Red Lion in Withington, where it was customary for members of TDHHC (our University hiking club) to congregate the day after completing the 55 mile Bogle Stroll. We did this for many years, but only Dafydd ever arrived by taxi. He wasn't able to walk! 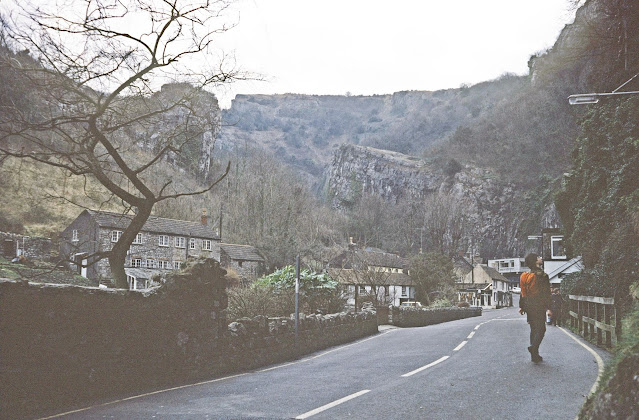 I must have struggled for 'picture content' as one of the very few images shows John Mansell and Ian Inch peering into a quarry near Priddy. 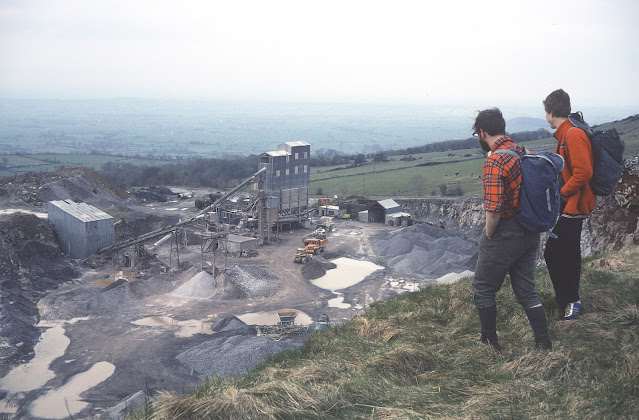 This was on a hike near Priddy. 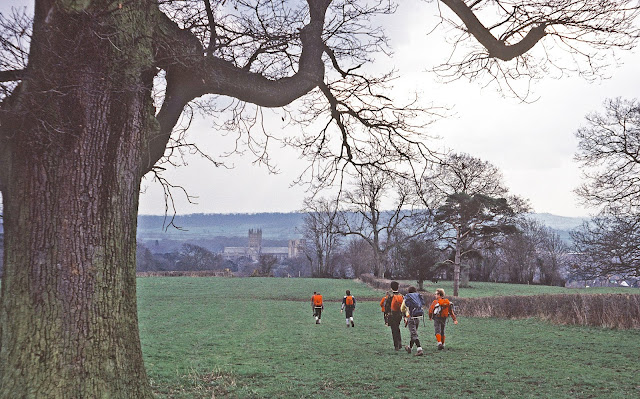 It was often dark by the time we finished our walks, and on this occasion I was inspired to photograph the sunset over glasshouses at Halfway Farm. 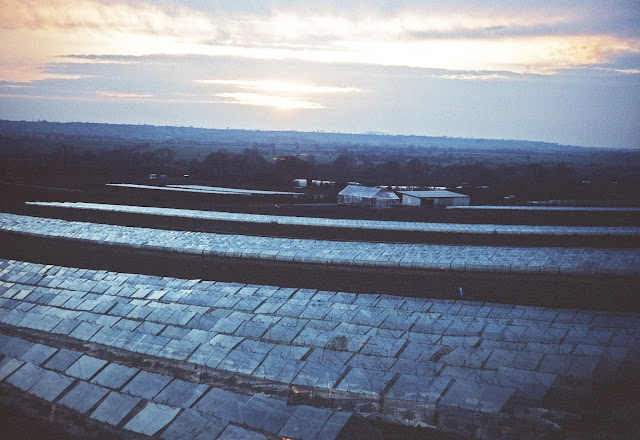 It's a shame there's no diary entry. I'll insert a hike report if I find one (very unlikely).
The following day, 9 March, looks much brighter as we gathered outside the Youth Hostel in time honoured fashion.

We rose to a tower that offered a good view over Cheddar, and one of very few of these slides that I haven't had to 'brighten up' in order to look vaguely acceptable. 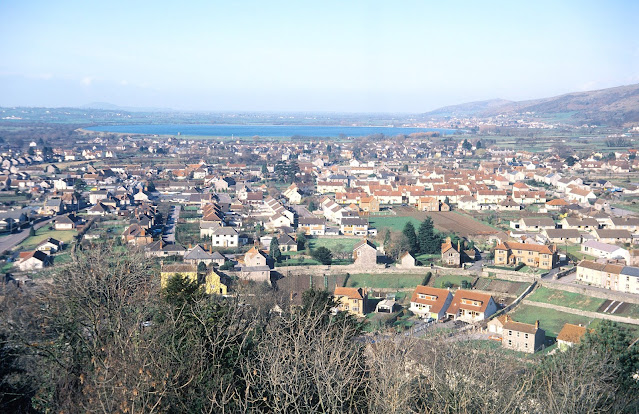 Cheddar Gorge looks quite bright here, thanks to Photoshop. 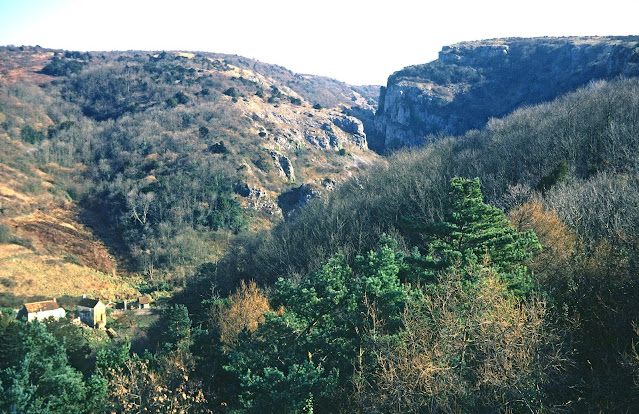 I captioned the next slide 'Ancient Monument at Priddy'. It's actually a pile of hurdles capped by a thatched roof. The information board explains:
'These hurdles are a symbolic reconstruction of the original collection which were kept here to form the pens for the sheep fair which moved from Wells to Priddy in 1348 during the Black Death. It is still held annually on the nearest Wednesday to the original date of the 21st August.' 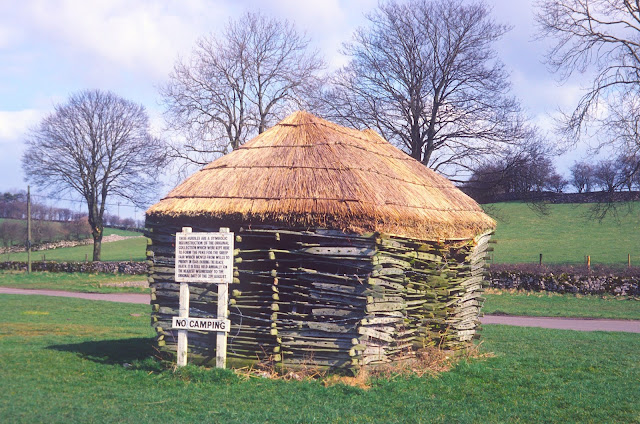 I wonder whether it's still there?
The next picture shows a little girl running away from someone who looks suspiciously like my son Michael! 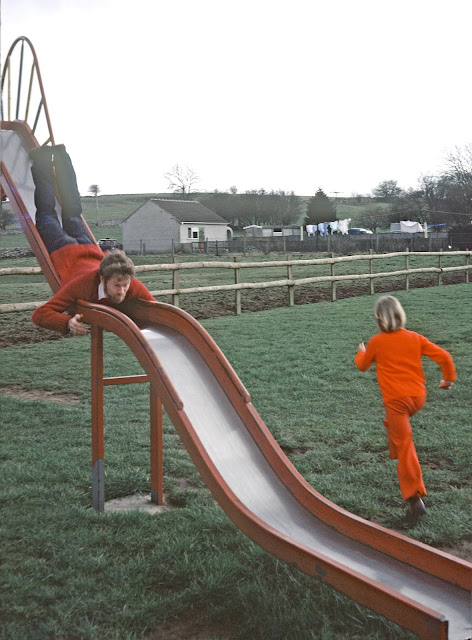 Another week went past. I remember it being an extremely challenging time at work, but on Sunday 16 March I managed a trip to Blencathra with Alison. David, Bob and Annie. The weather wasn't ideal. Here they are near Threlkeld, David fumbling with his boots and the others showing signs of apprehension. 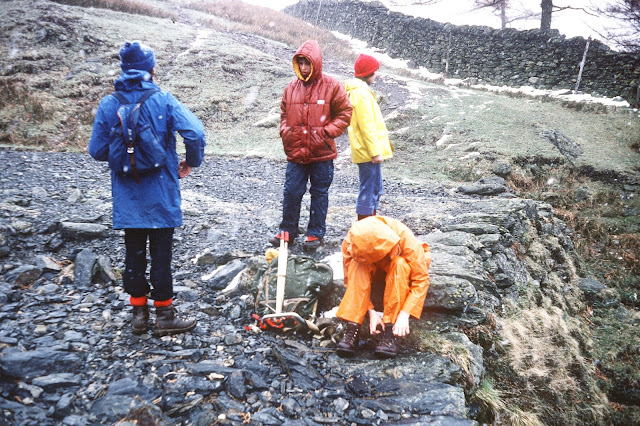 We tried to spot the summit. "It's not up there!" 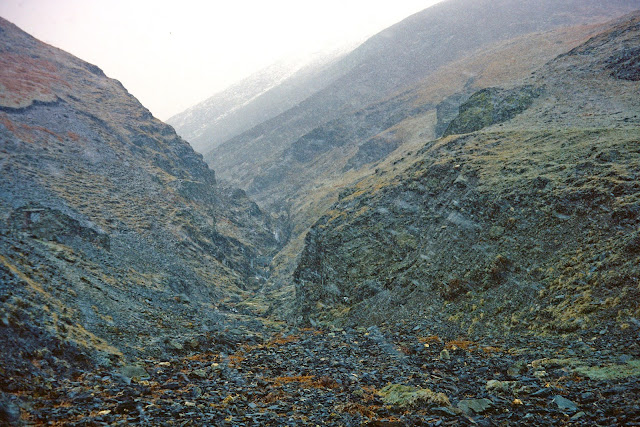 Bob and Annie emigrated after this. 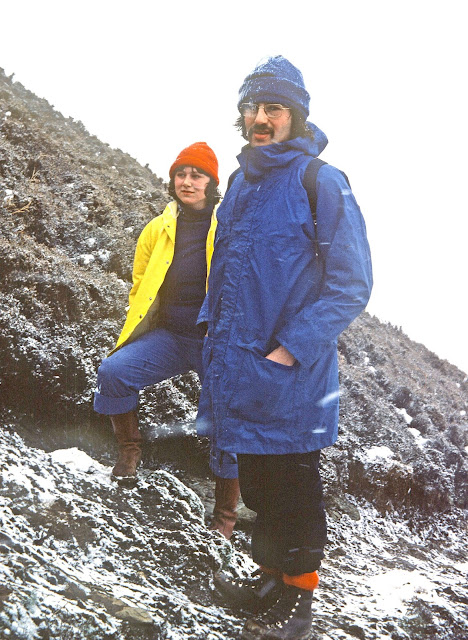 Alison should have been warm in that gear. Note that it's snowing in all these pictures. 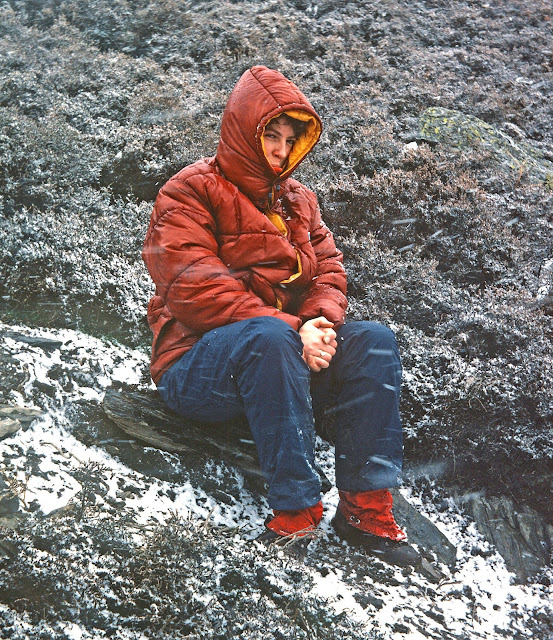 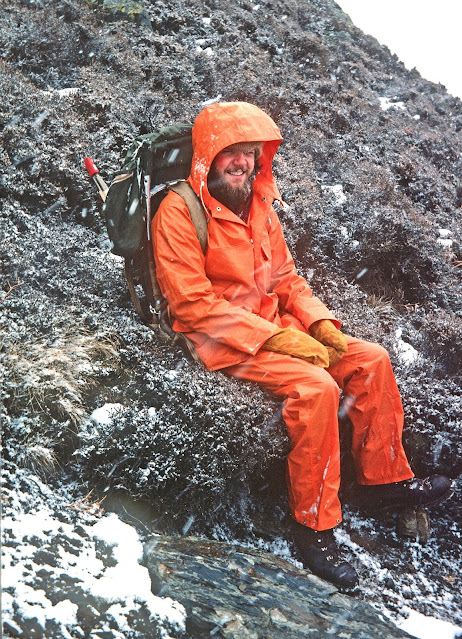 This was the only picture I took 'on the hill'. [Happy Days!] 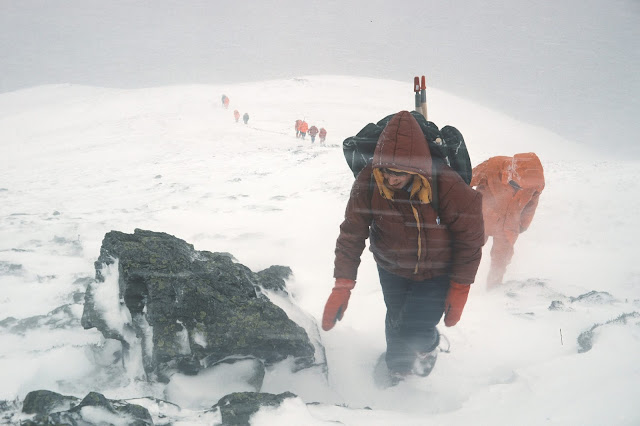 Back down, and Alison looks positively cheerful. Probably ecstatic to have survived. 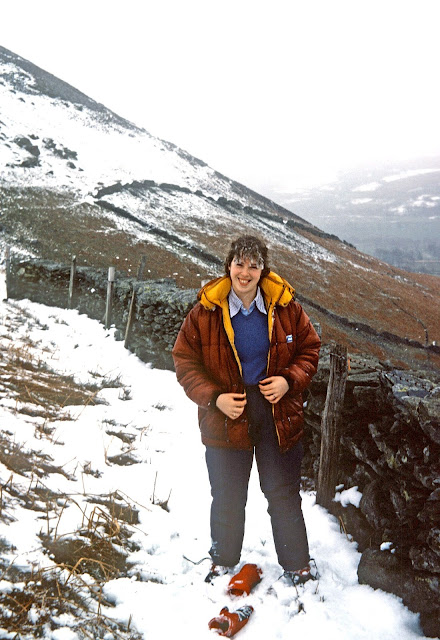 Two weeks later, Nell and I visited Alison and David in Eltham (London). We visited Greenwich. 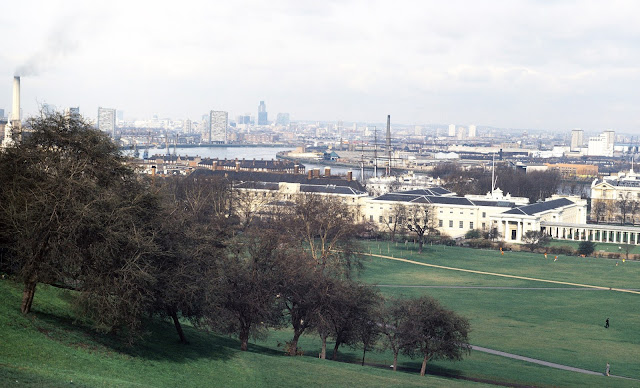 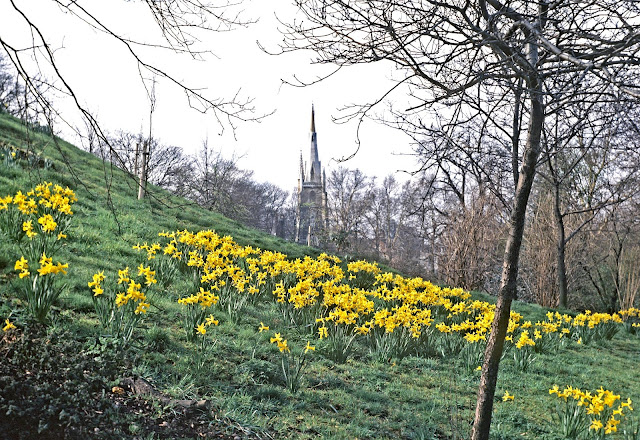 My colour slides of the Cutty Sark and Gipsy Moth seem to have an embedded monochrome feature that no amount of Photoshop will shift. 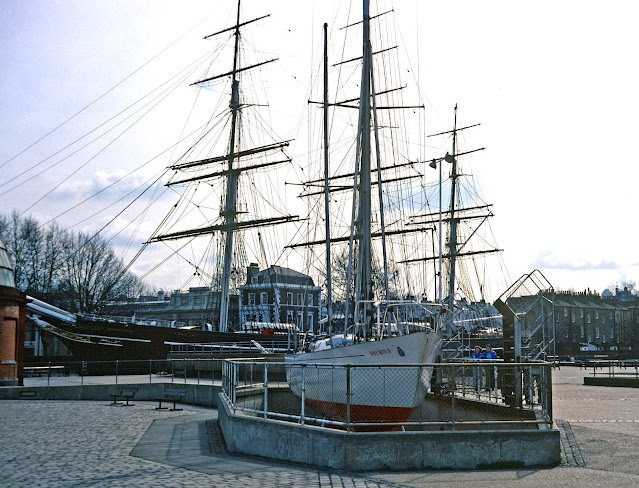 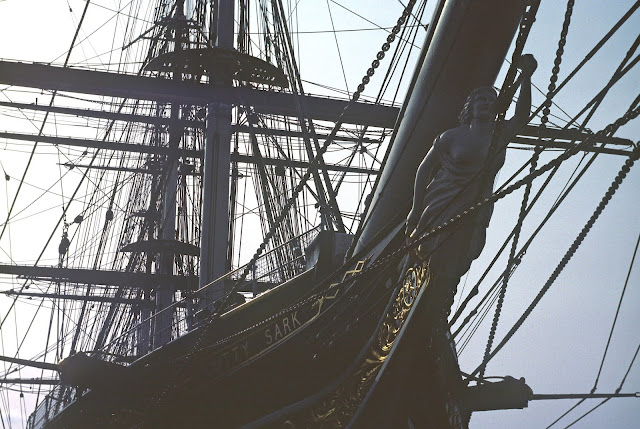 It seems that we went up Maze Hill and took photos of the National Maritime Museum. 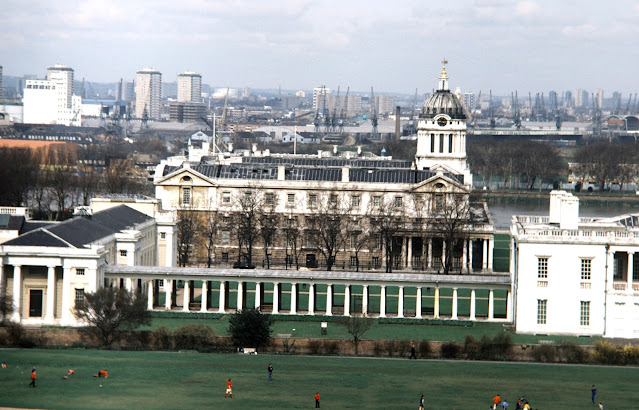 Then we went into London, where I took a last photo of March (what relief!) of a random square - who knows which one!? 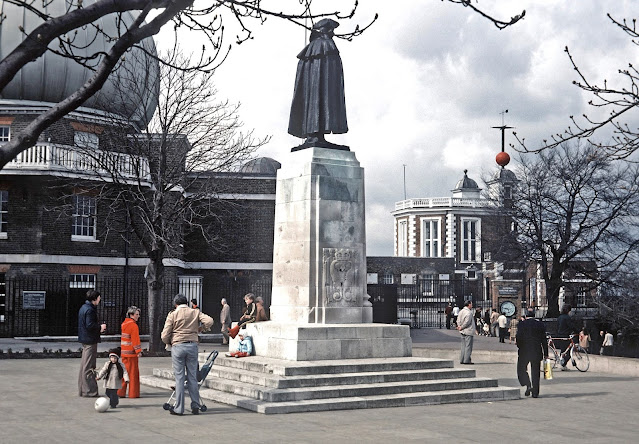 Well, wasn't that fun...
PS Nick comments: "the building in the background is the Royal Observatory. And the statue commemorates General James Wolfe, whose victory against the French in Quebec secured Canada for the British."
Posted by Phreerunner at 23:18

Thanks for the memory of what was probably my one and only trip to Cheddar Gorge. I had completely forgotten that trip, but I do recognise one or two faces.

Your last photo shows the Time Ball outside the National Maritime Museum in Greenwich - possibly you were there to witness the 'drop' :-)

More precisely, the building in the background is the Royal Observatory. And the statue commemorates General James Wolfe, whose victory against the French in Quebec secured Canada for the British.