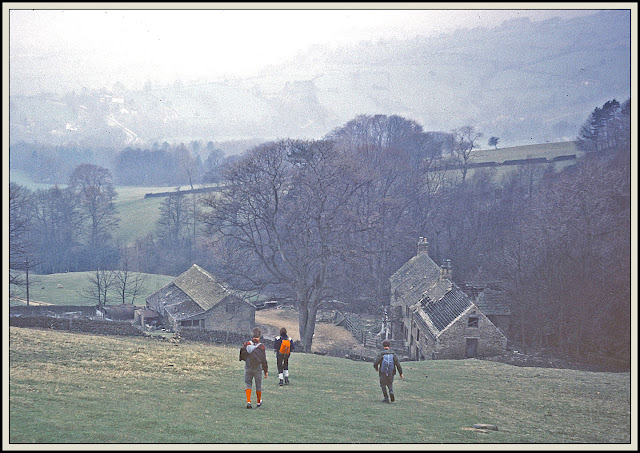 Only a few days after returning from Mull, Nick, John, Dave, Ian and I rose early and drove to Yorkshire Bridge.

Our objective was the 'Derwent Watershed Walk', as described on Page 171 of 'The Big Walks' book published in 1980 by Diadem. (I know this entry will have some readers reaching for their copy of that book to re-read Phil Cooper's narrative.) Our own diary entry, assiduously typed up by Nick, is reproduced at the foot of this posting.

By 7am we had parked up at the start, gone over Win Hill, and were walking into the village of Hope, as pictured above.

We made good progress over Mam Tor and other tops, reaching Brown Knoll by 9:30, with Ian lagging behind - just pacing himself. 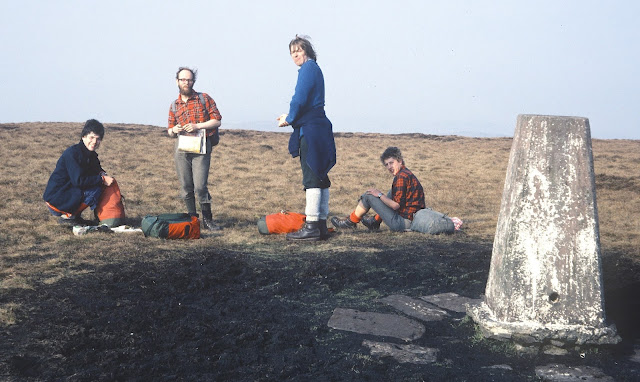 In increasing wind, we strode onwards to Kinder Downfall, reached at 10:40, where we enjoyed a ten minute break. 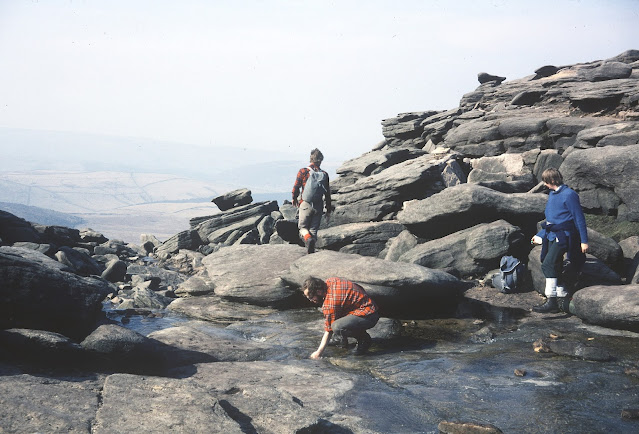 Bleaklow Head and the Wain Stones were reached by 13:30. Ian found time to gobble down his lunch and practice his climbing skills on the stones. It was a fine day to be out - a blue sky day, but dry enough for peat dust to be flying annoyingly in the wind as we continued across the Bleaklow moonscape. 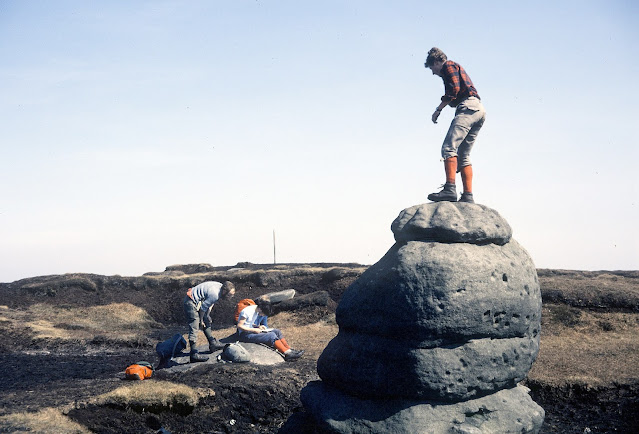 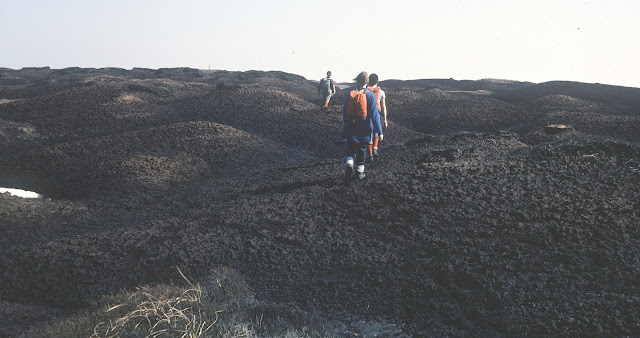 We continued under the blue sky, pausing more and more frequently for rests. On reflection, the dry conditions across Featherbed Moss probably saved us a lot of time.
Ian took this picture of the rest of us near Moscar. Apart from the boots, we are probably wearing much the same clothes as we would wear to the pub - apart perhaps from John's breeches. Karrimor 'Hot Air' type day sacks helped keep down the weight we were carrying. 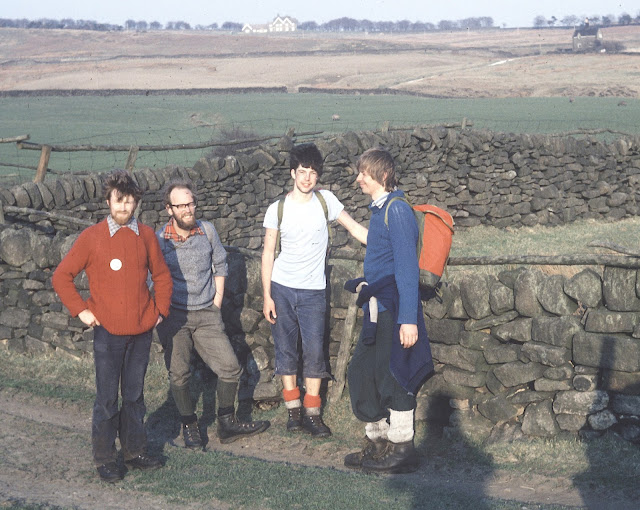 Finishing at the Yorkshire Bridge Inn soon after 20:00, was considered very satisfactory. 14 hours for the 40 mile circuit, starting and finishing in scarce daylight. It seemed to me very like a circular Lyke Wake Walk (a 40 mile walk across the Yorkshire Moors that I'd done many times).
Here's the route - arrows are at 1 km intervals. 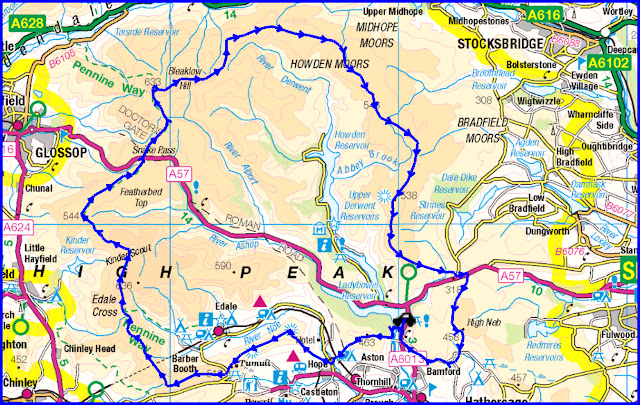 The Big Walks book shows it a bit better: 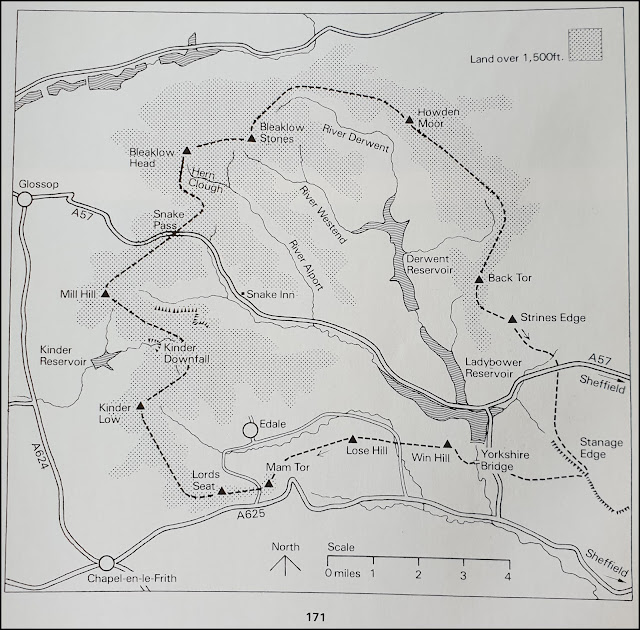 There follows the diary entry made (mostly by me) at the time, possibly just good for a chuckle from some of those present. Sadly, John, whose contribution to the diary entry was quite apposite: "Tussocks", passed away in December 2016. I'm sure the rest of us could still do this walk if so inclined, if not quite in 14 hours. 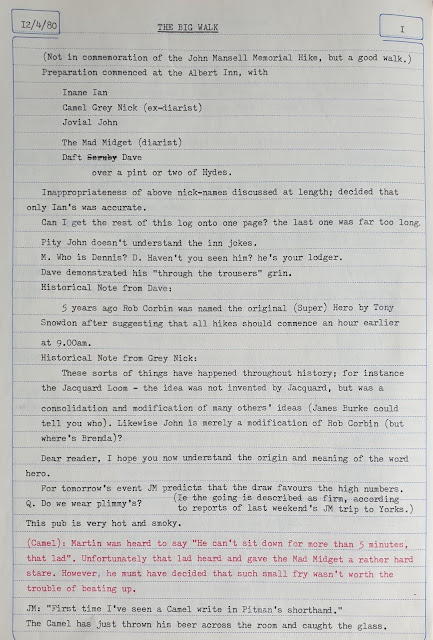 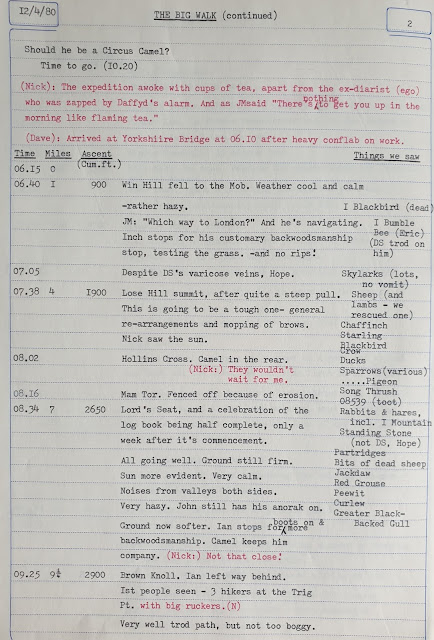 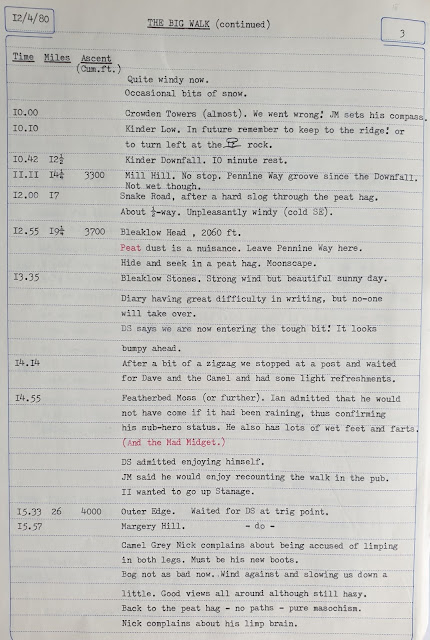 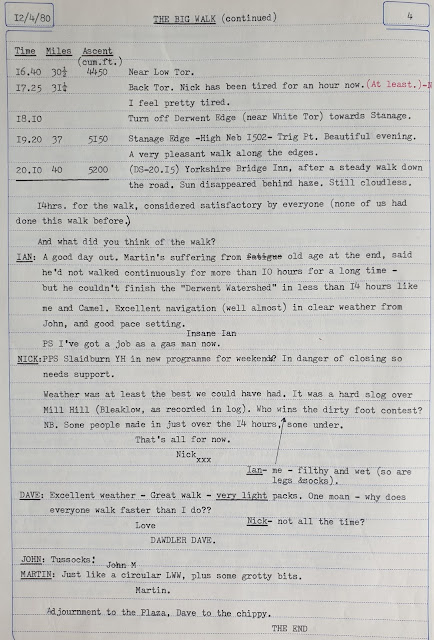 Happy Days! And many memories of the Plaza Cafe on Upper Brook Street, were many a chicken biryani sated the appetite.
Posted by Phreerunner at 15:15

I envy your record keeping. Somewhere I have a brief record of my effort taken from that book. It was back in the eighties and I walked the Shap to Ravenglass walk in 17 hours plus. When I arrived at Ravenglass I happened on a chap tending the garden of his guest house. His name was Roger Putnam and it turned out he had been at Oxford with my friend Gimmer who comments here. Roger asked me where I had walked from and after I had replied he said "Ah! My friend put that walk in the book and we wondered if it could be done in one day."

It was aSunday and there were no trains home and I stayed overnight at Roger's. I was accompanied by my Springer Spaniel Barney on the walk.

Just found my records. It was 1991. The guy who put the route in the book was Tom Price. It is all a longer story. I had previously failed on the first attempt but it's too long a tale to tell here.

I've noticed that my copy of the Big Walks book is the February 1981 impression, so the Derwent Watershed walk has obviously been an established 'Challenge' before the book was published. My copy of the book is well thumbed, but unlike many of my walking library, I have not defaced it with annotations. Many of the routes are familiar to me, though it's clear to me that these days the shorter routes are more likely to feel the tread of my shoes.
Quite often, I've split the walks into a backpacking trip - that was the case of the Ravenglass to Shap walk. 17 hours is very impressive.

Yes Conrad, I've replied to your message.
All good fun!

Here's Ian's recollection of the walk, and Dave says he is forgiven concerning the water...

"Hi Martin / everyone - I remember that day quite well - thank you for organising it!
It was a brilliant day out - I can remember the quiet early morning in the opening stages which I did in trainers, and then Johns unwavering navigation across Kinder and Bleaklow on a really dry day, Dave ran out of water around Margery hill and eyed me sipping mine (which I had carefully conserved) and I didn’t give him any .. hope I am forgiven by now ! And the pint in the Yorkshire bridge at the end at 8pm.
I did it another 3 times in the High Peak Marathon (at least the the first time with John in our team) , but this was the most pleasant circuit. The HPM was a bit like the Bogle Stroll involving a degree of masochism ..
Ian"