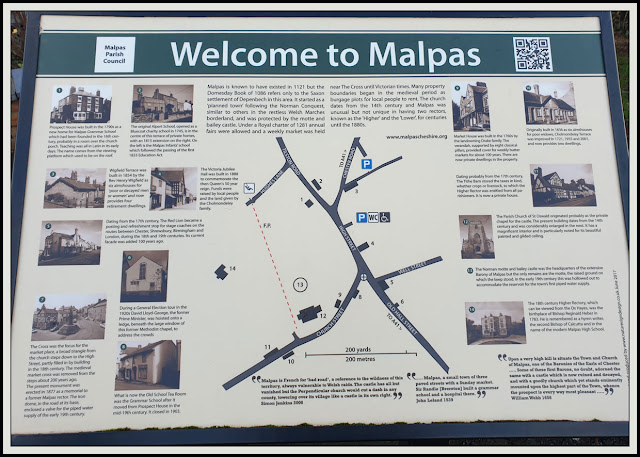 Sue and I popped down to Malpas to check out a route for Jen - from her 'West Cheshire and Wirral' book. We parked in the Malpas Training Ground car park that we found before the car park in the centre recommended by Jen. The Post Office was easy enough to locate, and we started from there after perusing the information board pictured above. Click on the image for a readable version and slideshow access.

We were soon heading out of the village, past a new housing estate where 42 properties are being squeezed in, then past the cemetery. 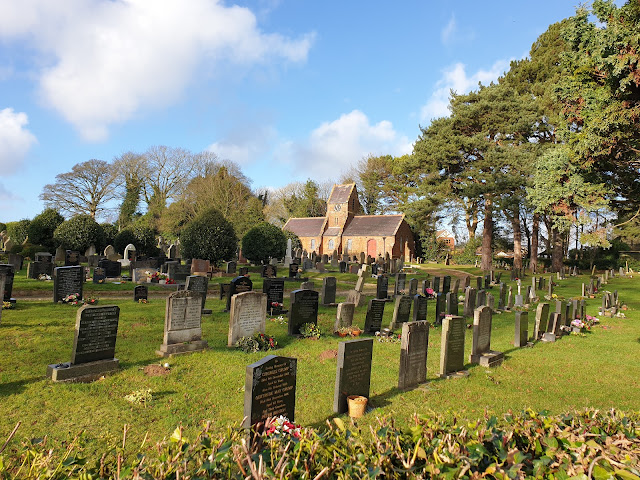 This is deep Cheshire's farming country. We were soon on a byway next to a field of stubble. 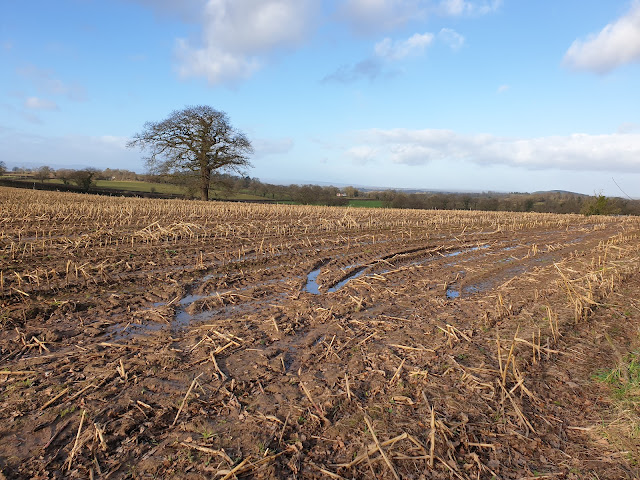 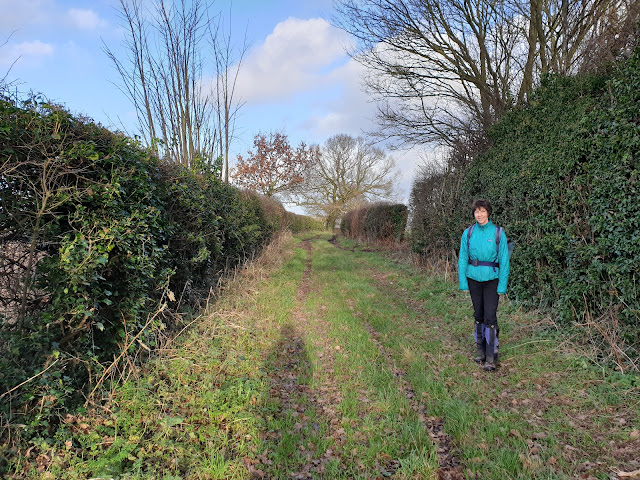 The byway (on which vehicles are allowed, in contrast to a bridleway) continued to the end of the long field pictured below, before a left turn along an enclosed footpath, eventually emerging onto Tilston Road. 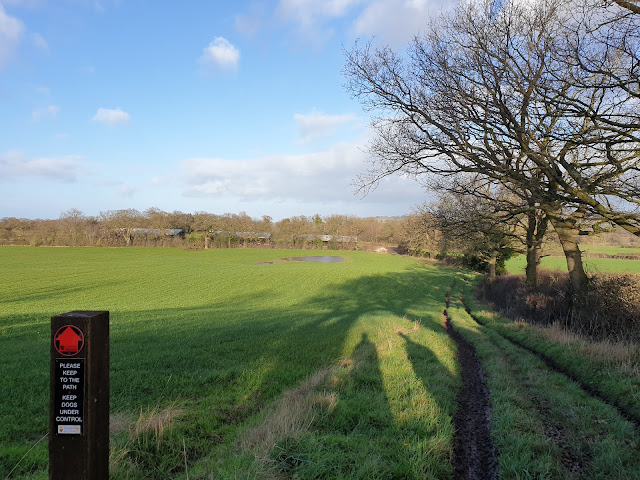 There were curious cows in the barn pictured above and below.

The low sun cast long shadows on this fine day. 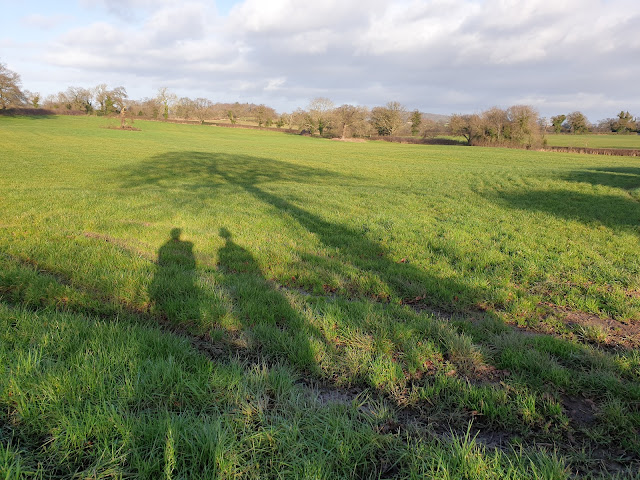 The path alongside Overton Scar sported fine views towards the Welsh hills. On a fine day, the Berwyns are visible from here.

At the end of the scar we reached a track next to some caves that have been scoured out of the sandstone cliffs. 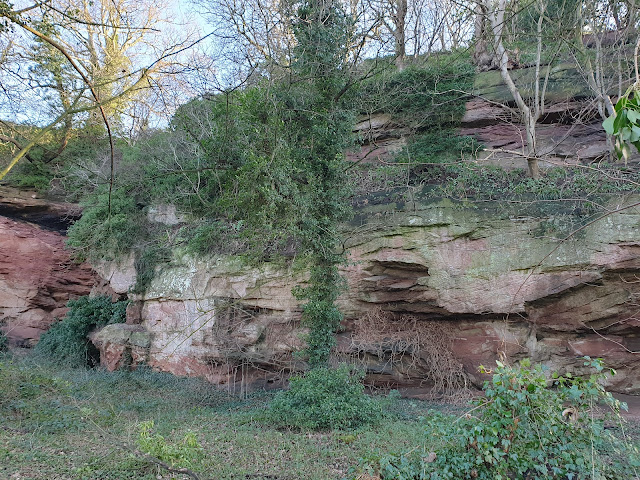 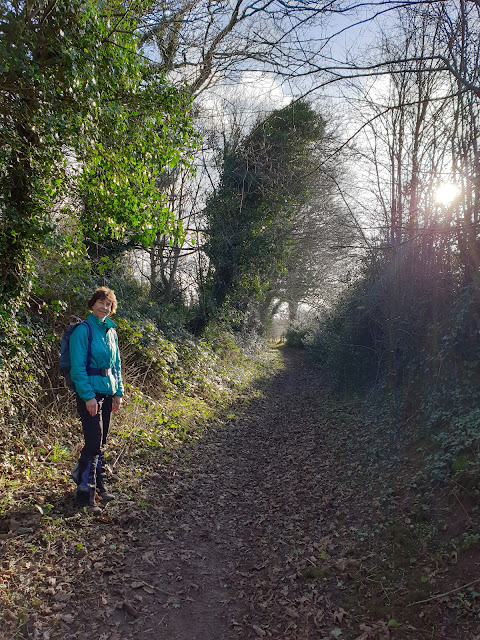 A footpath sign and a stile indicated that we were on both the Bishop Bennet Way, a 55 km route from Beeston to Wirswall, and the Marches' Way, a 351 km route from Chester, through the Welsh Marches, to Cardiff. 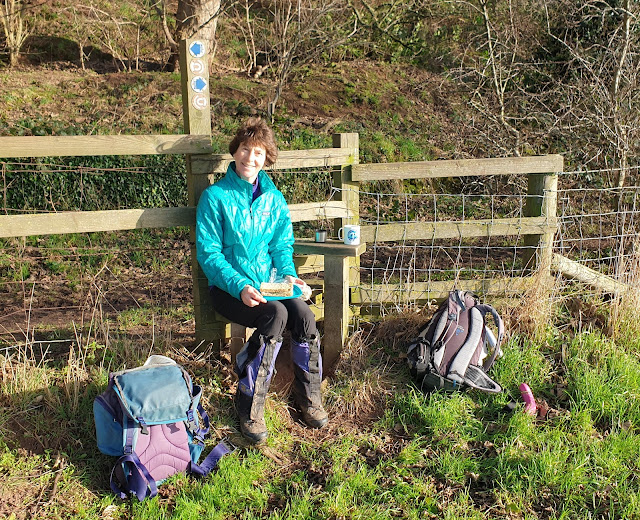 After lunch at the stile, we passed Overton Hall, where this specimen of hogweed was happily in flower. 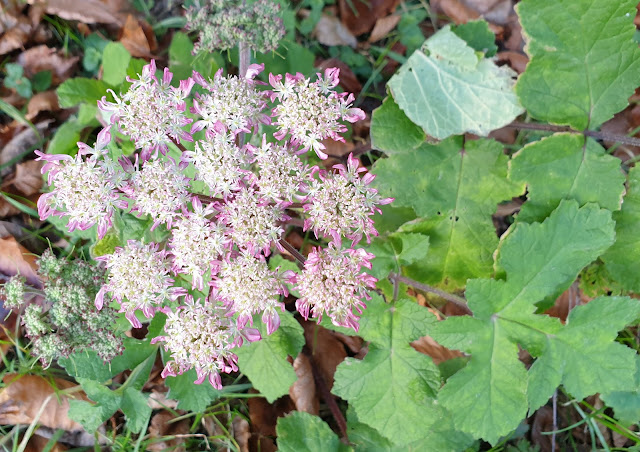 We encountered just one person away from the village - a runner who crept into the first of two 'signpost snaps'. 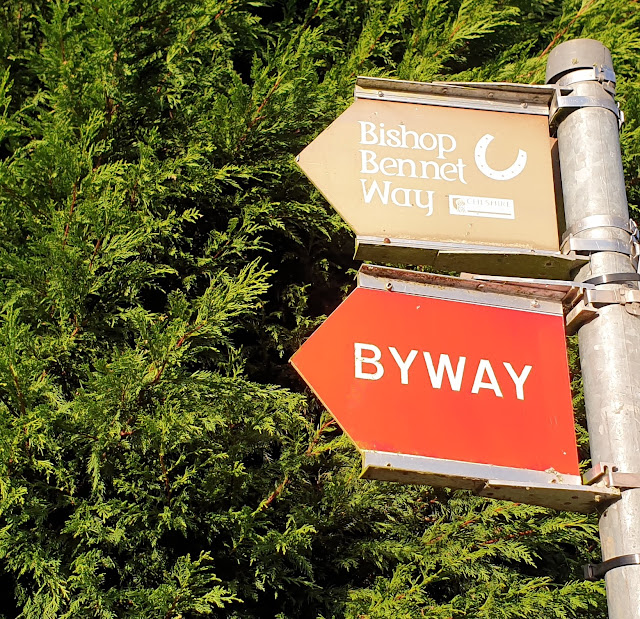 Metal kissing gates led us across fields towards the village of Malpas. 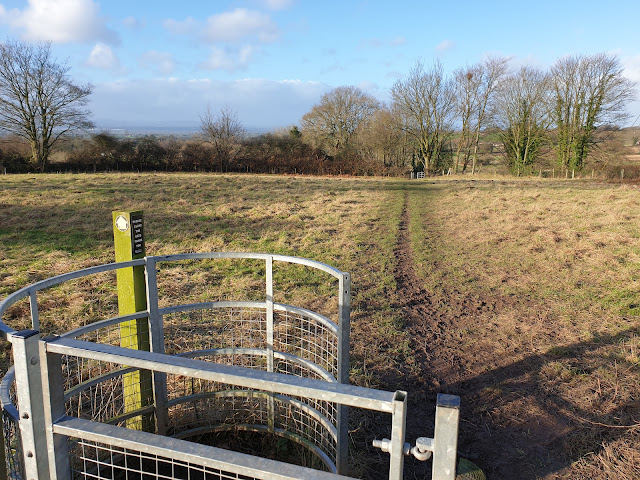 We entered a final field, where a large sycamore tree is at the end of a row of twelve such trees, symbolising the twelve apostles. When one dies the local people ensure that it's replaced. 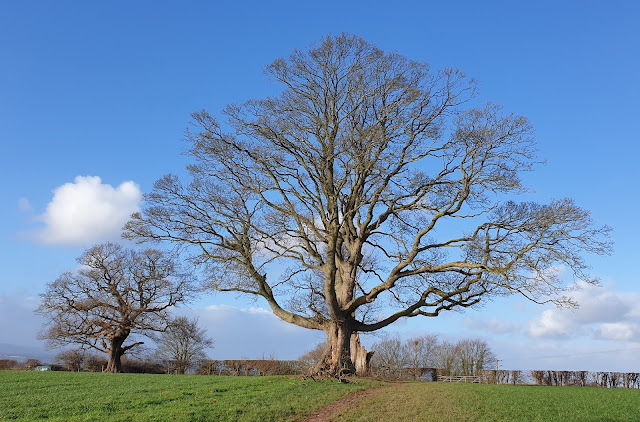 Before taking the next picture from the other end of the row of trees, we chatted for a while with a retired geologist who waxed lyrical about the village and its splendid views across to mid Wales and the Shropshire volcanoes. 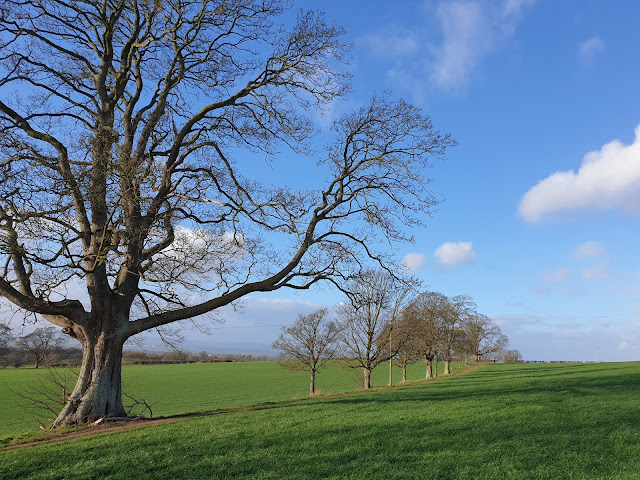 A wrecked wooden kissing gate led to St Oswald's church - an impressive place for a small village. It dates from the 14th century. 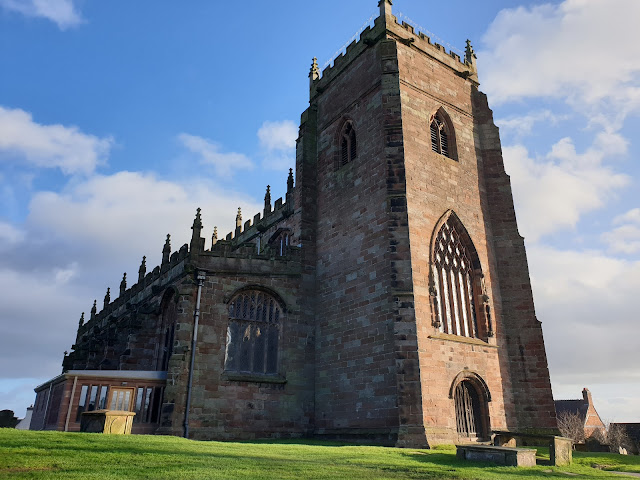 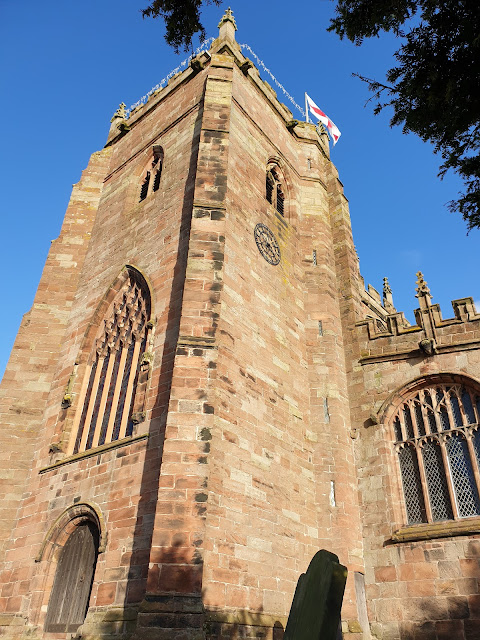 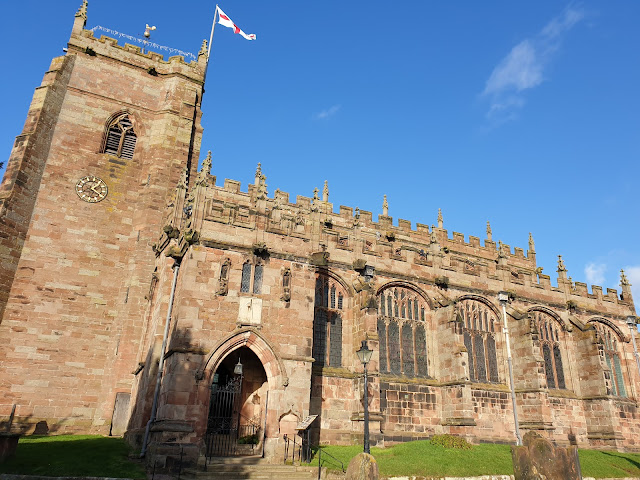 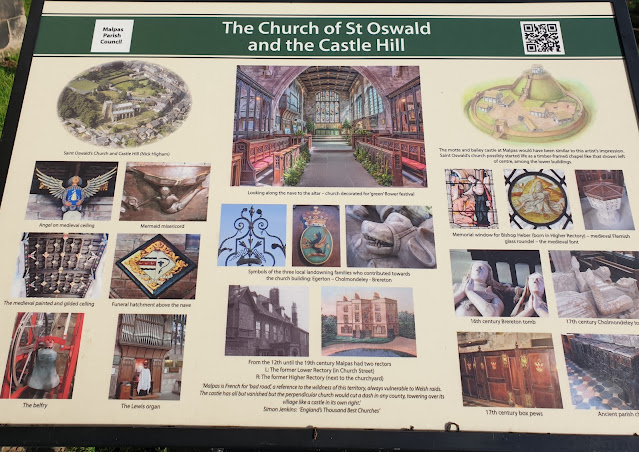 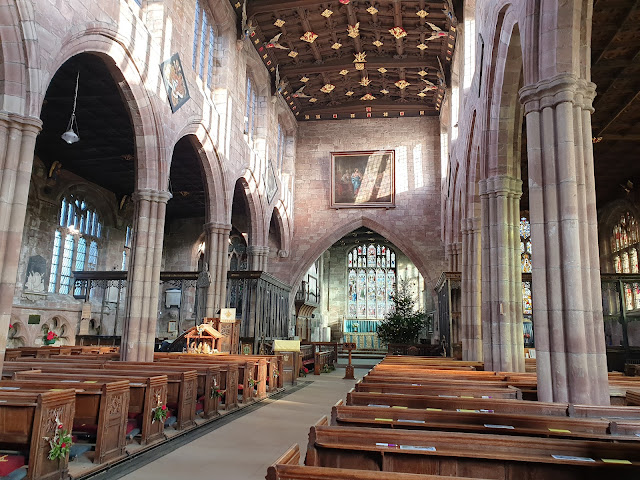 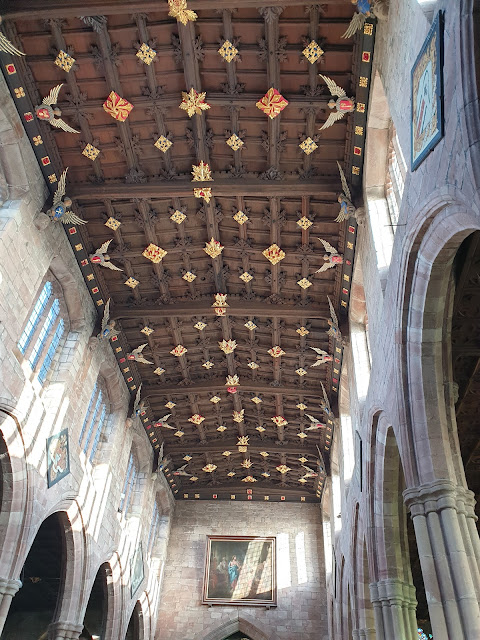 Next to the church, Market House is fronted by a colonnade of eight Tuscan pillars. This building dates from 1762, when the Drake family built it as a shop with living quarters above. 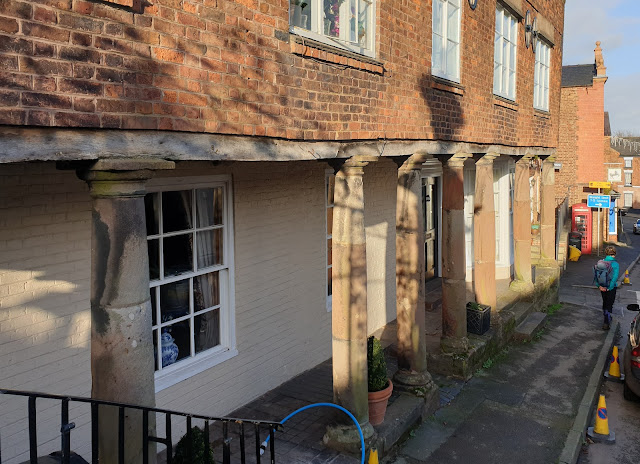 The market cross, apart from the medieval sandstone steps, is a relatively recent replacement, erected as a memorial to the rector from 1840 to 1873. 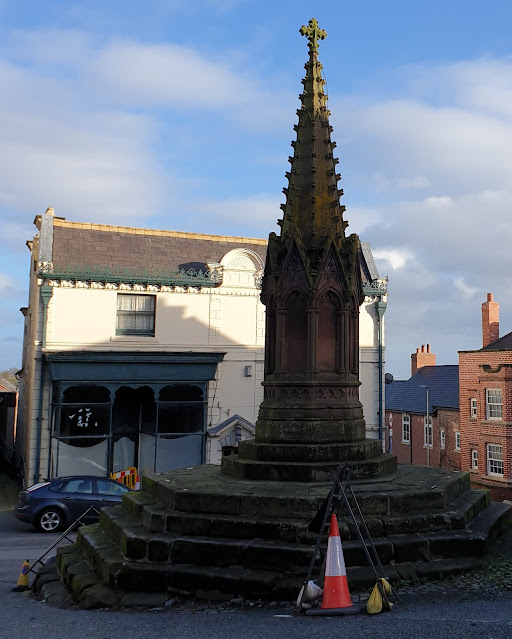 The village is littered with pretty old buildings. We passed some of them on our way back to the car park. 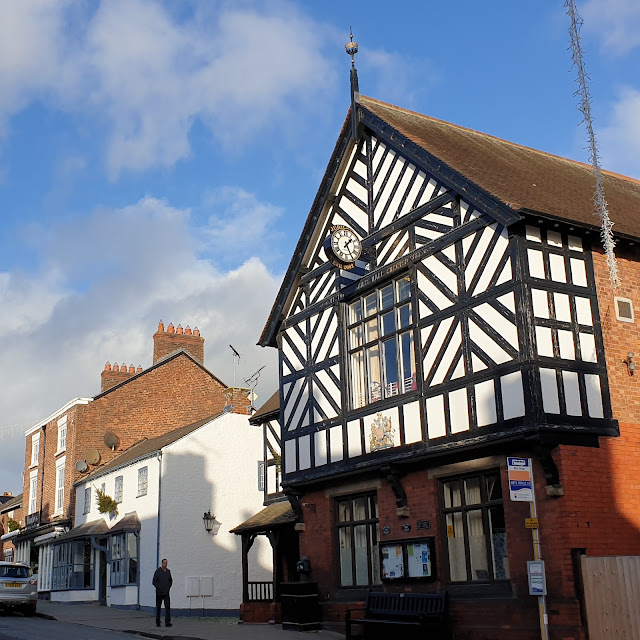 Here's our route - 8.5km with about 140 metres ascent. It took us a little over two hours. 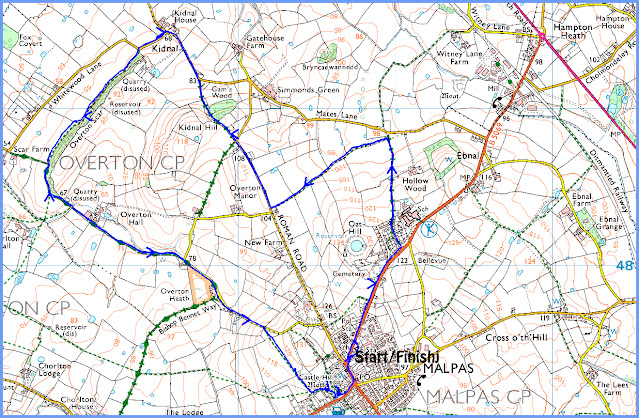 That's it. Very few 'edits' to Jen's description are required.
Posted by Phreerunner at 14:29

Looks a good walk with interesting content rather than featureless trogs round the edge of crop fields.

Yes Conrad, and I remember the nearby Sandstone Trail finishing with some of that field boundary walking.