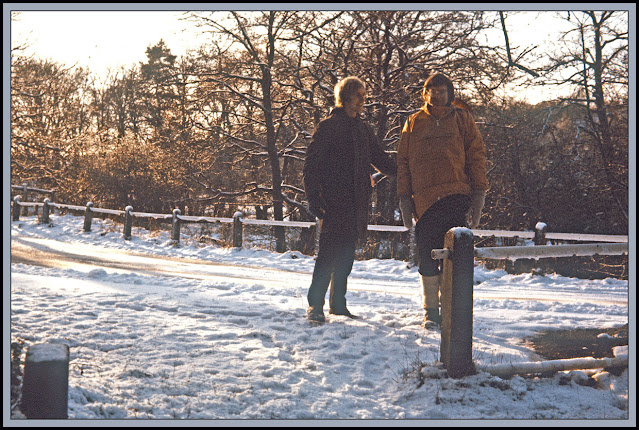 My '1977 slide scanning project' involves scanning some 150 slides that will be reproduced here in four postings. There's also a European Road Trip during which a further 267 pictures were taken. Of these I have found just 50, so I'll be scanning those. The rest must be somewhere; maybe I'll come across them some day, but hopefully the 'best 50' will do for the purposes of this exercise.

There are no diary entries for this period, so I'm relying on the slide captions, correspondence, walks programmes, and memories, which after 45 years may be a bit suspect. I'll circulate the links to the 10-20 people who appear and with whom I'm still in contact. Any extra information from them will be welcome. Sadly, some of the participants are no longer with us.

I suspect that 1977 started in Staithes, where a friend of Roger's had a tumbledown cottage that we used to stay in. I remember using a sleeping bag on an upper floor, and waking to snow falling through a hole in the roof. We may have spent New Year's Day in Staithes, as the first picture of the year, above - featuring Roger Freeman and John Clark, is captioned 'Jan 2 - early am near Goathland'.

We must have gone for a walk around Beck Hole, before driving to Northumberland. 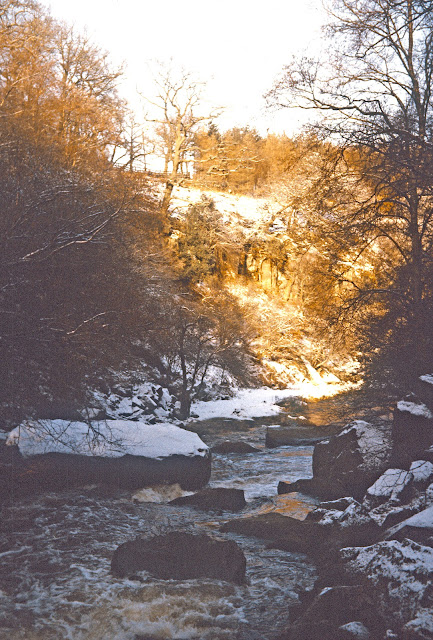 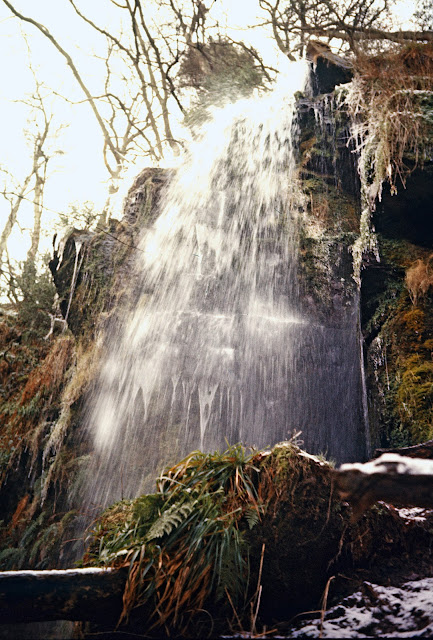 A view across to the North Yorkshire railway 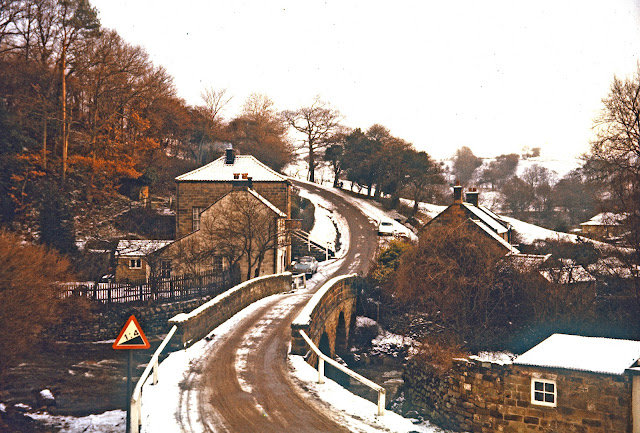 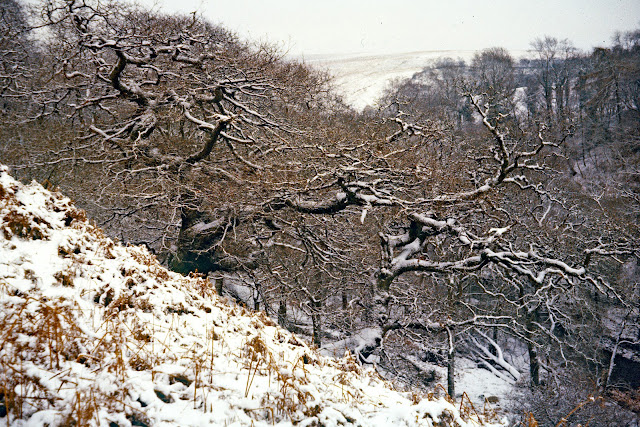 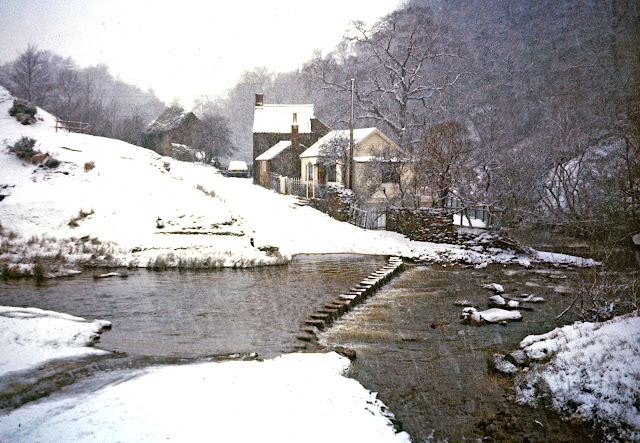 A winter scene near Goathland
On 3 January the following pictures were taken near Hexham. 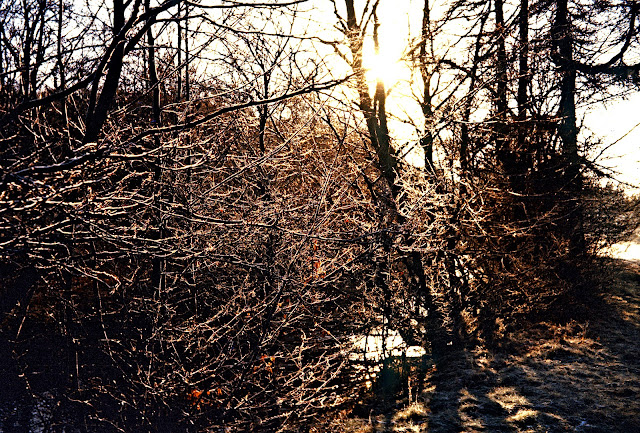 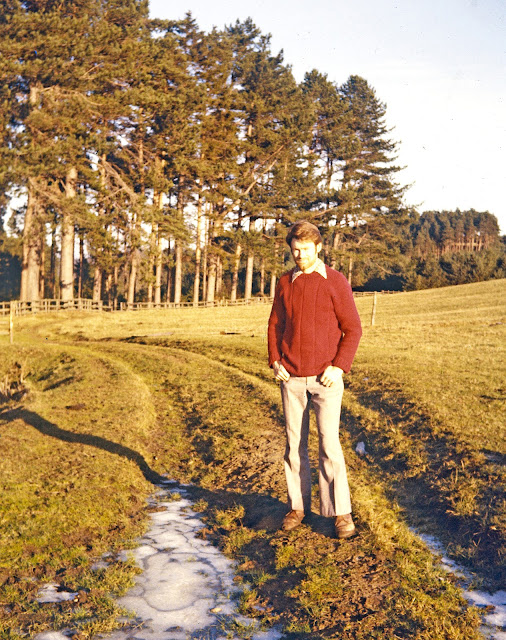 There's a gap in photos to 13 March, when Bob Selig and John Howarth joined me for a walk up Snowdon. Just one photo (below) records the event. Meanwhile, in February, I acquired 'Bluebell' a Ford Capri 1.6 GT, and did the 55 mile Bogle Stroll in a shade over 10 hours. The whole team of 10 finished, in superb weather and average time of 12:15. We may only have come third, though. Around this time, Roger bought his friend's cottage in Staithes for £2000, and we went there for a weekend. 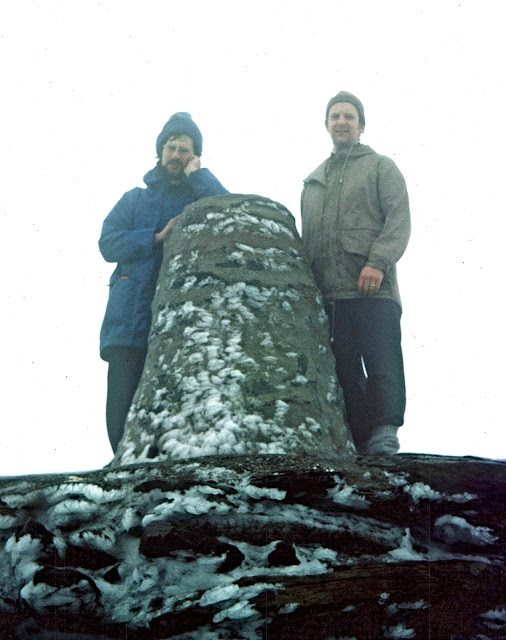 Soon after this, John (a colleague at Thornton Baker) moved to Leicester to work for one of the country's leading tax experts, and with a young family as well, we saw him rather less often.
On 19 March, a trip to the Yorkshire Dales found us in rain above Kettlewell. 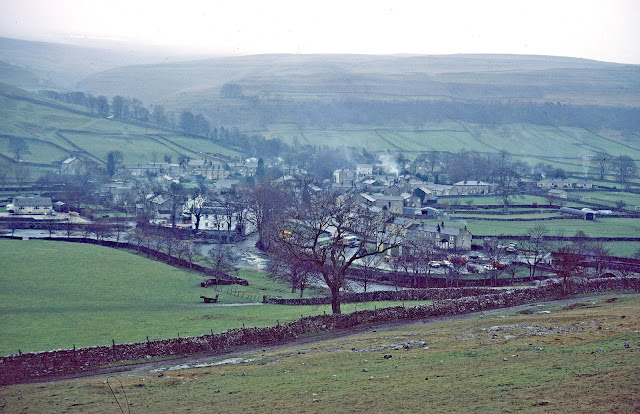 The rain didn't really bother us, as we went caving. From L-R: Brenda, Rob Corbin, John Mansell and two who I don't recognise. (Mike Brown in the red - thanks Dave.) 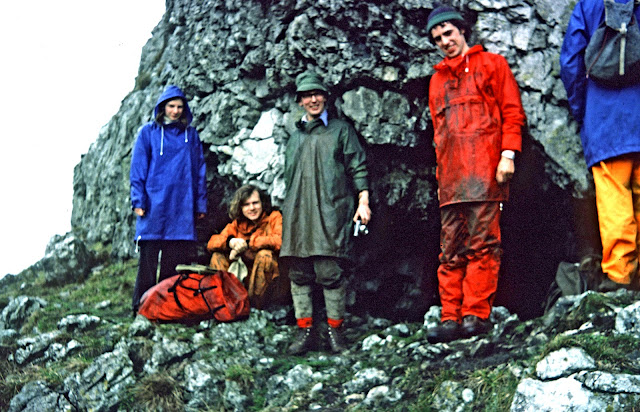 The only picture from 3 April shows a group above Patterdale, 'attempting' to ascend Helvellyn, from which caption I gather that we must have turned back before reaching the summit. 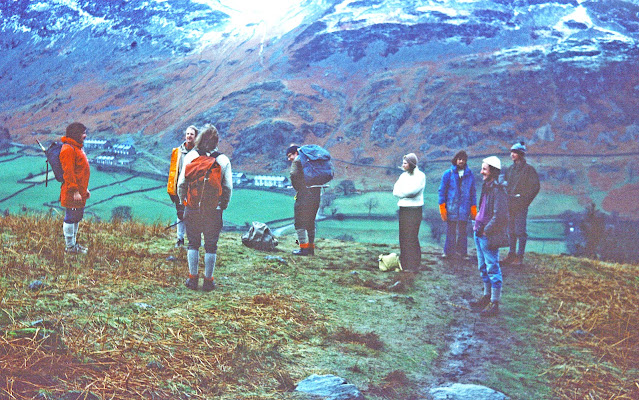 From L-R: Laurie Marshall (RIP), John Howarth (RIP), Rob Corbin, Johm Mansell (RIP),
Brenda, Bob Selig, Dave Sims and Dave Scruby
The next trip - 9 to 11 April, brings this phase of the Compendium to a close by way of a visit to the Isle of Mull. We had several trips there in the 1970s. 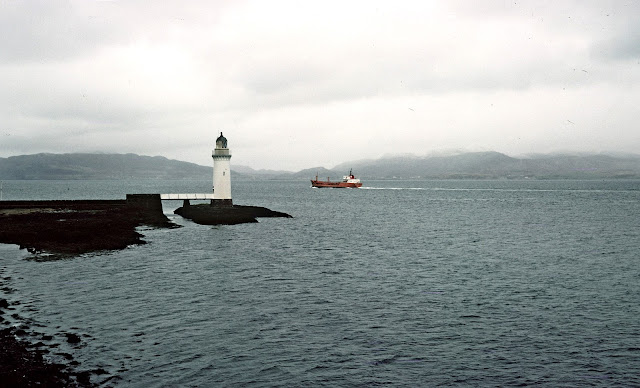 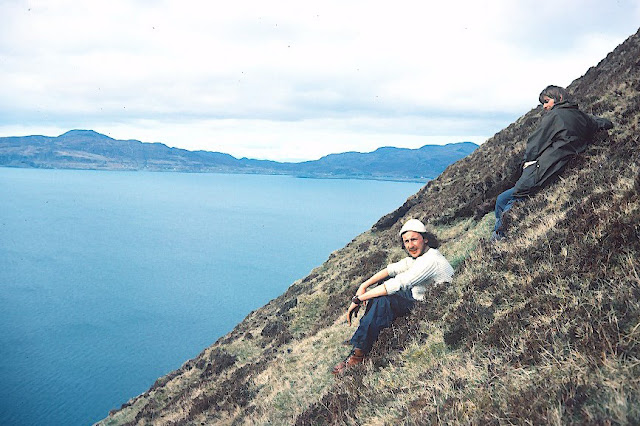 Dave Sims and Dave Scruby, on a steep slope with a view to Ardnamurchan 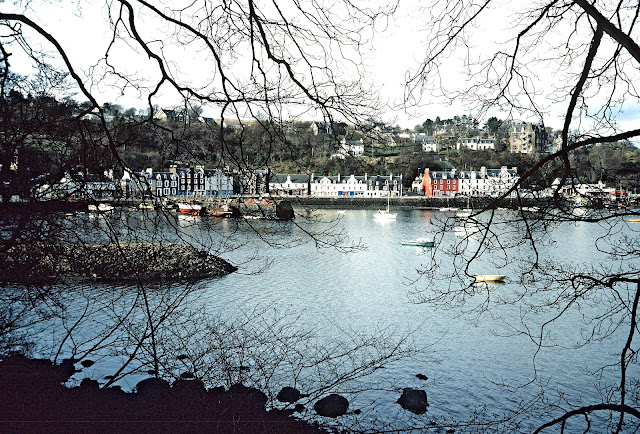 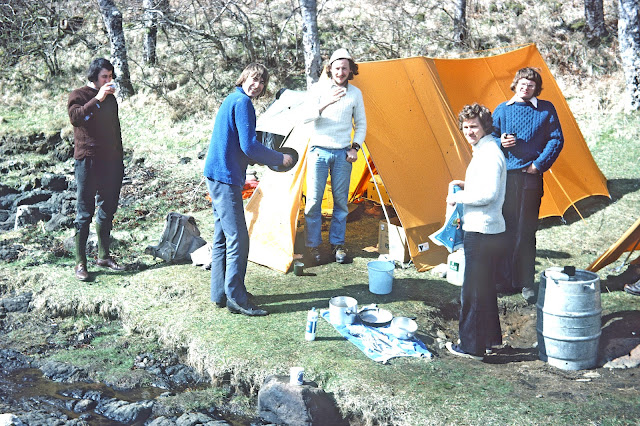 Breakfast at camp, with Lofty, two Daves, Rodney? and Roger
[I think that's Lofty, part of our Bogle Stroll team, but I may be mistaken. As for Rodney, was he Roger's friend who drove around in a Morris 1000 Traveller with a corrugated iron roof?] 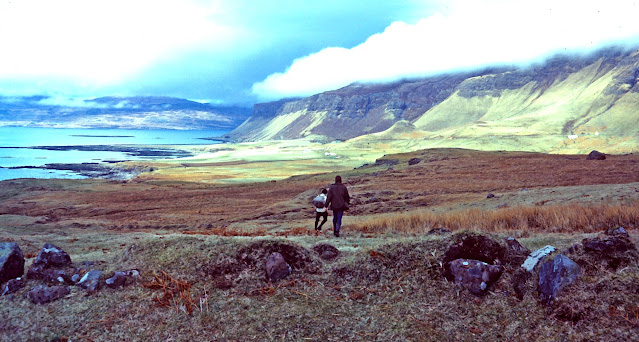 A walk at Treshnish 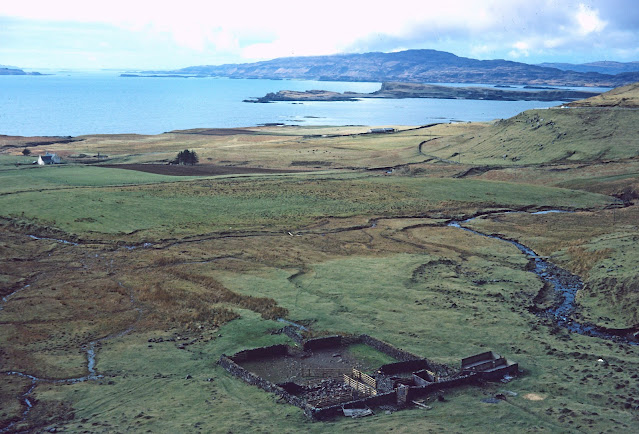 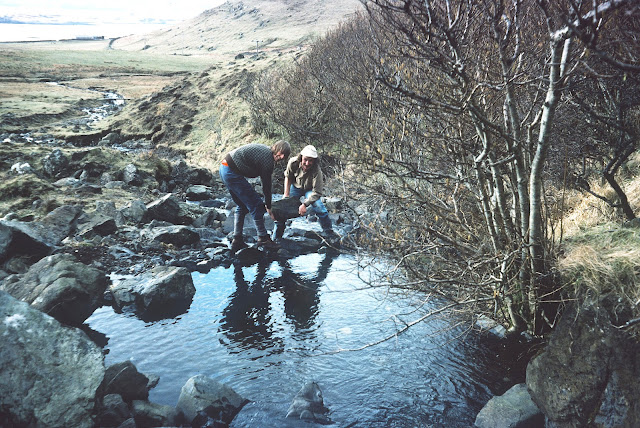 Dam of the week 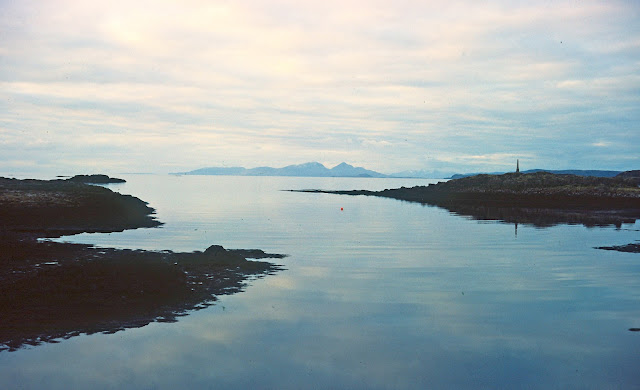 View to the outer isles (Rhum, as it was then known) 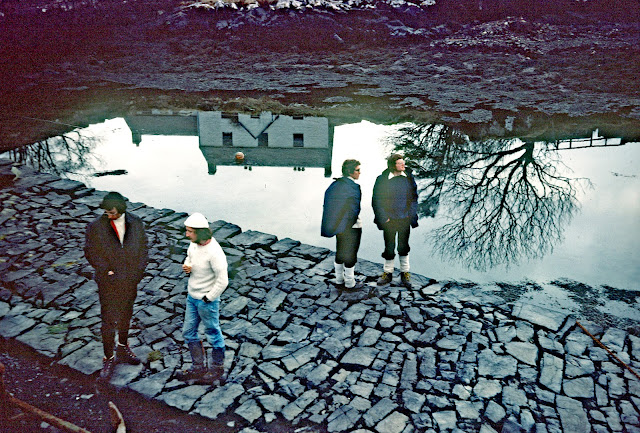 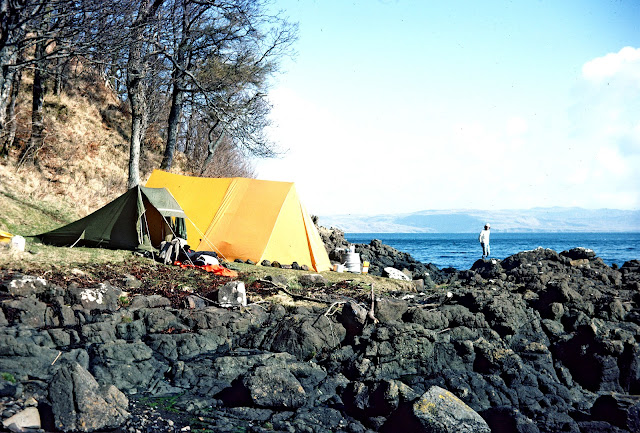 Our campsite, on a grassy patch just outside Tobermory by the high tide mark 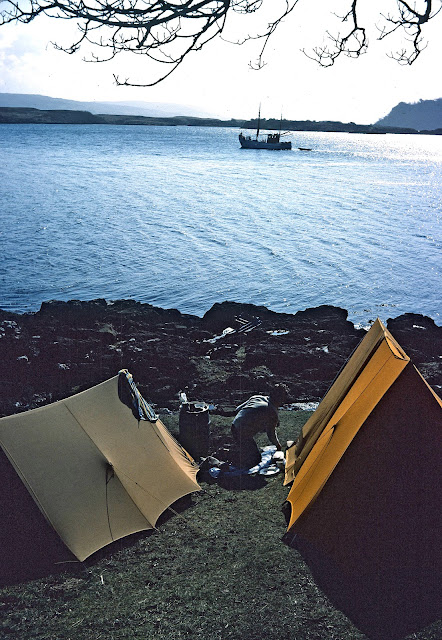 A view to the Sound of Mull 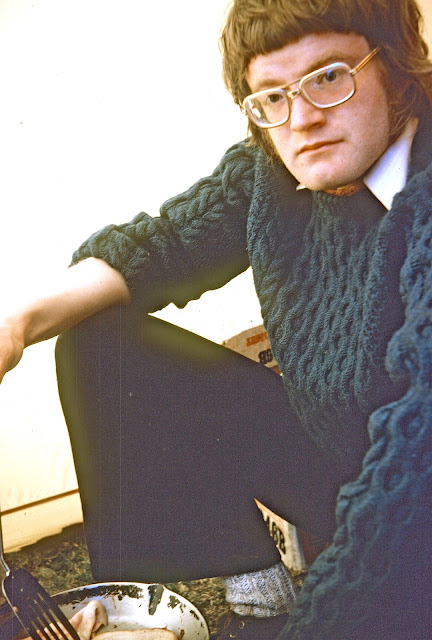 Roger cooks breakfast
Dot may recognise her old frying pan, which served me well for years, until I inadvertently left it in a holiday cottage in Scotland in the late 1990s. 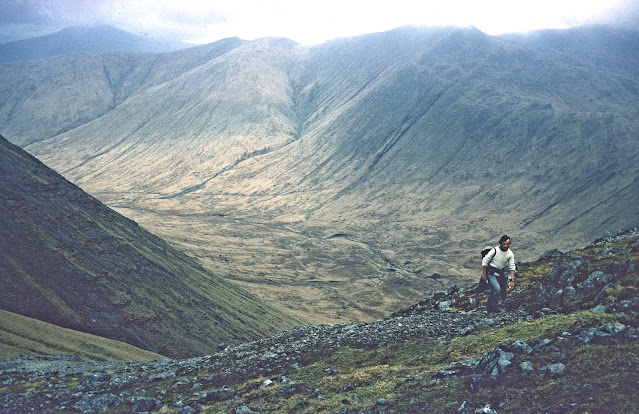 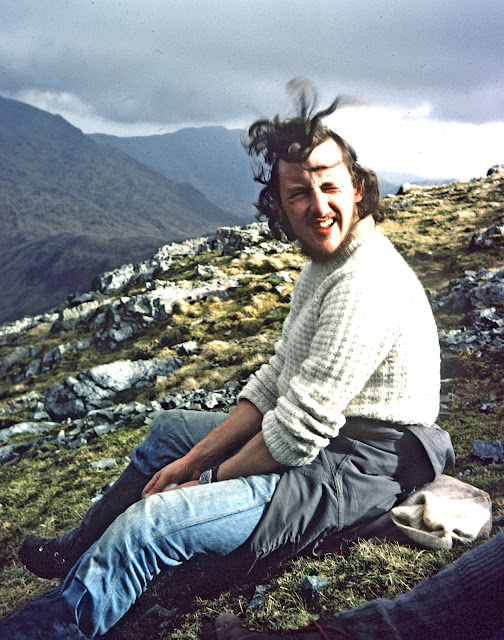 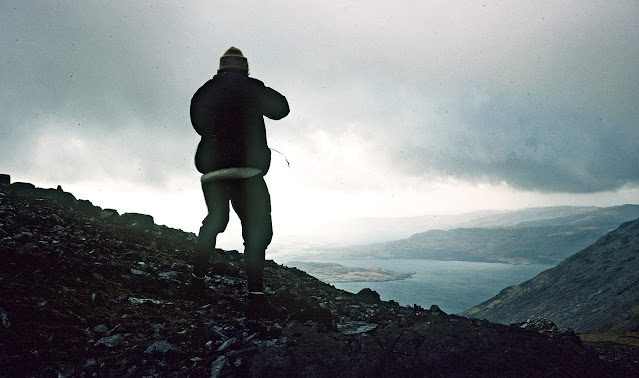 Rodney on Ben More, at the col
Posted by Phreerunner at 22:24

All good stuff. I reckon that scanning exercise is demanding and seemingly endless. I sent all my slides off to a firm called Revive who did it for me - worth every penny of the not too unreasonable cost - just over 1000 slides. But then you have had the pleasure of revisiting old memories as go along.

Yes, Conrad, the scanning can be a little tedious, and I'm unlikely to get through all the slides. I also have several boxes of negatives and prints. I do however mostly enjoy the process, so I'll carry on for the time being, when I can find the time and enjoy TMS cricket at the same time. At least I'm now getting value out of the scanner that works very well despite being nearly 20 years old.

Hi Martin
Always find these old photos fascinating
In the photo with two people you didn't recognise I believe the person in the red cagoule was Mike Brown. He is the one who had use of his father's long wheel base landrover which did for several trips
Dave Scruby

Of course, I should have remembered Mike Brown and his Land Rover. I wonder where he is now?