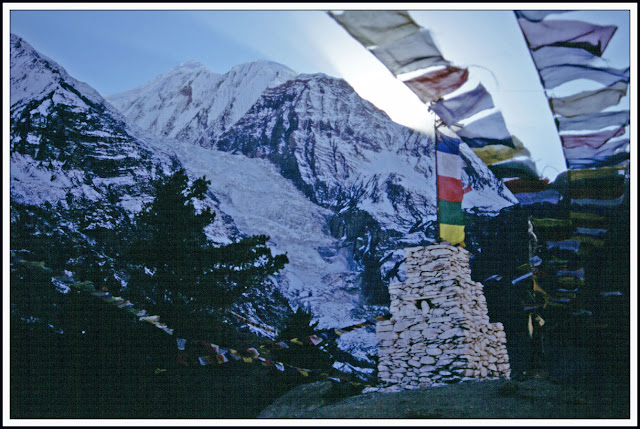 Wednesday 10 November
Manang to Yak Kharka
Itinerary: DAY 10 Yak Kharka (4,090m) Continuing west we move to Tengi (3,642m). From here we branch away from the and go towards the north following a trail above the east bank of the Jhargeng Khola to Yak Kharka. The surrounding area is used for grazing yaks. There are also chances of seeing herds of "blue sheep". In the afternoon we will go for an excursion in search of wildlife. (3 - 4 hours walk).

[Diarist: Sue]
On the trail again, so up at 6 am. Away from Manang after porridge, toast and omelette. It was cool in the shade of the buildings. Looking back, Manang sat on a promontory, flags flapping and smoke rising from chimneys, giving the valley a hazy appearance. 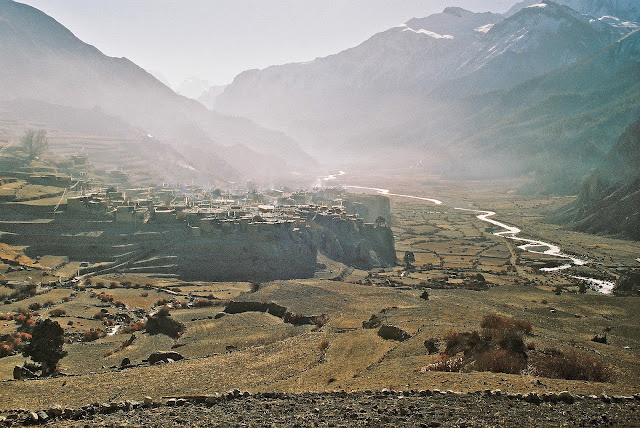 Looking back to Manang

The river snakes across the bottom of the valley, a silver ribbon. Yet again the sky is cloudless. Soon, a large white chorten adorned with flags signifies the entrance to the . The path climbs steadily but gently today. We cross frozen streams. There are no trees now, just scrub. 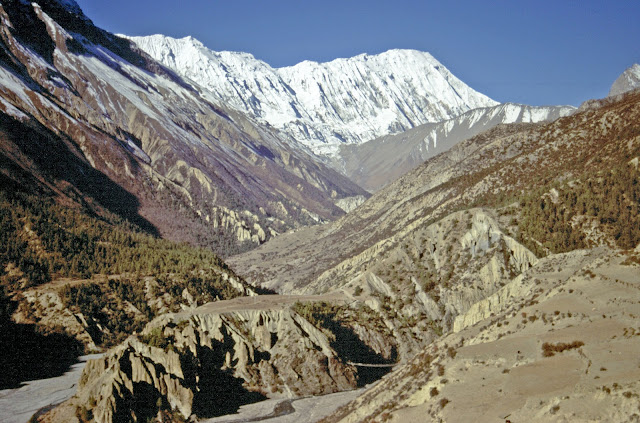 The view ahead to Annapurna 1 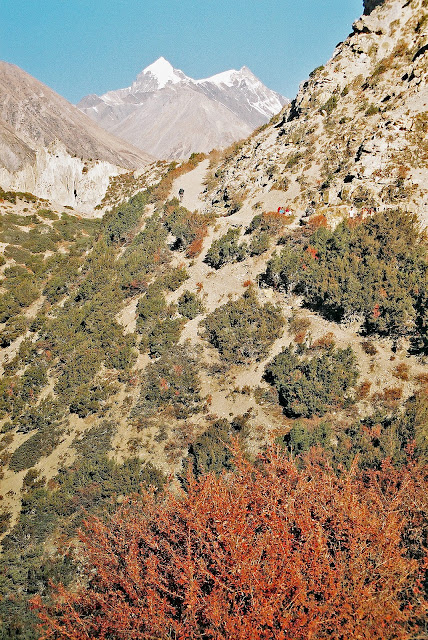 Andrew on the trail

There is a stream of people on the trail, some of whom are carrying large packs. Today we left the Marsyangdi, which headed up-valley to our left. We took the right fork. Behind, the views of Annapurna III and Gangapurna dominated.

Our lemon tea stop was at the settlement of Gunsang. Just before this, we watched 4-5 partridge-like birds, pecking in the dust. The terrace enjoyed a panoramic view of Annapurna III and Gangapurna, seeming only a short distance away. Here, Martin's gloves did a disappearing act, only to reappear after a thorough search, under his hat! 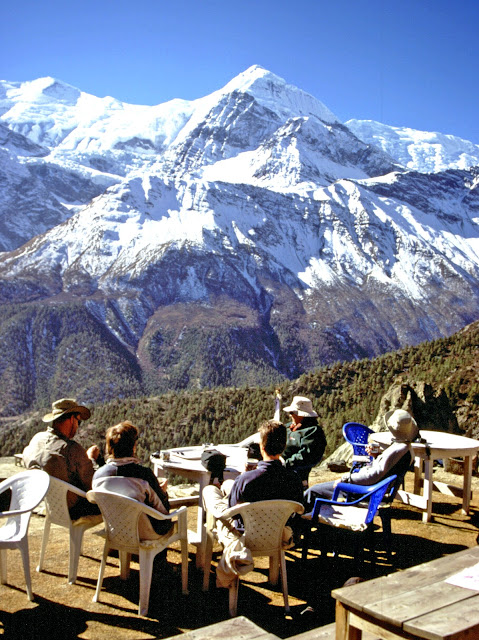 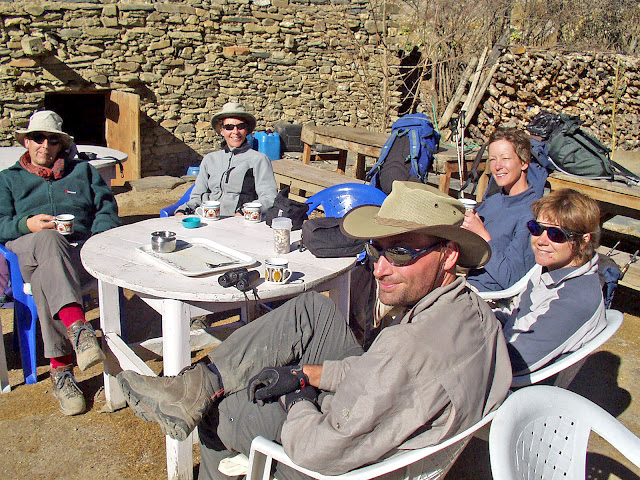 The valley is steep, but the path is 'Nepalese level' after tea. Chulu West is seen on our right, as we pass another long mani wall. 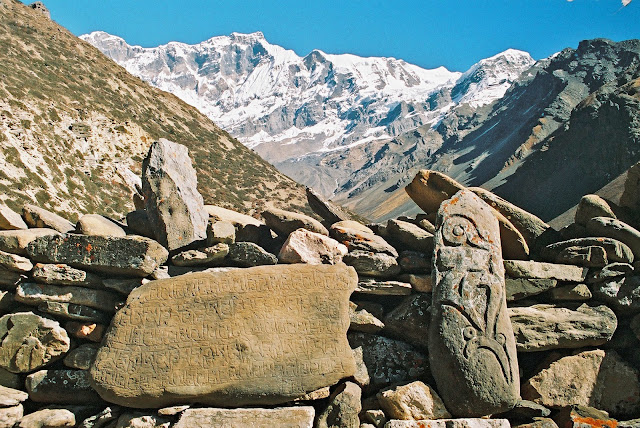 This area has blue sheep, which are neither blue nor sheep, and we may have seen some on a ridge above us. Probably not, they are uncommon and shy. At the same time, two lammergeiers flew above. 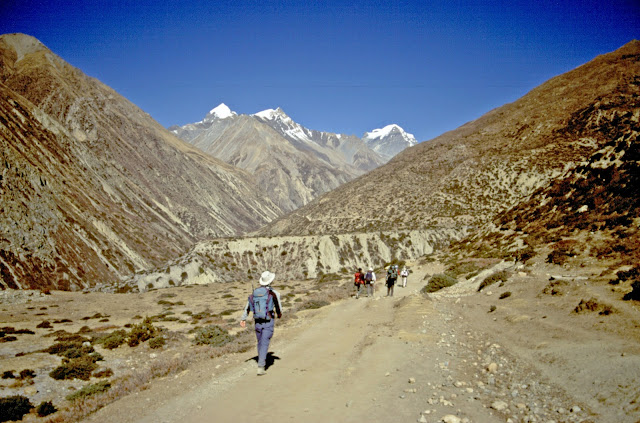 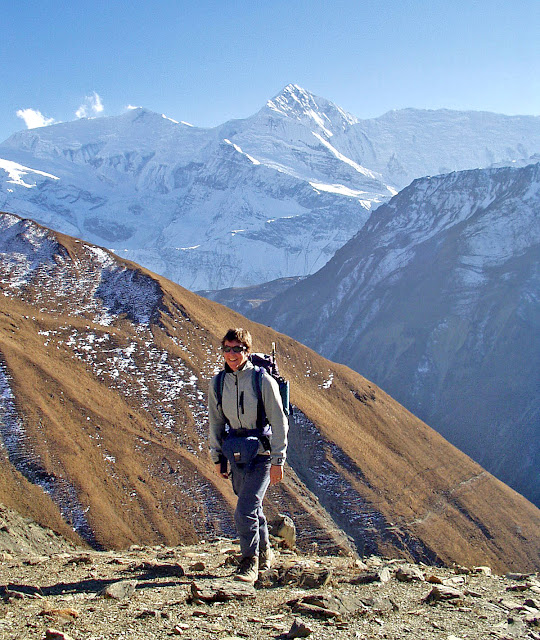 Our half day walk ends at Yak Kharka, another settlement which is abandoned at the start of winter, possibly for the last permanent village, Manang. It comprises a couple of tea houses. Despite a thermometer reading of 20C and sunshine, there is considerable wind chill and down jackets are required as we sit around, while tents are pitched and lunch is prepared. We want to assist, but know it would embarrass the sherpas. There are 29 people looking after the 6 of us, including 19 porters. This camp is at 4030 metres. 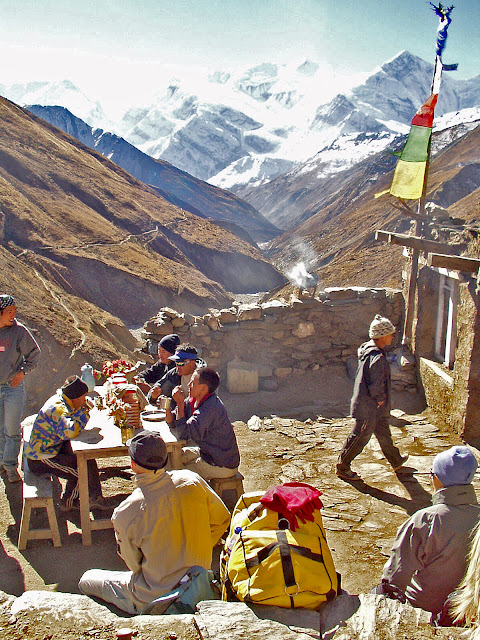 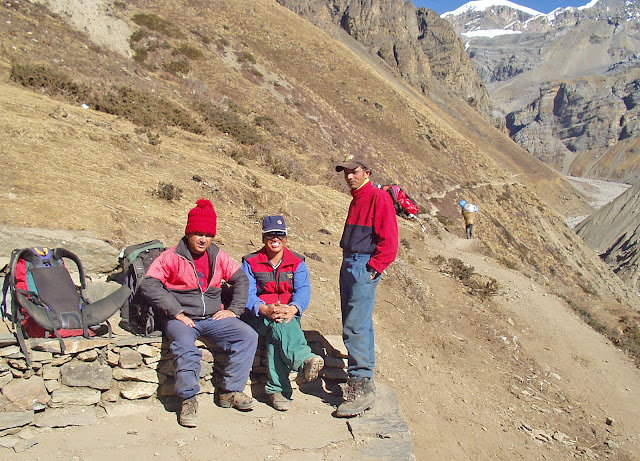 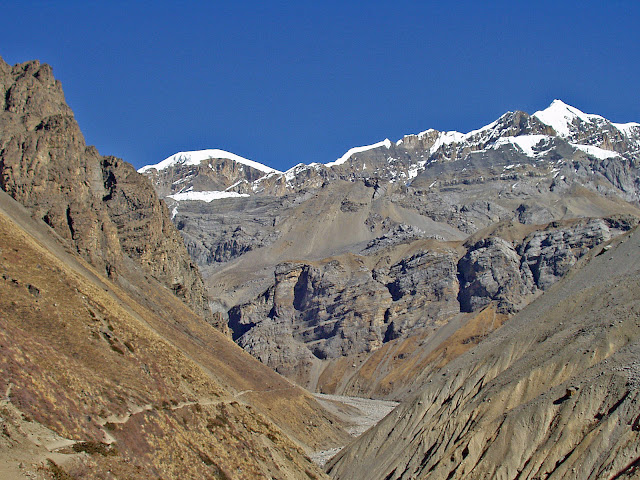 A view from Kharka

We eat lunch inside a wooden building. It appears to have 'double glazing', ie two sets of windows about a foot apart, but for most there is only glass in the outer ones! It is warmer inside the sunlit tents where we have some chill out time from 1:30 to 2:30.

An acclimatisation walk followed. A steep slope rose directly behind the camp in a dusty zigzag. It wasn't long before our tents were in the shadow of the mountain across the river, but we remained in sun until the descent. A slow plod was all we could manage, breathing heavily.

A bird of prey (lammergeier) flew just below us, pretty close, gliding on the wind. Yaks were seen on the hillside, their shapes unmistakable. We reached a height of 4500 metres. From here, I, one of the 8000 metre peaks, was visible. A few blue sheep could be seen through binoculars, including one with magnificent horns. We ate Mary's ginger, chocolate coated, sweets, then headed down through the dust and scrub.

Arrived back in camp at 4:30, to find naks (female yaks) grazing near the tents. Washing water arrived at 5:00 and tea was served at 5:30, inside the dining room of the teahouse again. Lindy, Mark, Martin and I played rummy, whilst the others read. Dinner was at 7:00 - mushroom soup, then yak meat, noodles, vegetable fritters, and 'special potatoes' - mashed potato with tuna, cheese and herbs on top. Custard crumble cake for pudding. The table was really well lit with the gas fired Tilley lamp.

When our hot water bottles arrive soon after 8 pm, it is the cue for everyone to head for bed.

Next Day
Previous Day
Posted by Phreerunner at 10:00