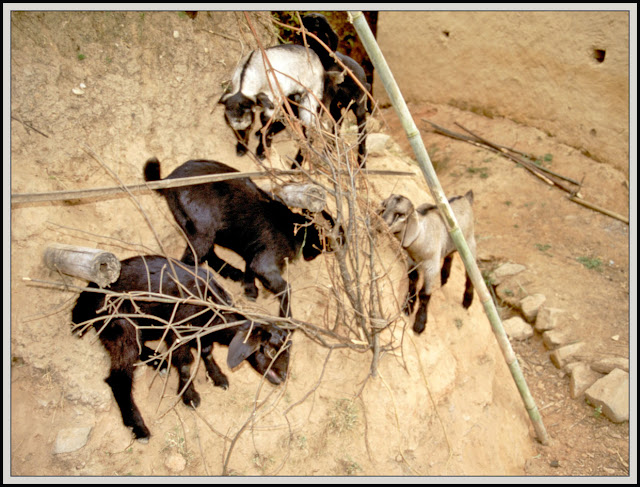 Tuesday 23 November
Nagarkot to Changunarayan and

[Diarist: Martin]
The hoped for 6 am wake-up knock did not occur - it was misty. Instead we had some Indian(?) children playing outside our room. It had been a comfortable night, the coolness of the room being enhanced by the welcome hot water bottles.

We all assembled for breakfast at 7 am. Mahesh was allowed to join us this time! Then we resumed our walk at 8 am in weak, hazy sunshine.

Down through a highly populated area with lots of goats, chickens, a few cattle, schoolchildren in pristine blue uniforms, sweetcorn drying high up on stands. 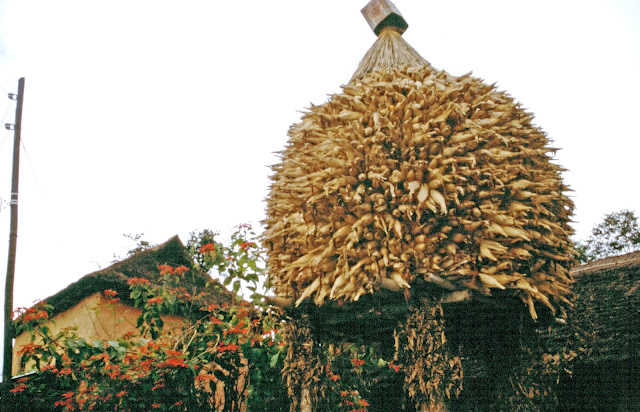 Past bamboo fences and small fires, women washing themselves and their clothes, friendly greetings from all. 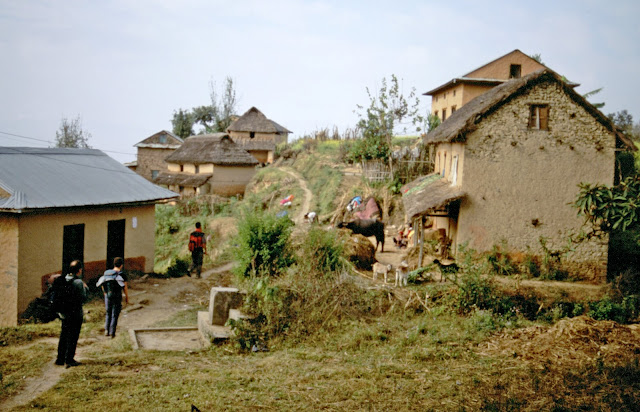 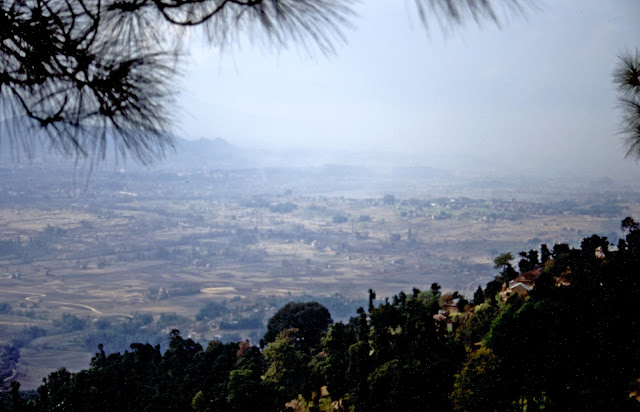 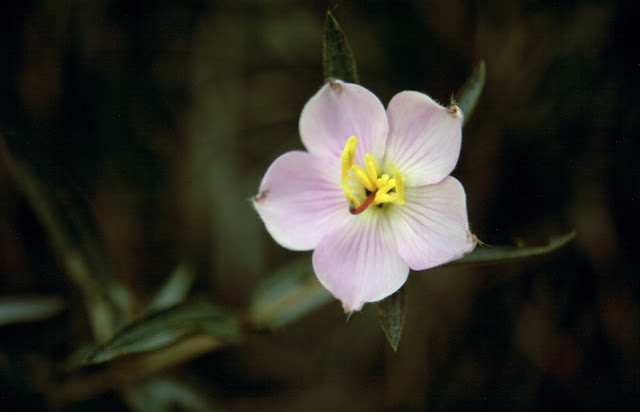 We passed, after a couple of hours, a small temple from which we descended 100 metres to around 1550 metres. There were small yellowish birds - smaller than yellowhammers but otherwise similar. 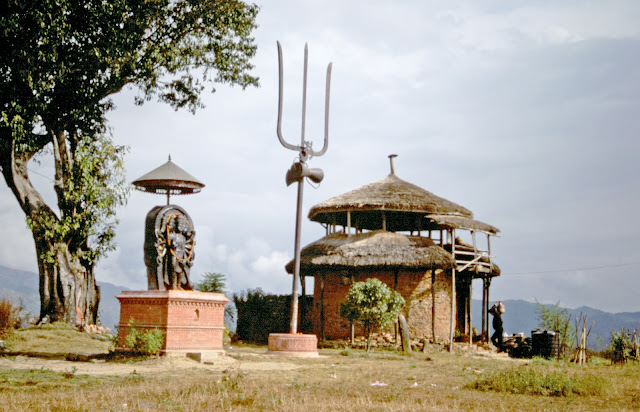 Then we rose again up the final part of the ridge which leads eventually to our terminus for the walk, the ancient pilgrimage site of Changunarayan. On the way we pass lots of army boys on a manoeuvre - strange to have loaded guns pointed at us. But friendly 'namaste' greetings. plans are set out on small plastic sheets, using toy vehicles and leaves and grass and model men. Mahesh has relatives and friends in both the army and the Gurkhas - the latter are a revered breed and are relatively very wealthy.

Misty views over green hills beyond steep multi-coloured terraces. A solid green hillside is opposite us to the south, and a nice little town lies below to the north, beside a river. The place is Sakhu and has an Alpine look to it, though the buildings are bound to be crumbling Nepalese. 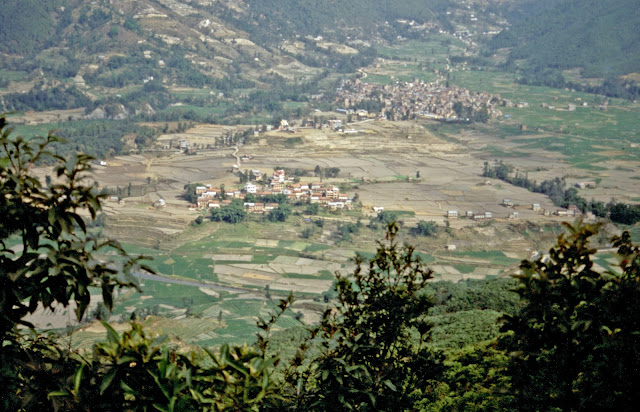 View to the Kathmandu Valley

We rest for a while above the army area; Mahesh has his lunch. Then the final half hour of our stroll down the ridge, past firs and aloes, and a magnificent swing constructed from four bamboo poles, lots more children and goats some with triplet kids. 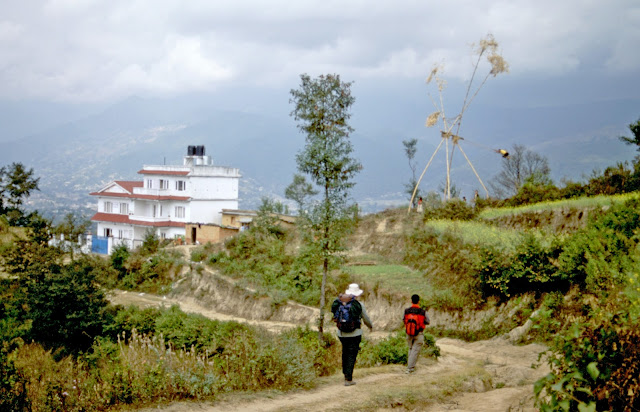 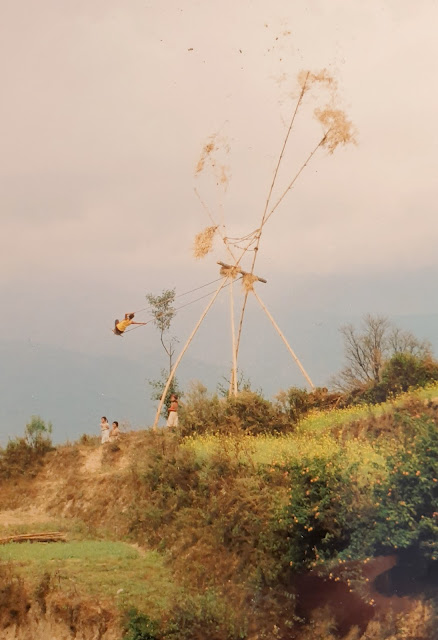 Lush vegetables, especially cabbages, on the last section of today's walk. Mahesh had not done this route before, but he was able to ask the way, and he was impressed by the temple at the end of the walk. 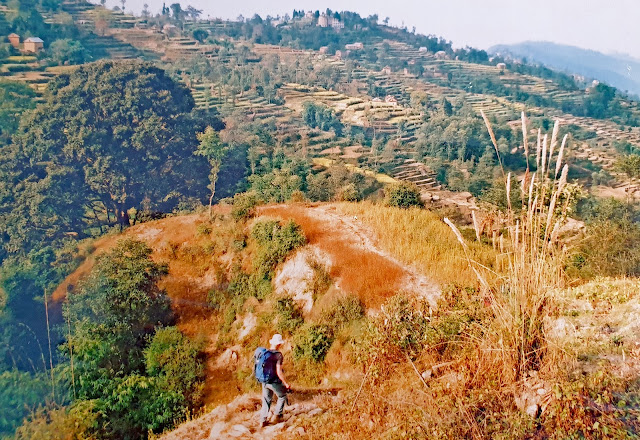 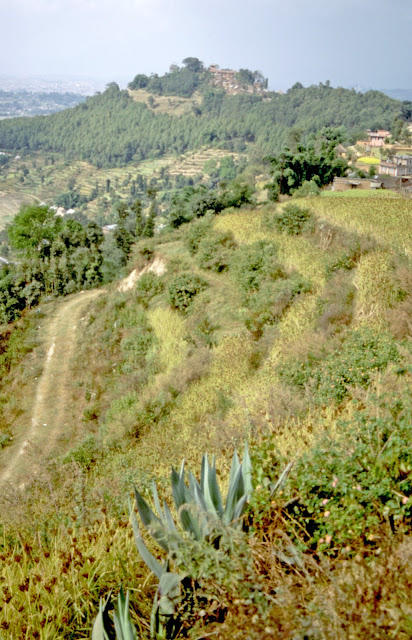 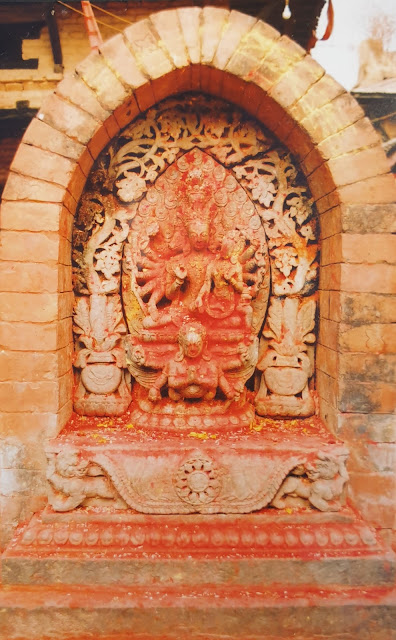 And so, by 11:30 we are at our destination, Changunarayan - an ancient site with a small bus park (we have had a traffic free morning on nice paths) and lots of adoring visitors. Only a handful of westerners here, so we get hassled to buy things. That is actually stopping me from buying anything! The slight disappointment of the shortness of the walk was soon forgotten when it started to spot with rain for the second time this trip, the first being yesterday afternoon. So we headed back to the old minibus - an ancient, leaky, turquoise beast - for the 30 to 40 minute drive back to the luxuries of the Radisson Hotel.

Before Mahesh left us we gave him a 1500 rupee tip (£25) and the old UNO cards - he had enjoyed last night's game and seemed pleased with this.

Then a lazy afternoon - first we all meet to consume our packed lunches, than we laze in baths/sauna in front of TV whilst the rain falls outside. We pack our bags in preparation for tomorrow's departure.

Then downstairs to meet Andrew, who is in the midst of a Japanese briefing session! before a short 15 minute stroll, avoiding mud and puddles, to the Chimney Restaurant at the famous Yak and Yeti Hotel. This is an old converted palace and is a magnificent building. The food was excellent, served by white-gloved waiters, enjoyed in the company of a Canadian couple from . It was her 30th birthday and the superb cake was shared with us. They had been up beyond Everest Base Camp, a tea house trek in good weather - with just one porter - to carry her pack. Very sensible, we thought.

Back in time for bed by 10 pm, after a stroll through light rain, to the disappointment of the taxi drivers.