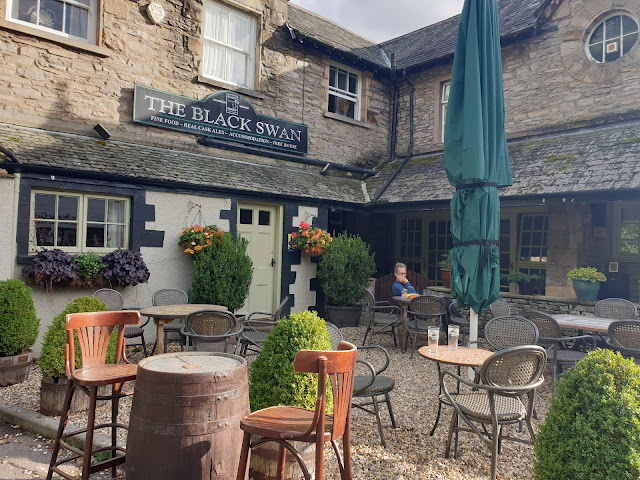 Breakfast at the Black Swan, under a horned rabbit on the wall, was sedate and tasty. Cary had a huge waffle and I enjoyed scrambled egg on toast.
We started, around 9am, past the King's Head, sympathising with those residents who may still be waiting for their breakfasts due to the chef shortage.
It stayed dry, under overcast clouds, for the first hour or so, during which we had good views from Ravenstonedale Moor back to the Howgills, and ahead to the Lakeland fells. 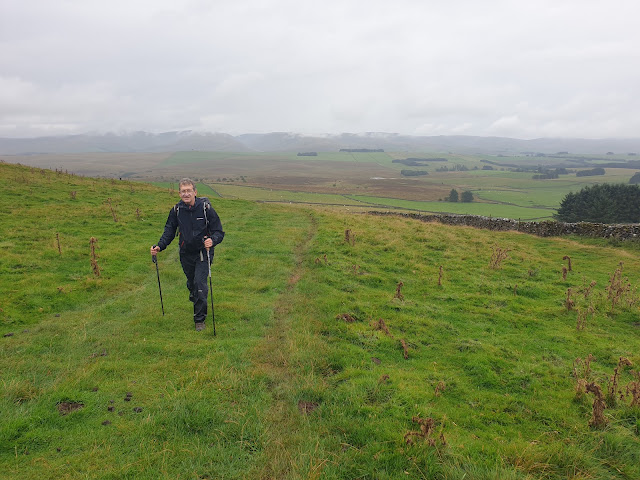 Then it rained, mostly drizzle, for the rest of the morning. On the road out of Newbiggin we had witnessed a brutal wasp attack on a much bigger moth.
The path should have offered stunning Lake District views, but those were somewhat muted in the moist conditions. 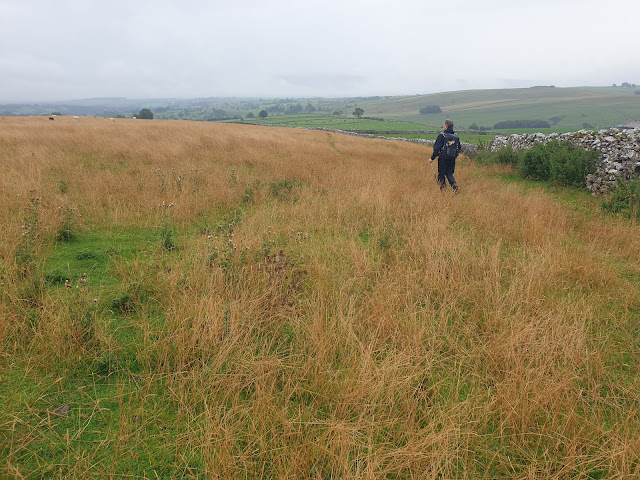 We met a group of four Americans on a coast-to-coast walk, a lone mountain biker, and a few wet looking folk under umbrellas. Blue scabious flowers had sprouted in the grass beside the track.
Elevenses were taken on wet grass in the rain.
During the long descent to Great Asby, we passed a farm at Clockeld that seemed to hold generations of old tractors. Here's just one of them. I'd guess it must be around 55 years old. 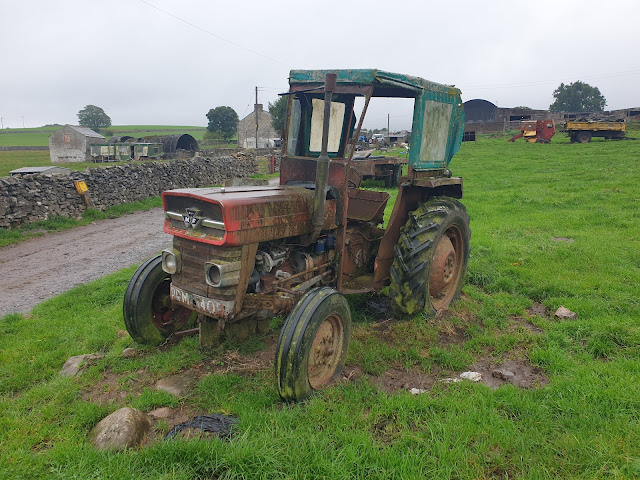 Wheatears and a wren were noticed today, as well as a few herons, grey wagtails, and several large accumulations of mallards.
Lunch was taken in Great Asby's spacious bus shelter that doubles as a place to exchange secondhand books, tapes, etc, etc.
Sadly Cary had minimal lunch with him and the nearby pub was shut, so he had to make do with some of my old peanuts. Stomach ache followed. 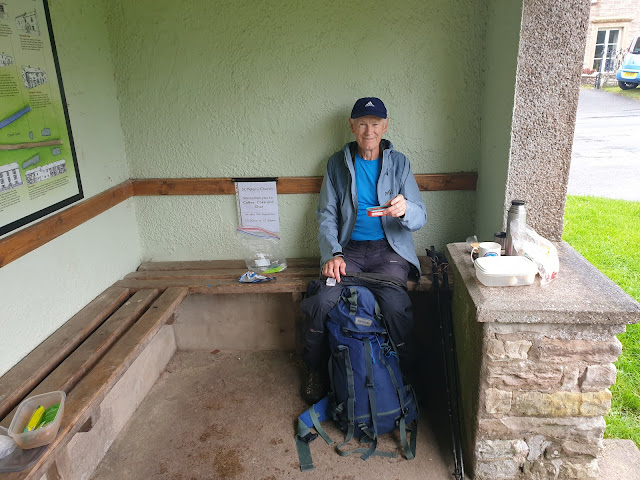 The drizzle continued all afternoon, but I removed waterproofs and Cary kept his on. We were probably equally damp by the end of the 24km walk, though sections of wet vegetation didn't help my cause. 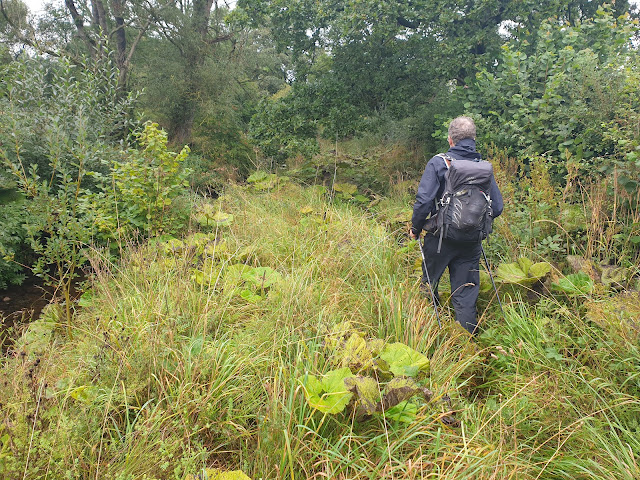 Rutter Force is now only available to be admired from a distant footbridge, the mill by the Force having been converted into holiday cottages with their own private views. 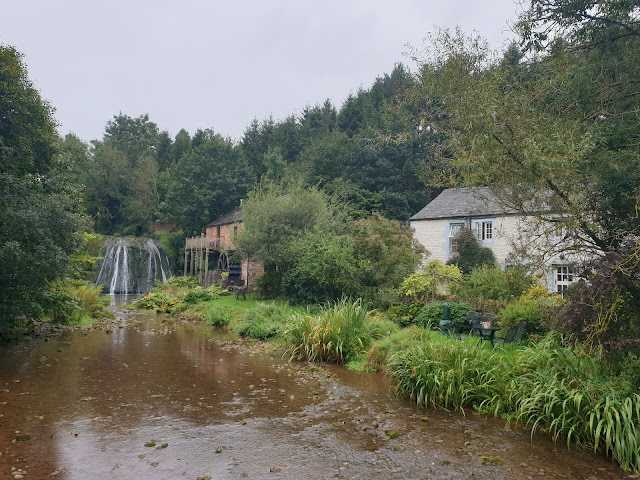 Our walk continued beside Hoff Beck, past hundreds of mallards, to Bandley Bridge. 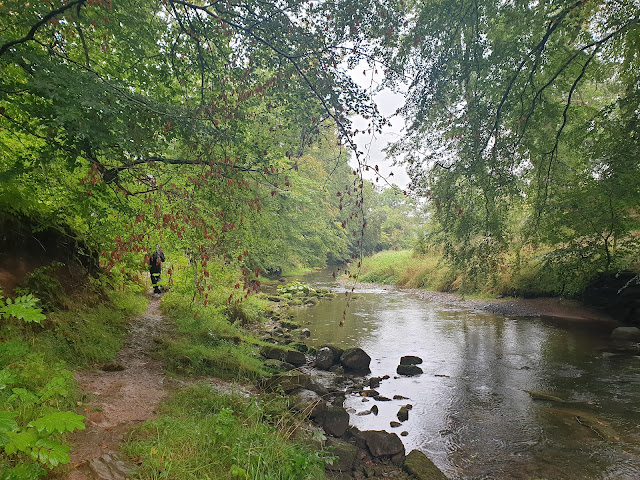 From here I sauntered through Rachel Wood, expecting Cary to follow. He didn't. I returned to the bridge and met Nikki and James, who we'd seen in the pub last night. Between us, we found an obscure stile that put us on track for the rest of the walk into Appleby. Nikki and James, from Shropshire, had spent six days on the DHW starting in Ilkley.
Cary arrived at the Crown and Cushion at the same time as me and we celebrated our most successful venture with hot chocolate after today's 7 hour walk and a total distance from Saltaire of nearly 100 miles. 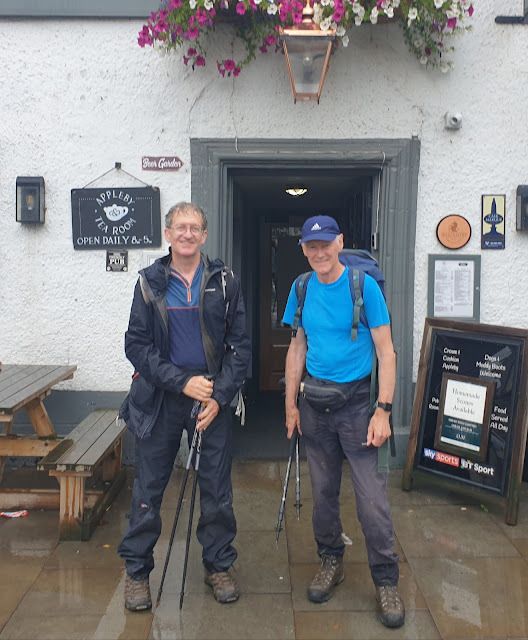 Since then the Queen has died and we've enjoyed dinner in the pub after a foraged starter of puff balls and field mushrooms in Cushion Cottage, a two bedroomed house full of mod cons next to pub - our home for the night.
So that brings our eight day walk to a successful conclusion, subject to a scenic train ride home in the morning.
Posted by Phreerunner at 22:00

A splendid and well organised walk - getting accommodation booked for the whole trip is not easy.

I agree a great week's walk, I'm jealous.
I remember when one could set off on a long-distance walk, maybe outside school holidays, and find accommodation each night as you progressed. No longer, a lot of the little, often run by an old lady, B and B's have disappeared, and the hotel spaces have become expensive retreats for the 4x4 brigade. Things will get worse as hotels start to go out of business in our present economic crisis.

The tractor is an MF 100 series which we launched in 1960 so your not far out at 55yrs old. It’s a 2wd model. Probably a 135. The cab looks like it’s an old Duncan cab made in Nigg Aberdeen. They might still be going.

Thanks for the comments. A 'tractor' posting will follow soon.

BC - Cary booked all the accommodation just a few days before we started the walk. Surprisingly, one of the most expensive places was the YHA at Malham. We didn't have a budget, and we ate and slept well. The 8 night trip cost us each about £800, and we didn't need to buy any new equipment.

It’s time the YHA name was removed because it’s misleading.

Times move on. I see no need for a name change. Lots of youths use the hostel network. Rentahostel is also excellent for groups.

I'm a little behind! Just caught up with your DHW adventure. Finding out what you're currently up to in Wales (I think you're still there?) will have to wait for another morning - the hour of day is suggesting that we should be out doing something.