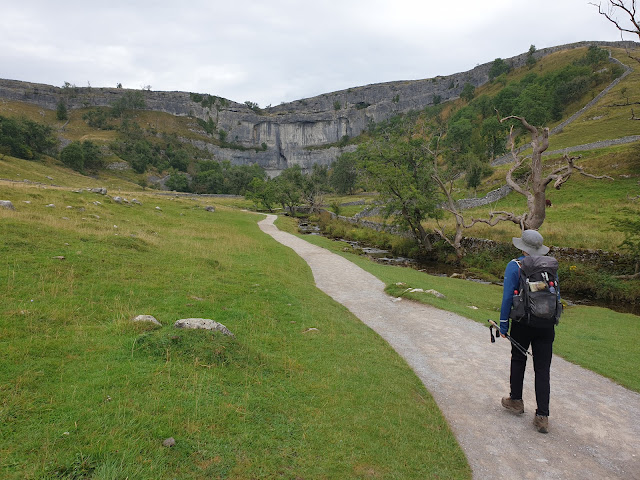 Malham YHA was an adequate place to spend the night, especially as the rest of Malham was fully booked when Cary did the bookings last weekend.
We set off around 9:30 and after a few seconds stopped to chat with a group of Danish fellrunners outside the Lister Arms.
Passing Beck Hall, it looks as if the ambitious plans the owner once showed us have come to fruition.
The well used path to Malham Cove was pretty much deserted. (See above.)
Grey wagtails, as usual, flitted in the shallows below the towering cirque of the cove. House Martins feverishly hoovered insects. Here's the view back towards Malham. 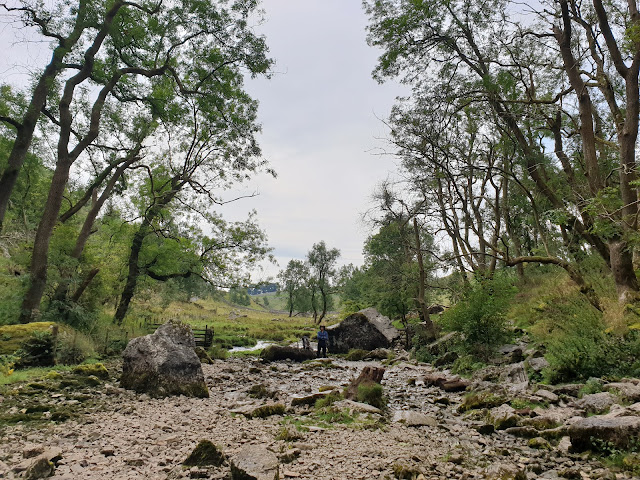 Some climbers were on the face of the cove, perhaps checking bolts? 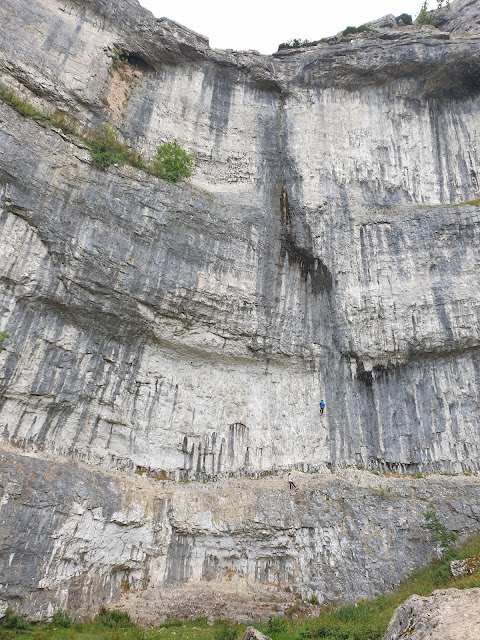 There were a few people struggling to cross the limestone pavement at the top of the cove. Beyond here, we rejoined the main DHW path after our diversion to Malham.
It had started overcast, after overnight rain, but as we strolled towards Malham Lings, the sun came out and Drone Age Man, sounding like an exhausted lawn mower, lurked above us. 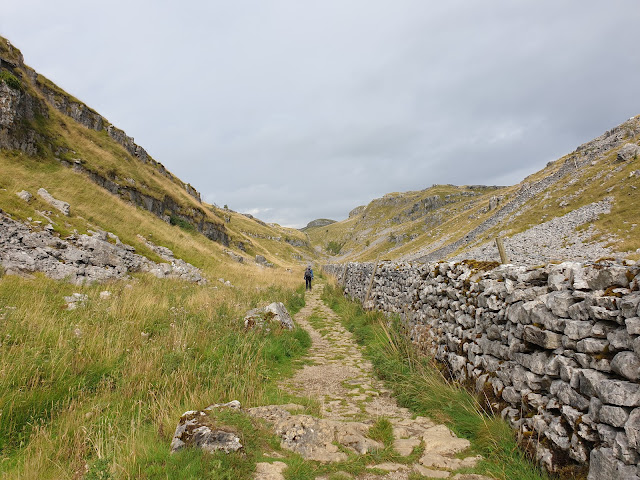 After passing Langscar Gate, we rose gently, past harebells and eyebright, to Nappa Cross, an ancient artefact that has been restored. 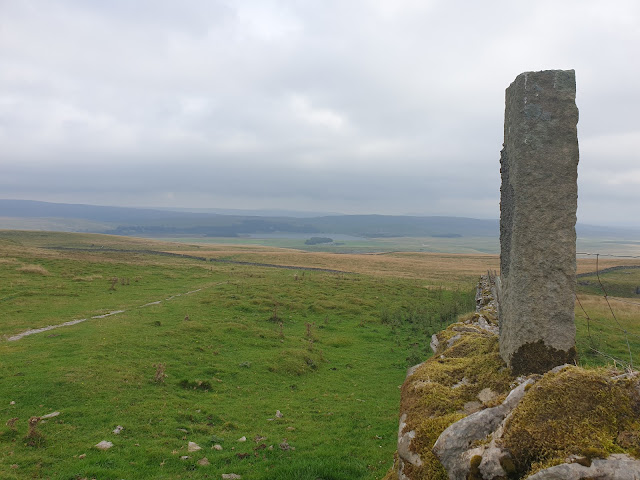 There were more mountain bikers than pedestrians on this section to Settle. Plus a flock of agitated crows.
As we neared the town, we heard the distinctive sound of a steam engine, and admired it as it flew past. 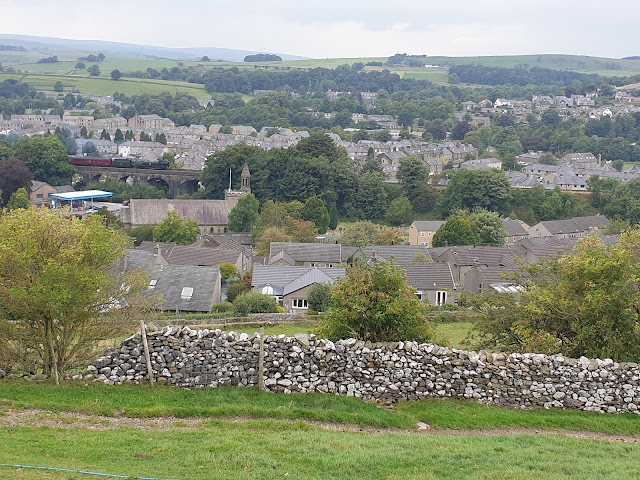 We entered Settle, full of bikers, restocked in a Co-op and savoured a late, leisurely, baked potato lunch in the Naked Man Café.
Leaving Settle to reach the riverside path to Stainforth, we noticed that lots of properties were adorned with flower pots, from the town's annual Flower Pot Festival. 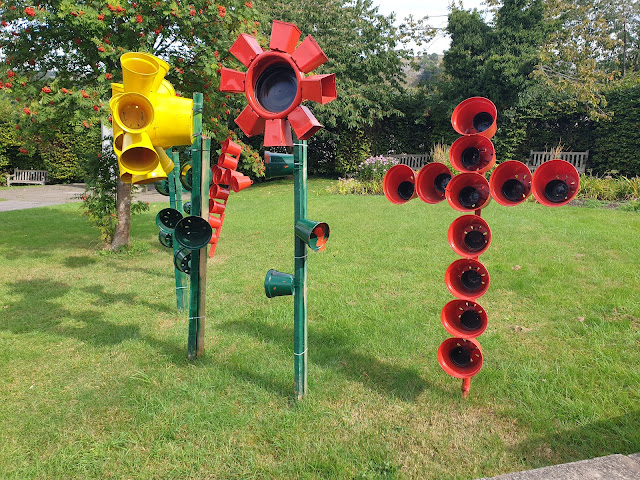 Rain was forecast, but instead the sun's strength seemed to increase. We pootled up to Stainforth Falls, which don't amount to much in the current dry weather. 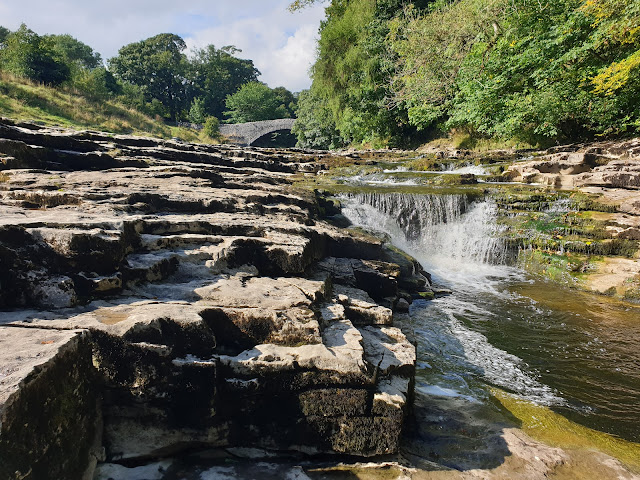 Stainforth village is pretty enough, with our home for the night, the Craven Heifer pub, being near the centre.
Last orders for food on a Sunday here are at 4:30. At least we arrived in time for that, but given our recent lunch, we ordered sandwiches that could be eaten later. The place has a Fawlty Towers air about it. 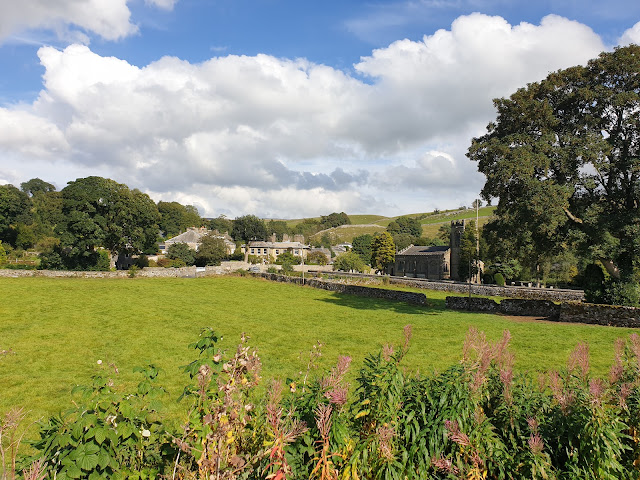 Today's walk was 12km to Settle, then 5km to Stainforth, with no serious hills. It took us about five and a half hours.
Posted by Phreerunner at 19:00

AlanR. Hi Martin, just caught up with your walk. Good to see you out and about. I haven’t done the Dales high way or low way for that matter, even though it’s close to home. I fancy backpacking it. Looks like you will be a bit heavier by the time you get home with the cakes etc.

Hi Alan, it's good to hear from you. It's a nice walk, not too demanding, and easy going with a light sac.