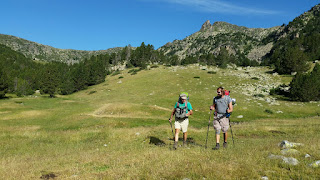 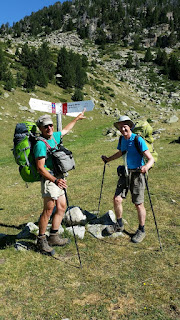 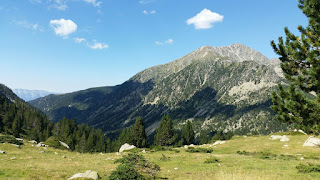 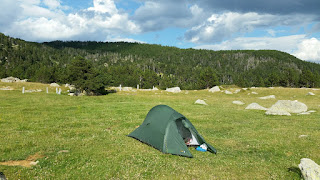 I couldn't have spent the night in a better place. Twelve hours undisturbed sleep without any serious medical incident was just what I needed. But I was still short on fuel when I joined Tobi and André at the bothy to continue our stravaig.

I knew I'd be slow up the hills, and I was. Not that it really mattered as we reached our planned destination a little after beer o'clock, 4 pm, which was fine. I've elected to have a restful evening with snacks on the campground, which I've now discovered is also pasture for an orchestra of cows, whilst the others have chosen to sleep and eat in the Rifugio.

We started, briefly, in fleeces! The sun soon burst through a layer of high cloud, creating a perfect blue sky before some cumulus rolled in to give us a day of sunny periods.

At first I was able to keep up. It was largely downhill back into Spain to Cabana dels Esparvers on easy ground through a rocky landscape with dwarf pines. Up to this point we had kept pace with a friendly Dutch family who are walking part of GR11. They are even slower than me, so despite my slow pace up the 700 metre climb to Portella d'Engorgs (2680 metres), I was there long before they were.

The ascent was preceded by a signpost that said Cap de Creus 233 km. So we are nearly three quarters of the way across GR11. Later we met a middle aged French couple coming the other way. It had taken them three weeks, including a short cut by train. They had classic teenager backpacks, with bits of kit hanging off everywhere. My rucksack is in a minority of one, having no such adornments apart from around the hip belt and on occasions that I use the solar charger.

I was very slow up the hill, with plenty of time to appreciate the jingle of the many cow and horse bells and the choughs of the resident bird population. A shepherd was moving steadily up the hill, sprinkling the contents of what I imagine was a bag of salt on the rocks for the cows to lick.

Meanwhile, Tobi and André had shot over the pass and were happily waiting for me at some lunchtime lakes in beautiful surroundings. André was wandering around a bit like Sue does - in search of the perfect flower picture. He was seeking out giant examples of carline thistles, columbines and orchids to take home on his memory card.

After passing the unmanned but clearly occupied bothy called Refugi Engorgs (pictures of the interior could be of any Scottish bothy), we enjoyed a lovely traversing path, not without the occasional tree or rock obstacle, that climbed past huge clusters of harebells and hellebores to a low pass before the easy descent to the roadhead refuge on whose campground I'm pitched. They have charged me €4 for the privilege. The hot shower was both needed and welcome. I hope my recovery will be incident free overnight. Stomach upsets can (and did last night) lead to mishaps!

Today's pictures:
Descending into Spain
Only 233 km to go
A view from the afternoon belvedere path
Campground (before the cows, who soon moved on)

I've still no data coverage with EE/Orange, but I managed to send yesterday's posting using Tobi's phone as a hotspot. I noticed a few comments but the contents didn't download, so I'll try to reply to those later. Keep them coming. They are appreciated.

Glad you're feeling better. It looks lovely where you are. We had a lovely day today. Jacob went on the Junior Go Ape with Sue and he was absolutely fearless-Sue had trouble keeping up with him! You'll have to do it with him sometime. He's with Sue for a sleepover. Hopefully he's tired enough to sleep until after 6!

A signpost to your destination is a boost! Have a restful day off tomorrow, and have a go at replenishing the glycogen reserves. Do you remember eating whole baguettes for lunch in two sittings at this stage of the HRP? I'm off to bed now in case my small guest wakes up early. Hopefully our boules in the garden, as well as Go Ape, will achieve a long sleep! Sx

Thanks you two. I will have to take Jacob on Go Ape, and take him wild camping...
We had a lovely evening here in Puigcerdà on André's last night, and I even ate a modest meal!