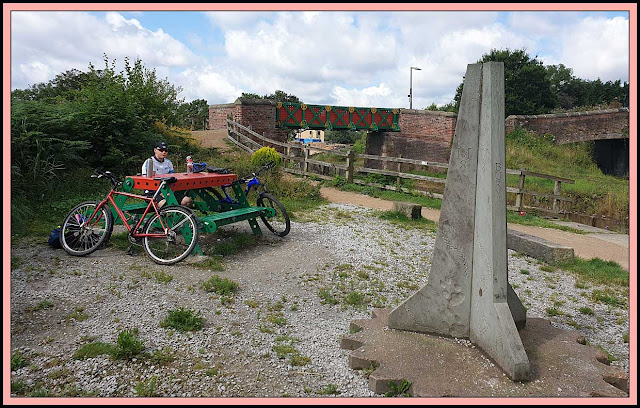 Today my 'Monday Morning Bike Ride' was reinstated thanks to Paul B's willingness to join me on the pleasant route up to Bolton, across to Bury, and back home through Salford.
I first rode this on 10 June, the full record of which, including a map, is here.
I took very few pictures this time, although it was a very pleasant day. So good for cycling that we didn't stop much. We again eschewed the attractions of Starbucks in Bolton, preferring a Meccano picnic bench at Nob End for our elevenses break at the half way point.
Paul is munching on a very chewy bar, btw, not puking into my flask! 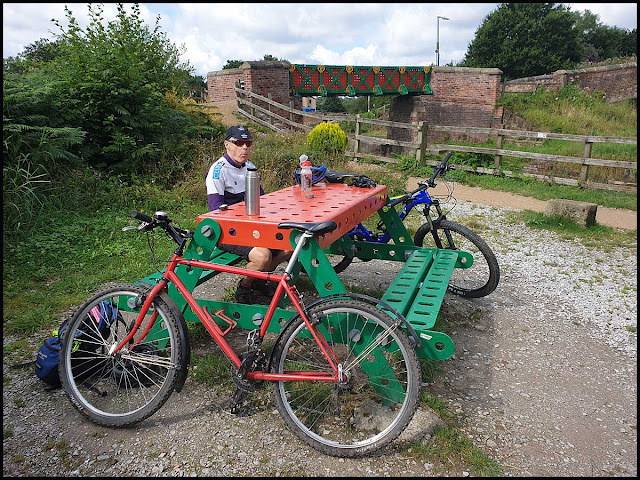 Those were to be today's only photos, but I felt obliged to take the next one, which shows a small part of the massive flood defence system for the River Irwell in Kersal. It's empty apart from a few puddles. 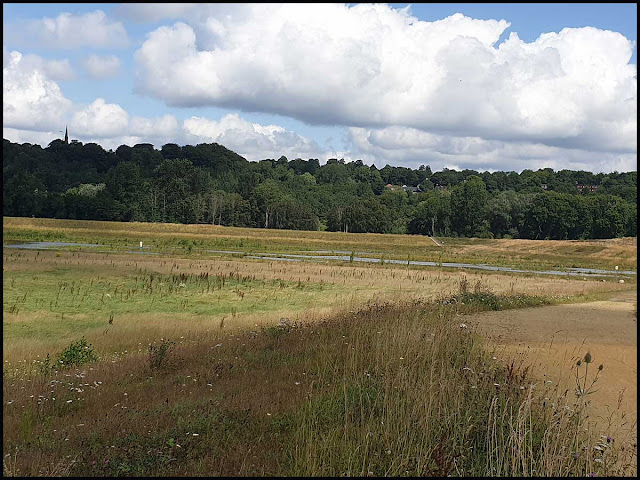 So why wasn't that area used to protect the Castlefield Basin from flooding when the Irwell escaped from its banks and flooded the Bridgewater Canal in the rain last weekend?
"It's a mystery" offered Paul as we looked down to the Irwell. 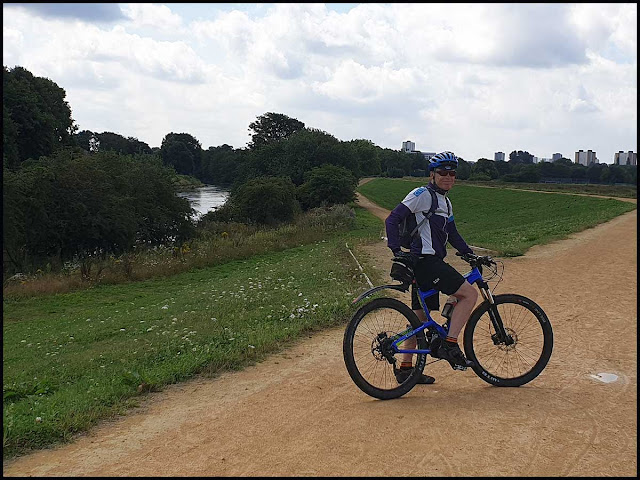 A little further on, one of several footbridges over the meandering river was being refurbished. It actually looked as if it is being rebuilt. It always seemed ok to me, but maybe there were structural issues. 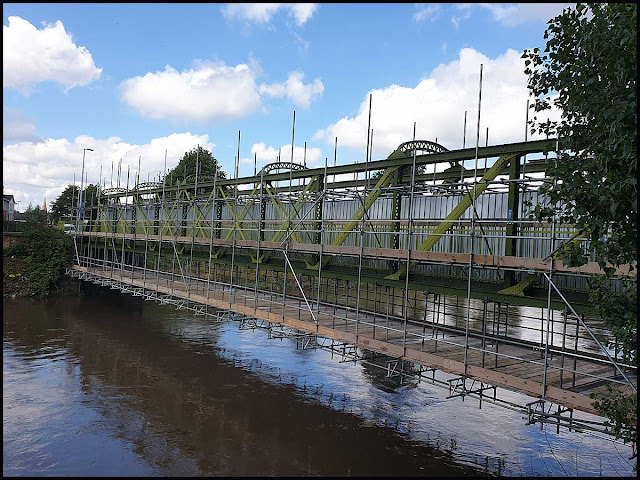 This time I found my way through Salford by the correct route, despite the paucity of cycle lanes and signs, which I hope will reappear once the road works in the area have been completed.
We took about four and a quarter hours for the 58 km route. I used two Garmin gadgets, one of which showed ascent of 246 metres, whilst the other showed 335 metres. Hmmm.
The bikes needed a good wash after negotiating the muddy towpath in Salford where it had flooded yesterday. My mudguards were very useful today.
Thanks for your company, Paul. I'm not aware of any enthusiasm from others for Monday morning rides during the holiday season, so I'll be going out on a more ad hoc basis. Let me know if you'd like to come along sometime, or do one of the regular Monday morning routes:
Starting from Seamons Moss Bridge:
A Moore Lane Circuit - 50 km
Phoenix Park/Trans Pennine Trail (TPT) - 60+ km
Starting from Timperley Bridge:
Pennington Flash/Mucky Mountains/TPT - 74 km
Bolton and Bury Circuit (today's route) - 58 km
Bury and Middleton - 70 km
Fallowfield Loopline and the Cheshire Ring - 50 km
Trans Pennine Trail and the Cheshire Ring - 60 km
Posted by Phreerunner at 21:23

I reckon Bury must be a sad place at the moment with the potential demise of their football team.

Yes Conrad, both of the supporters have sad faces just now.

Two Garmon Gadgets? Are you testing out a new one?

One gadget is semi broken, the other is its replacement. I may explain in a separate posting.