Day 8 - Monday 2 August 2004 - Stage 7
Postcard Summary
Cowbell camp to near Bagargui Col
Superb mountain day with inversion and peaks – 11.5 hours, 24km, 1100m ascent
A very long day, especially as the expected gite at Foret d’Iraty () was full, so we had to walk 3 km extra to a campsite. 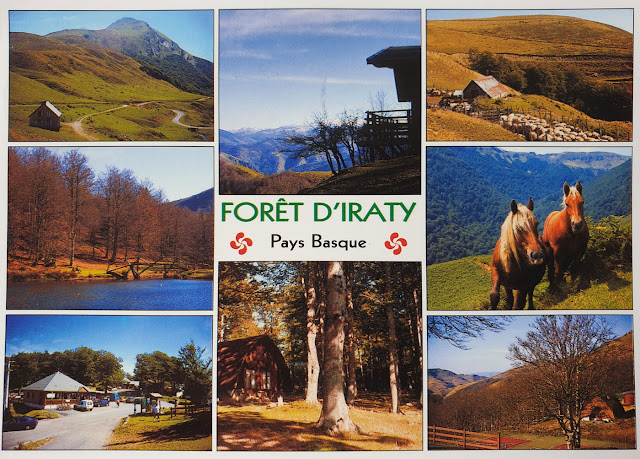 Diary Entry (by Sue)
This was a really long day - diary written Tuesday evening.
We were away from our camp under overcast skies by 8.10 am. Arriving at Col d'Orgambidé we were greeted by the sight of cloud over and in the valleys close to us. 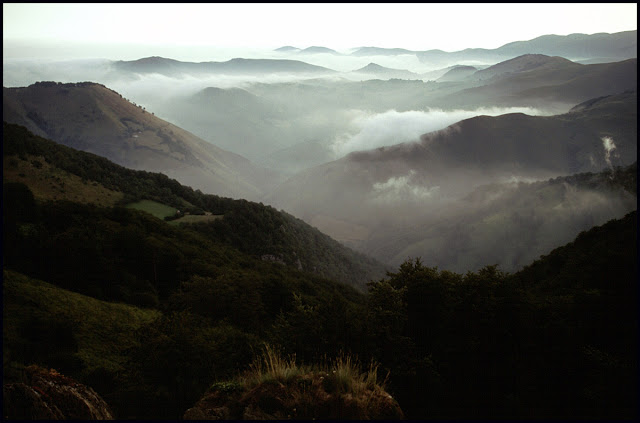 As we walked along the broad crest (to avoid a road walk then a big ascent), the cloud rose, filling the valley to our right, and lapped over us slightly, with its odd scent. The hill was covered in blue thistles (Pyrenean Eryngo). Our route followed the border, but we contoured round below the crest in a search for water. We found a source, which was drips that gradually filled the bottle/cups.


Once round at Col d'Errozaté, this was boiled to make an excellent cup of tea. The cloud had receded from this point and we watched a shepherd use his dog to round up some geese. 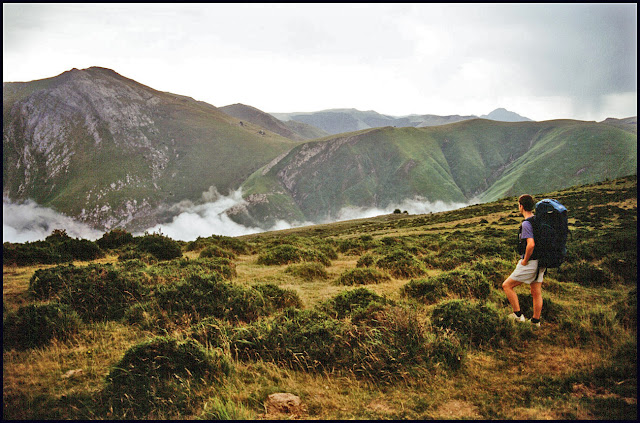 The route then used the road to zigzag high onto a hill, at the foot of which we deposited rucksacks behind a rock, and climbed for about 10 minutes to the 1345 metre Sommet d'Errozaté. La Rhune could be seen in the distance rising out of mist, but now much more prominent are the jagged peaks we are heading for.

After this, a slight struggle with navigation, but at 1pm ish, we arrived at the bottom of a depression, with a lovely stream running through. A long break for tea and tuna and washing of ourselves and clothes was welcome. The stream was cold and clear, and lots of blue iridescent dragonflies buzzed around its surface.

Sadly, this idyll came to an end, with a hot ascent of Sommet d'Occabé (1466 metres). The GR10 met our path here, and was marked with stone marker posts with 'GR10' in big letters - no rocks here to paint red and white. 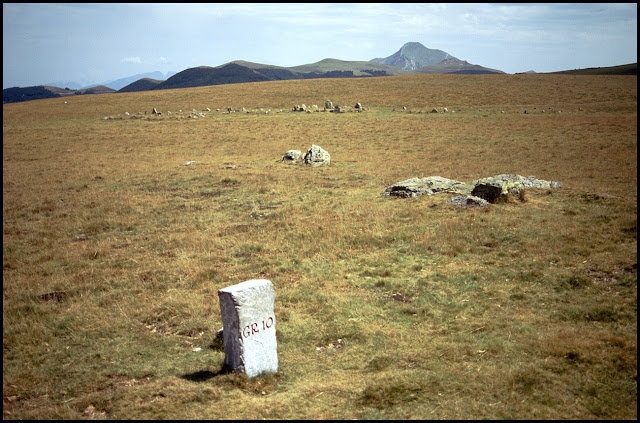 The track passed the Cromlechs of Occabé, ancient stone circles. On the ascent, we met a young couple doing GR10, who described their intended campsite near chalet Pedro - we intended to go further.

The descent of Occabé was initially over open ground, then down a steep track through woods. The weather typified the whole day - one minute the sun was out and it became sweaty work, the next minute drops of rain were falling. For most of the day showers could be seen falling from grey clouds in one direction or another. At the bottom of the descent was chalet Pedro, where we arrived just before 5 pm.

After a couple of drinks, a decision was made to continue to Chalets d'Iraty, where it was suggested there was a shop, restaurant and refuge. Continue we did, first in sun, then on the edge of a storm, with thunder rolling. This last section was over two more hills, which had a couple of chalets at the top.

Then, another 700 metres down the road to find the reception shuts at 7 pm (it was just after that). When we did find somebody to open reception, there was only one bed available. The restaurant d'Iraty provided an excellent meal whilst it poured outside. Soup paysanne, a salad with meat and croutons, lamb and our usual pudding of cheese and jam, fortified us for the 3 km walk, starting around 9 pm, to the campsite down the road.
It was by fluke only that our waterproofs remained in the rucksacks today. Pitching the tent in semi-dark was managed quickly due to midges. No reading or diary writing, just sleep.


Heard the loud shriek of an owl in the woods.

Back to Start
Next Posting
Previous Posting﻿﻿﻿
Posted by Phreerunner at 22:26