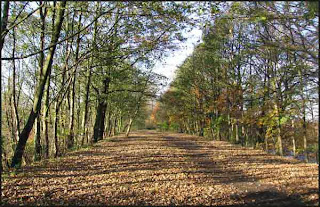 I wisely brought forward today’s evening walk by six hours, so instead of enjoying my own company in the dark, I had a lovely 12 km stroll on a sunny autumn afternoon.
The £3.20 Metro journey to Eccles gets me there in 40 minutes from Timperley, so this really is a fairly local walk. A full description of the route is here, the footnotes from which are reproduced in the Notes below.
The walk starts along urban roads before entering the quiet sunny woodland of the well-named Broadoak Park, where the old railway (see Note 1) heads over the long embankment pictured above, and then through cuttings towards the gathering roar of traffic on the M62. On this occasion the chirpy blackbirds and robins were making a good effort at drowning the unseemly noise, with mallard, goldfinches and other residents helping to maintain the woodland atmosphere.
Then, beyond the tunnel under the motorway, the junction at Roe Green (see Note 2) brings the railway section to an end, in favour of a woodland route past antique cottages, eventually leading to the canal basin at Worsley where the area around the Packet House (see Note 3) would have been a hive of activity 200 years ago. It is still active as a leisure facility, and a pleasure to walk through.
An open section of canal leads back to the urbanity of Monton and Eccles, and a squashed tram journey back home.
The paths were quiet today, but dog walkers, joggers and fishermen were all about, enjoying the peace of the countryside within Greater Manchester. Those who wanted more crowded company were no doubt crammed onto nearby golf courses! (See my 1 October entry.)

Note 1: The former London and North West Railway Company Ltd was officially opened on 1 September 1864, and helped to provide a link between Eccles Junction on the Manchester/Liverpool line and Tyldesley Junction on the main west coast line. The former Monton Green station was opened in 1887 to cater for commuters to Manchester and Liverpool. Traffic included everything from coal, to David Brown tractors from their Leigh factory, to holiday specials to Blackpool.
The line was finally close to all traffic on 5 May 1967 by British Rail.
Since the 1980s the line has been progressively reclaimed and now forms an integral part of the Salford Loopline network of ‘Strategic Recreation Routes’.
Wildlife abounds on the loopline, where the steep sides of the embankment were originally planted with sycamore and beech, since when oak, ash, rowan and birch have joined the party. Dog Rose, Blackthorn, and the Common Blue Butterfly are residents here. Keep your eyes open for kestrels, woodpeckers, yellowhammers and foxes, as well.

Note 2: Roe Green junction is where the Eccles to Wigan (1864) line met the Worsley to Bolton (1870) line. On 28 March 1874 the local paper reported gleefully that…"the long looked for new line between Bolton and Manchester on the London and North Western system will be opened for traffic and will meet a great public requirement by the supply of additional means of railway with the busy cottonopolis.”
[Given my squashed journey home, the modern day analogy is the ‘great public requirement’ for more tram units during busy times, and no doubt an extra lane on the M62 that would further decimate the woods.]

Note 3: The Packet House was built in the late 18th century as separate dwellings, a mock Tudor frontage being added later. From the stone steps in front of the Packet House travellers were collected by the Duke of Bridgewater’s packet boats for journeys to Manchester, Warrington and Runcorn. The golden age of the canal ended with the advent of the railways on the disused lines of which this walk starts. So whilst the canal would have been a hive of activity 200 years ago, whilst today it is more of a recreational zone, it still works and is full of water, whereas the railway lines are long gone… 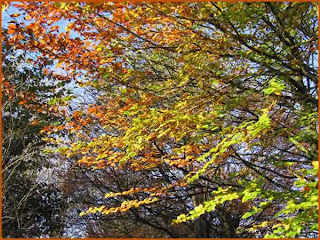