It was a lovely day, so after an early lunch I went for a walk from New Moss Wood, by Cadishead. I’d never been there before – it’s not far from home but one of those places I never seem to have ventured to.
I started at 1.20 in bright sunshine, up a seemingly endless tarmac road, stretching far into the distance.

It was a no through road; the only car I met was a 4x4 with a lady walking her dog the lazy way. A couple of joggers were the last people I saw for over an hour. Occasional single storey residences littered the potholed route, some constructed of barge board or concrete, with corrugated iron roofs. Woolden View Farm was one of these – a small blue and white building with an iron roof. Horses stood motionless, as if glued to the spot by the frost.
The land is flat around here, and fields of bright green turf shone in the sunlight.

By now the motorway noise was quite noticeable and before long I was passing above the speeding vehicles on the M62.

Beyond here, past frost laden ploughed fields, at Ring Pit Farm, the potholes ended and a firm grassy track continued to the edge of Little Woolden Moss.
Blackbirds and Robins chirped noisily.

I was soon completely alone, confronted by what looked like a soil quarry. 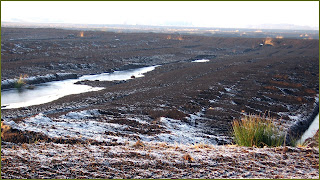 The path marked on my maps had long gone, so I followed a sign to the left that led through a sliver of woodland, thick with frost laden bracken, between the Moss on one side and lush farmland on the other side. 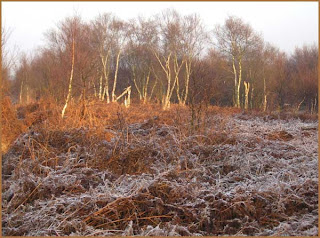 Continuing along the marked path I approached the vicinity of some heavy earth moving equipment with obvious road access. Without my GPS (carelessly forgotten – it’s always a boon when exploring the flat Cheshire countryside) I was unsure as to my precise location, so I decided to ‘stay rural’ and return through the narrow strip (unmarked on the map) of woodland, all the way back over the M62, to turn right at Oakwood Farm, where collared doves fluttered in the breeze. On the way I met a woman with a dog, curious as to the reason for my presence. “Bird watching?” “No, but I did see rabbits in the frost glazed earth of the Moss.”
Past some houses, I soon turned left down the ‘Glazebrook Timberland Trail’. 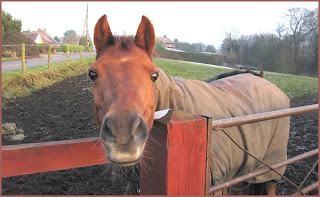 Friendly horses trotted up to me, and there was a nip in the air, with frost everywhere, as I strolled south beside Glaze Brook, with the yellow orb dipping into mist on the western horizon and beautifully silhouetted trees in the late afternoon sky. 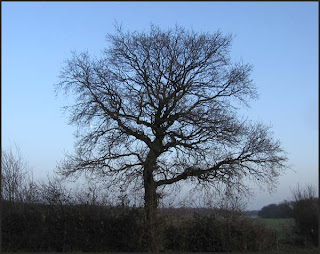 A left turn beside a hedge on an obvious if unmarked path led me back to a leap across a ditch to enter New Moss Wood for the last lap of this short walk. Finishing at 3 pm, it had taken about an hour and 40 minutes to do about 8 km.
I don’t think I’d repeat this route, but it was an interesting minor piece of local exploration! 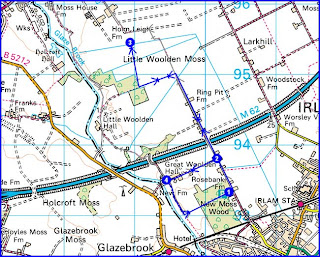